When Ludwig Mies van der Rohe said that less is more, he was talking about the virtues of design restraint, but not necessarily minimalism. After all, his greatest work may be spare, but it's far from sterile. Among the hallmarks of his projects, which have often been emulated but rarely matched, are high-grade materials, rich detailing, well-considered sightlines and no small amount of flair. This kind of understated opulence, valuing quality over quantity and comfort as well as chic, may look, well, simple, but it can be challenging to pull off well. Three residential designers who have mastered the style – New York-based Sandra Nunnerley, Canada's Elizabeth Metcalfe and Suzanne Kasler of Atlanta – explain how they merge the sumptuous with the spartan to stunning effect through palettes, texture and those all-important details.

The power of palettes

When it comes to devising a room's colour scheme, vaunted New Zealand-born designer Sandra Nunnerley cites Mark Rothko, the abstract-expressionist painter, as her muse. For many years, Rothko's mesmerizing canvases featuring colour blocks that bleed into each other have offered limitless inspiration. Nunnerley especially likes the paintings' luminous yet mutable quality – how the colour black, for instance, can lighten or darken depending on the time of day. It leaves her feeling "ecstatic and energized," she writes in her new book, Sandra Nunnerley Interiors, published by powerHouse Books. The chapter in which she reveals this is titled Subtlety.

This same chapter showcases a master bathroom that, like the Rothko on which it was modelled (Untitled, 1969, a canvas of diluted greys and lavender), is stunning in its simplicity. Around the tub in the space, a waterfall-like assembly of mosaics cascades down the walls, providing both the requisite splash guard and an emotional, even sensual lift. "Colour," Nunnerley says, "unlocks all sorts of feelings."

Another palette trick of hers: lacquered surfaces. "I love the light quality that reverberates off lacquered walls," she says over the phone from New York. "Lacquered walls are very magical at night – especially when candles are lit – and they're a great foil for mohair and silks and wood." Colour-wise, she prefers to see them in neutral shades. "Lately, I have been drawn to creamy ivory, pearlized oyster and shimmery grey," Nunnerley says, adding: "They have that subtle sheen I love."

Deer-antler chandeliers, rustic decoupage dressers, sponged walls. In the design world, shudder-inducing fads come and go, but rich interiors that can manage to feel both comfortable and clean are always in style.

"For me, it's all about editing and removing anything that is not necessary, so that the simplicity of the design is what you really focus on," says designer Elizabeth Metcalfe, who operates her eponymous firm in Oakville, Ont., and favours elegant, layered interiors where a mix of classic and contemporary furnishings, a range of finishes (soft and hard, painted and reflective) and a host of textiles co-exist against a neutral backdrop. In particular, "quality fabric speaks for itself," Metcalfe says, "kind of like a little black dress cut perfectly out of beautiful cloth."

But how to combine such disparate elements? Besides a willingness to experiment and the patience for trial and error, a key requirement, Metcalfe says, is an appreciation for contrasts. "To make a room interesting, I always put opposites together," she says. "I'll put something soft against something rough, the horizontal with the vertical, the opaque with the translucent."

This technique has been exercised to glamorous effect in a recent project of hers: a condominium on the shores of Lake Ontario, where contrasting materials and patterns engage but don't overwhelm.

In the unit's bedroom, for example, a pale palette of oyster, watery blue and soft greys is the very picture of serenity, while vertical panels filled in with damask wallpaper draw the eye up to the ceiling and add yet more visual interest.

"To give the room a lift and some sparkle," Metcalfe adds, a mix of white metals, including polished nickel sconces and mirrored chests with silver-leaf details, were also incorporated.

At the same time, the variety of textiles in the room – a Belgian linen headboard, cotton sheets, mohair velvet cushions and silk drapery – coalesces nicely, appearing both plain and posh. One final flourish – a subtle repeated X detail, seen in the headboard, pillows and chest – is also discreetly eye-catching.

In the living room, meanwhile, a similarly effective blending can be seen in a single yet significant element: the wall-to-wall media and fireplace unit, which boasts a lacquered finish, floating glass shelves, mirrored doors and a polished Calacatta marble slab around the fireplace.

"Because we live in a world where there is so much stimuli, most people, when they come home at night, like to walk into a home that is calm and serene and a little quieter," Metcalfe says of her demure-yet-decadent assemblage, which may not be as showy as, say, an enormous faux stag's head over the fireplace, but that's probably a good thing. Isn't it high time to buck that trend?

Besides "less is more," the Miesian axiom that people recall most is: "God is in the details." And it's one that Suzanne Kasler couldn't agree with more.

The celebrated Atlanta-based designer, whose second book, Timeless Style, has just been published by Rizzoli, is a consummate perfectionist when it comes to the little things that make a room shine. In the book, she rhapsodizes, for example, about the craftsmanship evident in her own kitchen and especially "old-fashioned details like the little lip on the island's marble top, [which] reminds me of something you'd see in a Parisian pastry shop." Over the phone from Georgia, she also enthuses about the plasterwork in the hood over the stove and the "beautifully made CornuFé range [itself], almost like a piece of jewellery trimmed in chrome and brass.

"That," she says, "is what I think of when I think of luxurious minimalism."

Appliances aside, Kasler also considers a room's bones a key opportunity for the detailing that can really make a space special. "I trained in interior architecture and I always stress this when I talk about interior design: If you can get the architecture right, you need less decoration.

"People don't want overly decorated houses," the designer insists. "They want the luxury of special finishes and textures and comfort." 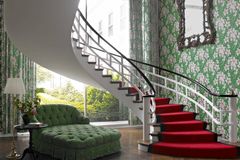 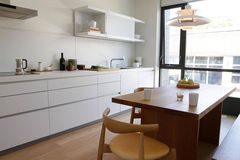 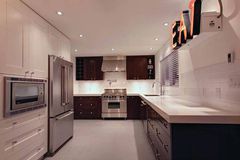 Surrounded by windows, this room gives Chantal Levesque ‘a relationship with nature’
May 11, 2013