Trina Romanchuk Brandon has spent more than three months searching for the perfect bedroom mirror. The hunt, which involves weekly shopping trips and continual checking on Craigslist and eBay, has already consumed about 35 hours.

But Brandon, a self-described "decor addict," says that is normal for her. "There's a certain look that I want and unless I see it, I will obsessively look for it for months and months."

She says she got hooked on home decor after she bought a house with her husband and started watching HGTV. When she and her friends settled down and had kids, she says, they grew out of fashion magazines and began to fixate on the latest kitchen cabinets and fireplace surrounds.

"There's the phrase 'being comfortable in your own skin,' " says Brandon, a part-time travel agent and interior decorator in Toronto. "Well, my home is like my skin."

For women like Brandon, the home is an extension of the self. Like body image, it has become a measuring stick for their successes and failings – and a full-blown obsession for North American women.

Not since the 1950s have women devoted so much attention to the minutiae of kitchen towels, bathroom grouting and indoor plant trends (tough call: succulents or fiddle leaf fig?).

The more social pressures women face, "the more likely they are to actively try to control the things they can, like the body or the home," says Joyce Davidson, an associate professor at Queen's University who has studied how women express themselves through their home environments.

Decor projects may offer the promise of perfection for women disillusioned by their attempts to control their ever-changing bodies, Davidson adds. "The idea is that perfection might be more easily attainable if you buy the right lampshade or vase, but you're never going to achieve the right-shaped [butt]."

In the past five years, the proliferation of decor images online has made people "crazy over their homes, way more than fashion these days," says Janis Nicolay, a Vancouver-based blogger and photographer who shoots for decor magazines.

"There are people I know who lose sleep over the colour of their front door."

Home decor is the No. 1 industry driving growth on Pinterest, the virtual pinboard that has exploded from just over a million unique visitors a month in July, 2011, to more than 21 million a month in a single year. More than 80 per cent of users are women and, according to an April, 2012, report, Pinterest draws more traffic than any site other than Facebook and Twitter.

Home-improvement shows such as Rate My Space and offerings from the DIY Network dominate cable television, while the Internet is teeming with design blogs such as DesignSponge, Remodelista and Apartment Therapy, which promotes the philosophy that "a calm, healthy, beautiful home is a necessary foundation for happiness and success in the world."

Judging by comments on the site, more than a few Apartment Therapy readers (men included) have taken the edict to unhealthy extremes. In response to a post about decor addiction, readers confessed to repainting their homes again and again – much to the dismay of their partners – and continually buying new furniture destined to be resold at a loss. "Past a certain point it's really not even fun … just a compulsion to try out something I saw or heard about," evakatharina writes.

Sarah Dobbins, an Apartment Therapy contributor and photographer in Nashville, Tenn., suggests that decor has become a pressure point for women struggling with issues of self-worth. "Just like dieting or beauty routines can be a source of stress," she says, "maybe they feel they are constantly not measuring up."

Women who compare their homes to images of sleek interiors shot with professional lighting and stylists are "never going to win," Dobbins points out. One Apartment Therapy reader called it the "Gisele Bundchen effect."

Bombarded with design updates, blog followers have become hypercritical of innocuous objects they see in online house tours, such as a table lamp or piece of art that is not quite on trend, she adds.

In a recent post showing before-and-after photos of old kitchen cabinet doors replaced with cheery curtains, Apartment Therapy reader Nyrhtak commented, "The curtains make it look very messy & cluttered," while TiffanySeattle wrote, "The upper curtains on the left are driving me crazy. They're like pants that are too short."

Some readers may internalize the nasty comments they have seen online. They run the risk of thinking, "If I have an ugly interior, I must be an ugly person," Dobbins says.

For women who get caught up in decor obsession, the home is no longer a source of pride but "a source of shame," Nicolay says. She notes that even designers and stylists are embarrassed by their own homes. "People are afraid to have people over."

The fear of scrutiny may not be unfounded. Brandon says her circle of friends became increasingly competitive over who had the most high-end couch. One woman made so many catty remarks about the others' decor that Brandon ended their 20-year friendship, she says. "It was all about status."

Brandon acknowledges that decor addiction has a dark side. Nevertheless, she has no plans to give up the mission to get her home just right. "I honestly hope it's never done," she says. 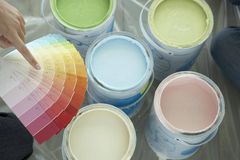 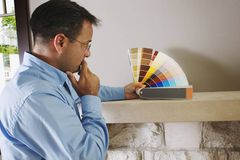 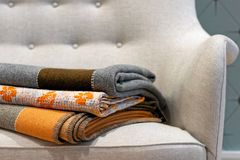