The "Eiffel" chair is an archetype of modernism. The moulded plastic shell seat sits on a cage of metal (or sometimes wooden dowel) and recalls the scaffolding of the Paris tower that give it the nickname. Its actual name is less poetic: the "wire-base side chair," designed by Charles and Ray Eames and first mass-manufactured in 1950. It is a licensed trademark: Today, if the chair is not made by Vitra or Herman Miller, no royalty goes to the Eames estate. But here's the catch – the "it" I'm talking about is the Eames name, a trademark that is registered, not the chair design itself, which while we can acknowledge was first conceived by the Eameses, is not.

Musician Robin Thicke is paying Marvin Gaye's estate more than $7-million (U.S.) in damages for copyright infringement after it was ruled that he had used Gaye's groove in a hit song. When it comes to design, however, intellectual-property law is fairly clear but the ethical lines are blurred on what's owed to the originators of design, such as the Eames chair's identifying design riff. Every category and field of created work (from literature and music to fine art and fashion) has different standards, tests and IP laws, but a classic 65-year-old chair makes a good case study of how even in the absence of much legal scaffolding, those with vested interests find other persuasive arguments – authenticity, ownership, conscience and even entitlement – to deter the dissemination and sale of (their word) copycats.

The Eames chair is now in the vernacular of design vocabulary. Consumers can buy derivatives of the archetype from a variety of sources. The chair costs $69 at Structube, while at Kitchen Stuff Plus it's on sale for $39.99. Versions with the licensed Eames name attached are about $400. Are the cheaper ones infringements on a designer? Which to buy without guilt?

Christopher Sprigman, a professor at New York University School of Law and co-author of The Knockoff Economy, thinks the discussion of copycats in furniture design highlights other preoccupations, such as the popular idea of authenticity. Because there is no general industrial-design protection regime in the United States, he explains, there is instead a patchwork of laws that touch upon it in one way or another – like design patent, which gives someone the exclusive right to make, use or sell a particular design for a period of 14 years if it's a novel design. (In Canada, Industrial Design Right grants a term of five years, renewable for another five.)

Another piece of the patchwork is trade dress, which refers to characteristics of how something looks that signify its source to consumers and has no expiry term. If the limiting principle is consumer confusion, "then just don't advertise it as an Eames chair," Sprigman says.

In other words, the cheaper chairs may be ersatz, but buying them isn't like buying a fake branded designer watch from the inside of a trench coat. It isn't counterfeit when the basic design, albeit originated by an individual, no longer belongs to any one person. Imitation may not be the sincerest form of flattery but replica vendors may operate with impunity and without reprisal. They aren't illegal – though it's still as webbed an issue as the base of the Eiffel design.

John Edelman, CEO of Design Within Reach, an authorized retailer of licensed trademark brands such as Eames, is frustrated by the knockoffs. "Nobody wants to buy a dining room table with a logo in the middle of it," he says. "Honestly, that would fix the problem! But you can't do that."

A big part of the strategy to discourage knockoffs, Edelman says, is educating the consumer about the designer who created what he calls "authentic product," as well as how it is made and why it's better. Edelman argues that most consumers buy replicas because they don't know any better – they don't know it isn't the real thing, or that there is a real thing.

"We're working on it. To increase the moral shame of it," Edelman says. He recently joined the board of Be Original, a new advocacy group of manufacturers and design studios that will promote the three Es: the economic, environmental and economic value of authentic design. In addition, DWR now signs new products, such as the underside of the Helix dining table, with its designer's name, Chris Hardy. Each upholstered Egg chair by Arne Jacobsen (designed in 1958, and retailing for about $6,800) now has a serial number and invisible identifiers of authenticity.

Many design-savvy consumers opt to purchase the duplicates instead of the more expensive authorized editions. Almost as ubiquitous as the Eiffel are shelter-magazine spreads in the "steal vs. splurge" vein, and design sites offering "high-low" ideas that mix "real" versions with copycats. The designs seem virtually identical, though some are of palpably lower quality. But sometimes they are not, Edelman admits. "A knockoff can be almost exact, and then you don't even have the argument about materiality," he says, but adds: "You can copy a Rembrandt and do a beautiful job but it's still not a Rembrandt." That poetic analogy might be a good leg to stand on, but unlike a chair, a painting is not a functional item designed for industrialized production.

Still, the issue can seem like a never-ending game of musical chairs.

As Marcus Boon explains in In Praise of Copying, because industrial design concerns utility objects, it has weak to non-existent protection. How then to understand the ongoing gotcha moments of condemnation that still hover over the purchase of a so-called inauthentic item?

Boon, a professor of cultural theory at York University, and I talked recently about the philosophy and ethics, public domain and copying in industrial design, and what licensed, or authenticity, even means. "It's also complicated because branding is such a powerful force," Boon says, "and so much of the mystique or power of branding is related to the notion that a vaguely sanctioned object is more valuable than the one that is not.

"There is a kind of boutique capitalism in which, if you can afford it, the notion of authenticity is important – and having paid $300 at Design Within Reach for the Aalto stool as opposed to $20 somewhere else," Boon says of invisible provenance as status symbol. "There are people for whom it's meaningful. Most people can't afford that privilege."

Manufacturers want to make money, Sprigman adds from New York, and limit competition. "And I get that – that's their job. But I don't think any particular retailer's view of what the intellectual property regime should be is worth much at all."

Sprigman thinks the idea of authenticity is just as manufactured, in this case by corporate self-interest. "Authenticity is often a kind of idea that people at the top of the economic pyramid use to retain things for themselves," he says, in contrast with hipster culture's focus on authenticity where "certain kinds of bourbon are authentic and certain kinds are not. It's not about money, it's about who's inside and who's outside, who has knowledge. … With stuff like mid-century-modern furniture, it's really about who has money."

Boon also thinks it's hard to discuss the whole topic without talking about politics. "Structures of privatization are what is organizing the mass distribution, and inevitably there are inequalities that are produced," he says. "The reason things can be produced cheaply for the most part is that somewhere in the world cheap labour will agree to make these objects."

Conscience usually comes at the same price as quality, but only the latter offers a spectrum. "Some people want the best quality and have the wallet to support it," Sprigman says. And for other people, good quality is good enough.

Good design for all

Because the Eiffel, or shell, chair began life as a prototype among the designers' entry in MoMA's 1948 Low-Cost Furniture Competition, Charles Eames's own words about "good design for all" as a philosophy are often cited to justify the so-called unlicensed iteration – as though other vendors of flimsy versions were the Robin Hoods of democratic design.

It's a specious argument, if you consider those words in context, which are also about a quality proposition. Time interviewed Charles Eames about the production of the prototype chairs in a July 10, 1950, article called "Sympathetic Seat."

"It will sell for $28 and he wishes he could design just as good a chair for less. 'The objective,' Eames says solemnly, 'is the simple thing of getting the best to the greatest number of people for the least.'"

While affordability may have been part of modernist ideology, not every design was meant for mass production – for example the Eames lounge chair and ottoman cost $578 in 1956 – or about $5,000 today.

For context, in 1950 when the Eameses put the "good design for all" shell chair into mass production, the price of an RCA television set – at the time, a luxury good – was $199.95. Calculated for general inflation, the chair's $28 price tag would today be about $275. Herman Miller's basic version of the chair with the licensed Eames name, still manufactured in the U.S., currently sells through retailers such as Design Within Reach for about $339. 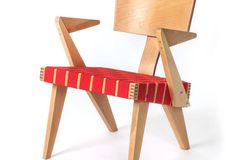 Why this is Jason Trotzuk’s favourite room
March 20, 2015 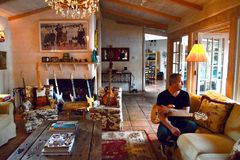 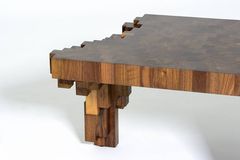