Whereas new technologies and manufacturing techniques were once responsible for driving new trends in furniture design, the hottest new pieces at the International Contemporary Furniture Fair, which closed last week in New York, were lovingly handcrafted items made from natural, textural materials. The same was true at a growing range of off-site events across Manhattan. Clearly, a backlash against slick, mass-produced furniture is gaining some steam.

While this back-to-basics movement has been growing for a few years, it is now stronger than ever. The more sophisticated our smartphones and computers become, the more designers and manufacturers are intent, it seems, on providing a respite from that high-tech world via reassuringly simple creations for the home.

Echoing developments in the food world, the design-world catchwords of the moment are local, sustainable and handmade. Brooklyn designer Lindsey Adelman, who presented an impressively expanded collection of lighting at ICFF, had her artisans building chandeliers right on the show floor. The SoHo design store Matter, meanwhile, was taken over by Swiss designer Daniel Heer, who painstakingly made horsehair mattresses for onlookers from scratch. Even Danish designer Cecilie Manz, who won the ICFF Editors Award for seating, took pains to point out the hand-stitched details on her handsomely pared-down Minuscule chair for the major manufacturer Fritz Hansen.

Beyond this key trend, a number of others gained both traction and attention. Here are a few:

Forget over-the-top patterns and extravagant shapes when it comes to lighting and furniture. The freshest pieces introduced this year embodied simple forms and had surprisingly pared-down designs. New York design firm Rich Brilliant Willing, for instance, introduced both Radient (a wall sconce and floor lamp based on a perfectly simple disk of backlit wood) and Trig (a stick-like tripod lamp with the slimmest of silhouettes), while lighting manufacturer Roll & Hill showed the Rudi pendant, which was designed by Lukas Peet of Vancouver and is little more than a loop of cold cathode tube in a brass-coloured sleeve hanging from its own electrical cord.

The furniture brand Council picked up an ICFF Editors Award for its Plank outdoor lounger, designed by Eric Pfeiffer and consisting of a metal frame supporting a backrest and arms made from straight, plain pine planks.

And in the NoHo Design District, the Brooklyn design firm Fort Standard presented a collection of sturdy tables that included a coffee table with portly cylindrical wood feet that pierce a polished marble top.

All this stripping away of superfluous detail doesn't mean designers aren't still having fun, however. One of the preferred ways of lighting up minimalist designs, for instance, appears to be the addition of bright, bold colour. A case in point was Blu Dot's new Scamp side tables, which feature a wire-basket-like frame holding a marble or glass top, with an optional electric-yellow powder coat on the base. Lindsey Adelman, who is best known for her branching brass and bronze chandeliers of glass bubbles, likewise introduced her Woodchuck pendants lights – walnut hanging lamps with metal piping coloured bright pink, yellow and blue.

As forward-looking as many introductions were, designers also found many ideas from the past worthy of revisiting – and reinterpreting – for today. For MatterMade, designer Jonah Takagi created Range Life II, a coffee table inspired by the architecture of Ludwig Mies van der Rohe; resembling a modernist glass dollhouse, the piece can be disassembled into a set of smaller occasional tables. For its part, the firm Richard Watson offered a clean-lined, contemporary take on the 18th-century highboy cabinet, while Bernhardt Design went a step further by recruiting the designer Charles Pollock, who developed iconic mid-century modern chairs for Knoll before falling off the design community's radar in the 1960s, to create its new CP lounge chair.

In an acknowledgment that you can't ignore today's technology altogether, however, Harry Allen produced a Renaissance-worthy marble and resin iPad dock for Areaware. Shaped like a human hand extending from the wall to cradle your tablet, it's a bit like having Michelangelo's David as a personal assistant.

Highlights from the International Contemporary Furniture Fair
Gallery
June 2, 2012
8 important trends from one of the world's most influential design shows
February 4, 2012 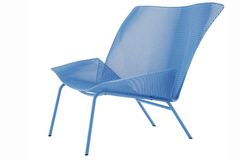 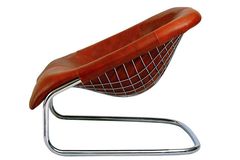