Over-the-top installations are par for the course at Milan's Salone Internazionale del Mobile, where, for instance, a crane chandelier made of actual Mini Coopers was unveiled during last month's show. How to stand out in such a crowd? For the designers behind the Vancouver-based studio Molo, it involved wandering the Italian city's bustling streets carrying glowing, bobbing bag-like lanterns, enticing passersby to venture closer. The fixtures - limited-edition versions of Molo's newly launched Hobo lamp silkscreened with a red Japanese sun disk in support of Architecture for Humanity's efforts in earthquake-ravaged Japan - were also incorporated into the designers' exhibition space. But the studio was far more excited to parade them about, igniting conversations and encouraging light-hearted moments amid the chaos of Design Week.

The exercise in Milan was a perfect example of what led architects Stephanie Forsythe and Todd MacAllen to found Molo with Robert Pasut in 2003. When they made the switch from architecture to design, it wasn't so much about moving from buildings to products, but about changing the scale of their work (the firm's name stands for medium ones and little ones). Located in East Vancouver, the 20-person studio is probably best known for its Softwall system, a series of honeycomb structures made of Kraft paper that can't help but elicit fascinated stares and touches, as it did in an installation during the Salone at the Temporary Museum for New Design. "People were really attracted to the delightfulness of it all," MacAllen says of the Grotta di Carta, a labyrinth of 3.5-metre-high recycled paper caves illuminated overhead by floating, bulbous paper pendants. The Cloud pendant was one of several new lighting fixtures unveiled - along with an LED version of the Urchin Softlite (an organically shaped expandable floor light) and a task light called Cappello - by the studio in Milan. Despite that fair's sometimes ostentatious tone, MacAllen says, people were most attracted to the smaller objects such as the task light, which is comprised of a solid concrete base and an ultra-thin, almost imperceptible metal rod that holds a delicate paper diffuser via magnets.

This flurry of new products isn't typical of Molo: Rather than constantly launch new products, the designers are usually more interested in developing and redeveloping existing ones. The Soft series, which consists of Softwall and a shorter unit called Softblock, has been in development since 2000, when MacAllen and Forsythe were exploring ways to make small, flexible housing for an architecture competition. They were also playing with structure at the time and discovered that enough layers of unexpanded honeycomb had enough friction to hold itself open. "Eventually the two converged," MacAllen says. The first prototype was situated in the pair's own 65-square-metre open-plan loft and came out of the simple need to section off space. The original two-metre-high wall was made of ultra lightweight tissue paper, but the studio has since developed Kraft paper and textile versions of walls, seats, benches - pretty much any form imaginable - and added additional tweaks like magnetic end panels to connect sections.

The surge of lighting-fixture launches, which landed Molo on the cover of Italian newspaper La Stampa's Salone preview, actually came about after the Soft series' latest major development - embedded LED lighting. Molo isn't a lighting studio per se - it's hesitant, in fact, to define itself as committed to any one discipline - but, when the designers started getting LED chips in the studio to integrate into the Softwall, they began playing with the scraps. "The lights became little sketches," MacAllen says. "Something we can work on and play with. And it feels good to do a nice piece of work in a short amount of time."

Not that the studio has completely moved on from larger-scale projects. They recently completed a cultural museum in Aomori, Japan, a commission Molo originally won 10 years ago. Originally envisioned as a housing project, it developed into a museum for the Aomori Nebuta Festival, where the city could store the giant paper creatures that are paraded through the streets during the celebration. The waterfront building opened its doors earlier this spring and features 12-metre-high orange steel ribbons that encase the entire facade, twisting and bending to allow for unique views into and out of the building.

While soft walls, bag-like lighting fixtures and a museum in northern Japan may seem exceedingly disparate, MacAllen sees a certain thread that binds them all together. He calls it a universal language. "The work is abstract enough to be not easily recognizable as one style or another," he says. There's also a pragmatic air to all of Molo's projects - one that is particularly prevalent in its latest endeavour, a sheltering system for disaster victims. While many cities have systems in place to house displaced people during natural disasters, the studio is designing a readily deployable shelter system for governments that offers people privacy within these larger shelters. "People have fundamental needs - for shelter, to bathe, to eat. Why not make those the luxuries in life?" MacAllen says. "At its essence, isn't that was design and architecture is always trying to accomplish?" 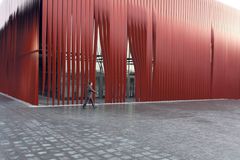 Coming soon to a design shop near you: periwinkle blue and plywood
April 30, 2018 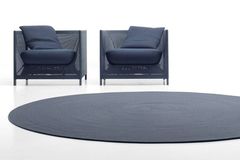 Driftwood decor has gone from kitsch to elegance
May 1, 2018