Walking into the Vancouver headquarters of Lululemon Athletica, I’m greeted by yoga-pant-wearing staffers whose glow seems somehow even more luminescent against the backdrop of a lush, three-storey vertical garden. The work of Vancouver-based design firm Green over Grey, this fully hydroponic “living wall” contains more than 2,000 individual plants representing 20 unique species – but no soil. It’s planted into a thin, two-layered membrane made entirely of recycled materials. Different shades of foliage evoke a wood-grain pattern, and the woods themselves. 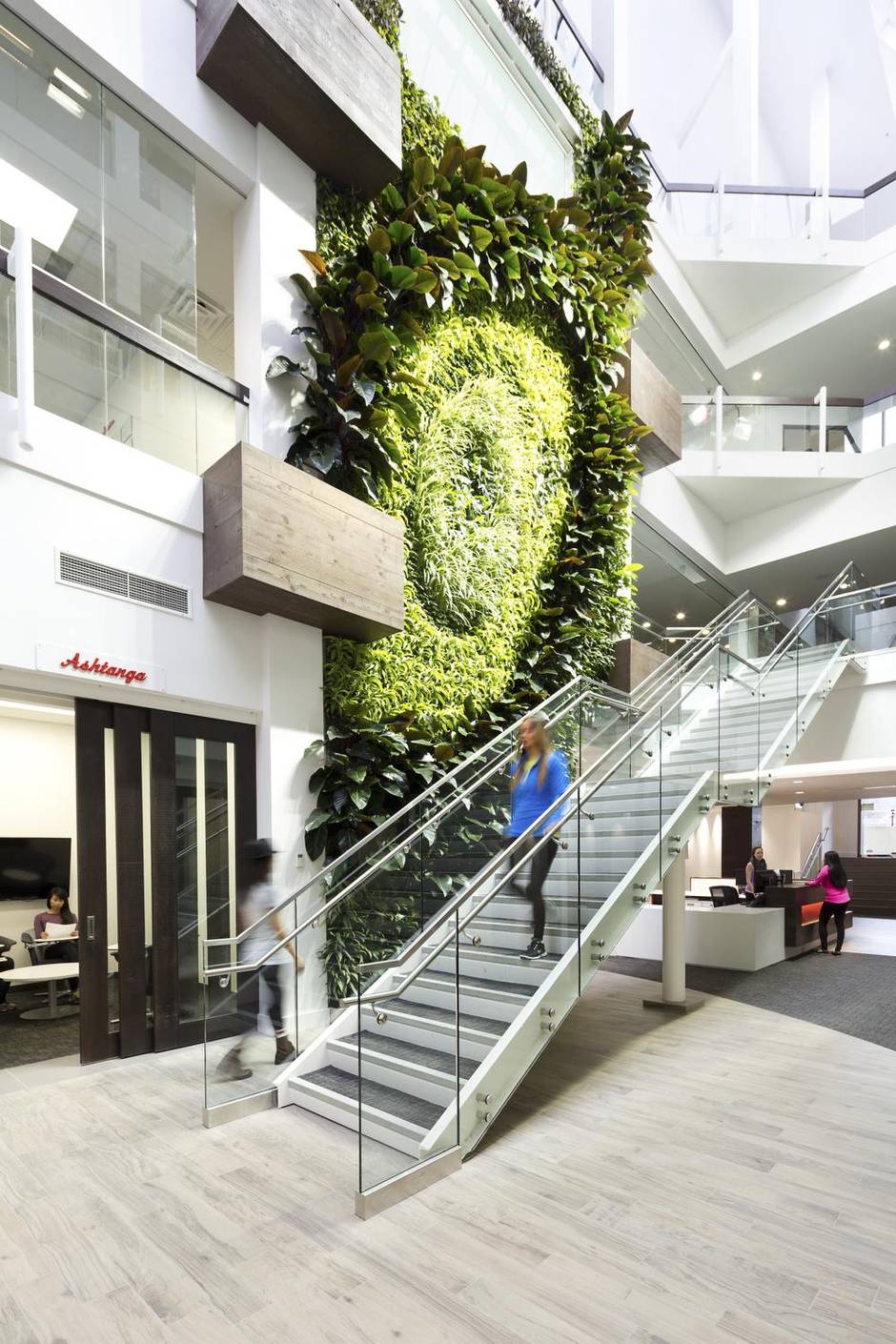 “For the people that work here, it feels like you’re not in an office,” says Lululemon’s Karen O’Connor, who works in community and media relations. “On one of those dark, rainy, typical Vancouver days … it feels refreshing to come in here.”

This has felt like a long winter already, with Canadians in the East snapping in the cold and those of us on the West Coast chilled to the rainy bone. It can be hard to remember what it was like to be outside and not cursing the elements. These bleak weeks can have us pining for proximity to all things green.

Living walls featuring real plants are increasingly seen in office buildings, restaurants and retail spaces, and popping up in private homes. There’s also a variety of other horticulturally stylish ways to green your interior and warm up your soul, with options that work even for the most gardening-challenged. 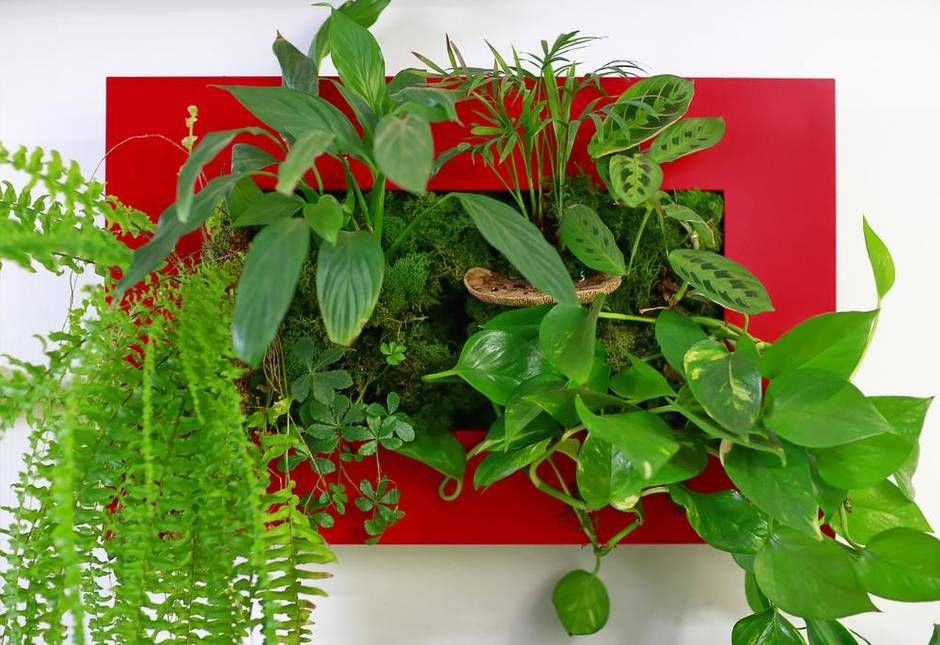 For the green thumb

Living walls such as the one at Lululemon require careful maintenance. They are rigged up to automatic watering systems (Lululemon has a room behind the piece that houses an enormous vat of dissolved nutrients and a network of pumps), and benefit from near-monthly visits from technicians who remove yellow leaves and spent flowers, and spray them down.

“It is a garden, so it does need to be maintained,” says artist and chief designer Mike Weinmaster, who plots out his installations in a sketchbook, and visualizes how the work will look as it continues to grow. The Lululemon wall is more lush now than when it was installed in November, 2013 (it even yielded a few pineapples, which were divvied up among Lululemon staff).

Green over Grey has installed projects across North America, including a 16-storey-high garden at Desjardins Group headquarters in Lévis, Que., and an Emily Carr-inspired living “painting” at the Edmonton International Airport.

While its focus is commercial spaces, it has also created some living walls for private homes (generally of the super-high-end, Architectural Digest variety). For scaled-down options, another Vancouver company, ByNature, offers its ModuloGreen living walls, which are soil-based and come with compact automatic irrigation systems. The price for living walls varies widely, but starts at about $100 a square foot at both companies. 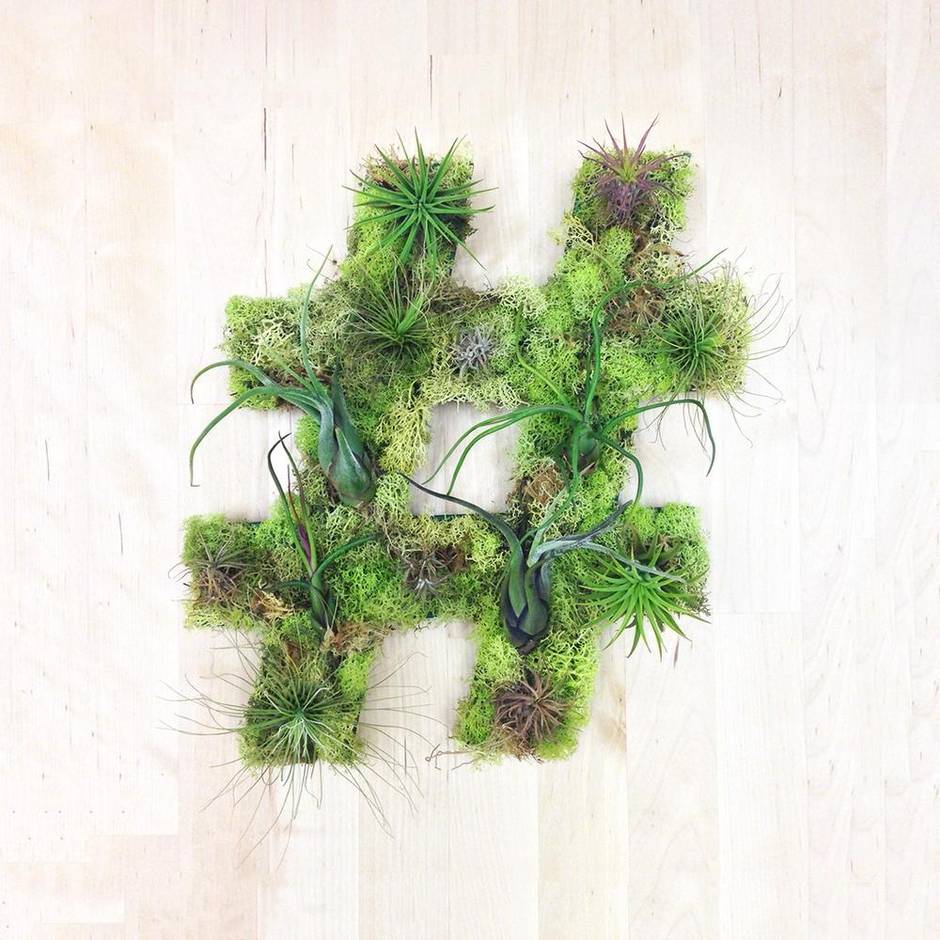 For the greenish thumb

Want a living wall but don’t have a mansion in which to install it, the funds to pay for it or the ability to keep it alive? ByNature also sells Wallflower Living Frames, which are smaller scale, but also eye-poppingly verdant. Live plants growing out of soil pouches are framed either in wood or funky designs created by artists who work in the same East Vancouver labyrinth of studio spaces as ByNature. Frames come in four sizes, and range from $30 to $250 (more for artists’ frames).

ByNature is run by two French natives, horticulture engineer Nicolas Rousseau and Fred Collay, who use plants such as ferns, spider plants, moss, pine cones and dry fungus to replicate the West Coast rain forest. The frames do require some care: Each has a reservoir with a floating indicator to let you know when to water it, usually about once a week.

Rousseau will begin teaching a course on designing living walls at the British Columbia Institute of Technology this spring. He says the Living Frames were engineered to be easy to care for, so as not to freak people out who think they’re bad at taking care of plants. “It’s like having a pet. You water your plant, you look at it grow every day, and when it dies, you cry,” he says with a laugh.

In Los Angeles, artist and cultural consultant Sharon Ann Lee creates Art We Heart, plant art in the shape of letters, hashtags and other symbols that speak to contemporary life. She began making wall art out of air plants after a consulting gig turned her on to the psychological benefits of exposure to nature.

“Modern people living in metropolitan environments heavily covered in concrete sometimes don’t realize that is adding to a general kind of malaise,” says Lee, who found that being around any sort of natural environment had a huge impact on people’s happiness and well-being. She wanted to make art that would help deal with our societal nature deficit disorder. “People can enjoy it like a piece of art but also have this kind of subversive well-being generator that isn’t in a pill form.” 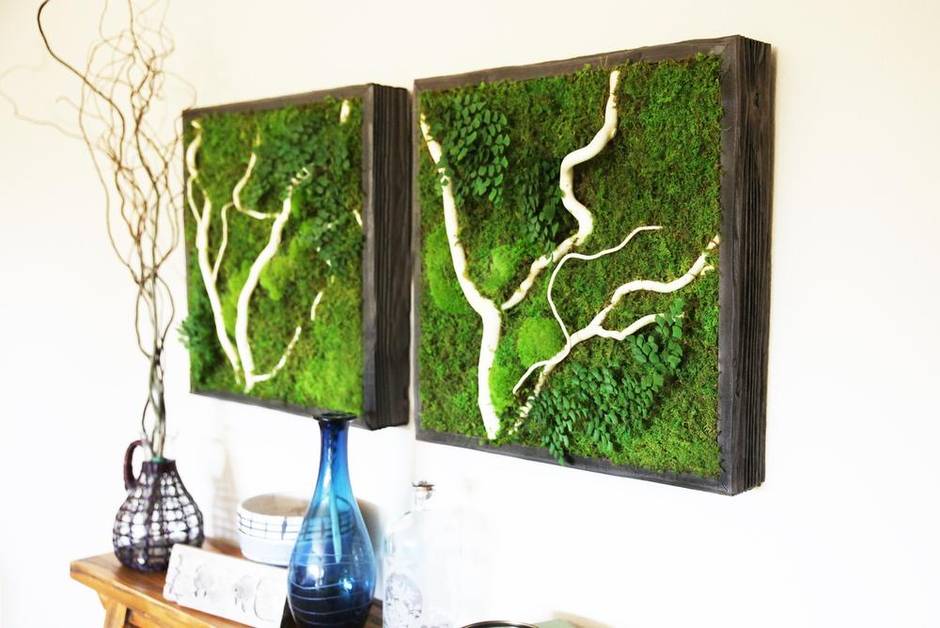 For the black thumb

Then there are options for people like me, someone who managed to kill a five-year-old’s mini-terrarium that required only a couple of drops of water once a month for a near-guaranteed long life.

Northern California designer Erin Kinsey makes art with preserved plants, which require no water whatsoever (she does suggest you dust them twice a year, using cans of compressed air). Each piece is one of a kind. Typically, Kinsey uses a moss base and builds in branches and other plant material – ferns preserve well – and frames the work in reclaimed wood. Under the name Artisan Moss, she has shipped her pieces – which range in cost from $100 (U.S.) to about $1,500 – to customers around the world.

“A lot of people say that they feel like – because it’s three-dimensional – they almost want to enter the picture and be in that space. It’s almost like a doorway,” Kinsey says. “Like if you looked at a piece and you used your imagination, you could almost see the rest of the forest around it.”

Another option that looks alive but requires exactly zero maintenance is ByNature’s Mossart collection, preserved moss in frames, covering walls or even ceilings. The preserved reindeer moss from Norway feels soft to the touch, because the water in the moss (which is actually lichen) has been replaced with glycerin. The moss is dyed and comes in various colours (though green is the most popular) and Rousseau can also play with colours to create what he calls moss paintings.

Mossart, which is about $50 a square foot, doesn’t need to be watered and requires no natural light. It gives you the feeling of being in nature without having to lift a finger (or thumb). “It’s dead,” promises Collay. “You can’t kill it twice.”