Architects are reinterpreting the ancient concept of the public bath. Unlike spas, bastions of luxury and privacy, this ritual focuses on community and, now, cultural change. The idea is that ‘bathing is as much a state of being as an act of cleansing,’ writes Jane Withers, curator of the exhibit Soak, Steam, Dream, in this excerpt from her introductory essay.

“The role bathing plays within a culture reveals the culture’s attitude toward human relaxation,” wrote historian Sigfried Giedion. “It is a measure of how far individual well-being is regarded as an indispensable part of community life.” According to Giedion, bathers roughly divide into two tribes: hygienists and rejuvenators.

For the former, cleansing is the goal of bathing; for the latter, washing is merely a preliminary ritual in a watery odyssey. From the baths of Ancient Greece and Rome to the Islamic hamam or European spa towns, from the Japanese onsen (hot springs) to the Russian banya or Finnish sauna, historically bathing was central to community life, and the bathhouse was an institution for both health and pleasure; as well as providing essential sanitation, it was a place of social, cultural and political exchange as well as of relaxation and rejuvenation. But with the spread of the private bathroom and a more technological and clinical approach to sanitation, the pendulum has swung from rejuvenation to hygiene. We have largely broken with this rich cultural legacy and lost the role of the bathhouse as a community space along with the sensorial dimension of an architecture of stillness and reflection designed to be seen while floating or through a veil of steam. 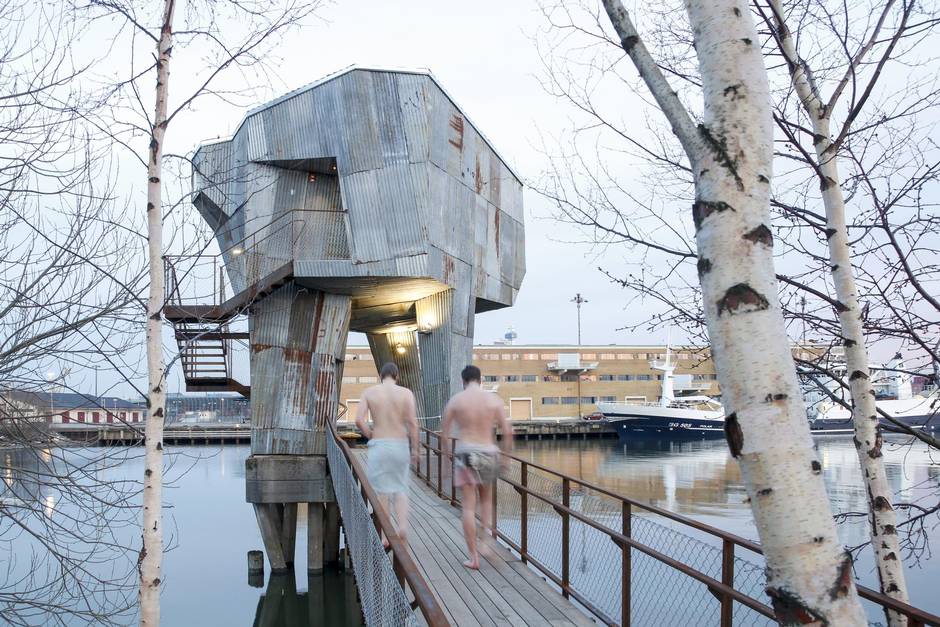 This dramatic corrugated iron structure, designed by Berlin-based architects Raumlabor, is a sauna in Gothenburg, Sweden. Its procession of bathers creates a powerful image of the human body as a harbinger of social change. (Lasse Sehested Skafte/Raumlabor)

A long term o-furoholic (the Japanese description for a person addicted to hot water) and squarely on the rejuvenation side, I have spent years bathing in the shadows of the great water cultures: a former Roman Bath off the grid in rural Tunisia now functioning as a hamam; a Japanese onsen where sulphurous hot springs bubble into the cold river water; and Moscow’s great Sandunovsky baths where the banya stove bellows flames like a dragon and bathers wear clogs to avoid touching the scorching tiles. Renewed interest in this rich historical panorama is helping to reimagine the bathhouse as a community space and reconnecting us to water in an increasingly water-stressed era. Unlike the contemporary spa – almost invariably a place of privilege and luxury – the bathhouse has more inclusive roots. New models are emerging in response to changing social and urban conditions and shifting boundaries between public and private life, and between personal and communal space. There is also now a need for wellness spaces built on different principles from the rabid consumerism of the beauty and leisure industries.

If you take the long view of bathing culture, the later 20th century looks like the Dark dry ages, the nadir for most ancient and sociable water rituals; the gym, the pool, the bathroom and the beach have all eclipsed the slower pleasures of the communal bathhouse. Several factors contributed to this: Through history the bathhouse has often been the focus of debate on hygiene and morality especially in Anglo Saxon cultures, and the hangover of Victorian prudery cemented a modern fear of promiscuity and depravity. This moralizing arose again with the promiscuity associated with gay bathhouses in the 1970s and 1980s, and the AIDS epidemic eventually forced censure and closure of many urban bathhouses in the U.S. and Europe. Every culture has rules and taboos around hygiene and bathing, but in many cultures – Nordic or Japanese for instance – there is not the same dichotomy between pleasure and sin, and bathing is not moralized to the same extent. 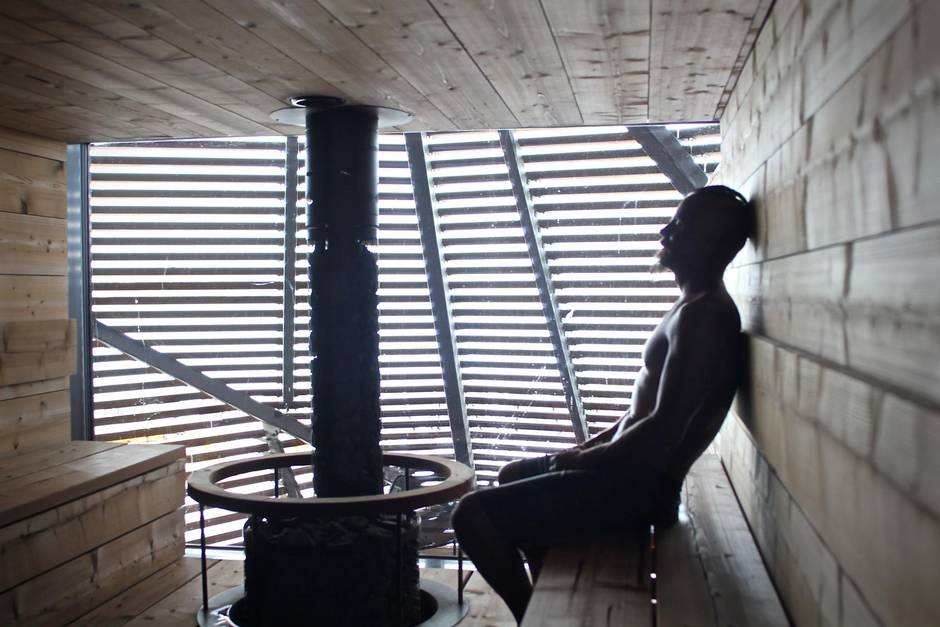 Artist and bathing aficionado Leonard Koren, who has been writing about bathing cultures since the mid-1970s, promotes the idea that bathing is as much a state of being as an act of cleansing. In Undesigning the Bath (1996), Koren analyzes “The Subjective Qualities of Superior Baths”: “To bathe is to fall into step with your biological rhythms: in and out breathing, the speed of blood coursing through your veins, the slowness of tiredness. … The mechanical world of objective time – seconds, minutes, hours – is irrelevant here. Taking a bath properly requires being able to guiltlessly linger, hang out, and/or do nothing whatsoever.”

The Romans termed this otium, a mode described as productive idleness as opposed to aimless leisure. In Japanese culture, where the art of bathing has been refined over the centuries, hot water transports the bather to a state of bliss described as yudedako. Translated literally as “boiled octopus,” it refers to the point where the bather turns bright red from the fierce heat of the water, and a physiological shift takes place as the mind floats freely into another dimension from everyday existence. 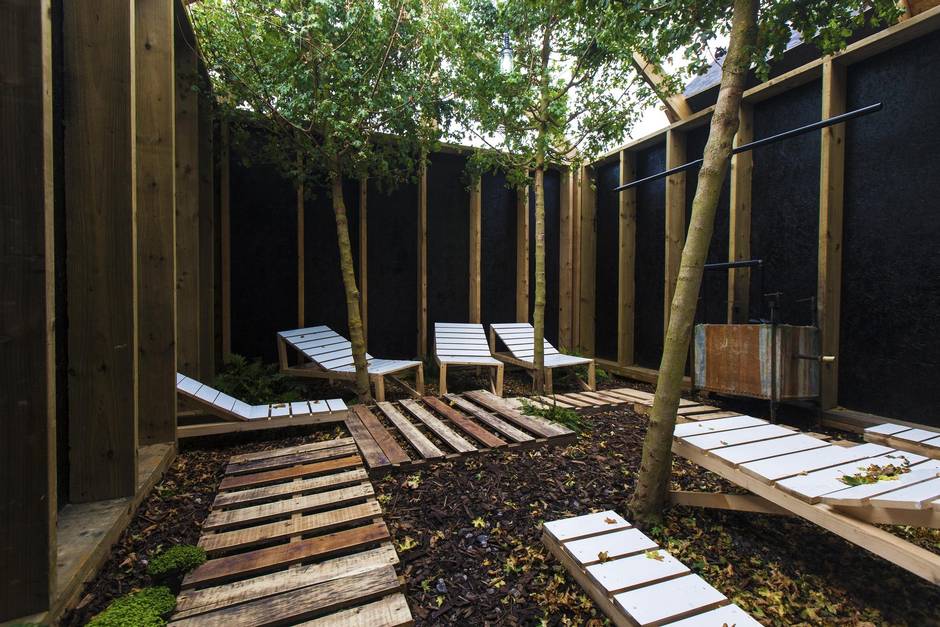 Of all the more recently established bath complexes, Peter Zumthor’s Therme Vals, built over the hot springs at Graubunden in Switzerland, has probably done the most to help re-engage with ancient tenets of bathing culture and the bathhouse. Its majestic architecture is a celebration of the physicality of the mountains and the thermal spring waters that bubble up from within, streaking the quartzite stone in rich mineral oranges and greens. But the architecture is essentially a frame for an elaborate choreography of bathing rituals. The bather roams from chamber to chamber sampling different thermal sensations – warm and cool, hot and cold, as well as olfactory and aural water experiences – that reconnect us to the ancient meaning of spa (salus per aqua or healing through water).

Although the bathhouses [shown here] belong to different cultures, typologies and traditions, they have in common a belief in bathing as a catalyst to creating community. The Japanese describe this affiliation between bathers as “brothers in the skin.”

Raumlabor’s Gothenburg sauna, for instance, was recently planted in the disused container port as an agent to seed the area’s regeneration into a new urban quarter. The dramatic corrugated iron structure – as if a shipyard shed had been contorted into a new form – and its procession of naked bathers create a powerful image of the human body as a harbinger of social change. Similarly, Barking Bathhouse, a temporary project in one of London’s poorer outer suburbs, references earlier traditions of using the public bathhouse as a means of building community. In 19th-century Britain, progressive social activists established public baths for the poor modelled on traditional Ottoman Turkish baths. The new baths were as much about engineering social change as hygiene and health. At the height of this philanthropic balneary boom, there were over 100 Turkish baths in London alone. Such institutions are beginning to make sense again as shrinking urban living spaces force us to rethink shared and communal activities, and the boundaries between public and private space. 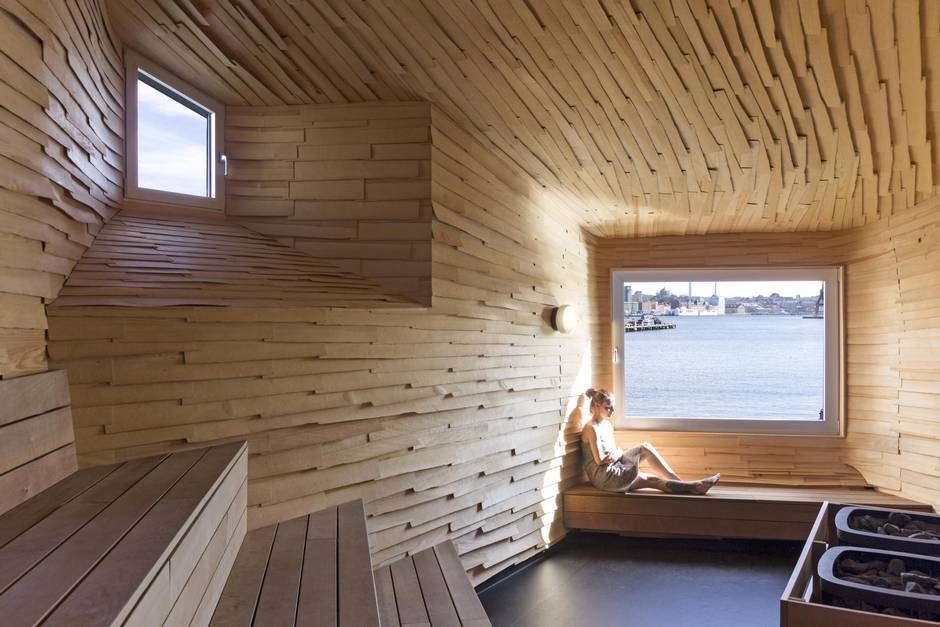 In Sweden, Raumlabor’s Gothenburg sauna was built in the disused container port with the aim of inspiring the area’s regeneration into a new urban quarter. (Lasse Sehested Skafte/Raumlabor)

In a remote and mountainous area of rural China, where public sanitation is still limited, Bao’s Split Bathhouse is driven by the need to improve public hygiene while also looking at how the bathhouse can fulfil community needs. A low-cost community project, bathhouses for men and women are housed in wings protecting a partially sheltered community gathering space.

Architect and sauna enthusiast Tuomas Toivonen in the Ten Commandments of the Public Bath describes the bathhouse’s particular importance as a public space: “More than creating a space for physical bathing, the architecture of the bath requires – and creates – a space of anti-conflict, anti-competition and anti-hierarchy.” Unlike most other public spaces, the bathhouse is a place of synthesis and reconciliation, where the armour of daily life is discarded along with one’s clothes, and usual codes of behaviour melt with the steam, helping make the bathhouse a powerful sanctuary as well as an agent of change. Toivonen’s Now Office project for the Kulttuurisauna (Cultural Sauna) in Helsinki is a reference to Alvar Aalto who already in the 1930s wrote solemnly about the need for a new sauna culture. It also references the Greek and Roman baths where bathing was a glue between the physical and intellectual, between the sports ground, library and debating hall that were all part of the baths complex.

In China, the Shanmen public bathhouse is split into two distinct buildings for men and women that are linked by a low-cost greenhouse.

The bathhouses here invoke a return to the sense of the word advocated by Sigfried Giedion at the beginning of this essay: one premised on reconnecting body to mind and in turn, to community, rather than more contemporary ideas of “wellness,” which are complicit in encouraging endless individualized self-improvement. And unlike the dry stats and deepening foreboding of news reports on drought and flooding, bathing creates a way for us to reconnect to water more intimately and profoundly through our senses. Surely it’s no coincidence that this should happen at a time when climate change is forcing awareness of our precarious relationship to water and the realities of a water-stressed future.