As Arctic communities undergo profound growth and change, artists and architects are responding in radical ways. They are creating enduring structures that actually reflect the ever-changing environmental and cultural context of the North 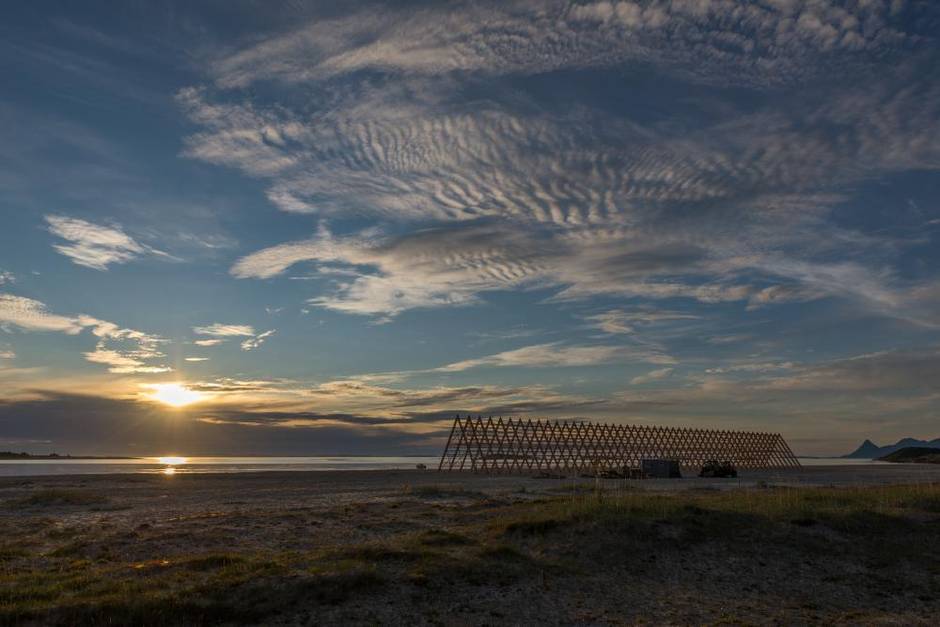 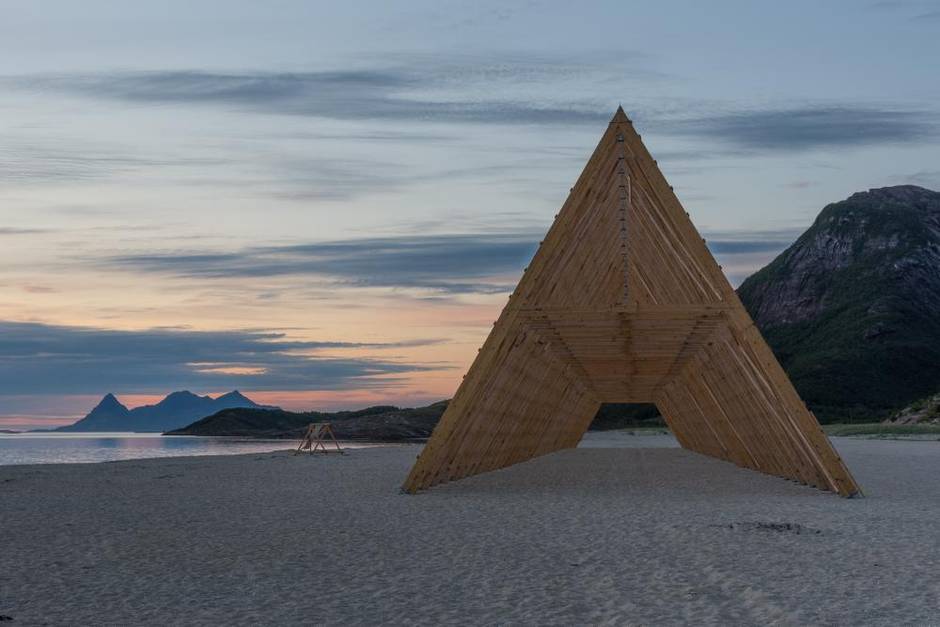 Sandhornoya, a remote island in northern Norway, just above the Arctic Circle, has the kind of epic, sublime landscape that would have inspired Turner or Bierstadt. A white sand beach unfurls around an inky blue inlet, a black, jagged mountain knifes up through a scruff of green brush. The landscape is mystical on its own, but until September, 2015, it is even more fantastic. Along the shoreline, a stunning series of pavilions have been erected for SALT: the world’s first, year-long festival of Arctic art, architecture and culture.

Since it began last August, the event has swelled the island’s population well beyond its normal 400, attracting visitors from as far as Australia. One woman travelled from Britain (by plane via Oslo, plus a boat ride) simply because she saw a photo of the festival in a magazine and decided she had to be there.

The festival was co-founded by Norwegian curator Helga-Marie Nordby. She’s just one of a handful of creative thinkers from around the world (many of whom are Canadian) who are interested in the North. As the once remote Arctic and subarctic regions become more developed, and their sparse populations grow and urbanize, it’s a timely place to be a designer. The changes are demanding a new expression, and artists and architects are responding with beautiful, enduring structures that reflect the diverse, ever-changing environmental and cultural context of the North – referencing its past and preparing it for an uncertain future.

“The Arctic is so vast,” explains Nordby. “But so few people live there. So there is very little knowledge about it. People don’t have their eyes on it.” And because corporations and politicians are increasingly jockeying for control of the Arctic’s vast, to-be-tapped natural resources (which are becoming more accessible with climate change), Nordby is concerned about what could happen unnoticed. Hence her festival – it’s an attempt to bring eyes and awareness to the land. 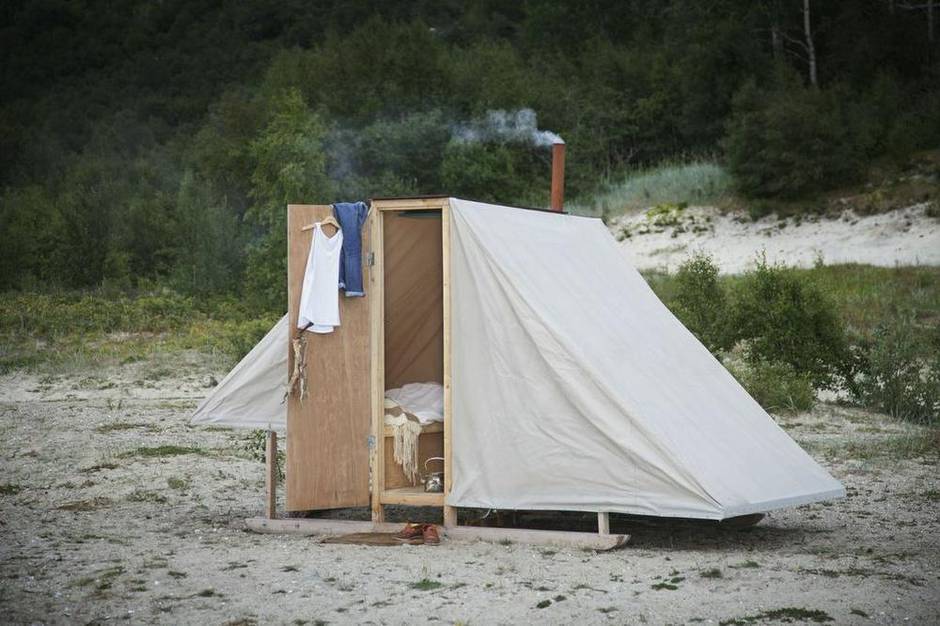 After arriving, guests camp out in simple but elegant wooden structures on the shore – four of which was designed by a group of architecture students from Halifax’s Dalhousie University. They congregate around three giant, triangular pavilions conceived by Finnish architect Sami Rintala. There’s a concert hall, an art space and a 110-seat sauna. Each has a long, peaked-roof shape, a shape inspired by fiskehjelle, racks that have been used by Norway’s indigenous Sami nomads for thousands of years to dry freshly caught cod. There’s also a steel shed for showers and a restaurant. Each structure, on its own, is artful. As a collective, they make for a utopian, entirely charming Arctic town.

Although SALT will only remain on Sandhornoya for several more months, Nordby plans to tour it over the next few years to at least seven more countries, including Greenland, Ireland, Scotland and the United States. 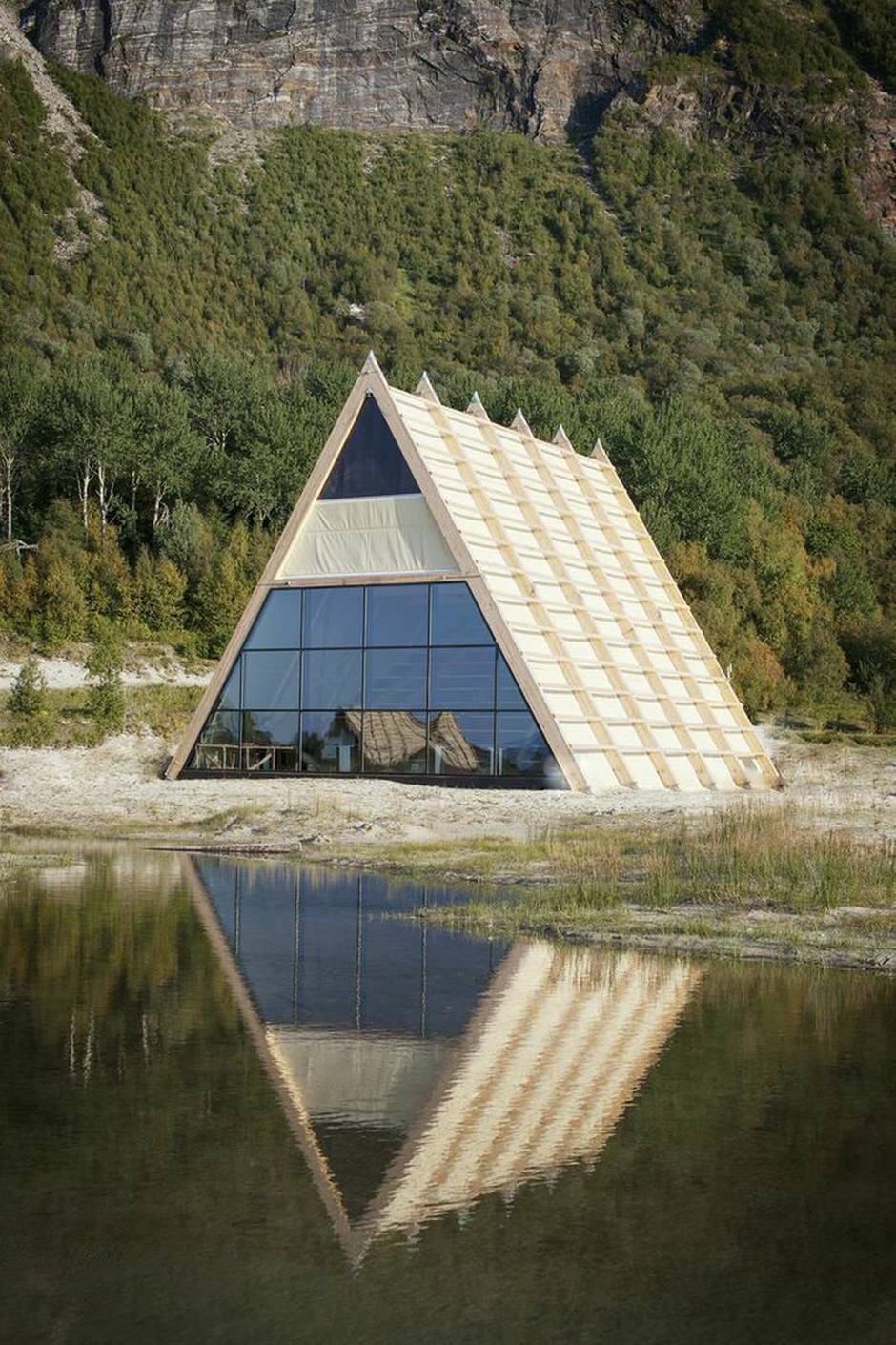 Maybe it will make it to Canada (Nordby isn’t sure yet). But regardless, we have our own thinkers turning their attention to the distinctive needs of our own North – building in a complex context to satisfy a sensitive environment, and a sensitive set of cultural conditions. Particularly, righting past wrongs where architects and planners simply imposed an alien modernity on the local Inuit and First Nations, ignoring their needs and interests.

Mason White and Lola Sheppard are architecture professors (at the University of Toronto and the University of Waterloo, respectively), and co-run Lateral Office, a design research studio that has a special focus on the North.

They co-curated Arctic Adaptations, an award-winning show exploring Northern design that was first shown at the prestigious Venice Biennale of Architecture, and have co-written a soon-be-released book, Many Norths, about design possibilities in the Arctic.

“It’s frightening to see how naive we all are,” says White, when it comes to the North.

White points out that Iqaluit is one of the fastest-growing cities in Canada. Since it became Nunavut’s capital in 1999, the population has more than doubled (because of a high birth rate and rural-urban migration). And it is projected to double again in the next two decades.

Part of the challenge, though, is building for a largely Inuit and First Nations culture. As of now, there are no degree-granting universities in Canada’s North for architecture or urban-planning schools. So any construction is likely going to be initiated by a designer from the south. Which has historical baggage.

“Typically, people in Iqaluit have been told, ‘Here’s the plan,’ without being consulted,” says White. So now “There might be a fear of innovation. Because in the past, innovation may have done bad things.

“But there are other forms of innovation,” says White, “that are based on collaboration and intelligent, informed knowledge-sharing.” Ideas that instead of denying or excluding the local context and culture, celebrate and bring it in. 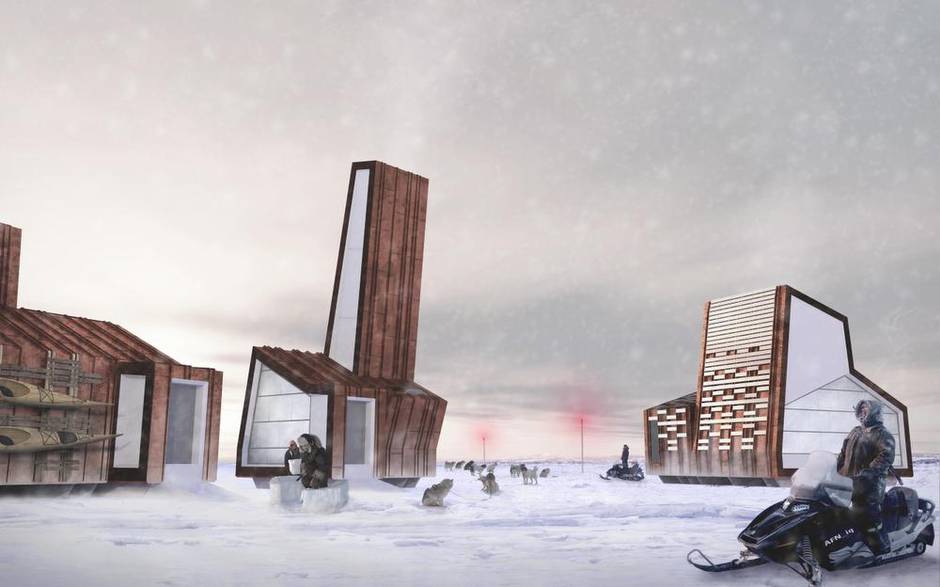 One of their design proposals, envisioned after extensive travel and consultation throughout the Arctic, is a series of beautifully articulated trading huts and food storage sheds, collectively called the Arctic Food Network. The buildings would be lashed together like snow sleds, and take advantage of snow-pack walls that insulate in the winter and melt for better ventilation in the summer. But they would be strategically placed to take advantage of a food distribution strategy that largely relies on snowmobiles to reallocate hunted meat between various communities.

Montreal-based architect Alain Fournier has been working professionally in the North since the early 1980s. He agrees with White that collaboration with local communities is the key to innovation.

“In the south, we are still quite steeped in the idea that the form of a building should follow the function,” says Fournier, co-founder of FGMDA Architects. “In the North, it’s important that the form express the culture of the community. 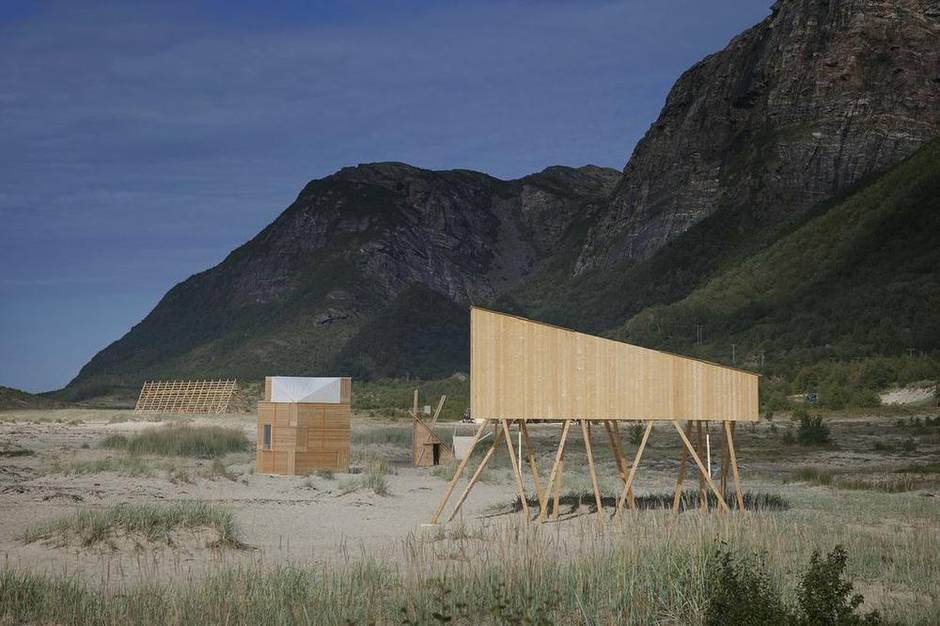 He points to a series of small, regional airports that he’s designed in Nunavik, in northern Quebec, that he worked on with community members in each location to develop familiar themes and motifs.

One has a long, skinny structure, with slender framing like a kayak. Others reflect beluga whales, sleds, even native berries. The structures are simple and understated, but their emotional connection to the people that use and live by them makes their presence powerful.

“We’re at the cusp of something exciting,” says Fournier, who think it’s his responsibility to help local communities “be empowered to express their culture,” and not propagate old, colonial ideals of imposing a southern way of life. 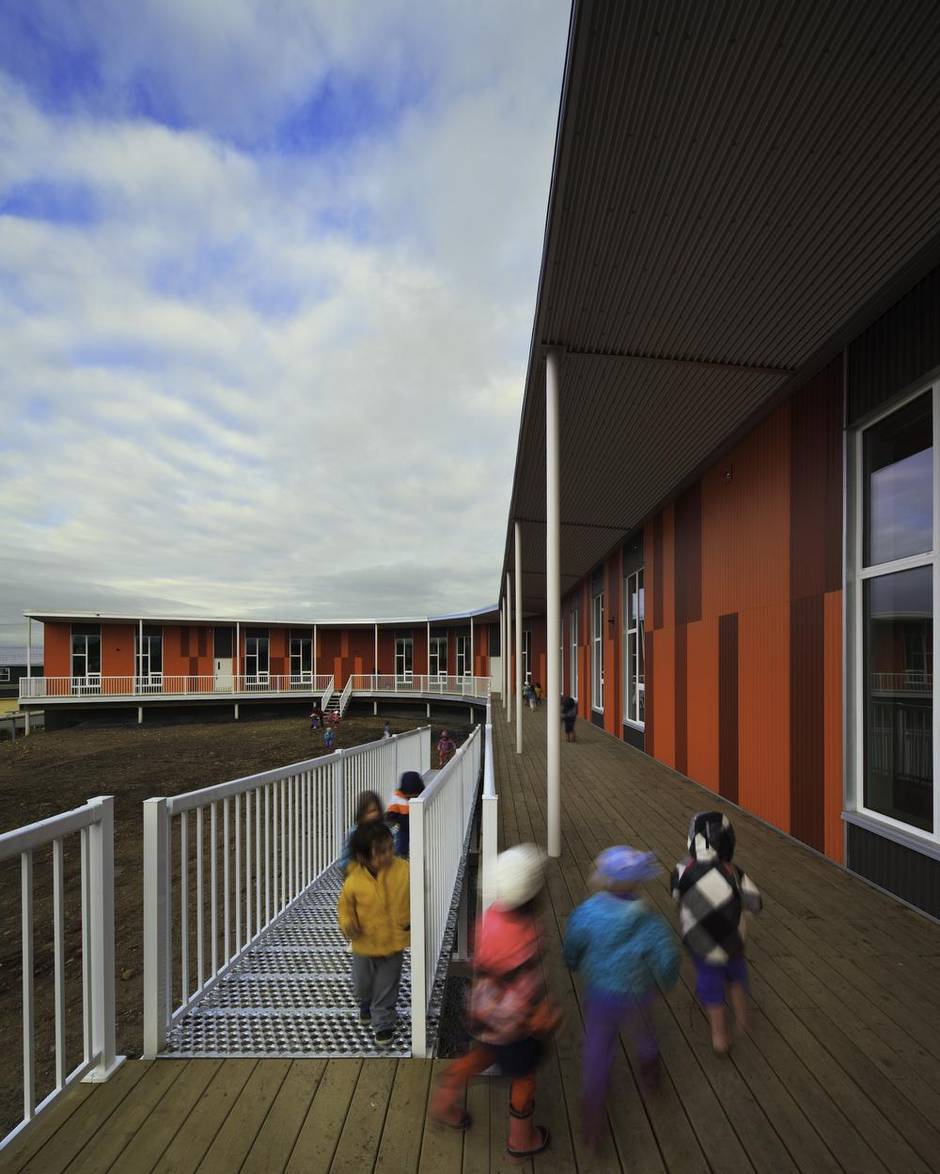 It’s the decidedly unsouthern way of life that attracted architect Jack Kobayashi to move permanently from his hometown of Montreal to Whitehorse in the early 1990s. He came for a year-long contract with the Yukon government right after he finished his masters of architecture at the University of Manitoba, and was captivated by the sense of possibilities.

“In a city in the south,” says Kobayashi, “as an architect, I would likely be pigeonholed to a certain job. Stuck at my desk. Here … there is a lot of opportunity.”

Like Iqaluit, the population of Whitehorse has grown quickly (it’s increased by more than 50 per cent since 1991). That growth has not only allowed Kobayashi to co-found his own, successful architecture practice – Kobayashi + Zedda Architects, which won one of Canada’s highest architecture honours, the Prix de Rome, in 2006 – but also start his own contracting business, 360° Design Build, which has developed over $13-million in residential and commercial real estate since 2002.

And his long-standing connection to the community – the fact that he actually lives there – has given him an advantage over the fly-in-fly-out architects who more typically build in the North. Instead of merely perfunctory buildings, Kobayashi designs sensitively for the location.

Even though the climate is challenging to build in, he’s conscientious about sustainability. A health centre he did in Atlin Lake, for example, entirely relies on geothermal heat (replacing over 1,000,000 litres of diesel per year that facility would have needed). Or his John Tizya Visitor Reception Centre, in Old Crow, Yukon, an area inaccessible by road. He designed it so that all the materials for the 5,000-square-foot facility would fit on a single, carefully packed cargo plane (which saved on construction costs – which tend to be astronomical). And he designed a heating system largely free of fossil fuels. It’s hung with solar panels, which help in the sun-soaked summers.

Like Fournier’s work, as well as the SALT pavilions, Kobayashi’s buildings are simple and understated. But they are undeniably rooted in their surroundings, and were clearly conceived with affection for the people and landscape they serve. They also set a hopeful example for future designers turning their attention to open expanses of the North. That they can make the sublime landscape beam brighter with a strong pride in the place.

Editor's note: Dalhousie students built four of the wooden beach structures guests camp out in. Incorrect information appeared in the original version of this article.