Fluorescent lights. A wall painted bright yellow. A smoke detector that keeps beeping through a meeting. These are things that you might encounter in an office or a classroom without much notice. But what if you saw those fluorescent lights flickering intensely and heard them emitting a painfully sharp buzz? Or if that yellow wall seemed to be vibrating, like a broken computer monitor? Or if the bleep of the alarm was the loudest sound you could hear?

Many people with autism have this sort of discomforting experience every day. Their experience of sensory inputs, such as sound, light and textures can be radically different, and apparently innocuous design details can be powerful barriers to their comfort and success, from school to the workplace and beyond. Among designers and researchers, there is growing interest in understanding how to recognize the needs of this group – which is at least 1 per cent of the population. And at the heart of autism-focused design is one central insight that can benefit everyone: that we all experience the world in different ways, and that being able to choose a comfortable environment can be a powerful thing.

“What I have always found is that when you design for autism, the general population benefits,” says A.J. Paron-Wildes. A designer at the workplace-furniture company Allsteel, she began exploring the sensory and spatial experiences of autistic people after her son received a diagnosis in the 1990s. “What was fascinating,” she recalls, “was that walking through a space for me could be totally different than it is for another person.”

There was very little research available on the topic, so Paron-Wildes conducted her own, developing guidelines for architects and helping design facilities for children with autism. But she also finds “design empathy,” as she puts it, valuable in the offices she designs with her day job. “We have a range of human spectrums,” she says. 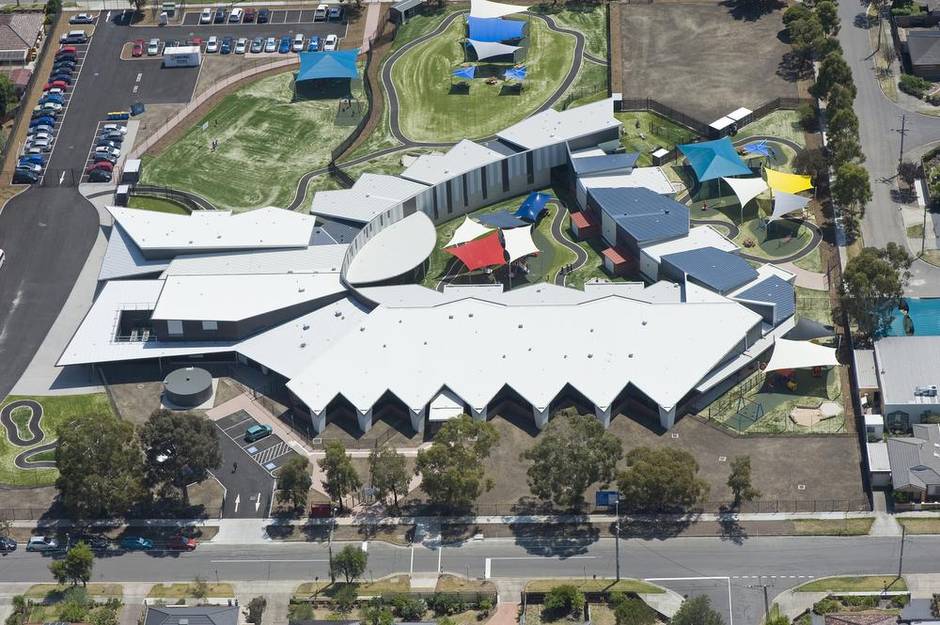 The Northern School for Autism in Australia, designed by Hede Architects, is built specifically to support students on the autism spectrum.

Part of the challenge for designers is that autism is so varied and complex. People on all parts of the autism spectrum tend to share challenges with “sensory processing.” This is where interior design and architecture become crucial, as the site of invisible barriers. “It may not be immediately apparent … but [such] barriers are much more significant for autistic people,” says Ari Ne’eman, co-founder of the Autistic Self-Advocacy Network in the United States. “It’s not just a distaste that may exist in the general population.” For example, he says, poor soundproofing in a residence – so that you can hear the neighbours in the next apartment – can be an annoyance for some people; for people with autism, it can make a home “almost unliveable.”

Architects and designers have been thinking about issues of this kind for decades. The idea of “universal design” was formalized in the 1960s, with the ambition to make places accessible to people with physical disabilities. That school of thought, today known as inclusive design, has grown to address a wider range of needs and experiences. And a growing set of laws, including Ontario’s Accessibility for Ontarians with Disabilities Act, is pushing employers and institutions to ensure their practices and facilities are inclusive.

And yet autism has been largely overlooked.

“What I have always found is that when you design for autism, the general population benefits.”
A.J. Paron-Wildes

Magda Mostafa, a Canadian who teaches architecture at the American University in Cairo, began to address that gap a decade ago. Like Paron-Wildes, she found “surprisingly little” theory to work with, and after extensive research she created the ASPECTSS Design Index to gather some of the most widely applicable ideas of what she calls “sensory design.”

These include controlling acoustics; using natural light, but carefully modulating it; arranging spaces to facilitate smooth transitions; providing “escape spaces,” which provide private places to retreat; and grouping spaces so that quiet activities are separated from louder and more active ones.

Mostafa then compared her results to the work of a few architecture offices, and found many similarities. Among them was Hede Architects of Melbourne, Australia, who had built two schools specifically to serve students with autism.

“On these subjects, there is no easy research,” the firm’s principal, Paul Hede, says; even in his work, the two schools’ different sets of students, educators and professionals emphasized different design strategies, he says. “Often it’s about reduction of stimulation,” Hede explains, “but not all students are served well by that.”

Indeed, some people with autism are hypersensitive to sensory inputs – such as sound and light – while others are hyposensitive, and need plenty of stimulation to be comfortable. Accordingly, Hede’s firm’s design for the Northern School for Autism, outside Melbourne, provides choice. “The building is broken down, ultimately, into little spaces that those children feel happy in and can control.” 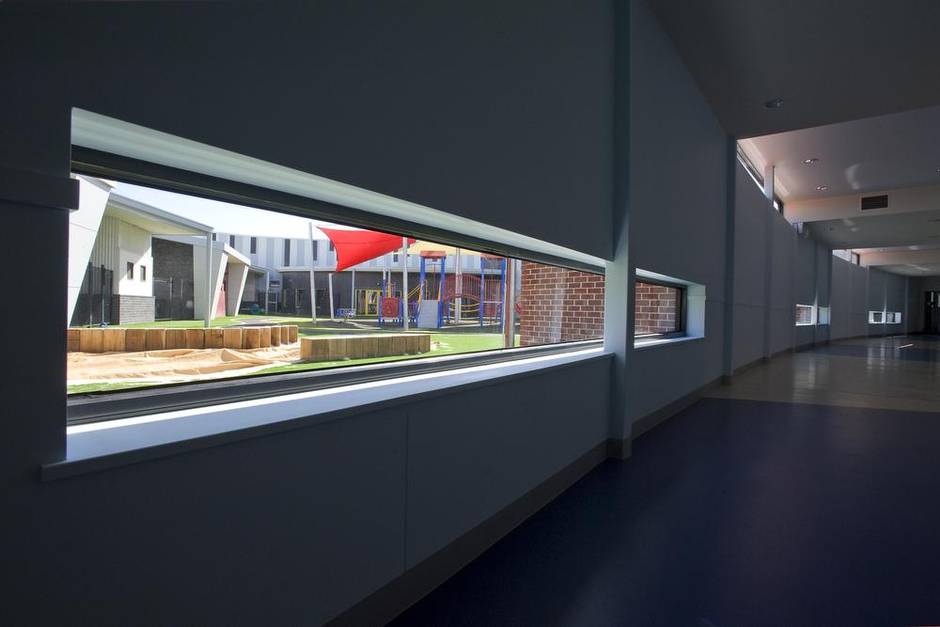 Rounded corridors at the Northern School for Autism in Australia give students space to move freely, without blind corners.

Each classroom setting has four different spaces in which students can move: a main class, which is relatively spare and lit by indirect sunlight; a smaller, semi-enclosed “withdrawal space”; a covered outdoor zone and an outdoor play area in a courtyard, which can both provide a calming effect and provide space for students to move actively. “A student may develop a habit of going out to calm themselves, but still be seen by the class and the teachers,” he says.

The school has three separate wings, marked on the exterior with bold colours. Within, the building “is quite subdued in its colour and its language,” he says. Corridors are rounded, without blind corners, and unobstructed – which allows students to move freely and to run. “They also have very few windows into the classrooms” to avoid, says Hede. “We’re trying to bring up their level of concentration by reducing the level of distraction.”

What student would not gain from those ideas? For children with autism, the effects are especially acute, but most of these design moves would benefit a general student body. In one well-designed school in Toronto I wrote about last year , the Fraser Mustard Early Learning Academy, the administration specifically requested a spare, colourless interior to aid with calm and focus.

However, it’s important to recognize that such specialized environments do not address the needs of most people with autism. They may or may not need support in their everyday lives – but everyone needs access to public spaces. Ne’eman suggests that a range of sensory options should be available to people in public places and at events. This has already begun; Ne’eman cites the rise of fragrance-free policies at many public institutions, and the presence of “sensory rooms” – essentially, quiet escape spaces – which are increasingly present at conferences and large public events. “There may be a limit to which we can address every need,” he says. “but there are many aspects of this diversity that can be addressed, even through programming.”

As Ne’eman points out, the range of needs among people with autism “is not substantially different than it is for other disabilities.” And while non-autistic people may win through sensory-friendly design, Ne’eman emphasizes that the needs of autistic people are, in fact, needs. “Sensory aggravations” may be insidious, with invisible but real effects on a person’s ability to interact with others socially or professionally. Take that theoretical smoke alarm beeping in a meeting; non-autistic people might not even notice, “but for autistic people,” Ne’eman says, the sound can be impossible to ignore, “and that can prevent them from participating.

“This needs to be reflected in a policy of customization.” 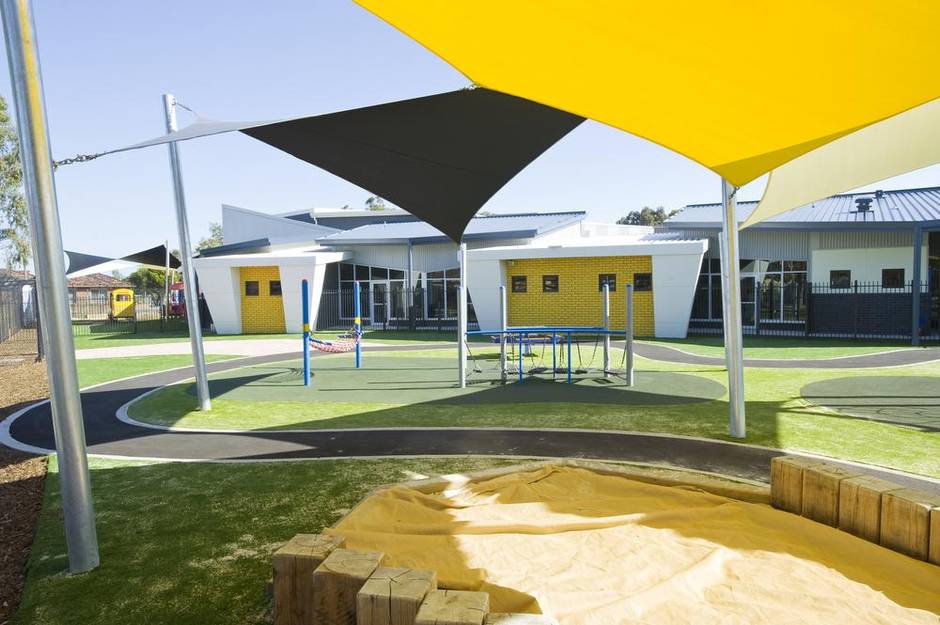 Covered outdoor areas at the Northern School for Autism give students a place to retreat if they feel overwhelmed.

Accessibility for autism is an issue of social justice that also has economic implications. Employers are realizing that autistic people have specific skills that can be of high economic value; Specialisterne, a Danish-based non-profit with a branch in Canada, has successfully placed thousands of people with autism into specialized jobs.

And people, in general, are diverse. Paron-Wildes argues that employers should allow individuals to choose a setting that suits them. The open-plan office evolved from an ideal of freedom into one of cubicled conformity, “a one-size-fits-all model,” she argues. “Now we’ve come to the realization that maybe that’s not the best thing.” And as workers are again being freed from the cube and given options – such as breakout spaces – why not let them choose their own levels of light or privacy?

Ultimately, Magda Mostafa hopes to see parts of sensory-friendly design adopted into the inclusive-design movement, and recognized by accessibility legislation. “I think it’s the responsibility of designers to account for all populations,” she says. As Ne’eman suggests, the diversity among the population of people might, and should, generate a deeper and more empathetic way of thinking about how everyone experiences a space – even when their experience differs in quiet but profound ways. “When we’re building,” he says, “we should be building for everyone.”

Products designed for kids with autism

As awareness of autism in children has grown, so has an array of products that provide special kinds of “sensory input” to help children regulate their emotions. Here are two well-designed examples: 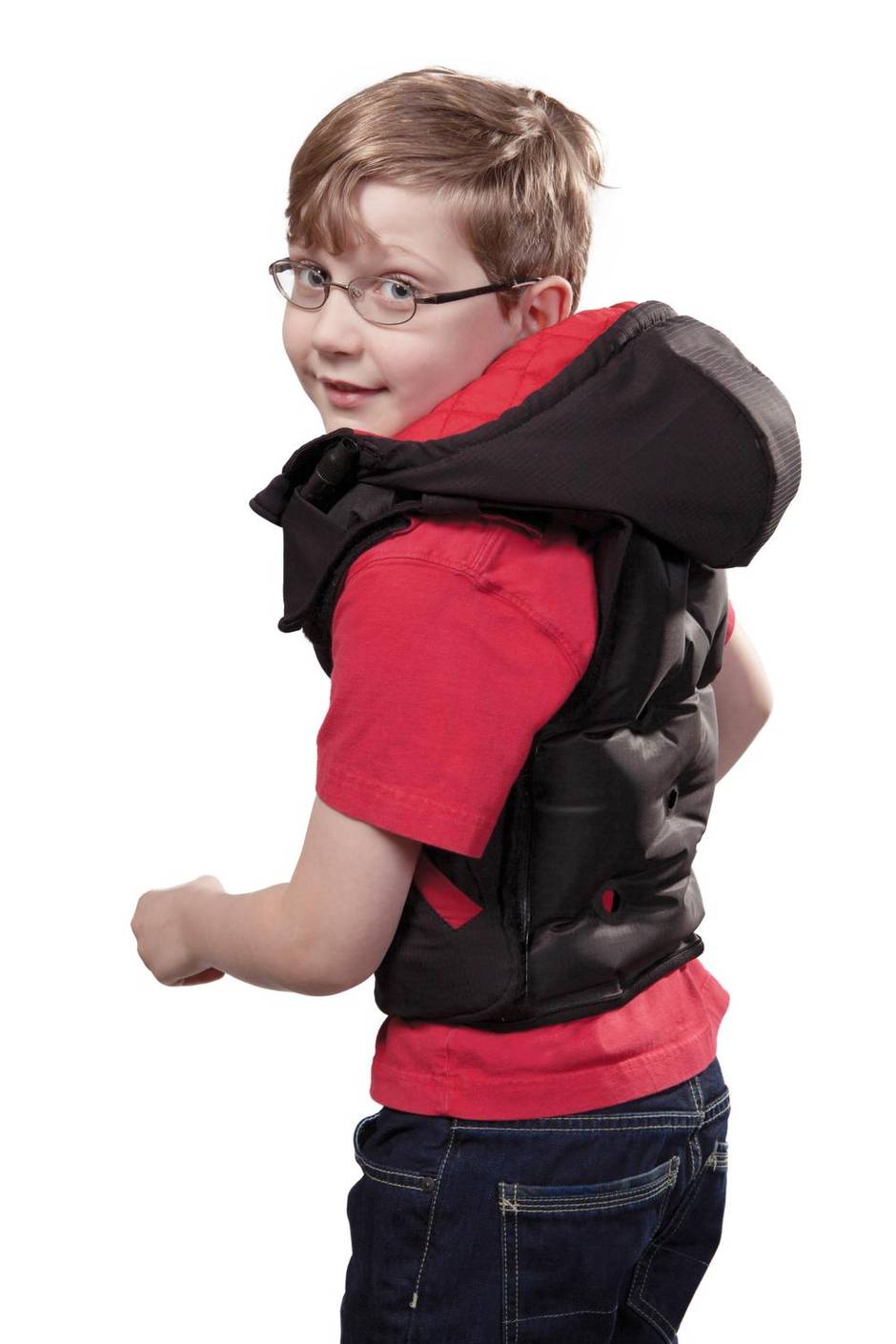 Many people with autism respond well to “deep pressure stimulation” – basically, the feeling of an even embrace. Heavy blankets can serve this purpose, as can heavy vests or other special garments. Snug Vest is a vest with an inflatable insert that applies pressure evenly to the torso; the user puts the vest on and uses a hand pump to adjust the pressure. “Deep pressure can bring people’s stress levels down and help them become calm,” says inventor Lisa Fraser. Unlike a heavy weighted vest, the Snug Vest applies pressure evenly to the entire body – and it resembles a standard sport vest, so that users can be discreet about its purpose in school or in the workplace if they choose. 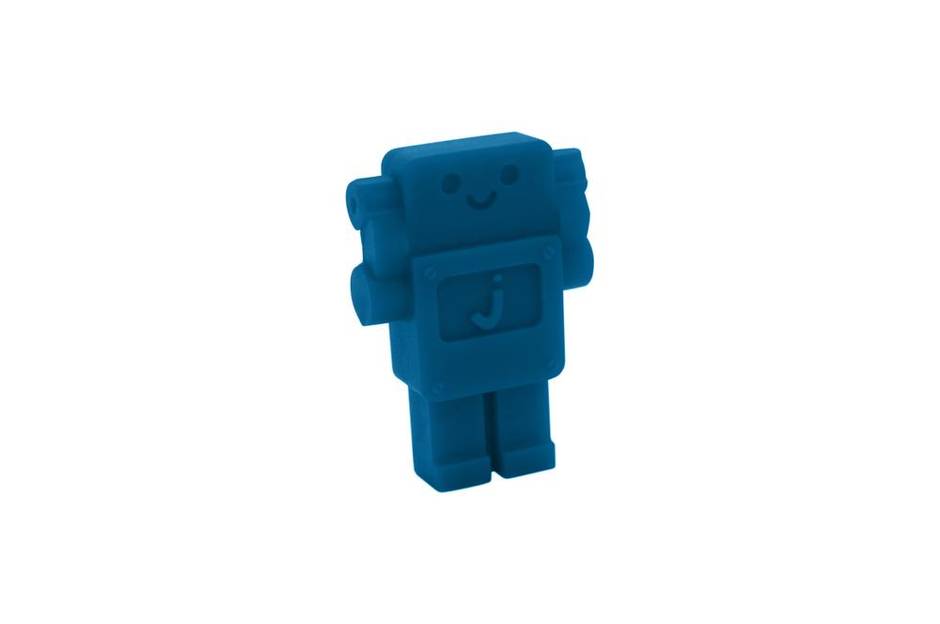 Some children with sensory needs are soothed by oral stimulation, such as a pacifier. Australian brand Jellystone developed a range of silicone jewellery for children that serves this niche; their “Juniors” line of pendants looks stylish on older children, who can use them for biting or soothing on.

Are commercial products necessary? Dr. Jason Nolan, director of the Responsive Ecologies Lab and EDGE Lab at Ryerson University and also autistic himself, believes that do-it-yourself solutions can work as well or even better. “The most important aspect of any object is the ability for it to be customized for each individual,” says Nolan, who is working on design tools that would serve people with autism. “For autistic individuals, feeling calm and relaxed can be the difference between being able to successfully engage with the world around them versus a meltdown. This line of thinking is very different from the kinds of therapies to try and change the autistic individual to fit in with their environment.”