We spend countless hours transforming our living space into a serene private retreat. It’s no surprise, then, that the same desire for an oasis amid the bustle of everyday life extends outdoors. Whether the site is a downtown condo or a rugged East Coast retreat, designers are bringing the comforts of indoors out, using materials such as Corten steel, Corian and more to make the most of nature’s beauty. 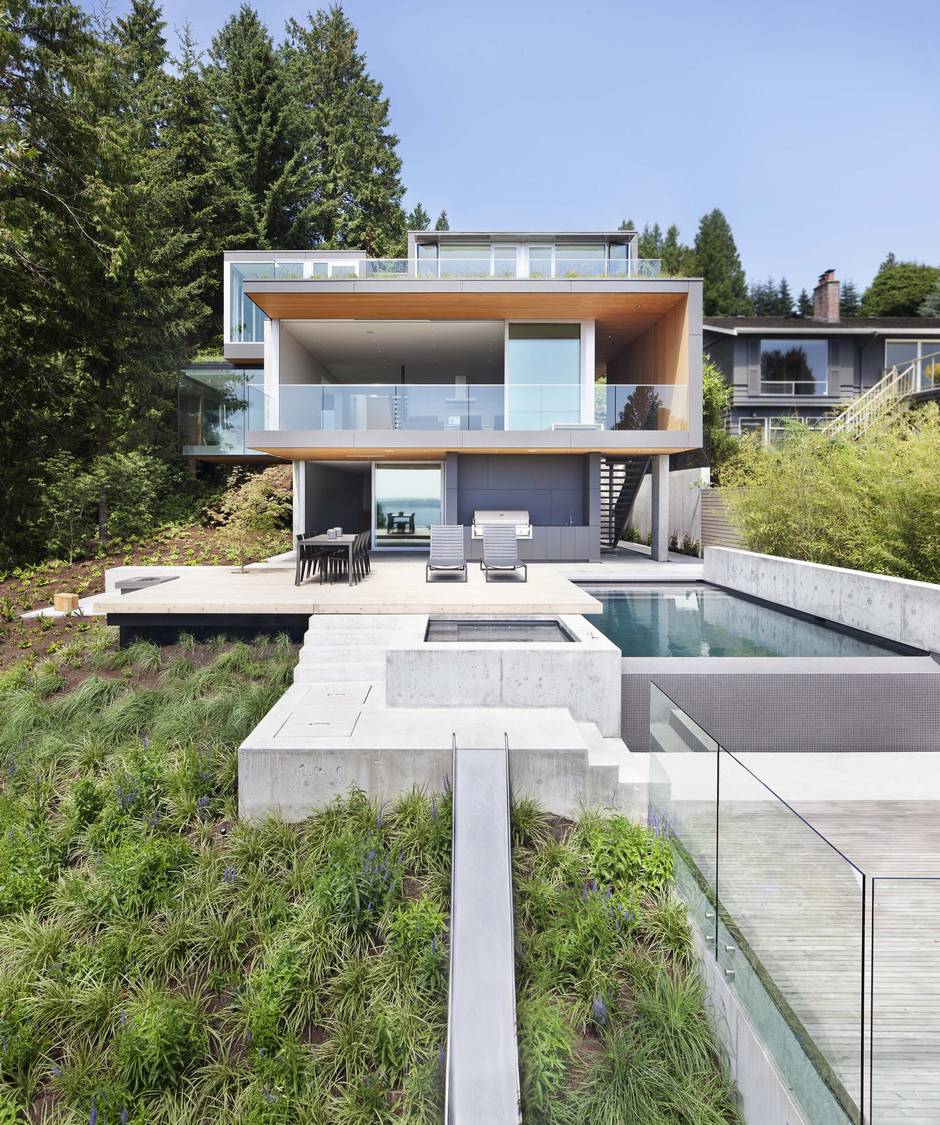 Situated on a steep hill in West Vancouver, the Russet Residence juts out from a forest of cedars and Douglas firs with an expansive series of boxy volumes. A deck on the home’s southern face mimics the multitiered architecture. “The deck … allows for a much more intimate connection to the landscape than artificially building up the grade and building a deck on top,” says Splyce Design principal Nigel Parish, who developed the outdoor landscape with Hapa Collaborative. The deck’s stained western red cedar base provides an airy setting for a concrete fire pit and pool, which sit on either side of a large dining area with a built-in outdoor kitchen. An adjacent hot tub offers views of the ocean beyond. 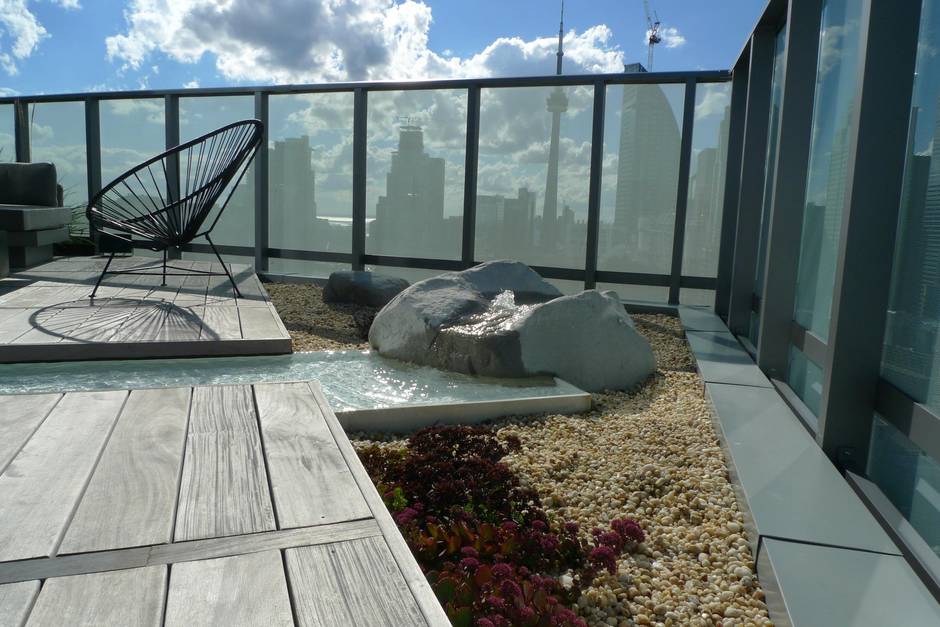 Thirty-three storeys in the air, with views of the St. Lawrence Market and the CN Tower, sits a 100-square-metre balcony with all the comforts of a Forest Hill backyard. Toronto studio Box Design extended the condo’s living space outward with a two-level deck made of ipe wood surrounded by a ground cover of stones and succulent plantings. Enclosed by shoji privacy screens made of ipe and Lexan (a lightweight polycarbonate), the balcony boasts many features one wouldn’t normally expect to see so high up: a Corian water fountain intersects the deck like a pint-size babbling brook, while a bulbous Corten steel fire pit provides visual interest even when not lit. Completing the look is an eclectic display of furniture selected by Christopher Wood of Living Arts Design. 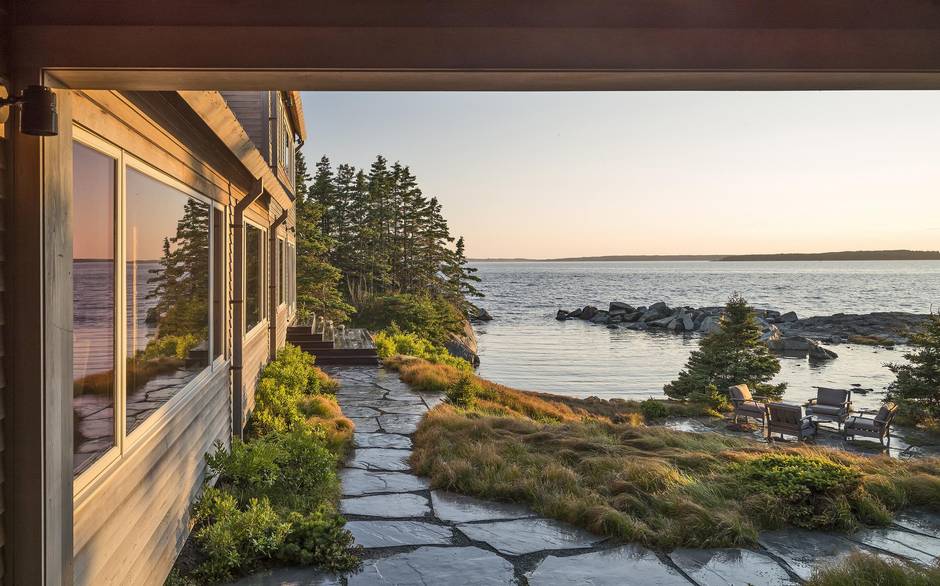 Burlington landscape designer Virginia Burt was called to Acadia Point, N.S., with a mission: heal the surroundings. Construction of a summer home on the site of a former whaling station had taken its toll on the surrounding virgin woodland, and Burt sought to rekindle the natural beauty with subtle details. Working with the terrain, she installed a slate-covered terrace on the west side of the lot, close to the water. A pathway lined with new plantings leads up to the house. “We looked to edit and create spaces … so you could get close perspectives,” Burt says. On the other side of the house, a deck made of ipe wood (a Brazilian walnut that is resistant to rotting, insects and mould) will turn grey over time. Though integral to the project, the deck is designed to disappear from view when looking out the windows. Beyond the deck, a raw concrete barrier and a breakwater of large boulders protect the exposed deck from unruly waves and storms with a nod to the rocky terrain. 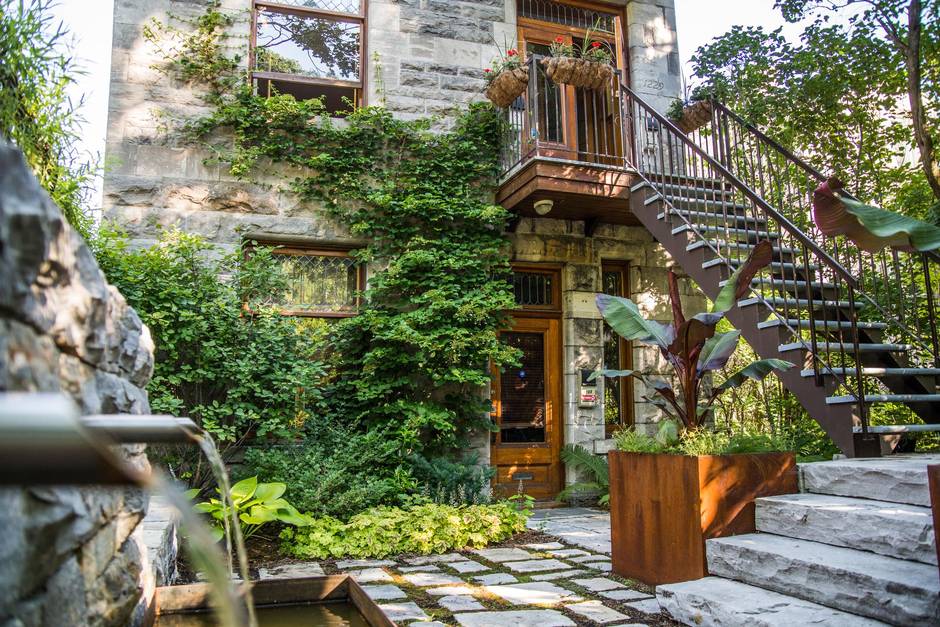 Creating a private retreat in an urban setting is difficult.

Creating a private retreat in the front yard of a triplex overlooking a bustling street in Outremont, Que., is nearly impossible.

But that was precisely the goal of landscape architects Hodgins & Associés, who created a tranquil space filled with exotic plants, ethereal night lighting, built-in seating and flowing water.

“My client liked the idea of having the surprise of the patio space hidden in front of the house,” says principal Myke Hodgins, who points to the water feature as the design’s showpiece.

Made of stainless steel, Corten steel and natural silica stone, the fountain was designed to mask the sounds of the busy street nearby and the comings and goings of neighbours – an elegant solution to an ever-present problem. 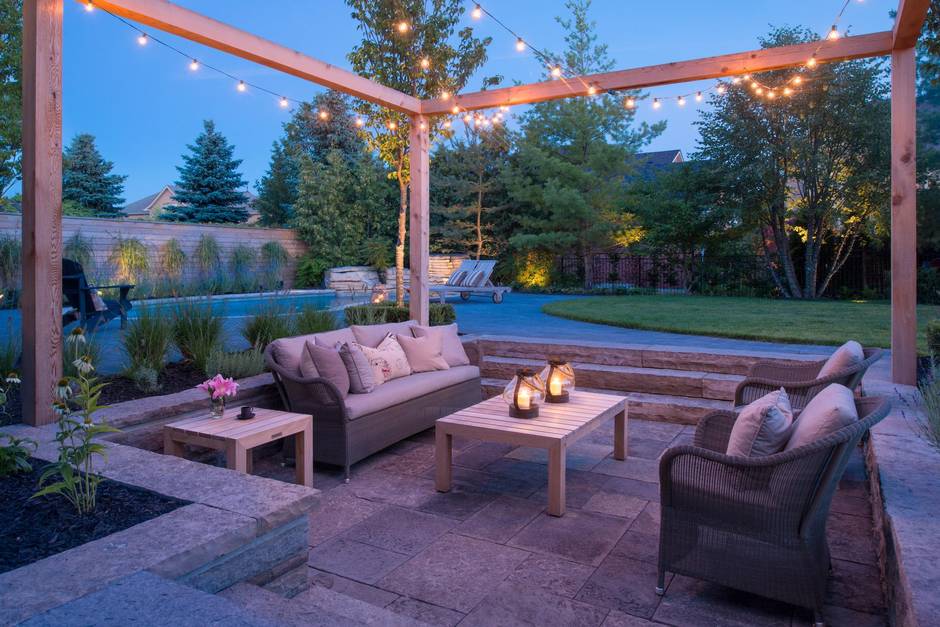 When asked to transform a backyard in Markham, Ont., into a relaxing environment evocative of the Muskoka region, Toronto designer Joel Loblaw combined pragmatic family-oriented amenities with serene natural accents.

Working with an existing pool and fountain, Loblaw added a cedar privacy fence and shed/change room with a chalkboard door (a design detail loved by the client’s children).

The sunken lounge area acts as the central hub of the backyard, with steps leading down to a sitting area under a cedar post-and-beam arbour that’s lit by strings of light at night (a sailcloth can be added in the day for sun protection).

The surrounding native grasses and lavender create ambience without blocking views of the pool, while at the back of the property, a gravel patio with a Corten steel fire pit and Muskoka chairs add to the cottage-life feel.