Jatoba, a chic, new restaurant in downtown Montreal, had been open a month and was drawing boffo crowds and reviews with a Japanese fusion menu devised by star chefs Antonio Park and Olivier Vigneault. But there was something about the dining room that didn’t sound right to co-owner Alexandre Besnard. The problem wasn’t when the place was full, but in the early evening, when the first diners were settling in.

“It sounded like a big empty room,” says Besnard, who was closely involved in designing Jatoba. “Voices were reverberating all over the place. It wasn’t cozy; there was a dichotomy between what you were feeling and what you were seeing.”

Apart from seating upholstery and a little grasscloth wallpaper, there wasn’t much to absorb sound in the rectangular dining room. So, Besnard installed 11 square metres of printed cloth Japanese banners along one long wall. He wanted a remedy that no one would notice as an attempt to tune the room. 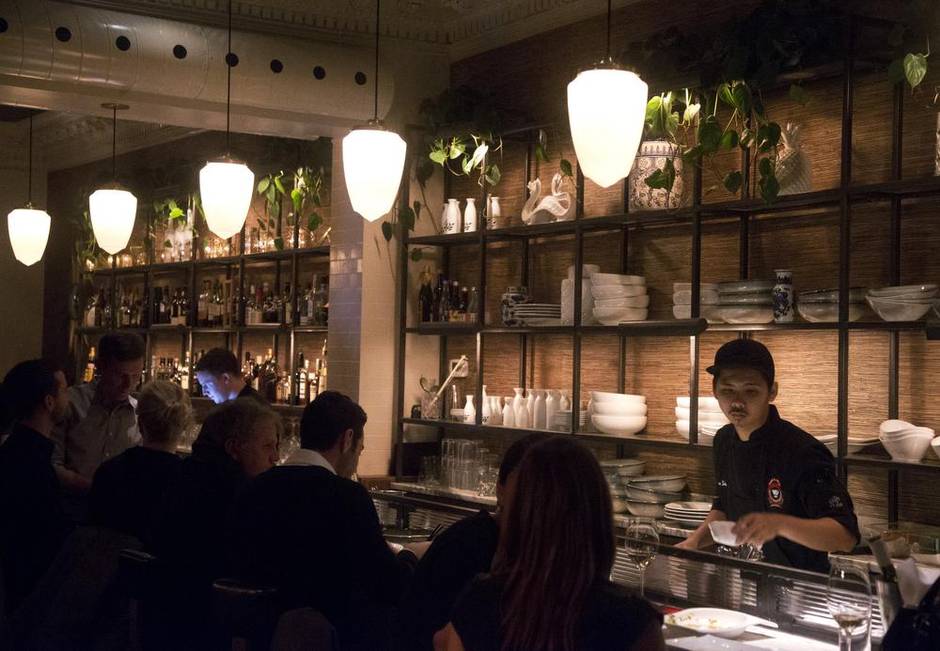 Jatoba in Montreal. (Christinne Muschi for The Globe and Mail)

That kind of acoustical subterfuge is becoming increasingly common in restaurants. Hard, sound-reflecting surfaces, such as wood, tile and exposed brick, are what people expect to see in cool eating places. And an expanding cohort of greying, affluent people want to dine in these hip rooms. But those diners tend to be more sensitive to noise than twentysomething hipsters – some of whom, for that matter, aren’t keen on eating in a place that feels as loud as a club.

Sound tolerance is personal, and people become resentful when their red line is crossed over dinner, as the comments on any online restaurant review site will show. Most people can think of an occasion when, after a cacophonous meal, the relative quiet of the sidewalk felt like a deliverance. So, restaurant designers, who think of their creations almost as stage sets, look for surreptitious ways to tame the sound while keeping the look edgy.

The designers of Carbon Bar, a barbecue place that opened in Toronto’s downtown last year, were told “to build an informal buzzy space, but where you could still have a conversation,” says architect Ralph Giannone, who designed the restaurant with his partner and wife, Pina Petricone. Specifically, the owners wanted “to create a provocative dining experience for a generally older clientele, which was underserved in the city,” he says.

The space, which had been City TV’s original studio, had a nine-metre ceiling and “felt like you were in a gym,” says Giannone. He and Petricone had the whole ceiling sprayed with sound-absorptive material, and painted it black. They put decorative sound baffles over the bar, threw in upholstered banquettes, and added a wooden curtain that had been carved with a router to break up sound reflections from other surfaces. 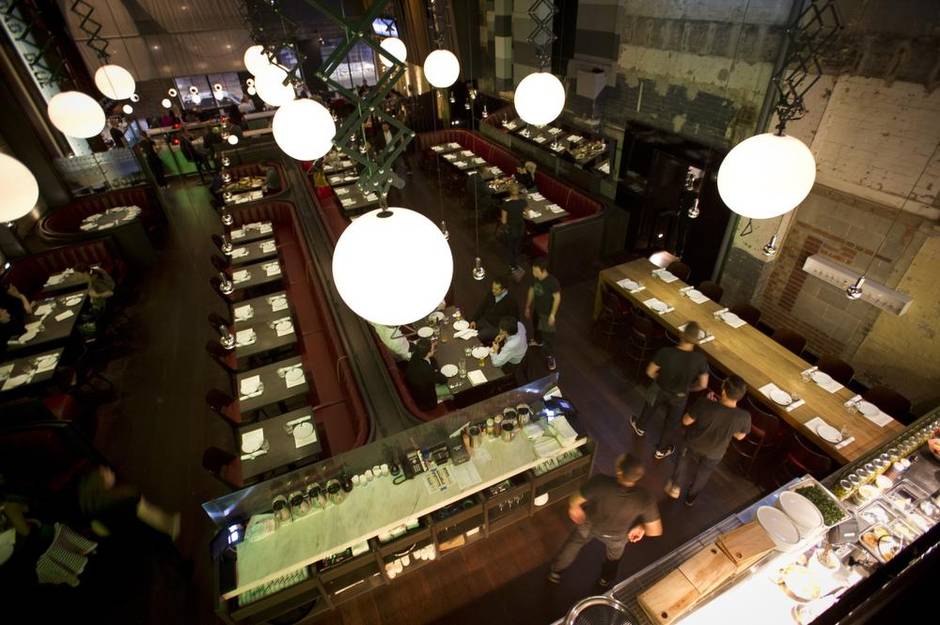 Carbon Bar was the antithesis of Petricone and Giannone’s first restaurant, Bar Italia. Twenty years ago, that narrow hard-surfaced eatery was in the vanguard of a restaurant explosion along Toronto’s College Street, but Giannone cringes a little when he talks about it now.

“It was deafening,” he says. “I designed a church basement for the hipsters of College Street.”

Restaurants are often boxy spaces that are prone to what acoustician John Coulter calls “the cocktail party effect” – the tendency of everyone in a room to speak louder as more people arrive. To stop that effect, Coulter says, you need to have some kind of sound-absorptive material covering an area roughly equal to half the floor area, assuming a ceiling height of 3.5 to 4.5 metres.

Carpets, soft upholstery and curtains do that job in many homes, but none of those things fits with current restaurant aesthetics. Designers end up spraying the ceilings, as at Carbon Bar, or installing absorptive material under table tops, where it can’t be seen. Certain kinds of plaster absorb sound, Coulter says, and you can hide sound-absorbing fibreglass in shallow boxes behind the kind of decorative fabric banners Besnard installed at Jatoba. Perforated sheets of metal and vinyl can also act as fronts for fibreglass, he says, and fit right in with the industrial look of restaurants filled with glass, concrete and distressed wood.

All these things cost money to do well, and are sometimes knocked out of the plan by other costs, or simply overruled by an owner who wants a certain visual effect no matter what. When Frederic Geisweiller moved his popular Le Sélect Bistro from Toronto’s Queen Street West to a new space on Wellington Street, Coulter advised him that the stamped-metal ceiling tiles he wanted to install over the bar would make it noisy. He did so anyway.

Another hard ceiling area over the front dining area made the space far too clamorous for the kind of relaxed bistro Geisweiller wanted. Giannone and Petricone, who had designed the new room and retained Coulter as acoustician, had to rush in some remedial acoustic tiling after the place opened. 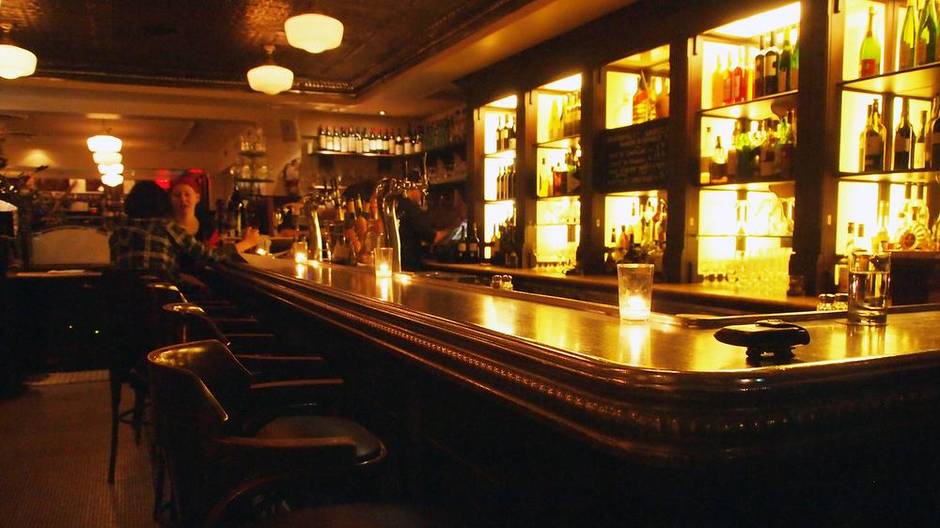 Le Sélect Bistro in Toronto. (Laura Serra for The Globe and Mail)

Le Sélect’s ceilings illustrate a fundamental fact of restaurant design: Even with informed advice at the scene, most owners would rather risk too much noise than too little.

“Sound is energy,” Besnard says. “I didn’t want Jatoba to be sleepy.” It was better to have to install fabric banners after the opening, he figures, than to have spent money in advance on measures that might have made the room too quiet.

A 1999 paper about restaurant design published by the Cornell School of Hotel Administration argues that people have two standards for judging restaurant interiors: pleasure, understood as “how much we like an environment;” and arousal, meaning “how an environment stimulates our perceptions.” By this measure, the louder the room, the more stimulating it is. But once it is perceived as too stimulating, your level of pleasure drops.

That may not be a bad thing, the paper says, if a restaurant wants to keep customers moving. By extension, you can assume that some very loud restaurants that have a young clientele are content to repel people who don’t like that degree of stimulation, because those people are probably too old for their target demographic.

A DJ at the end of the room and a powerful sound system say a lot about who is supposed to be coming for dinner.

Last weekend, I had a late supper at Terroni, a popular eatery on Queen West in Toronto. The narrow area where I sat was crowded with tables full of mostly young people shouting in each other’s faces. It would be an easy thing to add some acoustic tile to the ceiling in that shoebox space, and I’m sure the owners knew it. But why bother? The crowd they wanted was already there.

That kind of selective acoustics is also being practised at Carbon Bar, to attract the very people who would find Terroni too loud. As the population greys, we’ll no doubt see more restaurants that flaunt a hard-edged youthful look, but that find cunningly surreptitious ways to tone down the sound.