Last year, William and Laura Baird got rid of half of their kids' toys, half of their kitchen's contents and a third of the family's clothes. It wasn't just de-cluttering – they also ditched almost three-quarters of their home's square footage, moving from a three-bedroom house into the 440-square-foot cabin on wheels that they share with their three children, three cats and a hamster.

"I was looking for less to clean," Laura Baird said. "Less upkeep, less impact on the environment, less electricity, less use of resources."

Living with less is the philosophy behind the tiny house movement – the rising popularity of scaled-down homes, usually less than 500 sq. ft., some as small as 80 sq. ft.

Living in these small spaces does mean less responsibility (low prices means many are mortgage-free) but a growing group of tiny-house dwellers are far from rootless vagabonds. Like the Bairds, they're parents with young children.

Laura, a nature educator at a state park, and William, a philosophy professor, have gotten creative to maximize space in their new home, which is parked in a campground in Myrtle Beach, S.C. (they plan to eventually move it to their own land). They've built a fold-out table for family meals, installed bunk beds for their eight-year-old twin daughters and designated their four-year-old son's sleeping loft as the playroom. Laura even ripped out wall panels in the kitchen to build a spice cabinet when she discovered three inches of wasted space.

The family is still trimming down their belongings and settling on where to store things (bulky towels are especially challenging) but the parents like that they spend more time together as a family and more time outdoors.

"We're figuring out how to compromise more, even if it's just, 'I'm going to the bathroom now and you can go after me,'" Laura Baird said. "It's not as convenient as having a big house where each kid can have their own room, but it's not necessarily a good thing that everything's convenient."

Eight-year-old Jessica Baird agrees that the smaller space has brought the family closer. Her favourite part of living tiny: "Every room has at least one cat in it," she said.

Small-space living with kids in tow means balancing a commitment to minimalism with the realities of family life, said Derek Diedricksen, a tiny-house designer and builder and author of the new Microshelters: 59 Creative Cabins, Tiny Houses, Tree Houses, and Other Small Structures.

"Just because you have a space that a kid can sleep in, that's not going to be enough," he said. "You need some common living and breathing and moving space. It shouldn't be a jigsaw game of Jenga to be able to sit down."

In addition to having a roomy common area, Diedricksen suggests thinking about privacy, including isolating adults' sleeping space and insulating interior walls so everyone can get some peace and quiet. Other tips when designing a tiny family home: Don't skimp on windows – they make a small space feel less claustrophobic – and plan for storage, including offsite space if necessary. Diedricksen recommends storage sheds, which can double as offices or even playrooms in a pinch.

As kids grow, tiny houses can become especially challenging, so some families add separate dwellings for teenagers. Tiny-house designers Andrew and Gabriella Morrison built their 15-year-old daughter a 120-sq.-ft. cabin and their 19-year-old son a 160-sq.-ft. treehouse near the family's home.

"If parents have a good, open relationship with their teens and teens are making good choices, it's okay to create a separate sleeping space for teenagers where they can be and have their friends over and give the parents privacy too," Gabriella Morrison said.

The couple, who run the website TinyHouseBuild.com, live in the modern 207-sq.-ft. house on wheels that they designed in Ashland, Ore. They warn that while living small is rewarding, families used to a larger home should prepare for an initial adjustment – and shouldn't panic when things get tough.

"There is going to be a period where it's super uncomfortable," Gabriella Morrison said. "With perseverance and patience and kindness and willingness to change, that dynamic can change so quickly. The beauty of tiny house living is that it's almost impossible to avoid each other, and the family's really going to be forced to listen to each other. You can't just escape to your bedroom that's hundreds of feet away."

Better communication is a benefit that the Bairds said they already recognize from their family's year in the cabin.

Their kids are "learning how to talk to us and to each other about what they want and if something's not working," Laura Baird said. "And part of the discussion is why we don't want all the stuff – the resources being used and the whole process of consumption and where our things come from. We point out, 'it only took two hours to clean this house, isn't that great?'"

Why this is Michelle Calvert’s favourite room
October 10, 2014 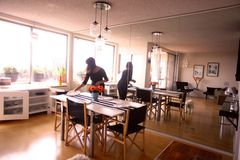 This well-designed corner in a tiny Toronto condo makes plenty of room for party guests
July 17, 2015 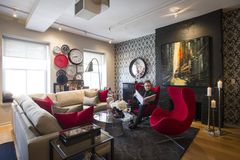 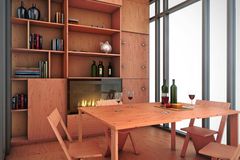