Battery Park, New York City’s 25-acre, tree-filled oasis at the southern tip of Manhattan, is about to become even more welcoming. The Battery Conservancy, the non-profit organization that supports the park, recently wrapped up a two-year competition for new signature seating, something more inspired than the basic benches already there. The winning entry, a perforated steel chair called Fleurt, is a whimsical, floral-shaped design that could have been plucked from a Marimekko print. In 2015, 300 of them will dot Battery Park’s newly renovated central lawn. New Yorkers can thank Toronto’s Andrew Jones when they settle into one.

Fleurt is only Jones’s second major public design, but the first was equally prominent: He is also responsible for the Jackie-Kennedy-pink umbrellas in Toronto’s acclaimed Sugar Beach, a Claude Cormier work that the city’s Ford brothers tried to make disingenuous hay out of recently by citing its supposedly exorbitant cost (four years after it was installed). On Oct. 15, Jones won the juried New York competition (including a $10,000 cash prize) by beating out almost 700 entrants from 15 countries. For the final round, his idea had to pass a sit-off, which saw the general public casting votes for their favourite among the five top proposals after trying them out. Nearly 4,000 people cast a ballot, which Jones won handily. 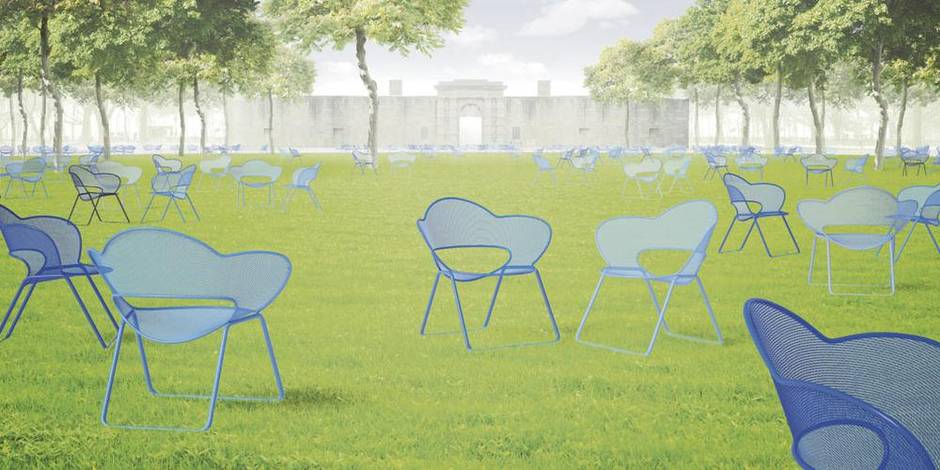 The Fleurt chairs – “it’s pronounced flirt,” Jones said in a recent interview, explaining that “it’s a blend of fleur [French for flower] and flirt” – are meant to be clustered together, like a bouquet (and to encourage unexpected encounters). Although the competition stipulated that the designers only envision a single seat, Jones started out “as though I was painting a scene, and thinking about how the 300 chairs would look altogether.” He wanted them to appear as though they were sprouting out of the ground, all at once, maybe like tulips in spring.

At 47, Jones has had a lustrous if under-the-radar career. His recent foray into public furniture notwithstanding, he is best known for his high-end residential and office seating and work surfaces, produced by the country’s top manufacturers (including Keilhauer and Teknion) and coveted by discerning buyers. His Wall Bureau, a fold-up standing desk, has been in the Royal Ontario Museum’s permanent collection since 1999. His Gym chair, a candy-hued stacking seat, has been in the permanent collection of Toronto’s Design Exchange since 2003. Rachel Gotlieb, who was the founding curator of the DX, describes Jones’s work as “a continuation of the modern canon without repeating it. His pieces have a great personality, with a touch of whimsy but not overkill.”

Andrew Jones’s other chair designs include, from left, the Woodrow, the Gym and the Oslo.

Jones’s portfolio also includes architecture and interior design for exclusive clients. Among other projects, Jones modernized a stone cottage for Kelvin Brown, the chief executive officer of the Gardiner Museum, Canada’s national museum of ceramic arts. “I’m thrilled when a designer like Andrew gets recognized,” Brown said recently. “Because he’s subtle. And in a world of starchitects and grand gestures, where everything is so blatant, subtlety is rare.” The designer, who studied furniture design at the esteemed Royal College of Art in London before a degree in architecture from the University of Toronto in 1991, also converted a two-bedroom co-op for William Thorsell, a former editor-in-chief of The Globe and Mail and the Royal Ontario Museum’s CEO from 2000 to 2010. “He is both very gentle and has a strong vision at his core,” says Thorsell. “He has a tremendous sense of what will survive over time.”

Projects like Battery Park are particularly meaningful to Jones because “I have long been interested in designing for the public realm. I like the idea of contributing things that the majority of people can enjoy.” 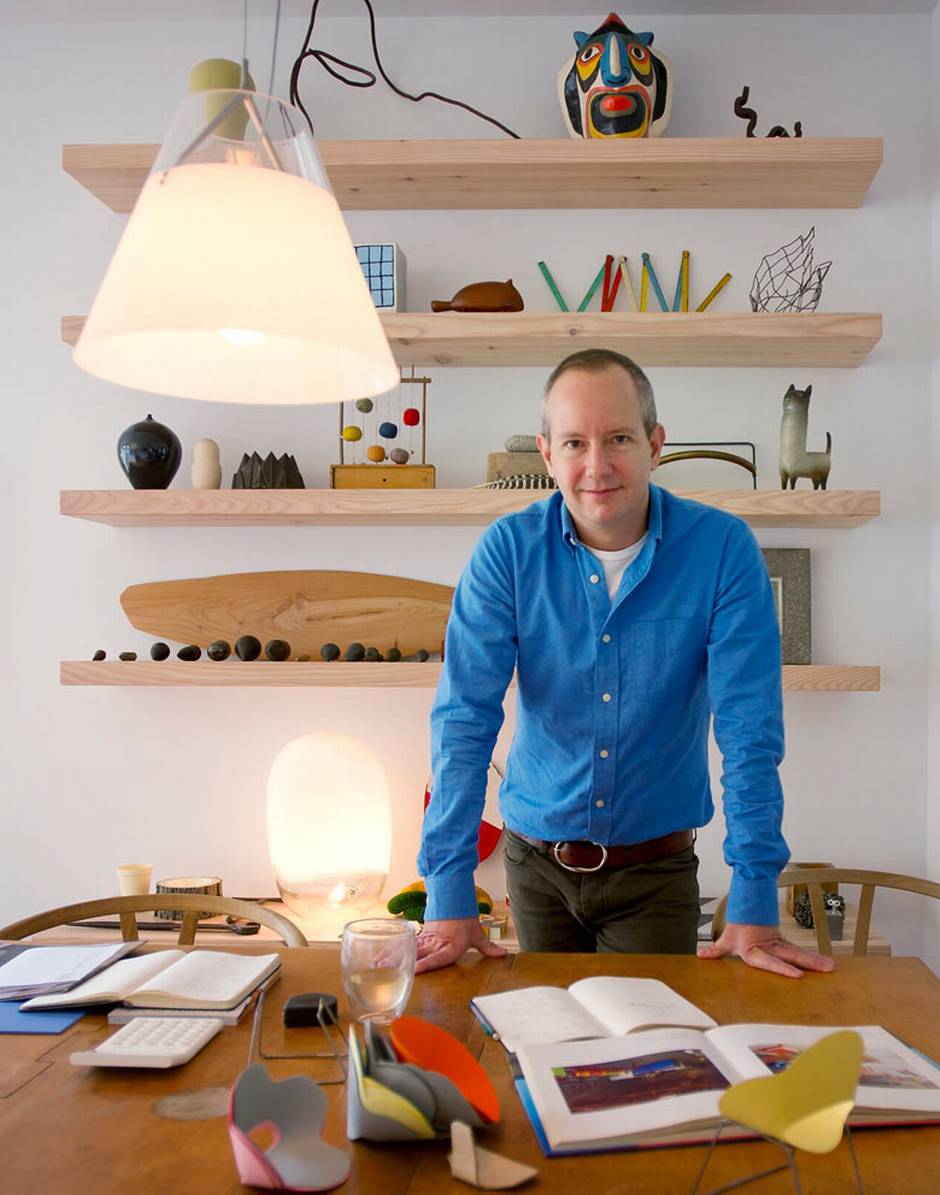 Jones’s first and, to date, most famous public project, the umbrellas for Toronto’s Sugar Beach, was completed in 2010. Although the structures are made of heavy, durable fibreglass, they are crafted to look as thin, light and ephemeral as fabric parasols. This is mainly because the edges are incredibly thin: From the side they look as though they are composed of a single, flimsy sheet (in fact, they are made up of two sandwiched layers that conceal all the fasteners and joinery that make the umbrellas so sturdy).

Although the umbrellas became the target of a “gravy train” tirade by disgraced mayor Rob Ford this past summer – four years after they were unveiled, because they cost $12,000 each – the structures have been built to last, suggesting that Jones knows what he’s doing. Among other features, they are UV-, rust-, weather-, rodent- and vandalism-resistant.

“It’s easy to take a design like that for granted because so much of it is hidden. It disappears,” says Cormier, the Montreal-based landscape architect who oversaw the project. “But if they were clunky, they wouldn’t work.” Ultimately, “the criticism doesn’t matter because people love the umbrellas. Andrew is capable of doing something magic. He makes people happy.”

It was the popular success of Sugar Beach, Jones says, that prompted him to enter the Battery Park competition: “I really wanted to design a chair that everyone could connect with, from the first ah-ha moment upon seeing a garden of flower chairs pollinated with people to enjoying hours of comfort – sitting, reading, talking with friends, people watching and being part of the scene.” 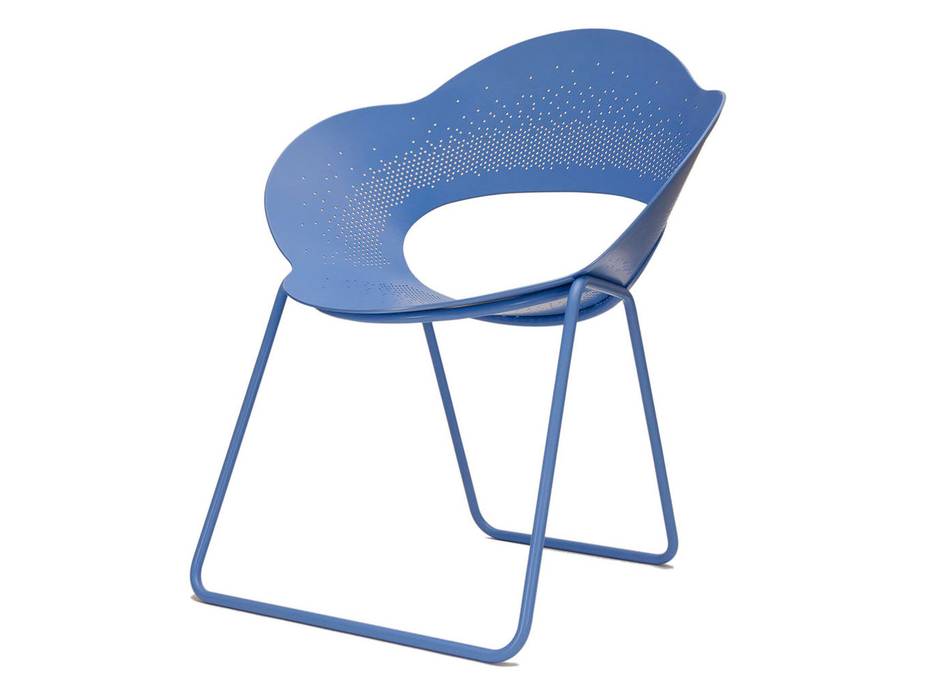 There is more, however, to Jones’s poetry than mere aesthetics: Fleurt’s petal is also ergonomic, comfort being one of the main reasons it was so popular during the public voting. “Curves are nice because we’re curved,” Jones says, adding that Fleurt’s wide arms and gently sloping sides and back accommodate a myriad of restful positions.

Even though the New York competition is over, there is still “a long process ahead,” Jones says, referring to the manufacturing of the perforated steel seats. “I’m hoping we produce them in a range of blues. The lawn is surrounded by mature trees that dapple the light. I’m interested in how the colours will change given the different lighting conditions. When the sun appears. When the light flickers through the leaves.”