Skip to main content
AMANDA RUGGERI
Special to The Globe and Mail
Published May 20, 2015

In a corner of Istanbul’s Design Biennial late last year, photographs of bizarre creatures sat alongside more conventional displays of product design and typefaces. Diaphanous globes, like transparent balloons, clung to the mossy trunk of an oak tree. Rust-coloured patterns ran across green leaves, as if the foliage had been decorated with henna. On the forest floor, a slug-like creature slithered, its back dotted with gold markings; in another photograph, what looked like a porcupine without a head crawled over the dirt, its quills tipped blood-red.

But as strange as the creatures looked, what they actually are is even stranger. Not quite living things, not quite machines, these imagined prototypes inhabit a dystopic, future world – a world in which they had been created to solve the problems of the living. The porcupine, for example, is an Autonomous Seed Disperser, described as a device that would collect and disperse seeds to increase biodiversity. The slug would be programmed to seek out acidic soils and neutralize them by dispersing an alkali hygroscopic fluid. 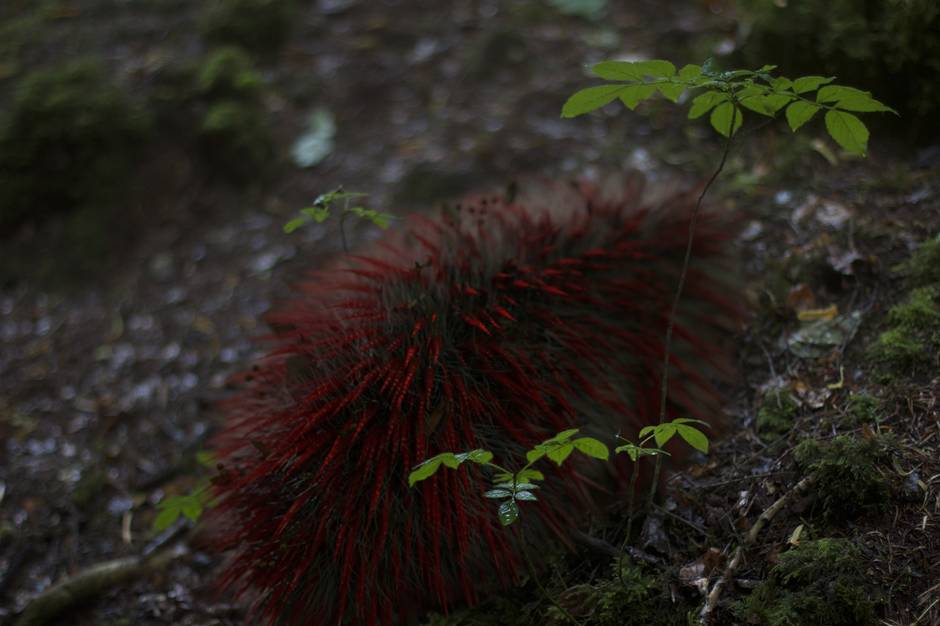 Autonomous Seed Disperser. Alexandra Daisy Ginsberg’s proposal may just be a thought-provoking concept, but it’s one with all of the elements of extreme synthetic biology. A porcupine-like device that collects and disperses seeds to increase biodiversity, its rubberized spines flex to release seeds it has collected, a six-base DNA code means the chassis is made from inedible proteins so other animals don’t eat it, and the lifespan is limited to 600 days.

They are the designs – and thought experiments – of London-based Alexandra Daisy Ginsberg, designer, artist and lead author of the book Synthetic Aesthetics: Investigating Synthetic Biology’s Designs on Nature. In her project Designing for the Sixth Extinction, which after Istanbul is now on display at the Design Museum in London, Ginsberg imagines what a synthetic biology-designed world would look like – and whether it’s desirable. “A lot of the discussion in synthetic biology is, ‘Oh, we can use it to save nature, we can engineer bacteria to clean up pollution,’” she says. “But actually releasing bacteria that are engineered – how are you going to control it? If you’re using one technology to clean up a past technology, you then have to clean up the new technology. So this problem-solving cascade might not solve any problems.”

In one sense, synthetic biology is the latest phase of genetic engineering. As the next, and more “extreme,” phase, it’s already controversial, stirring up old debates over what happens when humans intervene to this level. In another, it’s a more amorphous and potentially far-reaching field, not limited to DNA-swapping, and especially notable for its use of engineering and design principles – part of the reason so many designers from non-science backgrounds have become involved.

Although definitions of synthetic biology vary, it generally refers to designing living things for man-made solutions, particularly by applying engineering principles, such as standardization, to make biology easier to manipulate. In the past, genetic engineering provided one-off solutions: Think the Flavr Savr tomato, bred in 1994, which was modified so that the gene that made the fruit start to rot was deactivated (allowing it to fully ripen on the vine). Synthetic biologists, on the other hand, want to figure out how to insert that same gene into any organism, or a number of engineered genes into a single organism, in easily replicable, relatively cheap ways. In some cases, they want to build entirely new organisms.

This approach is now possible because of the sheer amount of data gathered over decades of genetic engineering. Today, researchers say creating genetic code is akin to typing with a word processor, rather than by cutting and pasting whole sentences from other books. 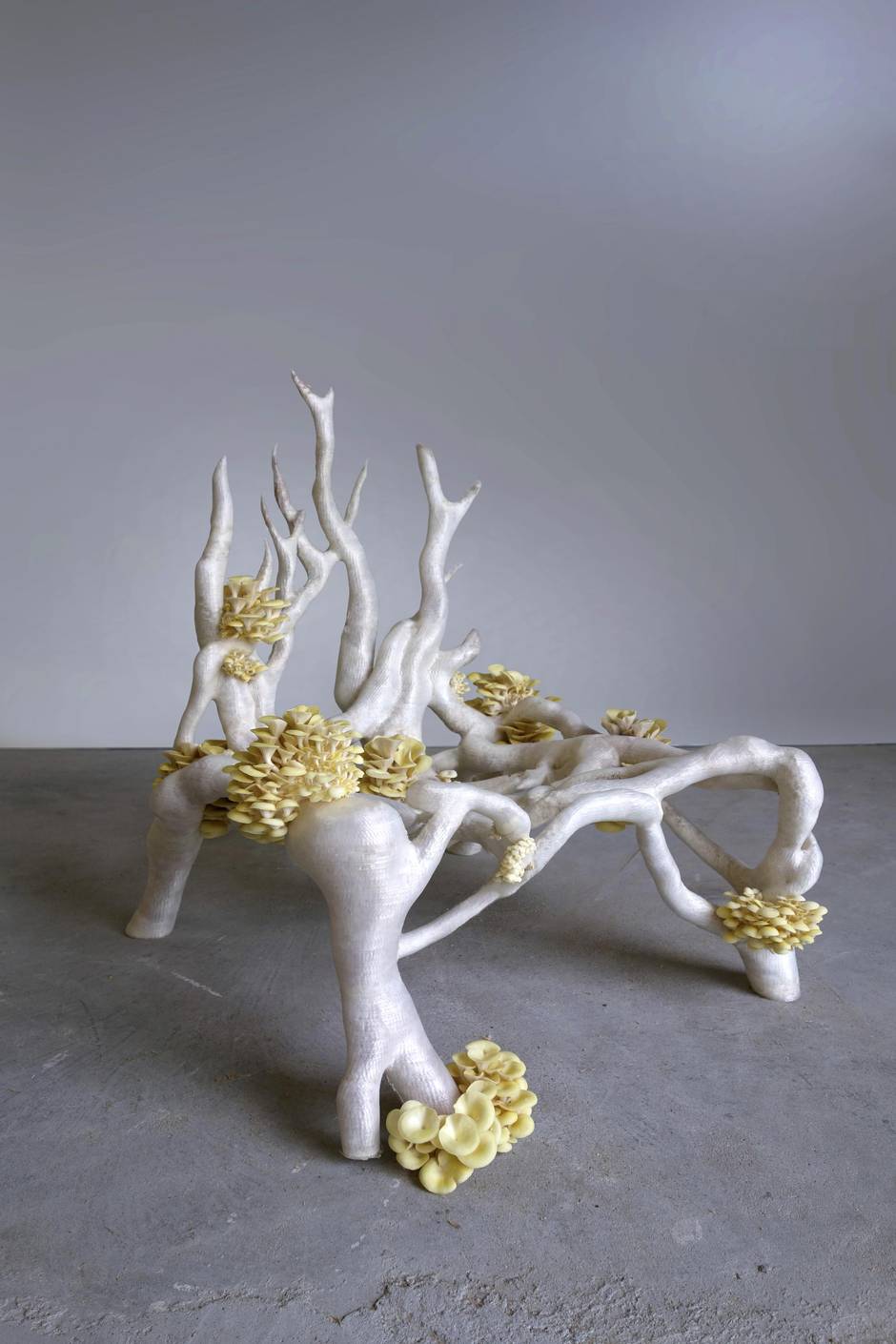 Mushroom chairs. Eric Klarenbeek’s studio was the world’s first to 3-D-print living mycelium, the vegetative part of a fungus that is strong, elastic and fast-growing. Because mycelium produces oxygen, and because the printing process requires no heating, the Dutch designer says creating these chairs could have a negative carbon footprint.

At the 1,600-square-metre warehouse-turned-lab at Ginkgo Bioworks, a biotechnology start-up in Boston, for example, yeast ferments in hundreds of glass vials. The purpose isn’t to create beer or bread, but the fragrance of a rose – using the flower’s own genetic pathways.

In what the company calls the “world’s first organism-engineering foundry,” engineers introduce the rose’s genes to yeast, where the microbes ferment, converting sugar into various scented rose compounds. “Since all of life is related via evolution, yeast and rose (and people, and everything else) share many of the same core enzymes in metabolism,” says Patrick Boyle, the company’s organism designer. “What we do is add enzymes from rose to yeast that take these core, central metabolites and convert them into the fragrances that we’re interested in.”

Because a rose’s own genes are being used, he says, the fragrance profile is richer and fuller than a chemical version, making it an ideal option for perfume-makers. Yet, because engineers can decide exactly which genes to introduce – and can splice and dice genetic code from different flowers to create blends of fragrances that don’t exist in nature – it’s a creative process, too. 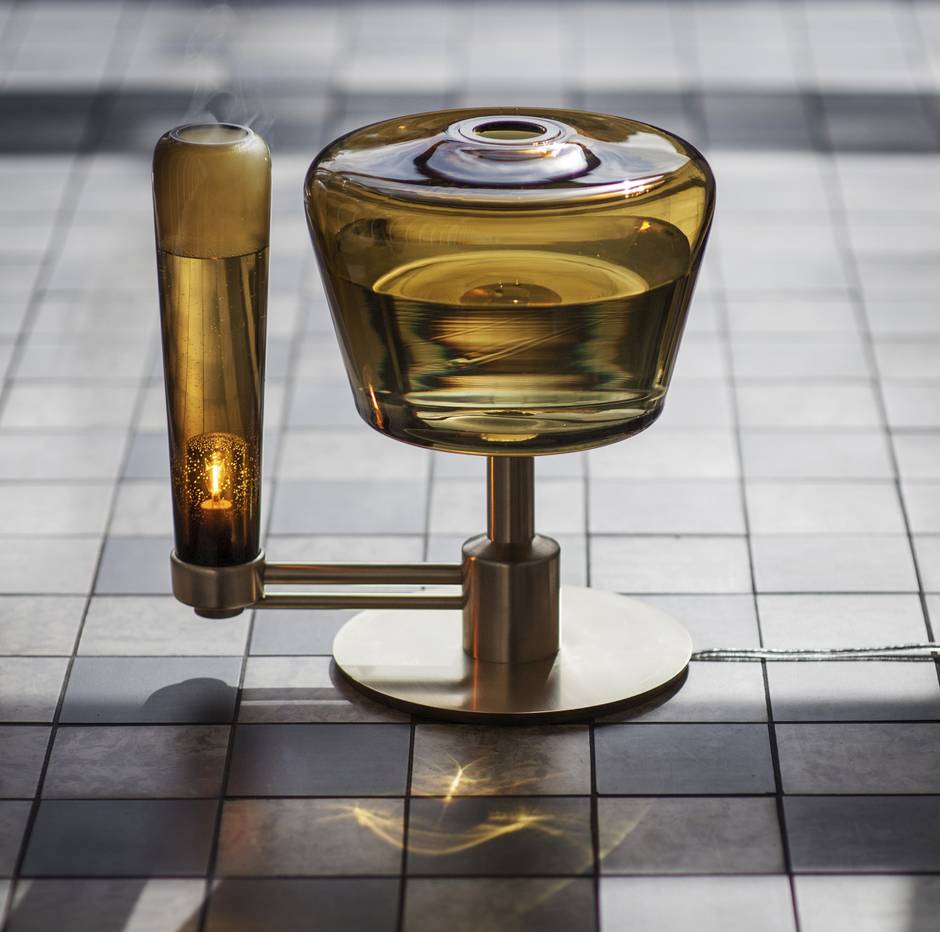 Ambio lamp. Dutch designer Teresa van Dongen designed this bioluminescent lamp, powered by bacteria isolated and grown in seawater from the skin of an octopus. The living fluid needs to be replaced every day, a drawback van Dongen is working on solving. (Hans Boddeke)

Simple, one-celled microbes, such as the yeast of the so-called Cultured Rose, remain the target of most synthetic biology research. Bacteria is another. Designers have engineered various strains to uptake the fluorescence or bioluminescence gene from organisms such as deep-water jellyfish or octopuses; introduce the bacteria and gene and voilà – glow-in-the-dark bacteria. Amsterdam-based designer Teresa van Dongen has figured out how to isolate photobacterium phosphoreum from the skin of an octopus and use it to power a lamp. But the synthesis can be more than a party trick. The bacteria’s glow can be engineered to switch on or off depending on whether they contact a certain pollutant in water, for example.

Designing even more complex organisms is the inevitable, and controversial, next step. And those designs have already begun. The British company Oxitec has designed a sterile male mosquito. When the bugs are released into nature and mate, no offspring result, reducing the population or eliminating it altogether. This could be a solution to dengue fever, a mosquito-carried disease that infects more than 50 million people each year: In field trials in Cayman, Panama and Brazil, the wild population of the dengue-carrying mosquito species was reduced by 90 per cent. Yet, as a genetically engineered solution, it also makes some skittish. The consequences of such manipulations remain unforeseen, they say. Proponents counter that the solution is more elegant, and safer, than the current practice of spraying chemicals.

Even so, the engineered mosquito leads to overarching questions: What are the dangers of tinkering with life? Could this cause a slide toward eugenics? Currently, the field doesn’t have an established ethics oversight process, something some critics are pushing to change.

Meanwhile, although synthetic biology is most closely associated with genetic engineering, the concept of harnessing organisms for specific purposes doesn’t have to mean manipulating DNA. In fact, some researchers say there are times when it shouldn’t. “We are going to limit ourselves in the potential of the field by not caring about all of these amazing things biology does, and only looking at DNA,” says Christina Agapakis, a biologist with a PhD in bioengineering from Harvard and a designer who teaches workshops on synthetic biology at the Art Center College of Design in Pasadena, Calif. 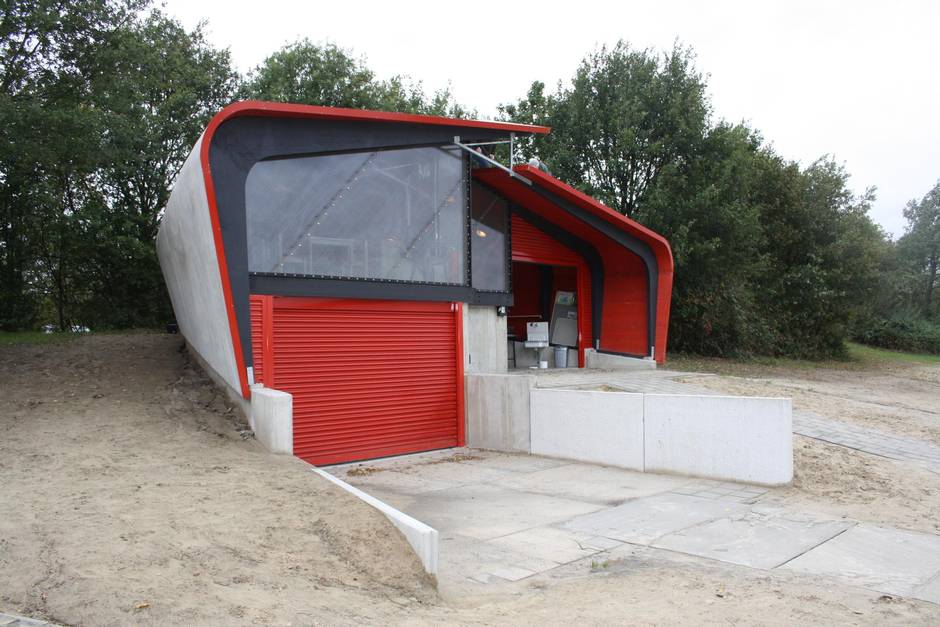 Self-healing concrete. Delft University of Technology researchers developed a new kind of concrete: one mixed with particles of bacteria that heals itself. When the concrete cracks, the bacteria activate and start converting the feed into limestone – and sealing the crack.

Take the “bioconcrete” developed at the Delft University of Technology in the Netherlands. To stop concrete from cracking, researchers infused it with a type of bacteria, naturally found in highly alkaline lakes or inside certain rocks, that induces the formation of calcite. The bacteria heal the concrete by sewing up cracks as they start – no genetic engineering needed.

Other designers are playing with mycelium, the thread-like, vegetative part of a fungus that serves as its root structure and is known for being strong, elastic and fast-growing.

“Mycelium’s role in nature is to decompose debris found on the forest floor. At Ecovative, we’re harnessing mycelium’s ability to bind loose particles together as it branches out as a web to decompose these materials,” says Ecovative’s Melissa Jacobsen. “Simply put, we’re using mycelium as the resin in our materials.”

Some of the upstate New York company’s top products, Jacobsen says, include Mushroom Packaging, a compostable alternative to plastic foam, and Myco Board, which replaces wood products, such as particleboard.

Some researchers are examining mycelium’s genetic code to figure out how to use its properties for other purposes. But others are manipulating it as it is, engineering it to create bowls and bricks, clothing and insulation. One researcher even used it to grow shoes.

Despite the field’s potential to help create a more sustainable future, at present it might not be changing much. Most of the industry is focused on using organisms as another tool in the same tool kit: engineering oils from plants to make new kinds of motor oils and plastics, for example. And even projects that seek to replace man-made materials with biodegradable, living ones can carry large carbon footprints. 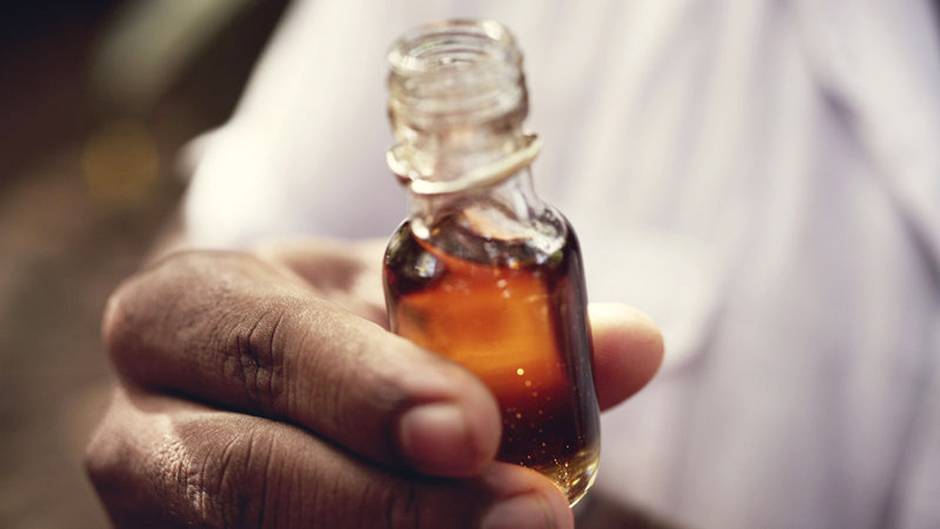 The new vanilla. Like roses, vanilla orchids are expensive and labour-intensive to grow. Enter Swiss biotech Evolva’s vanillin, developed last year, made by introducing vanilla’s genes to yeast to ferment the compound – and already the subject of anti-GMO campaigns.

“There’s a lot of talk of synthetic biology as being new and revolutionary – and yet it might leave our supply chains in place, and keep our reliance on oil, and keep us driving around in cars,” says Jane Calvert, a reader in Science, Technology and Innovation Studies at the University of Edinburgh who studies synthetic biology’s social dimensions.

All of these controversies are ones that Ginsberg tries to provoke scientists and the public alike into thinking about. In particular, she says, thinking of synthetic biology as a panacea for nature’s problems misses the point, since it’s easier to save what we have than to introduce new fixes. Her porcupine-like Autonomous Seed Disperser is one example. To keep it from affecting wild animals, the device’s DNA would be programmed to make it inedible and to include a “kill switch” that would end the organism at 600 days. Synthetic biologists often talk about incorporating kill switches into organisms as a way to keep them from spreading. But because most of the talk is about simple organisms, such as bacteria, Ginsberg says, what that really means is hard to grasp.

“A lot of the discussion in synthetic biology is, ‘Oh, we can use it to save nature, we can engineer bacteria to clean up pollution,’” she says. “I wanted to design much bigger, much more visible organisms. If they’re bigger, then do we feel differently about them?”

Ginsberg’s critique of a world that increasingly relies on synthetic biology may seem like it belongs to a surreal, far-off future. Then again, so does growing a rose’s scent with yeast.