Form follows function – the central tenant of modern architecture – is an idea most often employed to justify cheap, ruthlessly efficient factories and office buildings. But for everyday living, it’s too rigid. A kitchen should be suitable for cooking, sure, but can’t the space also reflect the more complex, less rational things that happen within: family gatherings, romance, heartbreak? Does a clinical, all-white, ruthlessly organized space really suit?

Instead, maybe a messier update on modernism is needed – one that better relates to the human condition. Certain practicalities can stay – rectangular rooms are great for arranging furniture, flat walls are ideal for hanging art – but there should also be a place for delight and wonder, as well as the strange, irrational and unpredictable.

It’s not a new idea. The very architect who coined the form-and-function mantra in the late 19th-century, Louis Sullivan, used joyfully useless, totally frilly decoration on his early skyscraper experiments (his most famous buildings in Chicago look like a flower garden exploded on them). And since then, many designers – Frank Lloyd Wright, Frei Otto, Frank Gehry – have espoused different types of organicism. (Lloyd Wright, in fact, declared “organic architecture to be the modern ideal … if we are to see the whole of life, and to now serve the whole of life”).

Now, new technologies (3-D modelling software, 3-D printers, computer-guided routers) are making the aesthetic easier for architects and interior designers to integrate into our everyday lives – applying an amorphous quality to our homes and cities. And they are proving that when form and functionality collide, the result isn’t necessarily a stark, uninspired box.

Many advocates of the style also believe that organic shapes actually work better for efficiency.

Alexander Josephson is the co-founder of Partisans, a Toronto-based architecture practice. He describes himself as “form agnostic,” but says that, often times, the complex set of problems inherent in a 21st-century design brief – one that demands affordability and practicality as well as luxury, sustainability and craftsmanship – are best resolved by something organic. That’s because forms from nature – tree branches, shells, leaves – “tend to have an inherent efficiency to them. And they tend to be highly synergistic,” allowing many complex systems to work together “like a symphony.”

That might sound high-minded, but Josephson points out there is a practicality to it. “People often criticize organic architecture for being merely decorative,” he notes. But if the shape is simply an expression of the various systems making the architecture work, is that really decoration? 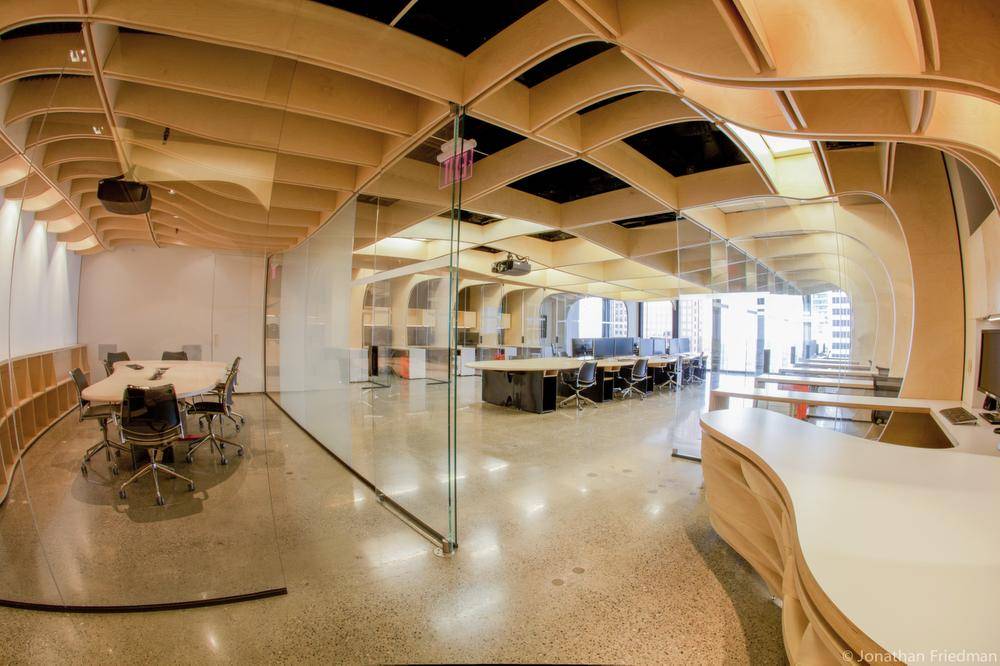 In Alexander Josephson’s remodelled office space for 25 investment bankers, the ceiling bows downward to create a sense of intimacy.

With computer modelling, he can study what shapes and forms work best to optimize various constraints. Maybe a structural system could be more effective and use less material if the beams were sinuous – not straight. And maybe that profile would allow for a curved ceiling that could improve acoustics and bounce more light around.

It works for space planning, too. He recently remodelled a 2,000-square-foot office for 25 investment bankers – not a lot of room for workers who would all likely prefer their own massive corner office. The model for the best layout – an open concept that gave everyone a view – looks somewhat like the inside of a peanut. The ceiling in the centre of the space bows downward “to create a sense of intimacy,” explains Josephson, “for the people sitting at the communal table in the middle of the room.”

Architects Tom Bessai and Maria Denegri, who both teach architecture at the University of Toronto and co-run their own private practice, are also exploring the synergistic possibilities of organic design. They use parametric design software and consult mathematicians and computer scientists to develop algorithms to generate unusual, though buildable forms. They have a workshop in their office basement with a laser cutter, 3-D printer and computer-assisted router where they can prototype all their creations.

The results are both startling and beautiful. For a home they designed near Ottawa, they created a sculptural staircase that looks like a giant Henry Moore nude made out of plywood. The shape was generated by cutting away as much of the underside as possible without compromising the structural integrity. Aesthetically, it acts as an exuberant counterpoint to what is otherwise a minimal, modernist house. And it has a fun, if not necessarily intended, use as a play space for the homeowners’ two young kids. 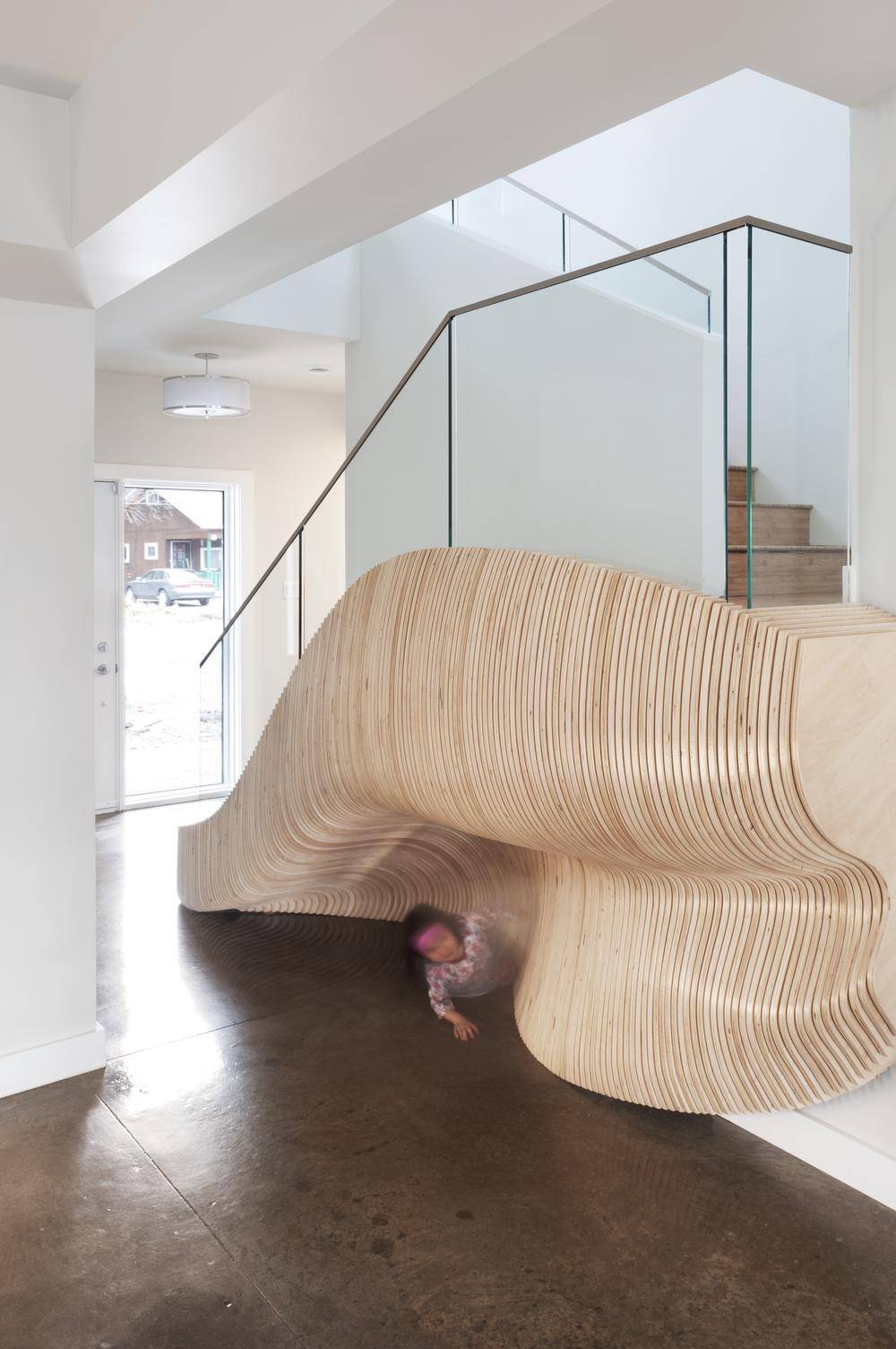 Bessai explains that his motivation for creating such shapes is in part to be innovative with the new technologies, but also to add a sense of wonder to whatever he creates. Otherwise our buildings – and by extension our cities – “can be quite dull,” he laments.

Even at an urban scale, organic shapes are starting to shake up the most staunchly modern form – the glass-and-steel high-rise. The twin Absolute Towers in Mississauga, for example, completed in 2012, were two of the first in Canada. They have invigorated an otherwise bland skyline with their sensual curves and swerves. They are being joined by two new developments in Toronto – a wave-fronted tower under construction now at the corner of Yonge and Bloor by Hariri Pontarini architects, and the new Gehry towers, which also have undulating facades. 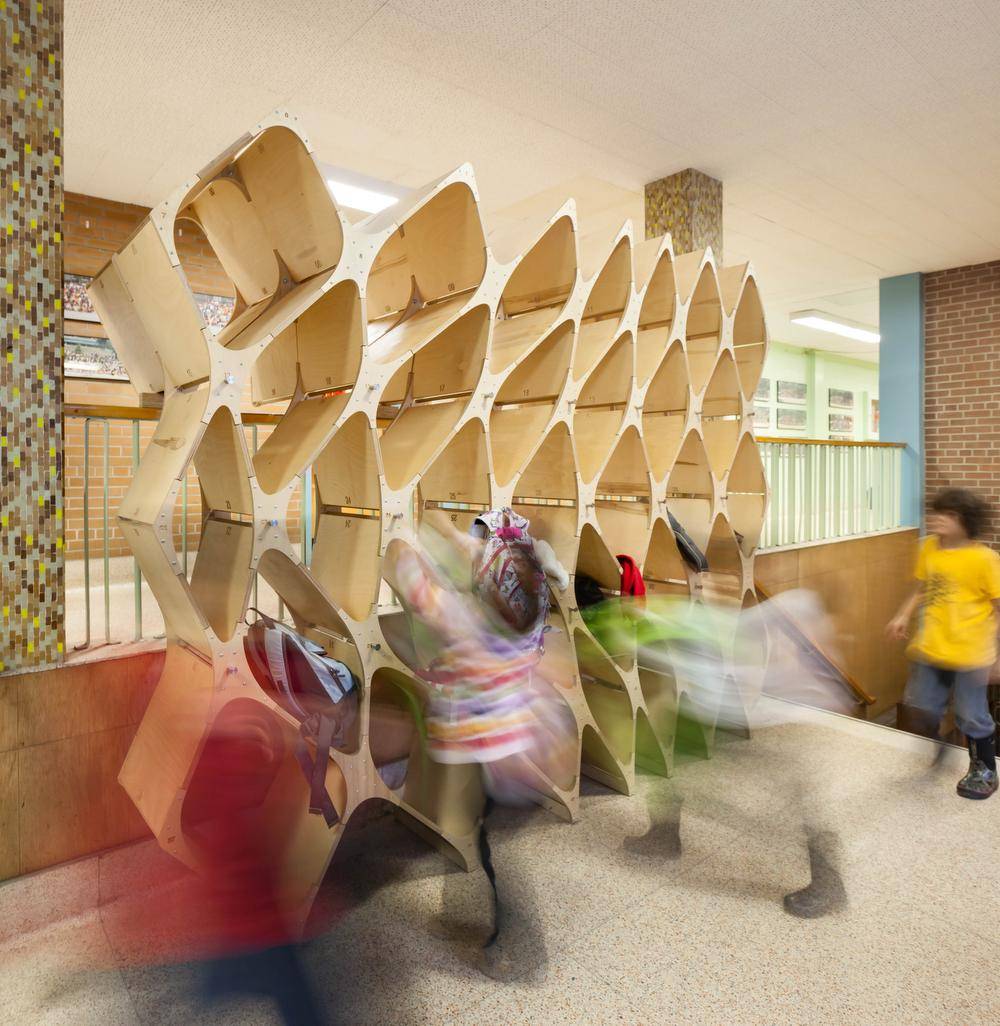 Another project in downtown Vancouver, designed by Dutch architect Bjarke Ingels, should be finished by 2018. The 52-storey tower twist and juts out dramatically from the base, a bit like a cobra facing a victim. The shape is part practical – fanning out over an existing bridge – part inspired. It’s hard not to look at the thing and think “wow,” which is not a response provoked by many other condos.

It’s possible that what these designers are doing is simply tapping into our innate, instinctive love of squiggly things. There’s scientific evidence to suggest that’s true. Merel Bekking, an Amsterdam-based design researcher, recently did MRI scans on the brains of 20 Dutch men and women to see what designs most excited the pleasure centre of the brain. In terms of shapes, closed-form organic objects triggered the most response. Possibly because those things most resemble the natural world around us, not to mention the amorphous shape of our own lives.