With apologies to T.S. Eliot, November – not April – is the cruellest month, at least for Canadian green thumbs.At this time of year, their gardens are well into their slumber, the cold weather has really and truly set in and the next bloom or shoot won’t appear for several months. To tide them over until spring, Globe Style offers a sampling from the new book The Gardener’s Garden. Published by Phaidon, the richly illustrated, 472-page guide to the grandest and lushest green spaces worldwide is ideal for flipping through on frosty winter days, providing plenty of horticultural eye candy (not to mention inspiration for the growing season to come). 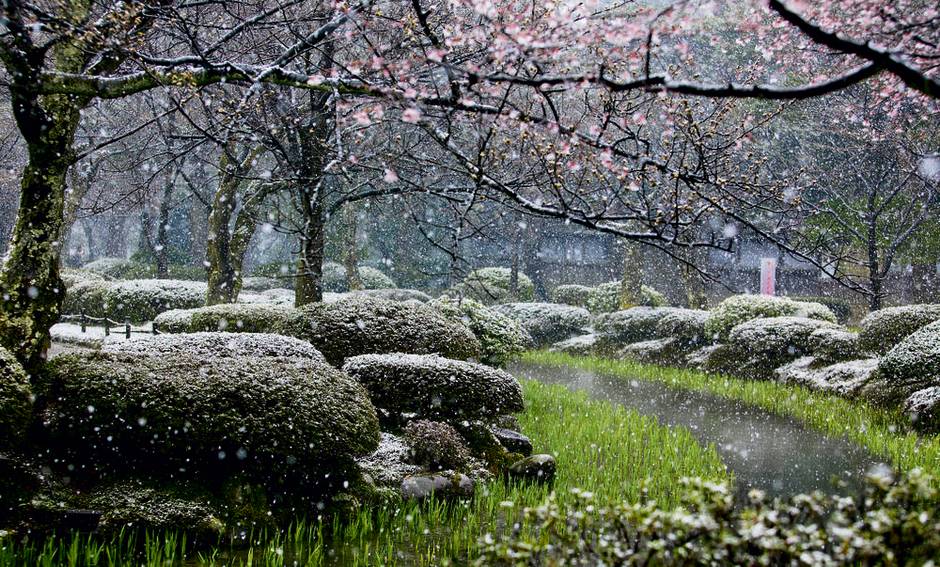 There are such things as winter gardens, as this meticulously landscaped, tree– and shrub-filled oasis in Japan’s Ishikawa Prefecture shows. Known as the Garden of the Six Sublimities, the Edo-Period construct is one 11 Japanese spaces profiled in The Gardener’s Garden (which sells for $89.95 through www.amazon.ca). In winter, the book states, “the garden is notable for its yukitsuri, a system of ropes attached to the top of the pine trees and tied to the lower branches to maintain their shape and protect them from damage by the weight of snow.” In the picture above, early pink cherry blossoms are showered by snowflakes during a spring dusting. The Garden of the Six Sublimities, known in Japanese as Kenroku-en, contains 40 species of cherry tree and more than 180 tree species in total. 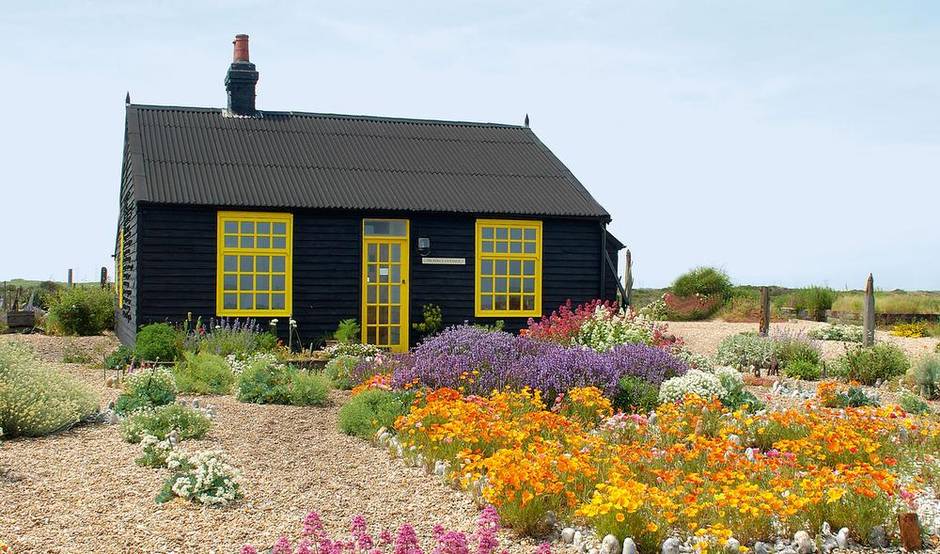 The garden at Prospect Cottage, the late filmmaker Derek Jarman’s retreat in southeast England, “is one of the smallest yet most magical” in the book. Created over eight years on a windswept headland, “it combines colourful plantings with rusted metal sculptures and arrangements of weathered driftwood and flint. Many of the plants are native to the unearthly landscape, so can tolerate the salt-laden winds, strong sunlight and low rainfall.” 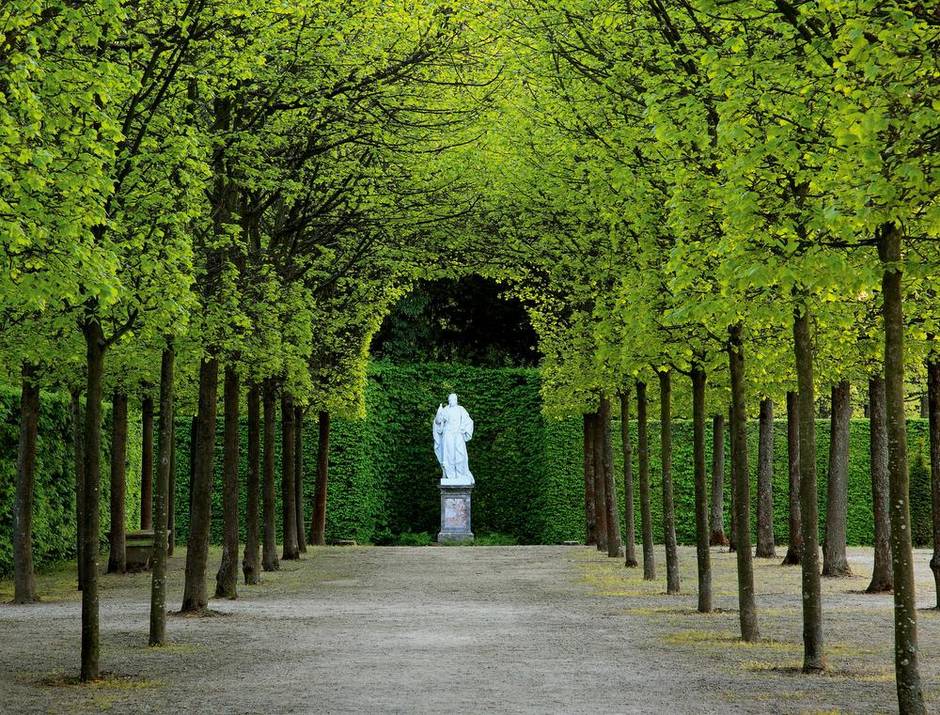 Restored in the 1990s, the expansive grounds surrounding Germany’s Schloss Schwetzingen, an 18th-century palace that once housed the rulers of the Palatinate, offers “an enjoyable lesson in garden history” that covers both the Baroque and Rococo styles and the reaction against them, the latter “in the shape of the English garden around the formal core.” That formal side is illustrated in the allée pictured here: Comprised of pleached lime trees, it culminates in a classical statue framed as if it were standing at the end of an arched hall. 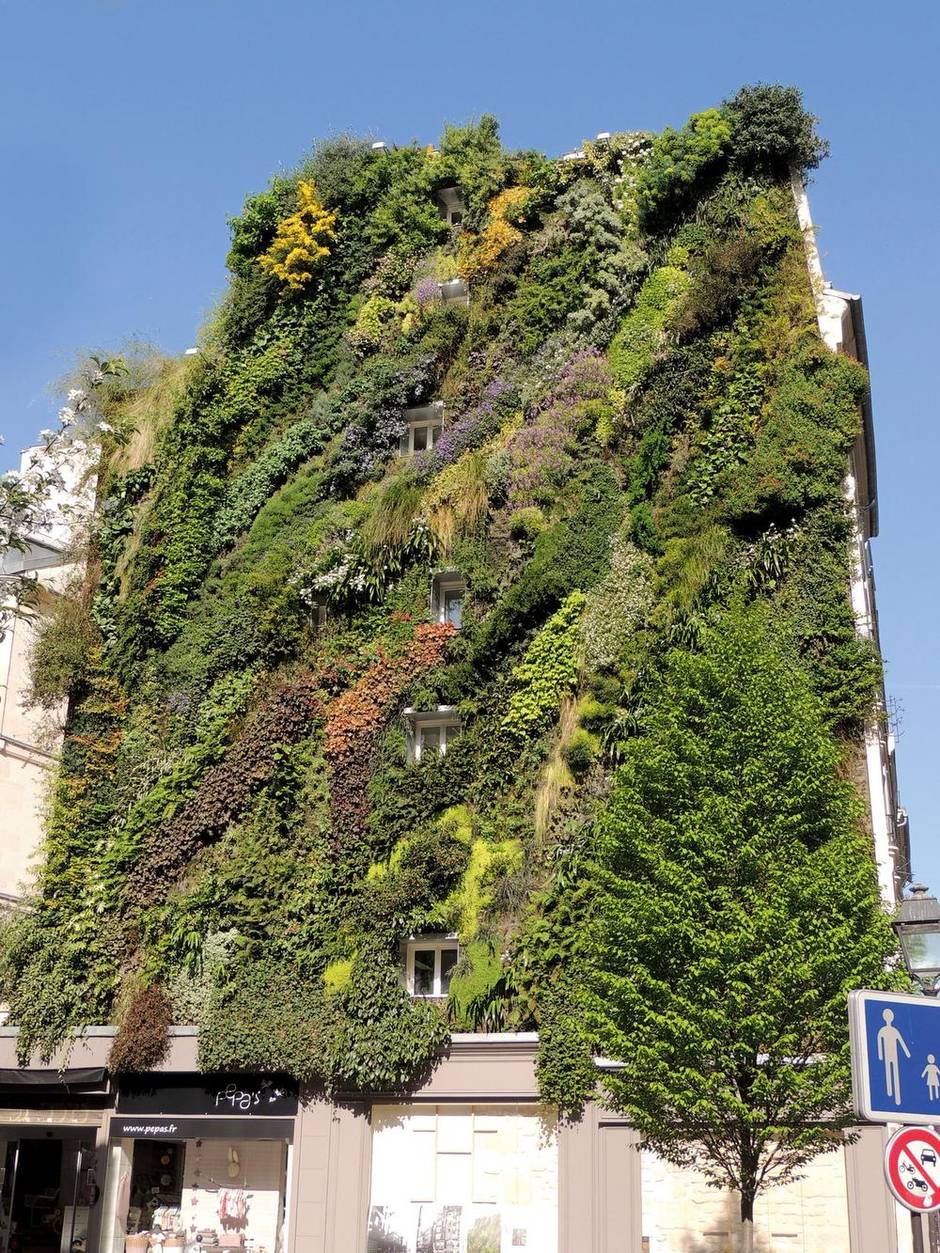 “What kind of garden is opened to coincide with Design Week in Paris, one of Europe’s most fashionable cities? The answer is a stylish one – L’Oasis d’Aboukir, one of French botanist Patrick Blanc’s renowned murs végétaux (vertical gardens).” Installed on a south-facing wall at an intersection in the capital’s second arrondissement last year, L’Oasis d’Aboukir consists of about 7,600 plants drawn from 237 species. Among them are a host of flowering evergreens so that it doesn’t look bare in winter. 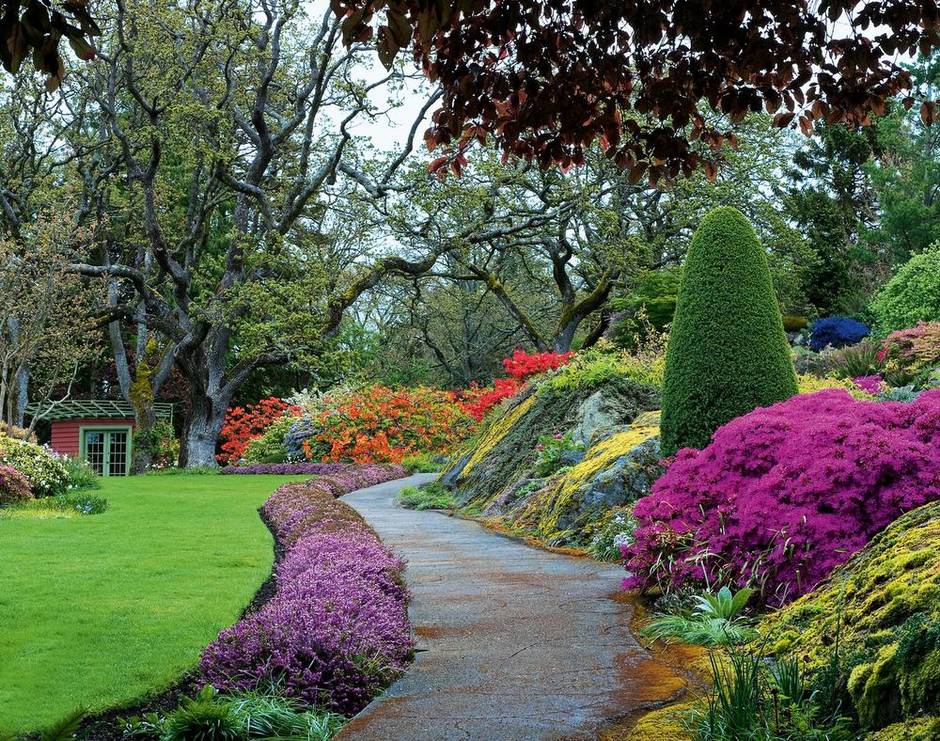 One of the six Canuck spaces showcased in the book, Abkhazi Garden in Victoria was a labour of love for its creator, Peggy Pemberton-Carter, who bought the site in 1946 and the next year married an exiled Georgian prince, Nicholas Abkhazi, she had first met in the twenties. Together, they worked on the garden, with the help of architect John Wade, for the next 40 years, filling it with ferns, hostas, mature rhododendrons and swathes of woodland flowers. Paths play a key role in the design, ensuring that it’s experienced like the unfurling of a Chinese scroll.