It's a great spring to be a gardener - the soil is warm and dry in a welcome about-face from the sogginess that plagued much of the country last year.

And as the weekend for hoeing, sowing and seeding begins, many more people are putting in their peppers and tomatoes in hopes of reaping the returns of culinary treasures and the satisfaction that comes from growing life from a seed.

There have been massive shifts in the way people think about gardening, says Toronto garden writer Gayla Trail. They are stepping away from grandma's rows of flowers and preferring to grow fruits and vegetables.

It's become a recreational and community-building activity, too, she says, as opposed to being simply a way to have a few fresh carrots handy.

"Up until recently golf and gardening used to be more middle-aged activities and that's changing," she says. "Recreationally, it's great for you. We want to get outside more, get away from our computers more, we want a certain quality of life."

Retailers are recognizing this explosion of enthusiasm for gardening and are pushing this year's trends - organic seeds and sought-after heirloom varieties. They also see the beautiful weather forecasts and are eager to respond to customers' push for local food that has proliferated over the past five years.

"People love the idea of growing their own food and being able to feed their neighbours," she says. "It's like having a million little babies and watching them grow. All you have to do is weed out the bad ones."

She planted some of her vegetables a little bit earlier this year thanks to the warm weather. "I'm so glad I did it because it spreads the work over a longer period, though I was really lucky not to have my carrots frozen."

Brian Minter, president of Minter Gardens in Rosedale, B.C., near Vancouver, says he's had many very eager customers trying to get their gardens in early. Temperatures were unseasonably warm in February, which was "not good for the Olympics, but good for gardeners," he says.

The eagerness for fresh local produce is clear. Vancouver-region vegetable growers, for example, have sold out of tomatoes, he says. "It's like 'Excuse me, isn't this the weekend tomato planting begins?' It's because [the public]will not wait. Their time clock says we're putting tomatoes in now."

Though growers are currently enduring a cold snap right now, he's optimistic for the season ahead. "It's going to be a phenomenal year, if you have the right products and the right people," he says.

Environment Canada has projected that the entire nation, save for a few small corners, will see higher than average temperatures this summer.

Gardeners are not solely focused on vegetable gardens any more, Mr. Minter says - it's all about 'food gardening,' a world-wide shift noted by the National Gardening Bureau in the United States last spring.

The horticultural body also noted that 55 per cent of gardening is done in containers, a figure that substantiates the trend toward urban gardening.

"People who are brand new to gardening are immediately jumping to food," says Ms. Trail, adding that the sale of vegetable seeds has surpassed the sale of flower seeds.

Mr. Minter has also seen a change in what his customers want. There's a wild demand, especially among younger patrons, for the unique vegetables that have become the darlings of gourmet food TV, he says. The hottest tomato this year, for example, is the Peruvian tomaccio, which you can put in the microwave to make sumptuous sun-dried tomatoes (though he says many of his customer base still wants to plant the traditional beefsteak tomatoes).

A diverse food garden can be as pretty as a flower patch, too, Ms. Trail adds, which draws people to veggies over flowers.

"Some of the vegetables are so beautiful, they can be ornamental in their own right," she says.

The corporate world is also answering - if not fuelling - the garden fever.

This spring, major retailers are enjoying a surge in sales of seeds, often of the organic variety. Home Depot Canada has been "blown away" by the response to its new Martha Stewart line of organic vegetable and herb seeds, says Frank Turco, a senior manager at the chain. "They are doing exceptionally well. The trend in organics is unbelievable this year."

The shift comes as prices for organic seeds have dropped over the past couple of years to levels at which they are comparable to mainstream lines, he says. A packet of Martha Stewart seeds costs $2.99, for example.

The flight to organics is spurred by cities' ban on pesticides which has heightened awareness of natural alternatives. And the recession is a factor in consumers' rising interest in vegetable and herb gardening, says Michael Magennis, associate vice-president of gardening at Canadian Tire Corp. People have more time - and less money - after having lost their jobs; or they're being frugal by doing "staycations" in their back yards.

One of the season's big hits in the garden is the "topsy turvy" tomato, he says. Hung upside down from a hook or a branch, the planter takes up little room and is not prone to be raided by squirrels or raccoons. Grocer Loblaw Cos. Ltd. can barely keep up with demand for its President's Choice upside-down vegetable planters, at about $15 a pop, says Peter Cantley, vice-president of gardening. "In some locations it's selling out."

But consumers are divided between those who prefer do-it-yourself seeds and others who buy do-it-for-me already-planted pots of vegetables or herbs, he says. Planted fruits are also beginning to take off, including one-gallon pots of blueberries and raspberries for $8 each. But seed sales are outpacing the growth in gardening products overall, he says. 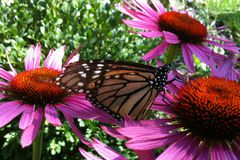 Meet four budding gardeners from across the country
May 1, 2018 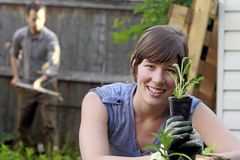