Brown is the new green, they are saying in Vancouver this hot, dry summer. Typically rain-soaked and lush, the grass here has turned brittle and a certain golden-brownish. Rain last weekend did not do much for the toasted state of the city’s parks, yards and boulevards.

So then what’s this? A yard in deep green, perfectly manicured, without a hint of rain-deprived ruin, sandwiched between so much parched crispiness fronting both of the houses next-door. “I am delighted with it,” says Arthur Bensler, the lawn’s owner.

But this surprising, verdant patch of lawn in Vancouver’s Point Grey neighbourhood is not grass at all, but synthetic. Artificial grass is becoming a real alternative for people interested in high curb appeal and low maintenance. A world away from the carpet-like AstroTurf of decades ago, today’s synthetic grass looks a lot like a uniform, impeccable (some say too perfect) version of the real thing. (And in a barefoot test on one high-end lawn, felt not too different either.) After years of being banished to patios, pool decks and putting greens (still a huge growth area), synthetic turf is sprouting up in yards all over the place.

“Interest [has] grown double over last year,” says Shaun Hunt, owner of Precision Greens and Bella Turf – artificial grass installation and distribution companies respectively. “Our spring was insane. … Nobody wants to put real grass in because they can’t water it.” 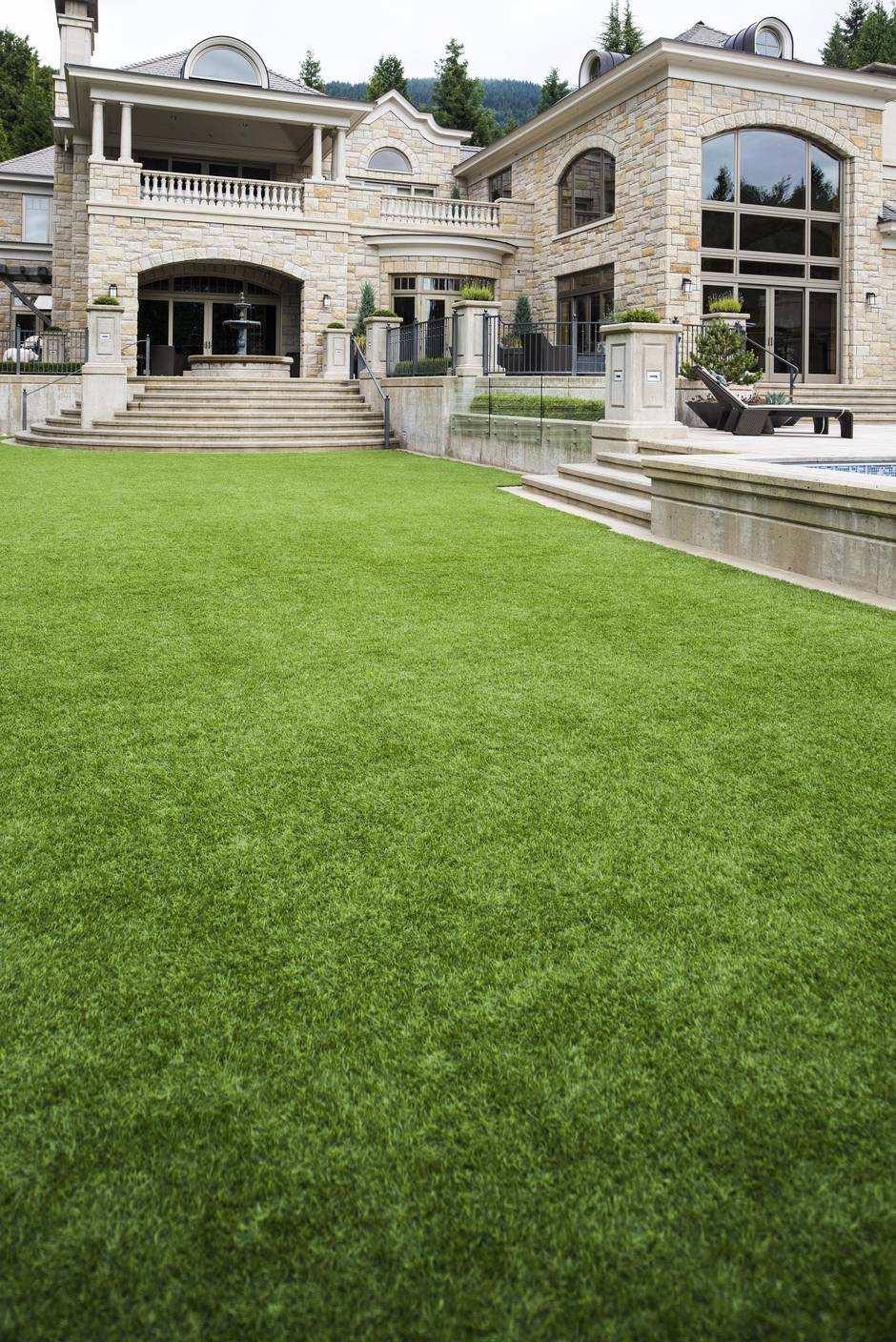 Some homeowners in West Vancouver are turning to artificial lawns as a result of problems with maintenance, water restrictions, and the chafer beetle. (Jimmy Jeong for The Globe and Mail)

In drought-like conditions, Metro Vancouver moved to Stage 3 of its watering restrictions last week, meaning watering any lawn is not permitted; even exemptions for new lawns have been cancelled. (Flower or vegetable gardens can be watered only by hand.) The City of Vancouver is urging people to report violations, and bylaw officers have been dispatched to write tickets to any wrongheaded sods who persist in their watering ways. (The term “grassholes” was coined by some clever person to describe such people.)

So the grass is always greener – this summer, anyway – when it is not real, at least in the Lower Mainland. People desperate for an attractive lawn have done everything from hiring someone to paint it green to replacing it with artificial grass. Hunt’s company is training installers of real grass to work with the artificial stuff because work is drying up with the watering restrictions.

Another significant factor in the artificial-grass spike has been the infestation of chafer beetles, which have been tearing up lawns and tearing through sales records at SynLawn, the company that did Bensler’s lawn.

“We’ve had 100 per cent sales increase two years in a row,” SynLawn owner Chris Berry says, adding that 80 per cent of the work is back and front yards – and 70 per cent is done for pet owners. Urine can be a killer for real grass. The artificial turf installation may include a natural product that kills the ammonia smell. Rain will wash it away, but owners may have to hose it down.

The tremendous growth of the industry is not simply a West Coast phenomenon. In April, a Toronto Public Health report found that the city’s public and Catholic school boards have installed artificial turf on 22 school properties and plan to install it on 19 more. 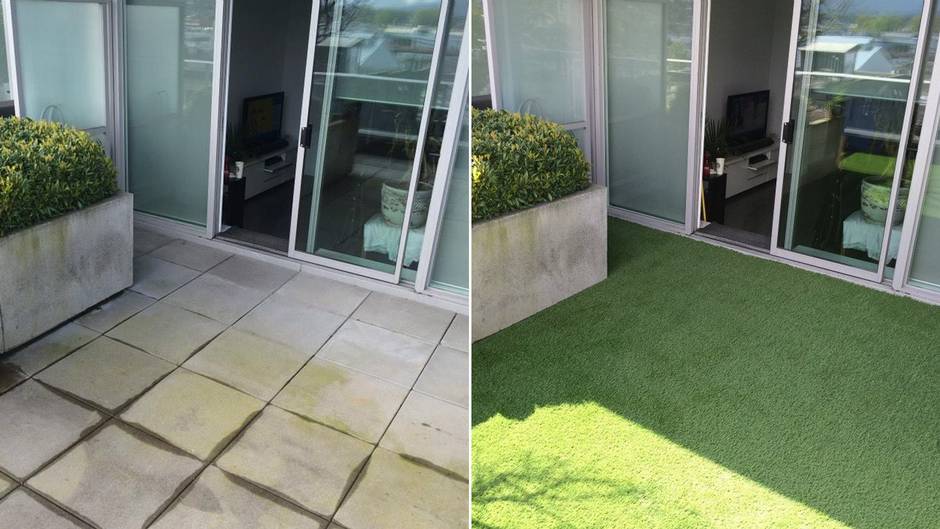 Artificial turf can include a product that kills the ammonia smell in animal urine. Rain will usually wash the urine away, but owners may have to hose it down.

SynLawn’s Eastern Canadian sales manager, Larry Roy, says the company has sold the stuff for homes, playgrounds, splash pads and daycare centres. Other recent jobs include a highway roundabout in Windsor, Ont., a dog run at the Ottawa Humane Society and an indoor golf facility in Charlottetown.

But the real explosion is in the residential market. Synthetic turf is being installed on everything from postage-stamp lawns to extravagant properties such as the West Vancouver compound where Precision Greens laid down 12,000 square feet of it, in addition to creating two putting greens, a full-sized bocce court and a one-third-sized private soccer/football field (with scoreboard, lighting, seating and even video cameras to capture the action), built over an underground garage on what was originally an adjacent property. The compound, nestled between two mountain creeks, also features a great deal of real nature – old trees and a lot of new landscaping. “It looks perfect all the time,” Hunt says during a tour of the property, which also features a pool, two hot tubs, outdoor television screens, fire pits and two outdoor kitchens. “You can do anything to it and you won’t wreck it.”

So if it rains before a garden party, for example, guests will not get mud on their fancy shoes or gowns. The owner is so happy with the stuff that he had it installed at two adjacent properties he recently bought.

At an oceanfront residence not far away, also in West Vancouver, you will find a synthetic putting green built on land jutting out over the water. Another nearby home is landscaped with artificial grass and (real) palm trees.

For such high-end places, the look is the key issue, Hunt says. But for more everyday homeowners, he says, it is about the maintenance.

Bensler, who built his airy contemporary house a couple of years ago, says the chafer beetle has been causing problems on his street, and his front lawn, which faces north, was not doing well – in addition to being a lot of work. “You need to top-seed it, fertilize it, plug it, water it, the list goes on and on. And then you look at your lawn at the end of the winter and it’s a bunch of weeds and looks terrible.” The California drought clinched it for Bensler, who spent about $19,000 this spring to put artificial grass on his front and back yards. 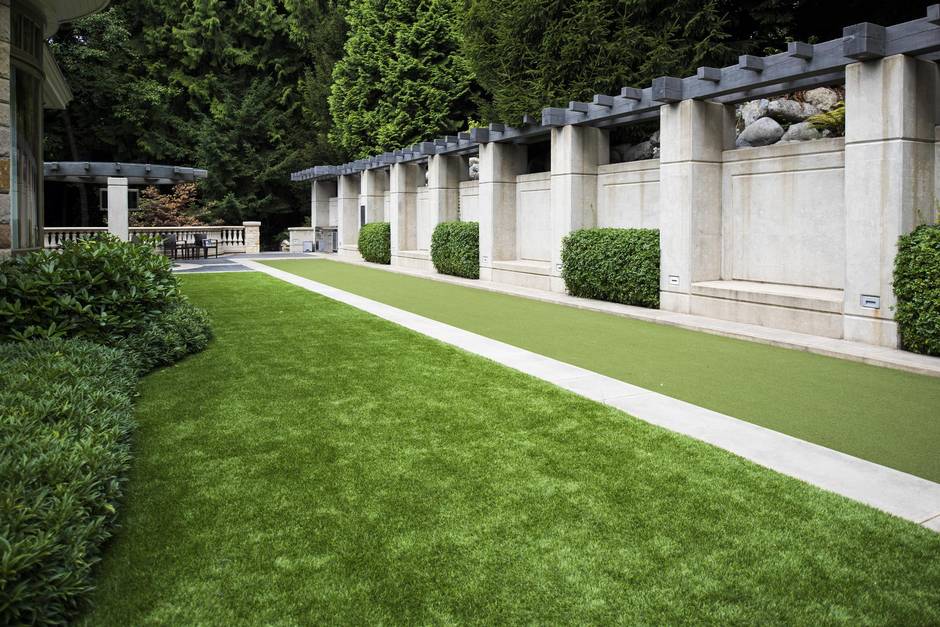 . Synthetic turf is being installed on everything from postage-stamp lawns to extravagant properties. (Jimmy Jeong for The Globe and Mail)

In White Rock, meanwhile, homeowner Sande Marples says the carpet-like uniform green of her new artificial lawn, which cost her about $6,000, is a huge improvement over the mucky, mossy stuff that until last April formed the backyard of her suburban home.

“All my friends think it looks great. Nobody would know that it’s not real unless I tell them or they walk on it.”

Her Yorkshire terrier happily pees on it without tracking mud into the house, Marples can pad around on the clean turf barefoot without her feet getting dirty (it took her a little while to get used to the slightly crunchy texture), the raccoons and crows do not come around any more – and she likes it that way.

Not everyone does. Susan Herrington, a professor of architecture and landscape architecture at the University of British Columbia, has concerns.

“Something living is different than a piece of plastic,” she says, adding that synthetic lawns do not contribute to habitat value. “Animals can’t eat it, things can’t live in it that would normally live in the grass environment.”

Herrington also points to reports that have raised questions about its safety for sports.

The concern is the crumb rubber – pellets made from recycled material – that is used on artificial playing fields to emulate sand, holding the turf up and adding some cushion for cleats. (The rubber should not be used in residential landscaping, both Berry and Hunt stress.) In the United States, the Synthetic Turf Council says more than 60 technical studies and reports say no research directly links crumb rubber exposure to cancer.

The Toronto Public Health report on artificial playing fields that use the rubber concluded that, based on available evidence, “third-generation artificial turf is not expected to result in exposure to toxic substances at levels that pose a significant risk to human health.” But it also pointed out that artificial turf lacks the biodegrading properties of natural surfaces, and raised concerns about increased surface and air temperatures around the fields. And it said hazardous substances from the crumb rubber can leach into surface or ground water, although the releases are below levels of concern to human health. 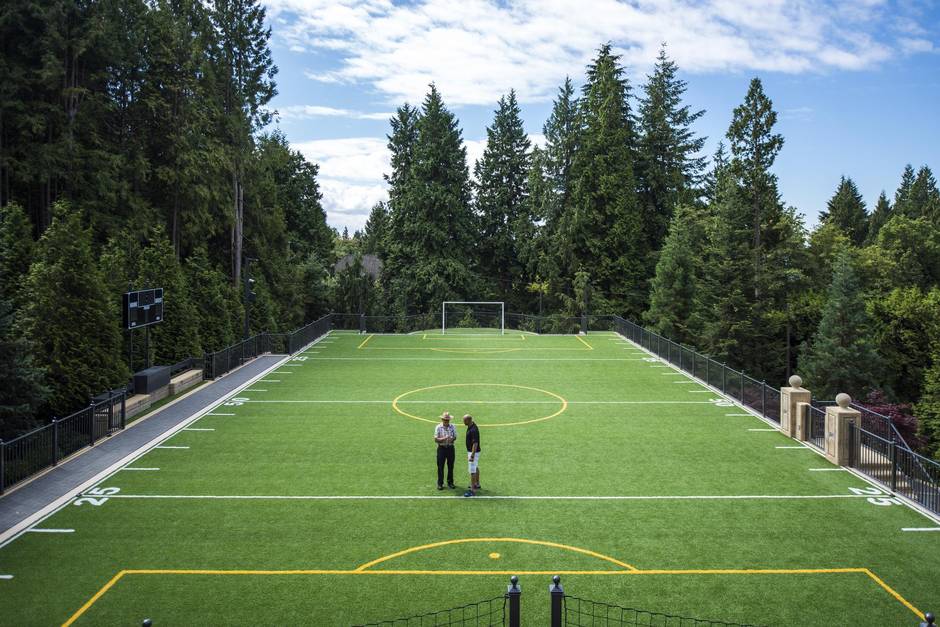 Turf is seeing huge growth, in properties large and small. (Jimmy Jeong for The Globe and Mail)

At Simon Fraser University, Health Sciences professor Bruce Lanphear worries about chemicals in the material. “When we say, for example, that there’s no evidence that these things are harmful or that the levels of toxins that children are exposed to when they play on them are harmful, therefore they’re safe. That doesn’t mean they’re safe.”

Lanphear, who specializes in the effects of toxins on children and the developing brain, adds: “If it was me and I had children, I wouldn’t put these things in my yard.”

Hunt says independent tests found his materials to be safe. He also points to an added benefit – fewer mosquitoes.

Herrington adds that the offer of a free artificial surface for her child’s Vancouver high school was accepted by the parent advisory council, but rejected by the students. “It’s not a very nice surface to fall on,” she says.

There was much controversy (and even a lawsuit) over FIFA’s decision to use artificial turf at the 2015 Women’s World Cup in Vancouver this summer even though men’s events are on real grass.

But beyond any safety concerns, some do not find the aesthetics appealing.

“It’s got this uniform colour and cut that you don’t really see in grass,” says Herrington. “Some people might like that. It looks fake to me.”

In Ottawa, Roy defends his turf, citing, among other grounds, the support of his wife.

“I am married to a holistic nutritionist; she’s a tree hugger,” he says. “And let me tell you, if I couldn’t sell the concept of synthetic grass to my wife, I wouldn’t be in this industry.”