Skip to main content
SYDNEY LONEY
Special to The Globe and Mail
Published May 25, 2016 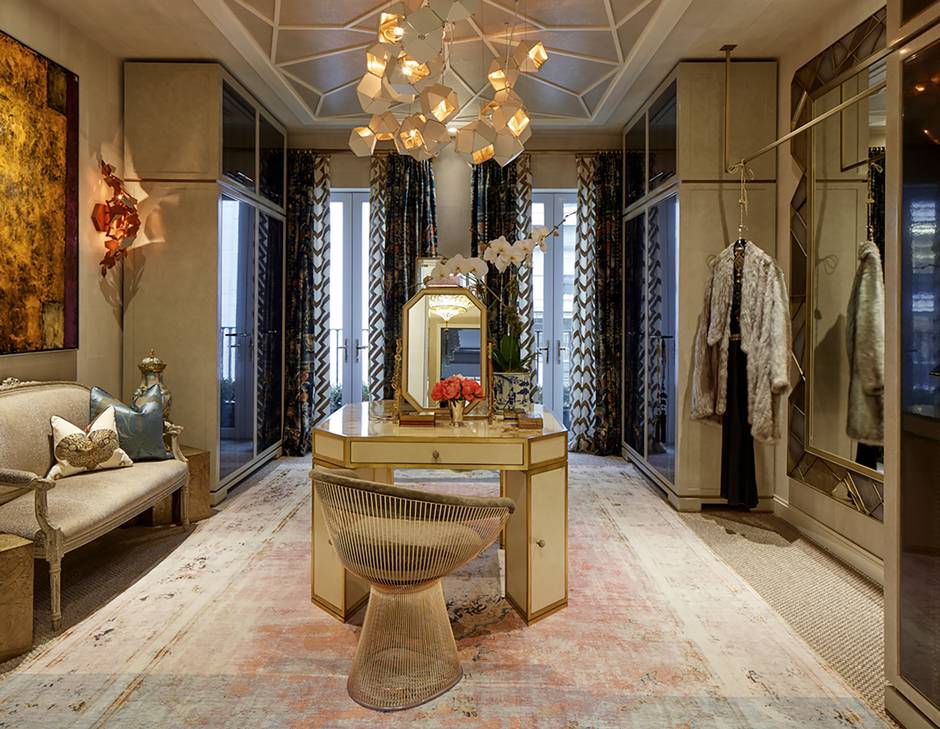 Whether they have 1,000 square feet to work with or only 150, Canadians are increasingly making dressing rooms a design priority. From spare bedrooms in large residential homes to second bathrooms in cramped condo units, people are even whittling away at their livable space – or forfeiting it altogether – to make way for private sanctuaries.

“The dressing room is a luxury once reserved for a small percentage of the population,” Martine Ast, senior designer at Paul Lavoie Interior Design in Calgary, says. “But it’s on a lot of wish lists lately.” These rooms provide a retreat from busy lives and a place where people can focus on the beautiful things they’ve collected or purchased, she says. “They’re a reflection of hard work and effort, they’re a reward.” Part of the appeal, Ast says, is that people can personalize a dressing room in a way they can’t a kitchen, or even a bedroom. “They don’t need to consider other people’s requirements. It’s like, ‘This is my room and I don’t have to share it with anyone else.’ ”

That said, when philanthropist Sophie Desmarais entertains in her lavish Montreal home, the first thing she does is show guests her dressing room. “I love it – in fact, I’m in it right now. It’s not a large space, but I share it with my friends and my dogs. My husband is allowed to come in, but not to stay – he has a dressing room of his own.”

Desmarais says a dressing room is important because it’s the only room that’s really yours. “You can shut yourself off and put your thoughts together. If the size allows, there should be a comfortable chair where you can sit and reflect.”

Desmarais’s dressing room was designed by Richard Ouellette and Maxime Vandal of Les Ensembliers in Montreal and Toronto. They’ve done almost 20 in the last few years, including one over-the-top space currently on display at the Kips Bay Decorator Show House in Manhattan. 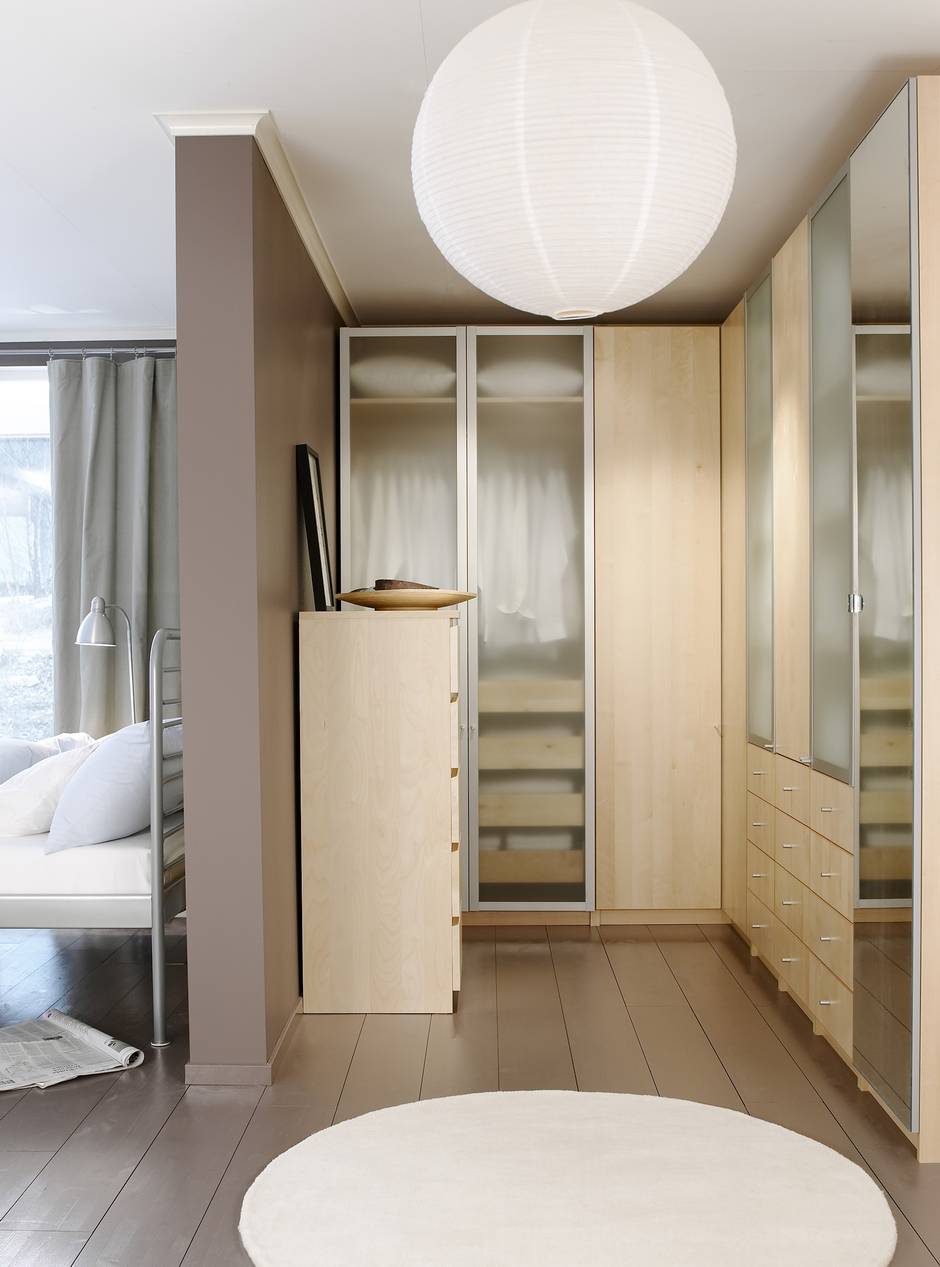 In Desmarais’s dressing room, oak cabinets are adorned with horn and brass hardware designed to look like jewellery, while glass-facing drawers and open shelves mean her clothing and accessories become as much a part of the decor as her pillows and Buddha statues. “It’s a room, not a storage space,” Ouellette says.

The dressing room is a fantasy room, Vandal adds. “It’s about texture and touching things, of creating a feeling of being enclosed, as though you’re inside a jewellery box. It’s the most personal space because it’s all about you.” Vandal says the trend is partly tied to today’s “ego movement” and the way people are showcasing themselves on social-media sites such as Instagram. “The dressing room is just another element of this new-found sense of theatre.”

The trend is being advanced by such sites as Houzz and Pinterest, which show everyday homeowners what’s possible. “The idea has trickled down and more people are thinking, ‘Maybe I could have this too,’ ” Vancouver designer Patricia Gray says. “In the past it was spa bathrooms, now it’s dressing rooms.”

She just transformed a storage room into a luxurious dressing room for a single mother in a one-bedroom condo in Yaletown. “We had to maximize every square inch – the hallway leading into the room became an extension of the space.” Pretty wallpaper, framed mirrors and a chandelier added the requisite glamour. The trick, Gray says, is to do a proper inventory. When designing a kitchen, you count the cutlery to plan for storage. In a dressing room, you count shoes and purses. And, rather than tucking them away, these possessions are put on a pedestal.

Ast recently created a dressing room in Calgary to showcase the occupant’s designer shoes and purses – there wasn’t even space for clothing, aside from a single gown draped over a bust. “I felt like I was setting up a Parisian boutique.” Close to 75 handbags and 100 pairs of shoes all became pieces of art. “Fashion is important to people again, and they need a proper place to display and store their treasures.” 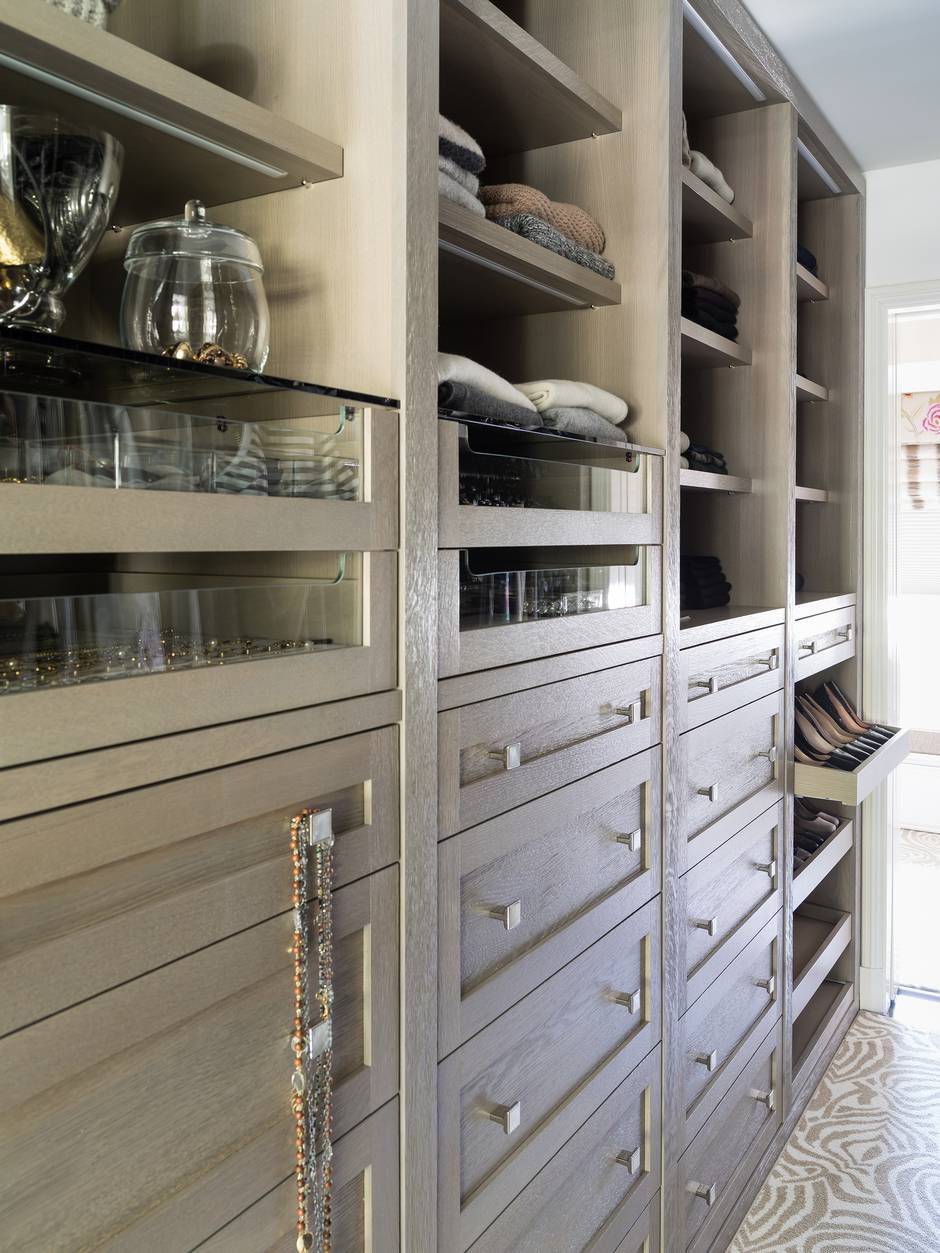 When it comes to general storage, the conventional closet with a shelf and rod just doesn’t cut it, says Cynthia Hyde, co-owner of Simplespace, a custom-closet manufacturer in Montreal. “We’re seeing a trend toward form rather than just function.” Elegant jewellery trays, lighted rods activated by motion sensors and islands that serve as both decorative and functional focal points are increasingly popular. Hyde says empty-nesters are staying in their homes instead of downsizing and are converting bedrooms into dressing rooms, while first-time home buyers are beginning to view dressing rooms as a necessity rather than a luxury.

“People not only want their dressing rooms to be organized and practical, they need to provide an experience,” Lucy Fréchette, a spokeswoman for IKEA Canada, says. As a result, the company is offering more flexible – rather than fitted – furniture, soft furnishings and elaborate lighting as the walk-in closet of old morphs into an actual living space.

Even decorative finishes, such as chrome detailing on slanted shoe shelves, are elevating the status of conventional storage, says Bob Fraser, owner of Closets by Design in Virgil, Ont. As he sees it, some of it can be chalked up to social media, some of it to popular culture (“Everybody still wants Carrie Bradshaw’s shoe closet from Sex and the City”), and some of it is just the need to create order in an increasingly hectic world. “Whether it’s a closet or a dressing room, it’s about organization,” Fraser says. “When something’s out of place, it affects other areas of your life.” 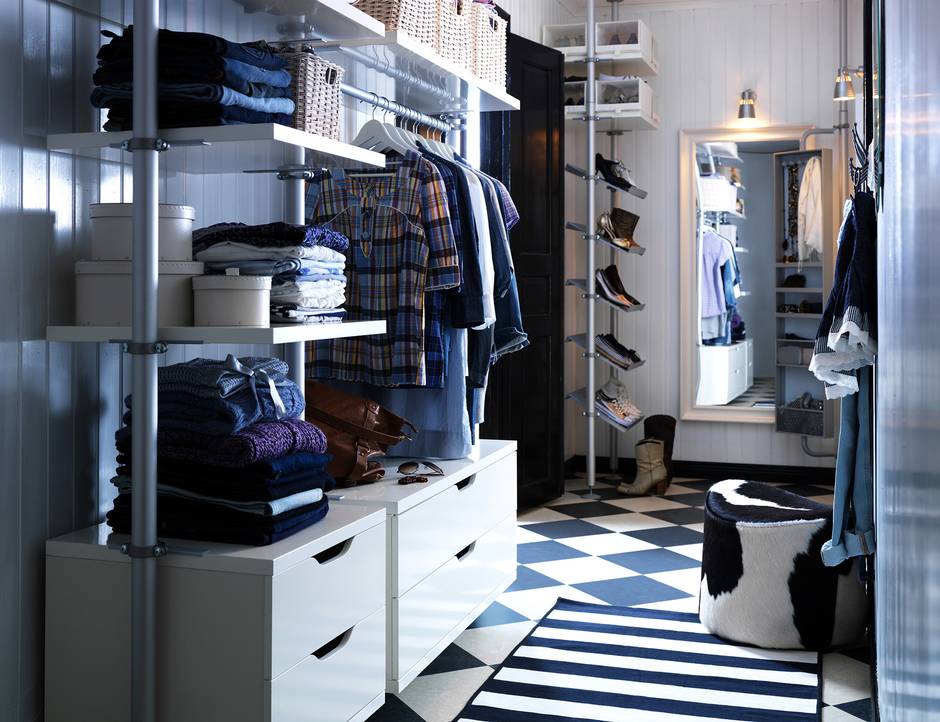 Both men and women are seeking a quiet space for themselves and their stuff. (Sandra Werud)

Women aren’t the only ones seeking a quiet space for themselves and their stuff. For every woman who orders a glass display case for her wedding dress, there’s a man looking for a glass-topped island for his watch collection. Tanja Hinder of Marrimor Design Studio in Vancouver says the dressing-room dream is evenly split between men and women. One male client requested an automated belt and tie rack, another a TV that lowered from the ceiling so he could watch the news while getting ready for work. “Guys are also all about hooks,” Hinder says.

People are increasingly asking for vanities, pedestals for tailoring, daybeds, poufs, art, small sculptures and UV-controlled windows (“The last thing I’d want to hear is ‘my Gucci shoes are all faded!’ ”). One of Hinder’s clients wanted a bar fridge so she could have chilled prosecco in her dressing room. Sometimes, the hardest part is building in space for actual clothing. “Occasionally, I have to tell my clients to purge,” she says. 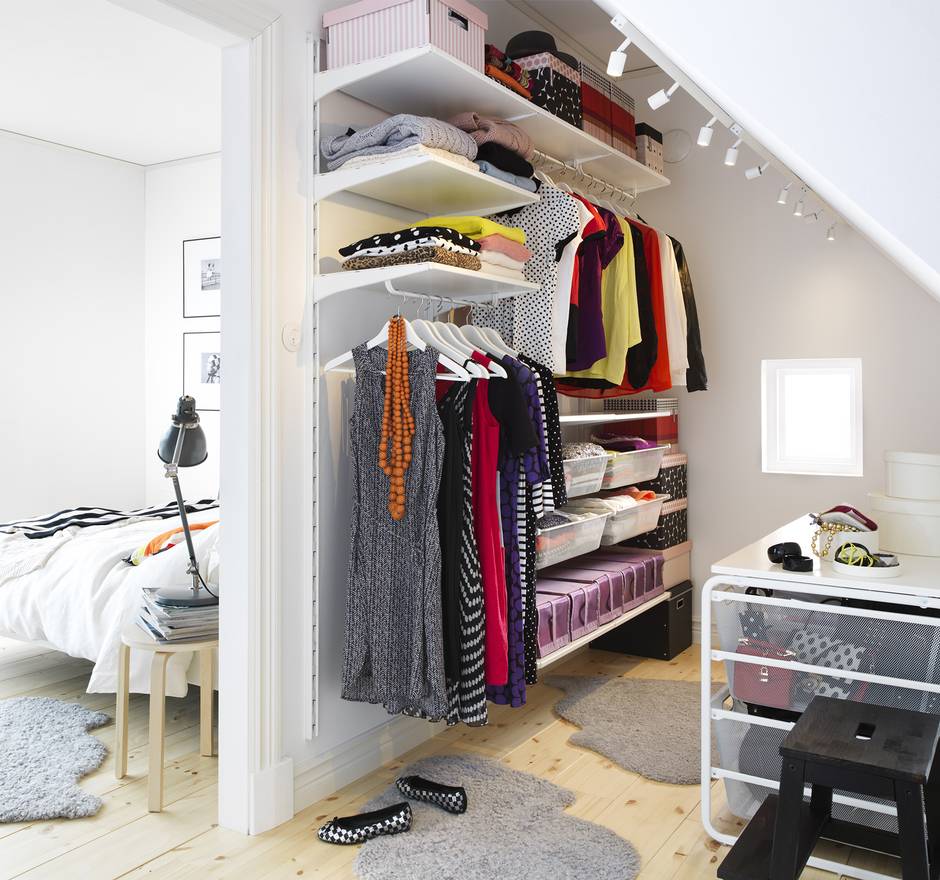 Dressing rooms are appearing in all types of spaces, from condos to residential homes.

Hinder’s customers tell her that their bedrooms are just for sleeping; their dressing rooms are the rooms they actually use. “They’re a place where people spend time. It’s not just run in, grab your clothes and get out. They make getting dressed more of a ritual.”

Andrea Wilde, a writer in Montreal, had never had a dressing room until she and her husband converted a loft in the city’s Redpath sugar refinery two years ago. A dressing room was a key component of the renovation. “We have a library, too, which is probably a more erudite place to be, but I feel glamorous in my dressing room,” Wilde says. When she’s getting ready to go out for dinner or a special event, being in her dressing room adds to the anticipation of the evening. “It’s the excitement of bringing an outfit together, of sitting at my vanity and doing my makeup,” she says. “It’s party time – and the party starts in the dressing room.”