I love technology, but I don't want it to overrun my home. I'm three-quarters of my way through a master's degree specifically focused on the management of technology and innovation. I marvel at a future of self-driving cars, computers that diagnose and treat disease and 3-D printed everything.

But, at the end of the day, when I close my door behind me, after using an analog, non-digital key to get in, I'm happy to live in what I call a stupid home. I don't own an Amazon Echo – and I don't want one (I'm busy, but still more than capable of turning on my own sound system and ordering my own laundry detergent). And my walls are free of iPads or touch panels controlling the lighting, thermostat or anything else. I don't even own a television.

My aversion has less to do with fears of identity theft (though that would be valid: AT&T's 2016 Cybersecurity Insights Report discovered that only 10 per cent of companies producing Internet-enabled devices were confident their security measures could prevent hacking). It has more to do with the gnawing feeling that technology is overrunning my life. Sometimes, my phone feels like an extension of my arm and I worry about the number of times I compulsively check my e-mail every day (let alone every hour).

It turns out, I'm on to something. Carving out space at home where technology doesn't infiltrate can be healthy: reducing stress, improving sleep – even resulting in better and more frequent sex.

According to Adam Alter, a psychology professor and an associate professor of marketing at NYU's Stern School of Business, we're living in a time of technological addiction – something he explores in his new book Irresistible: The Rise of Addictive Technology and the Business of Keeping Us Hooked. Although Alter says that technology's transformative potential is "miraculous," our relentless attachment to our devices, with some people spending up to three hours a day on their smartphones alone, is resulting in a slew of unfortunate side effects. For example, while our devices promise to connect us, they paradoxically make us feel lonelier and more alienated from our peers.

To counter the negative effects, Alter advocates that people create "a screen-free space" in their homes by locking "phones and other screens in a drawer in a room far away from where they are for a few hours a day." He explains, "there's an old idea in psychology known as propinquity – the idea that things have a bigger effect on your experience of the world the nearer they are. It's very hard to develop an addiction to something you can't see or reach, so the best thing you can do is spend time away from tech – and spend time in a room that is as near to screen- and tech-free as possible."

Going tech-free, even in a single room, is an idea echoed by author Joshua Becker, who runs a blog about the benefits of simplifying your life: Becoming Minimalist. To Becker, creating a meditative, contemplative, screen-free boudoir results in better self-reflection (and therefore growth as a person), more knowledge (it increases reading) and better sex. "Couples who keep a TV in the bedroom have sex half as often as those who don't," he wrote on one blog post, referring to an Italian study. "And spouses who choose to interact with one another on an emotional level have better, more fulfilling sex."

Becker's one exception is that "I currently use my cellphone as an alarm clock," he wrote in an e-mail. "It's tempting to use all of its capabilities, but I work hard to limit its use in the bedroom and near bedtime as part of my routine.

Author William Powers also believes in having firm boundaries when it comes to technology. After spending 10 years working 80 hours a week in development aid, he was burnt out. Part of the issue was the pressure he felt to always be connected. "We are just tethered to the technology to the point where 75 per cent of Americans check phones under the table at dinner," he says. To counter the burnout, he not only slashed his working hours, but, with his wife, implemented weekly "sabbaticals" from technology. "Starting Saturday afternoon and all day Sunday, we don't check our devices," he explains. "We shut them off and remove the batteries."

Powers documented his experiments with "technology fasting" and other forms of pared-down living in a 2014 book New Slow City, but he continues the same habits to this day. "It's like Thoreau said 'Simplify, simplify,'" he explains. "When you simplify things, your life just becomes so much richer."

Now living in Bolivia and working on a study showing the correlation between GDP, carbon emissions and happiness, he's trying to instill the same boundaries to his children. His four-year-old "has basically never seen a television," he says, "and my wife and I lead by example for our 12-year-old, talking to each other instead of being glued to our screens." While he admits that being unplugged "is easier in Bolivia" than New York, his former full-time home, his ideas have broad practicality. "This is not a radical thing," Powers says. "Simply connecting in person, as opposed to online, is a big step people can take."

Importantly, Becker, Alter and Powers are not Luddites. To Becker, technology actually has an important role in making our homes better. "Technology can be quite helpful in removing clutter inside the home and allowing us to live with fewer possessions," he wrote in an e-mail. "Our phones take the place of many things that used to take up lots of space: books, movies, photos, maps, cameras, mail, credit cards, etc. [They] almost act as a Mary Poppins handbag of sorts – lots of stuff stored inside a very small package."

Alter adds a similar sentiment: "I don't think there's anything inherently wrong with smart home tech – or with any tech as long as it makes our lives better. People just happen to feel that screens are making their lives less fulfilling and evidence bears this out. But if tech is a simple utility – if it makes our lives easier to live or more fulfilling, then I'm all for it."

I know what Alter is talking about. It's about finding that balance between utility and utter addiction. When my partner and I first moved in together 10 years ago, I was still a university student and he had just graduated. We couldn't afford Wi-Fi, so we went without it for four months. Smartphones weren't yet a thing. Instead of compulsively checking our e-mails (we saved that for when we were at work and school), we read books and talked. It was nice.

But as life became more complicated, Wi-Fi became a necessity, as did smartphones. We wouldn't be able to make a living without either, more likely. But creating boundaries in our home – where technology only comes in so far but the rest is up to us – creates a sense of peace. It makes our place feel like a sanctuary from the chaos of the world, and helps us recharge for the next time we go back out there.

Smart kitchens: Take a look at how your dinner is going digital
December 16, 2016
What Gen Z can teach the rest of us about taking a social-media vacation
July 21, 2016
Why it's time to put your smartphone down. Seriously
October 8, 2015 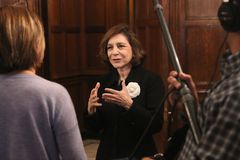