When The Walking Dead began in 2010, the apocalypse had already arrived: Its hero, Rick Grimes (Andrew Lincoln), woke up from a months-long coma to find himself in a world rendered long-since unrecognizable. And for five years now we've watched through laced fingers as Rick and his fellow survivors have eked out a living without power, without sanitation, without any of the comforts we take for granted. But toward the end of the show's acclaimed fifth season, everything changed. Our heroes found refuge in Alexandria: a gated community in the suburbs of Virginia, built before the rise of the undead as a sustainable, off-the-grid neighbourhood that is still fully functional. After enduring for so long in what were essentially makeshift shelters – including a campsite, a farmhouse, and even an abandoned maximum-security prison – Rick and the others can hardly believe the opulence and splendour of their new home.

Nor are they the only ones amazed. To anybody watching the show it ought to seem incredible, after seeing the apocalyptic state of the world, that a place like Alexandria could not only exist, but actively thrive. Alexandria looks like any contemporary middle-class subdivision. It runs as smoothly as one, too: it has running water, working heat, electricity to spare. Even the lawns are a healthy green. If we had the will, do we have what it takes now – logistically, financially, technologically – to build sustainable, off-grid communities like this for ourselves?

Rick Grimes has scarcely seen a working power outlet since waking up in the apocalypse. And yet in Alexandria everything works as it would in an ordinary suburban home: Residents can light their rooms and cook their food whenever they'd like. (Rick's son Carl even plays some video games with the neighbourhood kids.) It's certainly an appealing prospect. But is it plausible?

"A scenario like that is entirely possible," says Phillip Vannini, professional ethnographer and director of the new documentary Life Off-Grid. "More than possible – it already exists." Vannini points to towns in Canada's Northwest Territories as examples of functioning "microgrids," or power supplies designed to service communities "disconnected from the utility infrastructure." While cities like Inuvik are powered by large generators that draw from fuel-filled cisterns nearby (those cisterns are periodically replenished by oil barges along the Mackenzie River), more northern communities have been turning to solar power for independence from fossil fuel (and from the federal government that supplies it).

A landlocked suburb like Alexandria, of course, wouldn't have the luxury of a scheduled oil-barge resupply – so a self-sustaining, renewable alternative would be preferred. Vannini suggests a system designed to utilize "a combination of solar, wind and microhydro," the latter drawing power from local creeks. On The Walking Dead, the founders of Alexandria rely on solar panels installed around the community. But the manufacture of solar panels and batteries, Vannini cautions, "is not something you and your neighbours can do in your garage" – the logistics of such a robust power supply require a costly upfront investment and the will to make it work.

One of the few indulgences Rick and the others allow themselves upon being welcomed into Alexandria is a hot shower – a rare treat in a world overrun by the undead. Fortunately running water isn't a particularly difficult amenity to arrange (unless you live in drought-ravaged parts of North America, such as California, where some residents resorted to meticulously recording each litre they use for flushing toilets, washing dishes, bathing and drinking). "Water runs off-the-grid in most of the world," Vannini explains. "If you live in a city, the municipality takes care of it for you. But water is essentially a very easy thing to take care of." All that's needed is groundwater and a system for collecting rainwater as it falls.

The state of Virginia has an agreeably mild climate: Even in the dead of winter its temperatures rarely drop below zero. That's good news for our fragile Alexandrians, as heat often proves a vexing challenge for those who live off-the-grid. Canadians aspiring to do the same need a more permanent climate-beating solution. For much of the year, "we need to constantly heat our homes," Vannini says. "In Canada most of the heat that we use is generated by a combination of electricity and natural gas." Those living off-the-grid, meanwhile, use reliable and plentiful wood.

Wood only works as a sustainable, renewable resource, Vannini cautions, when a small group uses it as a heating source. "People need to live on, typically, about 10 acres of moderately forested property to regrow as much wood as they burn to keep warm during a normal year in Canada, and to soak up the carbon emission with their trees," Vannini notes. "So, it makes sense – economically, practically and environmentally – only in some parts of the world."

There are less obvious ways to be smart about heat: make sure your home is solar-passive. "These are homes that maximize a house's capacity to retain heat when needed and release excessive heat when not needed," Vannini explains. This is accomplished by maximizing solar exposure with a canny arrangement of windows – three quarters or more of which would face south while no windows at all face north. The collection of heat by this method can also be converted to additional (if modest) reserves of power.

Should these options seem too daunting, there is a more traditional method: heat pumps, which warm homes with the flip of a switch and are powered electrically. Alexandrians may well have enough solar panels wired up to warm themselves this way.

Anyone who has grown up in an urban environment is no doubt so accustomed to waste taking care of itself that the logistics of sewage disposal are a mystery. But Vannini swears that, ickiness aside, it isn't so hard to take care of. The solution, even in suburbia? "Compost-based toilets," he says. "This is something anyone can do. For several millennia our species has survived without flushing toilets. We can again."

Thus far on The Walking Dead we've not heard about Rick or anyone else deal with the mechanics of their business. But it's safe to say that the compost option will not be addressed. Instead, Vannini says, we can imagine a place like Alexandria making use of a septic tank and septic field – just as legions or rural Canadians already do every day. "This solution appeals to the fussiest of us and would be the same day to day as what you'd get at the Crowne Plaza." The only problem is that septic tanks need to be cleaned every few years.

The real question posed by the success and glamour of Alexandria is why communities of its kind don't exist like that around us now. If we can power our homes with solar panels, dispose of our waste organically, design our homes to better control heat gain and loss, heat with wood or sustainable electrical supply, draw our water from the rain and still live more or less comfortably, why don't we?

Vannini is quick to point out that plenty of towns already do function mostly off the grid, even if we don't think of them in those terms; the town of Jasper, Alta., for example, is run independent of the broader regional infrastructure. For the rest of us the major challenge would be to make the initial leap. "In principle there's nothing about this that's terribly complicated," Vannini says. "What's more complicated is to get started. It takes a special kind of will."

At the very least, living in our own off-the-grid communities will sure pay off when the zombie apocalypse starts. 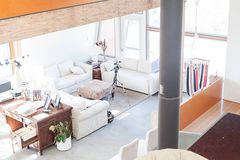 For today’s designers, sustainability is a necessity
August 5, 2015
24 Sussex: What a totally sustainable – and statement making – reno should look like
November 4, 2015 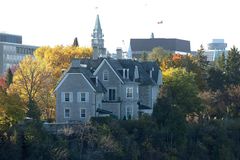