Gerene Murphy is no professional cook, but she's an expert at making perogies from scratch.

Using a rolling pin passed down by her grandmother, she rolls out dough on her countertop. She cuts out circles using the rim of a glass, and fills them with mashed potato, caramelized onion and cheddar cheese, painstakingly pinching them by hand into fat little dumplings. The Windsor, Ont., resident has been making the Slavic staples to rave reviews for years, using a recipe an aunt taught her at age 16.

So, six months ago, to earn some extra money, Ms. Murphy began selling her perogies to friends and family for around $7 a dozen.

She has also set up a Facebook page and posted a message on the classifieds site Kijiji to advertise them.

"I thought, 'Well I make these anyway, and I'm always giving them away, why not try [selling them]'" she said. She now has a handful of regular customers. "Home cooking is always appealing to people. I think people automatically think it's better quality."

Like Ms. Murphy, legions of home cooks looking to earn a little extra cash are selling their products - everything from Mexican pozole to Indian roti - straight out of their kitchens. Advertising on social networking sites and online classifieds, they're targeting students, bachelors and time-pressed families by promoting a purportedly healthier, more authentic and often cheaper alternative to restaurants and takeout.

Food inspectors are less than enthusiastic about the practice, warning they have little control over the sanitation and safety of food prepared in residential kitchens.

Nevertheless, the appeal of buying food from someone's home instead of at a store "is huge," said Elise McPherson of North Vancouver, who recently posted a Craigslist ad to sell bread fresh from her oven.

"Probably the biggest argument I could make for it is that it tastes better," Ms. McPherson said. "But also you are not ingesting chemicals and preservatives. … You have options regarding the ingredients, you get guaranteed freshness, it is affordable, you can avoid line-ups, perhaps get free delivery."

She added that it also helps build community relationships, as the transactions give neighbours a reason to interact with each other.

In Mississauga, Ont., Ms. Jadeja, who declined to give her full name, said she decided to sell roti from her home after the recent birth of her second child.

"I've got a small baby, so I can't think of working outside [the home]" she said, noting that since she makes fresh roti for her family everyday anyway, she is selling them at $1 for three roti just to make a little pocket change.

Her ad, posted on the South Asian networking and classifieds site CanadianDesi.com, appears among numerous others that tout authentic, homemade Indian chapatis, daal and Pakistani kofta.

While there's little to worry about when it comes to "low-risk foods," such as baked goods and certain canned items, foods that contain meat, eggs or cream pose a potential health hazard. Because these ingredients can support bacterial growth, they are typically prohibited from being produced at home for sale to the public, said Dominic Losito, regional director of health protection for Vancouver Coastal Health.

"We've heard horror stories in the past about people doing some of that and changing baby diapers on the counter at the same time," Mr. Losito said.

Yet, he noted, there's little that food inspectors can do to ensure the quality and safety of home-prepared foods. "We have no right to enter anyone's home to see how they're cooking," Mr. Losito said.

Vancouver food inspectors can impose fines or seize high-risk, homemade products that are sold publicly, but they prefer instead to first educate individuals about the potential dangers.

While he recognized the growing appeal of food that contains fewer preservatives, it's usually the extra salt, vinegar and other additives in processed food that prevent food-borne illnesses, Mr. Losito warned.

In Toronto, you can sell from home if your property is zoned for commercial activity and your business has been approved by the local health department, said Jim Chan, manager of the city's Public Health food safety program. Also, food preparation areas must be separate from the rest of the home to ensure there is no contamination by pets and other potential sources of illness.

Due to limited resources, however, Toronto food inspectors are typically only able to investigate home cooks if someone has made a complaint, and even then, as in Vancouver, they cannot inspect homes if residents refuse them entry, he said.

In spite of tighter controls on the commercial food industry, Claudette Sole of Windsor, Ont., said the main reason she regularly buys handmade perogies from Ms. Murphy is because she trusts the home cook more than any restaurant or store employee.

"I know her, I know who she is, I know how clean she is," she said. "I know what goes in them, whereas at the store, I don't know whose hands were on them." 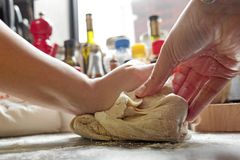