The fantasy TV series has sparked a craze for all things Scottish on the catwalk and beyond.

One of the biggest surprises emerging from Outlander, the hit cable TV series set in, of all places, Jacobite Scotland, is the rise of tartan as a major style trend.

As worn by Scottish actor Sam Heughan, who plays Highland warrior Jamie Fraser, the check has become chic, in an all-eyes-on-me kind of way.

The show returns to the small screen for season two on April 10 for Canadians, and already fans have written blogs detailing the fashions to come.

Not since Sir Walter Scott unleashed his series of Waverley novels on an adventure hungry readership early in the 19th century has cold Scotland seemed so hot. 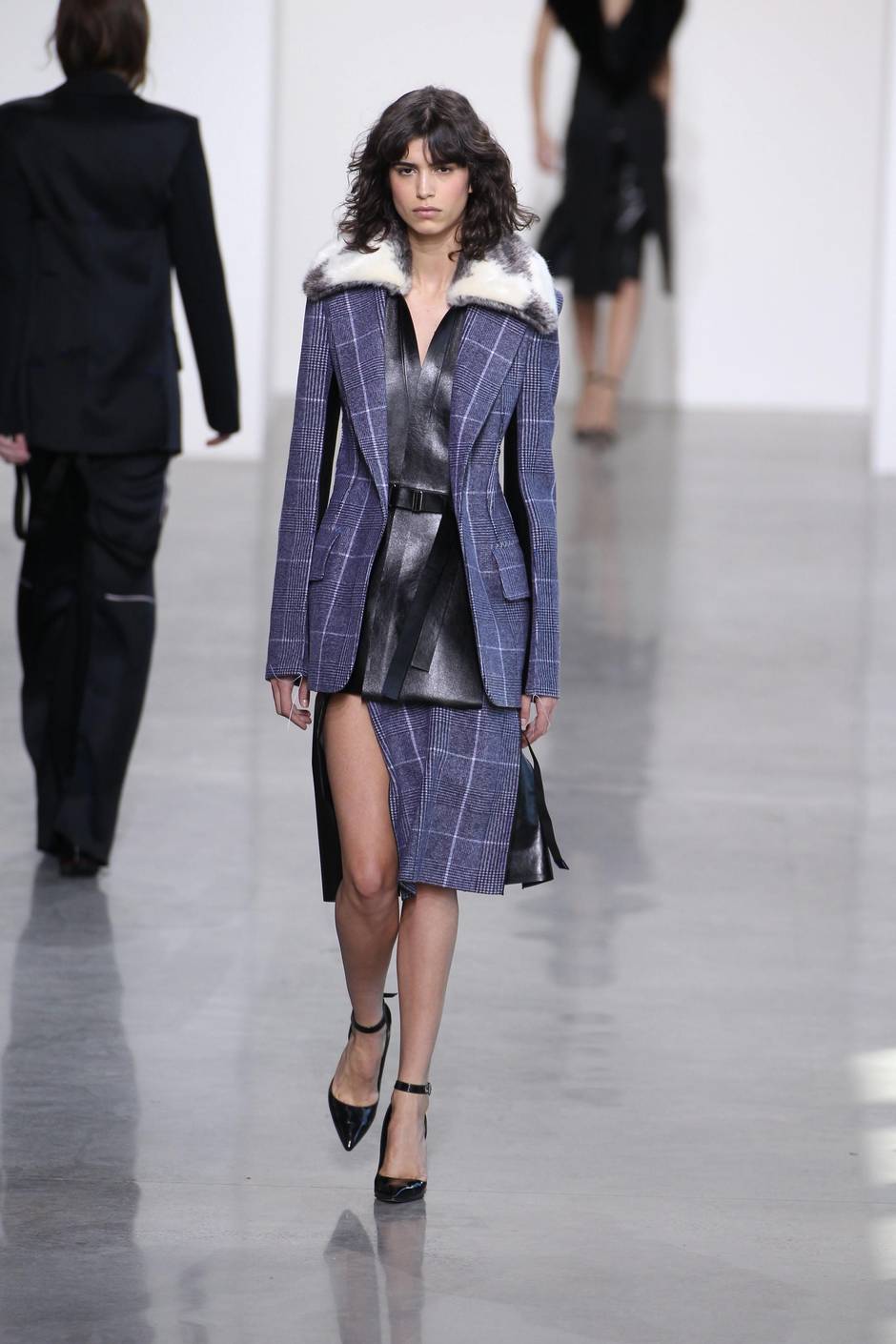 Tartan is also making a comeback in home decor: Ralph Lauren has tartan pillows, throws and arm chairs; Isaac Mizrahi has a tartan ceramic cake stand, and Distinctly Home, at Canada’s The Bay department stores, has tartan bed linens, along with duvets and shams.

“Outlander has made tartan sexy,” says Krista Dowson, a former National Ballet of Canada dancer-turned-designer whose upcoming line of dance leotards will be made of plaid material and trimmed with lace.

“I never would have worked with the pattern before – I associated it with lumberjacks – but Outlander has made it beautiful to me.”

If tartan is the new black, then Outlander is the new Game of Thrones, if not the new Lord of the Rings – dramatic fantasies that have influenced pop culture trends beyond their own franchises.

Based on the series of best-selling historical novels by professor-turned-fiction writer Diana Gabaldon, Outlander is credited for boosting tourism in the Highlands, rekindling national pride in Scottish culture and escalating the sex appeal of men in skirts.

Women are also huge followers of the show that is centred around Claire Randall, a war nurse who in 1945 accidentally time-travels to 1743 Scotland, just before the key Battle of Culloden at the time of the last Jacobite rebellion.

In the show, she has one husband in the 20th century (Tobias Menzies as Frank Randall) and another in the 18th century (Heughan).

Being a modern woman lends her a certain edge in a tribal society where men rule and women are second-class citizens, at best. Irish actress Caitriona Balfe, a former fashion model, plays her with gusto, attracting fans wanting to emulate her on-screen style.

For her character, costume designer Terry Dresbach, with Canadian Glenne Campbell, has created a magnificent wardrobe. Her designs range from a modernist knee length dress to 18th-century stays and laces and an embroidered linen-and-lace robe de cour wedding gown with a fully boned bodice and a wide and low off-the-shoulder neckline.

Dresbach has also designed a number of tartan gowns, including one with a floral bodice insert and cascading gold lace sleeves that Claire wears in the episode called The Gathering. 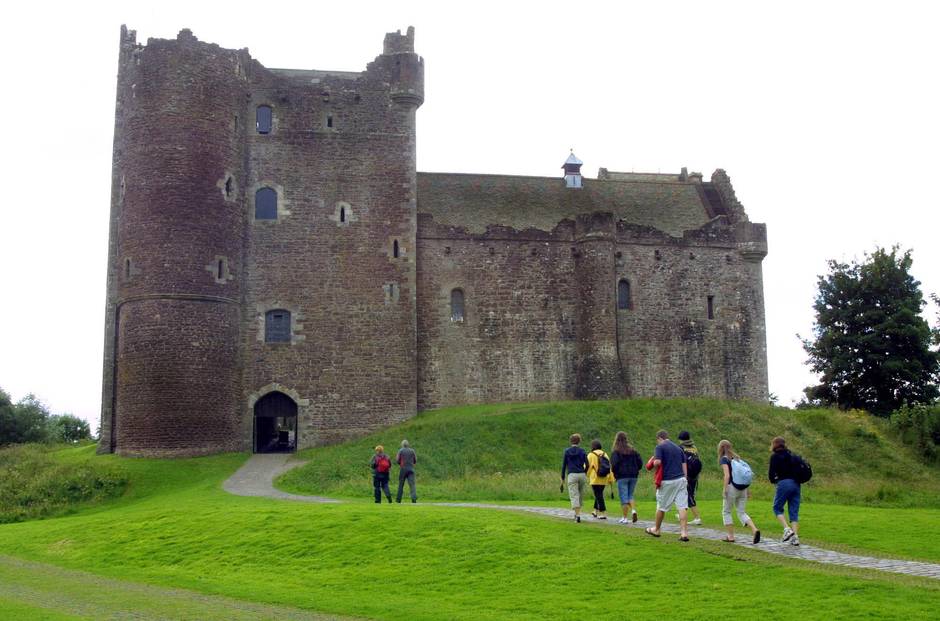 Visitors to Doune castle near Stirling in Scotland, where much of season one of Outlander was filmed, have increased 44 per cent. (MARTIN CLEAVER/AP)

To ensure that Balfe doesn’t freeze while filming outdoors amid the heather, Dresbach has added chunky knits and woolens to the eye-catching costume parade, sparking yet another Scottish-inspired fashion trend.

Internet sites such as Etsy and Pinterest are bulging at the seams with DIY knitting projects created by fans of Outlander wanting to imitate Claire’s romantically rustic look.

The Outlander effect can also be felt in increased numbers of tourists to the Highlands since the series first aired in August, 2014.

The biggest surge is at Doune castle near Stirling, where much of season one was filmed. Visitors to the site – fictional Castle Leoch – increased 44 per cent to 32,540 people during three record breaking months last summer.

This heightened focus on Scotland and Scottish culture is paying dividends to the wider artistic community, observes Alex Reedijk, general manager of Scottish Opera, which earlier this month made its North American debut at Toronto’s Harbourfront Centre.

The company presented a new work of contemporary opera, The Devil Inside, a variation on a theme of Faust by Scottish composer Stuart MacRae with a libretto by Scottish novelist Louise Welsh.

While having nothing to do with the Jacobite rebellion and with nary a piece of tartan in sight, the production nevertheless spoke to the Scottish cultural renaissance that Outlander is helping to stimulate.

“Outlander has contributed 40-million pounds to the film industry in Scotland and has sparked a renewed interest in Scottish heritage,” Reedijk says.

That interest is being felt around the world.

Dresbach’s historically accurate costumes will be the focus of a fashion exhibition hosted by Saks Fifth Avenue at its Los Angeles and New York stores, March 22 to April 11.

In May, Heughan and co-star Graham McTavish (clan leader Dougal MacKenzie) will be in Rome as guests of honour at a supernatural convention, just one of several international events that are helping to bring Outlander growing world-wide attention. 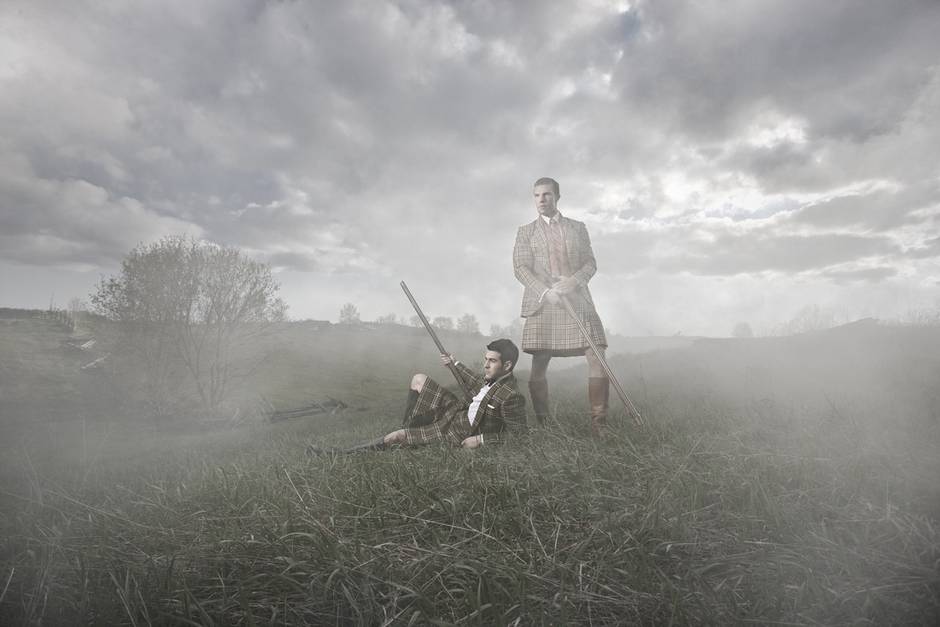