It's award season in book world. Short lists for the Triple Crown of Canadian literature - the Governor-General, the Giller and the Roger's Writer's Trust - have all been announced and the jury selections pored over like tea leaves in a mug. Ah, the comforting brew of Canadian literary culture. High in antioxidants, low in caffeine.

Like everyone else, I have followed the coverage and pondered the obvious: When exactly did Douglas Coupland find time to write another novel? Who does Annabel Lyon's hair? Is Margaret Atwood pissed?

One thing I have not wondered, however, is which of the anointed books to add to my shelf, worthy efforts though I'm sure they are. You read that right: This fall, I won't be reading any of the books that are nominated for Canadian literary prizes. And I don't feel guilty about it either.

It's not because I don't read books. On average, I go through one or two a week. And, like most committed readers, I always have done. As far back as I can remember, reading was a haven, a pleasure, a holiday from the tedious business of being me.

This is not to brag. I don't see anything pretentious in reading. Nor do I view it as particularly virtuous or character-improving. I read for reflection as often as I read to avoid it. I find books - virtually all books - interesting just by way of their coming across my bedside table. Or armchair. Or breadbox. Almost everywhere you look in my house you will find a book, usually a paperback, smushed face down where I left it when the kettle boiled or the doorbell rang. And the books in question are never the ones you find on the current bestseller or prize-nomination lists (though I hope to get around to those some day too). Instead, they come into my life organically - almost randomly - through recommendations, browsing, listening to the radio and, more often than not, other books.

Last month, for instance, I bumbled my way through a mixed bag of stuff including the 1996 memoir Are You Somebody? by Nuala O'Faolain, Heartburn by Nora Ephron, Henry James's The Wings of the Dove , The English Passengers by Matthew Kneale, Frances Osborne's The Bolter and a travel memoir by Paul Theroux about walking around the English coast during the Falklands War.

I had no idea why I ended up filling my hours with these books and not others. At the time, it seemed completely accidental. But, looking back on it, there were central themes that must have been the attraction - the conundrum of marriage, immigration, fear of loneliness - that unite all these seemingly random choices. A retroactive reading list, if you will. This serendipity gives me far more pleasure than the smug bragging rights of having slogged my way through the Booker long list. It is, in my view, the very point of reading itself.

Serious readers, of course, don't read out of cultural obligation. Serious readers read because we want to escape into another world, and we don't need a prize jury to help us navigate it.

Now don't get me wrong; I have nothing against prizes per se. They bring money and publicity to writers of books (an impoverished minority, among which I count myself). Perhaps most important, they bring in more readers, and who can argue with that?

Well, actually, I can. Because despite all the good that literary prizes provide - and I say this as a member of the Authors' Committee of the Writers' Trust of Canada - there is also an inherent danger in their increasing cultural primacy.

As one Canadian writer who did not want his name used recently said to me in an e-mail, the problem with prize lists is that they take something intimate and eclectic and turn it into a socially sanctioned Cultural Event.

"Reading - unlike multiplex movie-going, say - is inherently idiosyncratic," he wrote. "Its idiosyncrasy is its strength, the breadth of library and bookstore choices offering a feast of discoveries for the curious and story-hungry. Prizes, on the other hand, ultimately work to shape a vast plurality of tastes into a single, institutionally endorsed selection. The Giller is a successful venture, no question about it. But successful at what? Bringing new readers to exciting, boundary-pushing, pleasure-filled books? Or calcifying CanLit into a predictable brand?"

I know what you're thinking. Those sound like the words of a writer who has never won the Giller. This much is true. That's the funny thing about prizes. They're meaningless until you get one. At which point they're the best thing since sliced bread.

I'd love to win a prize as much as I doubt I ever will. My aversion to short lists is not as a writer but a reader. Like high-school English curricula or a prison library, they impose dour limits on something I prefer open-ended.

So why not read something else this prize season? Follow a whim. Don't be afraid. How about an obscure graphic novel or a new translation of an ancient epic poem? Just let me check the breadbox. I might have just the thing.

Travel with your parents puts the fun in dysfunctional
October 2, 2009 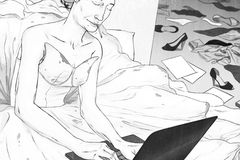 Sex and the City: The Platinum Years
September 25, 2009
Follow Leah McLaren on Twitter @leahmclaren
Report an error
Due to technical reasons, we have temporarily removed commenting from our articles. We hope to have this fixed soon. Thank you for your patience. If you are looking to give feedback on our new site, please send it along to feedback@globeandmail.com. If you want to write a letter to the editor, please forward to letters@globeandmail.com.
Comments