It's not hard to take action and help someone who needs it, says Jacob Tremblay, a 10-year-old movie star who will be among the celebrity speakers taking the stage at We Day Toronto on Thursday.

He makes it sound like downright fun. "If you see a kid who's not having the best day, you can make the day better just by giving him a smile," Jacob says. "Or her," he adds gleefully.

It seems Jacob loves talking about kindness. On the phone from his home in Vancouver, he practically bursts with excitement at the prospect of "putting a little happy in everything" on We Day, which celebrates young people committed to making a difference in their communities. In his own life, Jacob chooses to share kindness in simple ways. Just recently, he says, he helped out a kid in his class who wasn't feeling well. And he always makes sure everyone is invited to play soccer at recess.

His joyful voice will be one among many in the diverse lineup of speakers at We Day Toronto. He will take the stage alongside high-profile activists such as actors George Takei and Mia Farrow, athletes Rick Hansen, Andre De Grasse and Penny Oleksiak, Toronto Raptors president Masai Ujiri, former United Nations Secretary-General Ban Ki-moon, documentary maker Alexandre Trudeau, and YouTube personality Lilly Singh.

Jacob's excitement about being a nice guy might have something to do with what he learned from his most recent acting gig. He stars alongside Owen Wilson and Julia Roberts in the movie Wonder, set to hit theatres on Nov. 17. Based on R. J. Palacio's bestselling children's novel in 2012, Wonder tells the story of Grade 5 student Auggie, born with Treacher Collins syndrome, a rare genetic condition that affects the development of bones and tissues of the face. Because of his different facial features, Auggie experiences bullying at school but still manages to find his way socially. In the end, he becomes a hero.

"I was so honoured to play Auggie," says Jacob,whose breakout performance as an actor came in the 2015 film Room. "He's really independent, and even if he gets made fun of a lot, he will never stop doing what he wants to do."

For the movie, Jacob wore facial prosthetics, which he thought was pretty cool. And though itchy, they were worth it to make a film like Wonder, he says. "I really like the message. There aren't a lot of movies with messages for kids and I think [Wonder] will be able to stop bullying."

In addition to inspirational speakers, We Day will feature live performances by musical groups Celebrity Marauders and Hedley, as well as Kelly Clarkson, Vanessa Hudgens and Shawn Hook.

The full-day, stadium-sized We Day experience is also pretty exciting for Hannah Alper, a 14-year-old activist who will be one of four youth hosts at We Day Toronto.

"I love We Day because it makes me feel I'm not alone," says Hannah, a Torontonian who, at 9, started using her voice to initiate change and launched her blog callmehannah.ca to promote animal rights. She has since branched out, taking on a wide variety of social and environmental issues in a way that makes sense to children, and drawing attention to other people who are creating change in their own ways, big and small.

For example, one of the change-makers she profiles in the book is a 13-year-old who raised money through a lemonade stand and gave the $200,000 proceeds to charities fighting to end child labour. "I really believe that if people find a role model and they find the thing they're good at, they can make a difference," says Hannah. "Everyone can do something."

So, what's she good at? "I'm good at communicating," she says. "I love to talk, as you can probably tell."

In addition to her book, she has put her communication skills to work as a motivational speaker, participating in no fewer than 28 We Days. That's a lot of talking. But it looks like Hannah can handle it.

Scheduled talent lineup for the 10th annual We Day Toronto at Air Canada Centre on Thursday.

Scheduled talent lineup for the second annual We Day Family in Toronto at Air Canada Centre on Thursday. 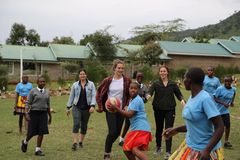 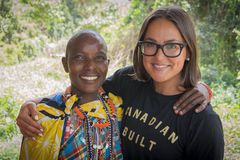