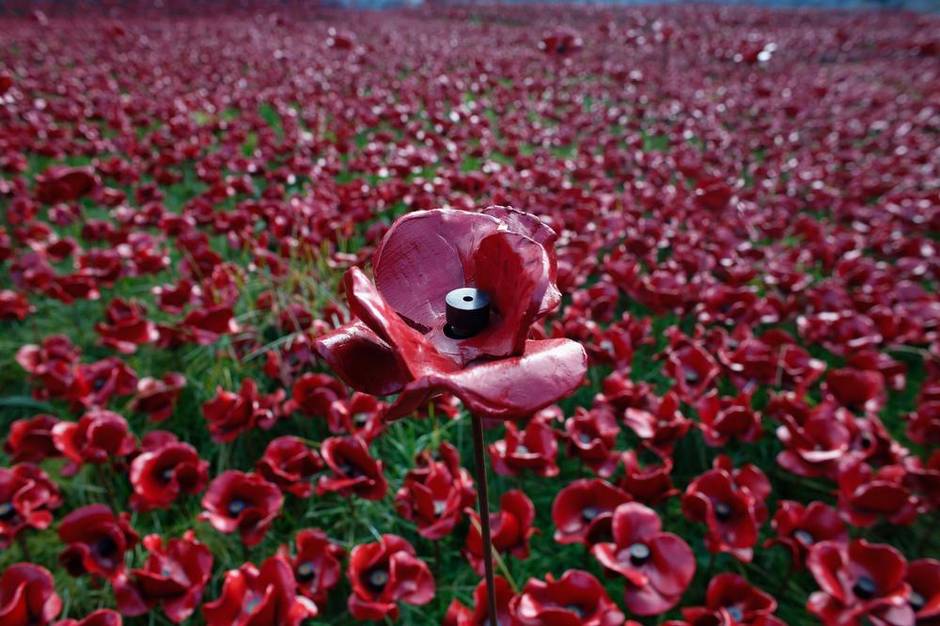 Ceramic petals are secured on a metal stick with rubber washers before volunteers use a small mallet to plant it. (Jim Ross for The Globe and Mail)

A red flood spreads out before us as we emerge from a door in a wall. Ceramic poppies bleed from the Weeping Window in the bastion wall on the other side, rise in a wave over the causeway, filling the 10-hectare moat of the Tower of London.

Dressed in dark blue tunics with red trim, emblazoned with ER on the front, and high, brimmed hats with a Tudor rose, Beefeaters move through the field, as if on cue. They look like characters from a child’s imagination in a surreal, red landscape. High above us, thousands of people line the moat’s outer wall to witness the living theatre that marks the centenary of the start of the First World War.

We’ve been issued gloves, a red T-shirt with “Volunteer” on the back, a commemorative button and safety glasses. We’ve just watched a video in which a jolly Beefeater – or Yeoman Warder, as they’re called, all of whom are war veterans with at least 22 years of service – has carefully instructed us on how to assemble a poppy, a matter of pushing rubber washers and a stopper on a metal stick, then placing a ceramic blossom on top and securing it with a small cap. With a small mallet, each of us in the group of approximately 200 volunteers will then hammer another life into the ground, commemorating the nearly 900,000 British and Commonwealth servicemen, who died in the Great War. That number includes the nearly 66,000 Canadians lost in the one of history’s bloodiest conflicts.

It’s not hard to feel part of the historical set design in England. Life here is a mille feuille, layers and layers of stories; the past always in competition with the present over which is more compelling. The Tower of London, built following the Norman conquest in 1066 on the edge of the River Thames, has seen its share of powerful narratives: two princes killed by their uncle so he could become Richard III; the beheading of Anne Boleyn; the imprisonment of Elizabeth I. 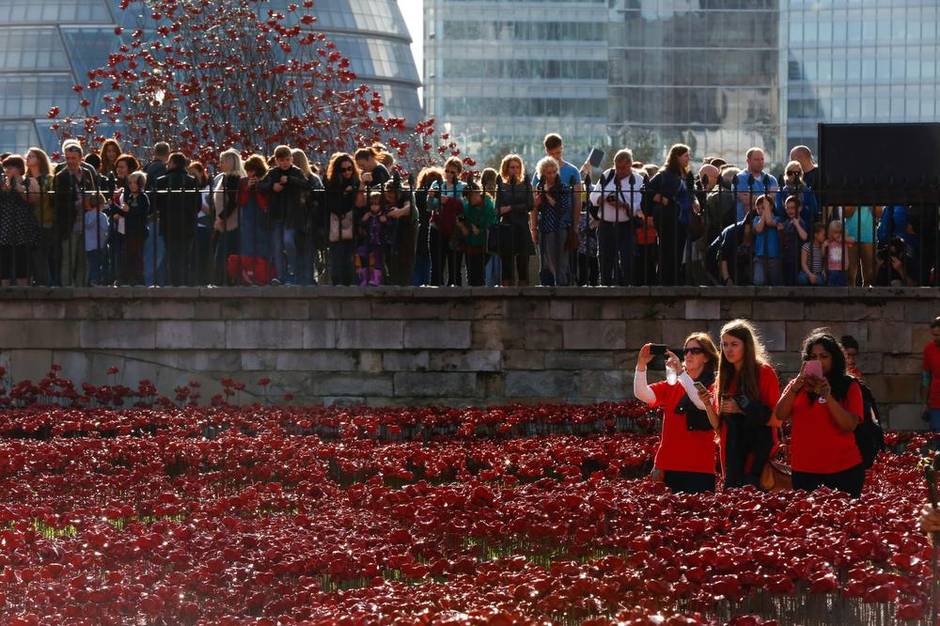 Crowds and volunteers gather at the poppy installation at the Tower of London. (Jim Ross for The Globe and Mail)

But since August, it has attracted nearly four million visitors, not just because it is one of the country’s most popular tourist attractions where the Crown jewels are displayed. Blood Swept Lands and Seas of Red is a temporary installation by ceramic artist Paul Cummins, in collaboration with award-winning theatre designer, Tom Piper. At first, organizers weren’t sure the ceramic poppies – which sell for £25 (nearly $45) to raise money for veterans’ charities – would be popular. But all 888,246 were sold out before the end of October.

“We didn’t think we’d get enough volunteers, either,” adds Kirsty Baxter, the project manager and a retired British army major. By the time the last poppy is planted in the moat Nov. 11, nearly 20,000 volunteers will have participated, installing the flowers at a rate of nearly 70,000 a week.

“That Beefeater issued those poppy instructions just like an army major, telling you methodically how to load a gun, first do this, then do that,” chuckles Bradley Powell, a 31-year-old ex-soldier and poppy volunteer, as we walk to the west side of the moat where our team of 20 people will work for a four-hour morning shift. “I am a patriot. I love my country,” he explains matter-of-factly when asked why he wanted to help commemorate the men who died. 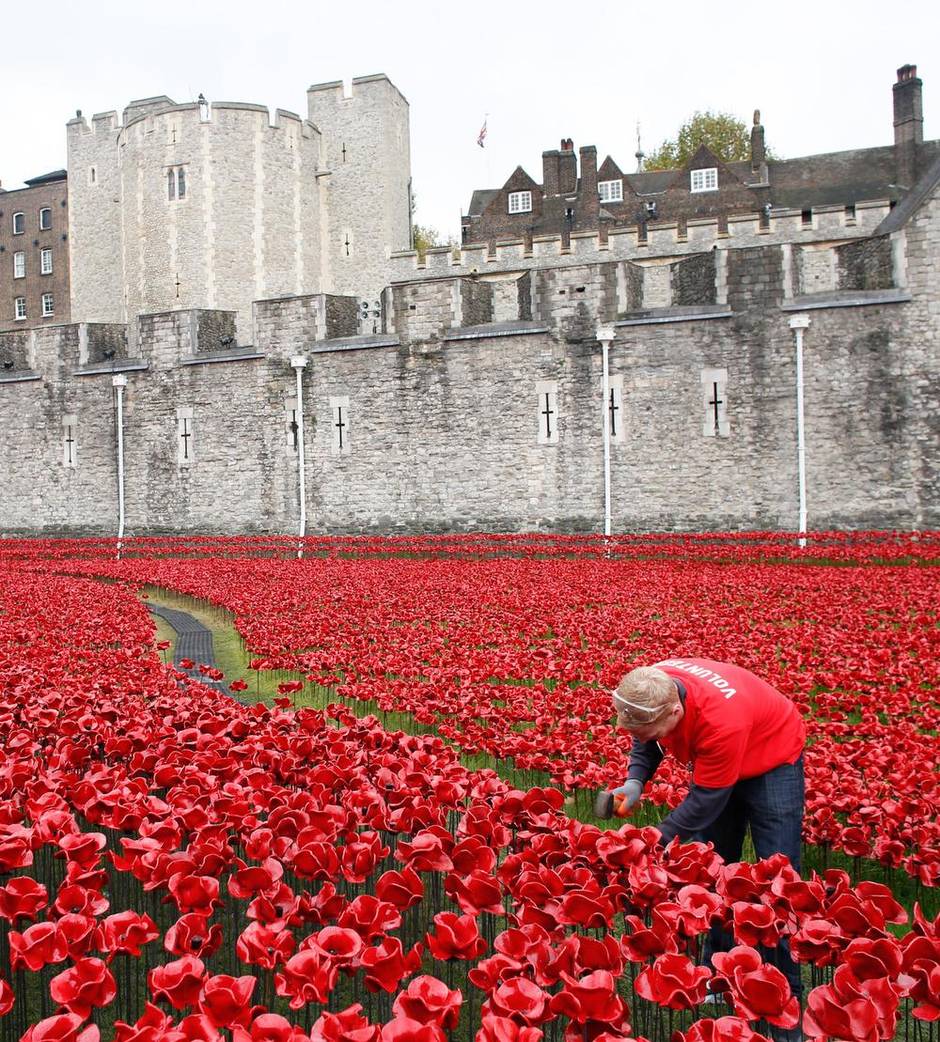 A portion of Blood Swept Lands and Seas of Red will remain on display past Remembrance Day. (Jim Ross for The Globe and Mail)

The volunteers are young and old; women and men. “It is iconic,” says Paula Michel. “Odds are, we all have relatives who died or served in the war. It’s to take part in history.”

“My husband’s great-grandfather died in the war. He was buried in France. We visited his grave, and now I am doing this for him,” says Anne-Marie Gould, who wears a scarf with a poppy design. She takes out her smartphone to show me a picture of Private John Alfred Ling from the Royal Warwickshire regiment who was killed in the spring of 1918.

“I cried when I got the e-mail to say I could be a volunteer,” says Kerry Cohen, who works in a nearby office and has seen the tide of red spread over the past few months. “I want my children to understand that all these poppies represent men who died.”

A world map posted on the wall inside the project’s office has a wide scattering of red dots marking where volunteers have come from. “Many people from other countries are living and working here in London, but we had one couple come all the way from Singapore just to volunteer,” Baxter says. Members of the Royal Family, including Queen Elizabeth, the Duke and Duchess of Cambridge and Prince Harry, have come to view the installation. So too have actress Helen Mirren, novelist Sebastian Faulks, author of the First World War story Birdsong, and Michael Morpurgo, author of War Horse, which has been adapted for the stage. The art project has captured the public imagination and garnered global attention, prompting authorities in London to warn people not to visit over the past two weekends out of fear for public safety due to the crowd’s size. It is estimated that 100,000 people have come every day in the past few weeks. 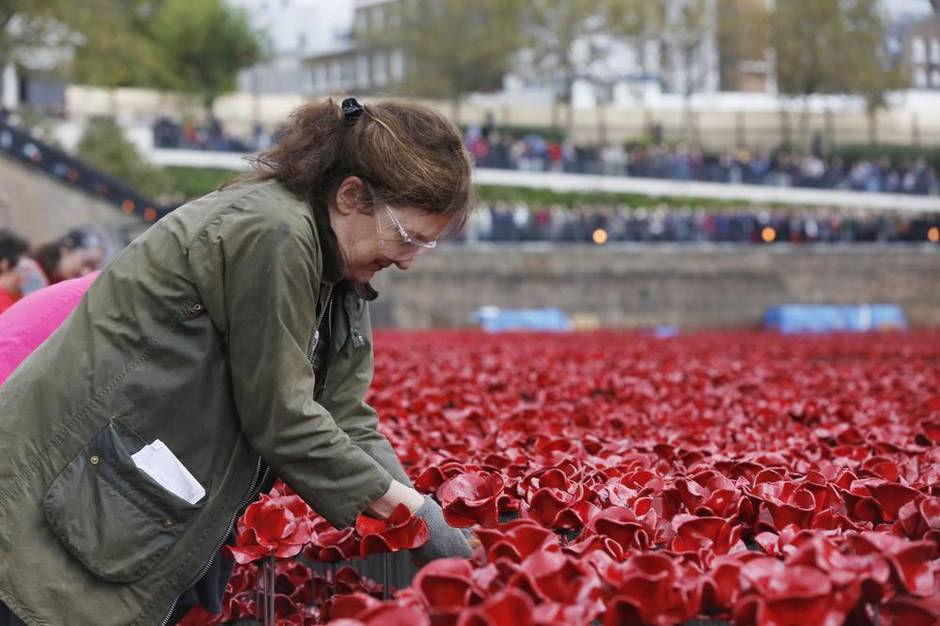 The writer plants poppies in London. (Jim Ross for The Globe and Mail)

Each of us carries a box of 36 poppy blossoms that have been made in Derbyshire by Cummins and a team of local artists, who rolled out clay to cut out the petals, shaping them individually so each blossom is unique. Cummins conceived the idea when he came across a poem by an unknown First World War soldier that begins with the words, “The blood swept lands and seas of red.”

“In Flanders fields, the poppies blow,” wrote Canadian soldier, physician and poet John McCrae in the first line of his famous verse that has become integral to Remembrance Day celebrations. And here, the ceramic blossoms move gently in the breeze, catching the sun on a warm November day. They’re designed to wobble slightly on their metal stems, and are of different heights.

Our group splits into two, taking turns assembling the washers on the stems and then planting them with a blossom placed carefully on each.

The fixing of the plastic washers on the stems is hard work. They’re stiff and hard to get on. Even the ex-soldier is tired. “This next hour is going to go slowly,” he says.

“I have poppy thumb,” says another woman. “I may not be able to hold my wine glass tonight.”

“Ah, just use a straw,” quips another. Few people know each other, but a spontaneous camaraderie has blossomed among us.

Our team leader, Ed Meltzer, a 19-year-old on his gap year, passes by our table, overhearing the jokes. “Get back to work, the lot of you,” he teases.

When it’s our turn to plant, one of the women and I alternate hammering in the stem and putting the poppy on. “Some shorter ones in here would be good,” suggests Meltzer, waving his hand through the air to indicate how the set designer wants the poppies to move in an undulating wave to the edges of the moat. 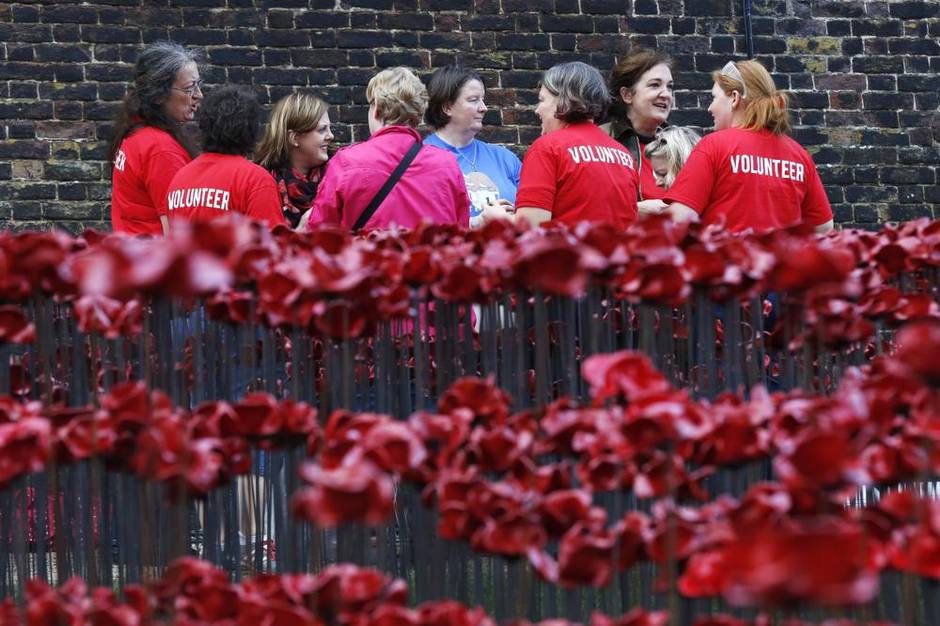 (Jim Ross for The Globe and Mail)

I raise my head to look across the field of red. So many poppies, so many men. During the war, soldiers trained in the moat, the regiments meeting up to prepare for the horror of a conflict no one could imagine. I think of their faces, having seen many photographs of young soldiers, their expressions hopeful, stoic, innocent. I had a great-grandfather who survived the First World War, and a great-uncle, Edward Cassils Evans, who died in it. I have read his diaries, stunned by his idealistic, romantic notions of war. Wounded at the Somme, he returned to Montreal, only to choose to go back to the front, where he was badly wounded again at Amiens, dying later in an English hospital, age 23. But you realize, looking at the vast field of loss that it’s not about specific family connections to the war and the deaths, it’s about something larger, the vast tide of humanity that pushes forward into war, willing to make the sacrifice.

Jonathan Jones, art critic for the Guardian, has been a lone critical voice, writing that the installation is too pretty to be meaningful and should have consisted of barbed wire and bones. Beauty stirs us, though, draws us in, demands we pay attention.

Every evening at dusk, a Beefeater reads out a roll call of names of soldiers who died, submitted by the public. The Last Post is played. Terry Humphries, one of the Beefeaters, tells me he has read out about 180 names of Canadian soldiers. “You don’t discriminate with the dead,” he says solemnly.

Due to popular demand – and the intervention of Prime Minister David Cameron, mayor Boris Johnson and many others – a portion of the poppy installation is staying on past its scheduled end on Nov. 12. The poppies will be plucked from the ground to be washed, packaged and sent to those who bought them. What took four months to install will take two weeks to remove. They were here. And then they’ll be gone. Fleeting. Fragile. Like life itself.

And I realize suddenly that the genius of the commemoration is in the human participation, the work of hands and hearts. In the end, that’s all any of us can do.