Business travellers heading abroad this summer should check whether they need to update their vaccines to cover diseases such as measles, experts say.

Complacency, tight schedules, forgetfulness and a vocal but discredited anti-vaccination movement all lead many business travellers to neglect to get their shots, says Alok Sood, physician at Albany Travel Medicine Clinic in Toronto.

"In a way, vaccines are a victim of their success," Sood says.

"Generations ago, before they were prevalent, thousands of Canadians would die from illnesses that are now vaccine-preventable. Because we are not seeing those illnesses, people are leery of getting vaccines that they feel they don't need."

In April, Theresa Tam, Canada's interim chief medical officer of health, said Canadians should make sure their measles vaccines are up to date, particularly for people travelling overseas.

People who either did not have measles as a child or have not been vaccinated should arrange to get the measles shot, while those who are unsure should check with their doctor.

Travellers who require a measles shot should be inoculated six weeks before travelling, Tam said.

"You should definitely consider getting vaccinated, depending on your age and where you're going. Anyone born in Canada between 1965 and 1990 [who has never been inoculated] may not be immune to measles," Sood said.

Those born after 1992 likely received vaccinations that became available at that time and since, while baby boomers and older generations likely had the measles or mumps as children and have built up immunity.

Measles is a virus that can spread quickly through droplets in the air when an infected person coughs or sneezes or any individual touches objects recently exposed to mucus or saliva.

A complication has arisen in that the anti-vaccination movement has urged people not to get inoculated. The anti-vax movement has been bolstered by the support of U.S. President Donald Trump and celebrities such as TV personality Jenny McCarthy.

In May, the U.S. Centers for Disease Control and Prevention (CDC) reported that 53 per cent of U.S. adults who should get vaccinated against measles before travelling abroad did not do so.

The CDC study found that while most of the 6,612 eligible travellers surveyed simply refused the vaccine, 24 per cent of cases involved issues with access to health care – in most cases the need to see a second doctor.

Nine out of 10 unvaccinated people exposed to measles by entering a room where an infected person had been within the previous two hours will be infected, researchers noted in the Annals of Internal Medicine.

While most vaccinations in Canada are free under provincial and territorial health care, patients sometimes have to pay for those that are recommended specifically for travel but are optional.

In Canada by the beginning of April, there have were 10 confirmed cases of measles in 2017, all related to travel, with several additional cases being investigated.

Toronto Public Health said that three of the confirmed cases were connected to people who travelled to or within Canada on WestJet Airlines or Emirates flights in the last two weeks of March.

Business travellers should consider the measles vaccine depending on where they are going, Sood said. Romania, for example, reported nearly 2,000 cases since February of 2016, including 17 children who were not vaccinated and died.

The federal government's Public Health Agency of Canada has reported that between 2005 and 2014 the number of vaccine-preventable infectious diseases (for all Canadians, not just travellers) jumped by 30 per cent.

Speaking to Global News, Tam said that, "the vaccine coverage rate is not as high as it should be. … It's close to 90 per cent. But we need 95 per cent to protect the population."

Sood noted that some parents and individuals resist getting vaccinated because they assume that if everyone else gets inoculated, they will be safe. But this theory is not safe, he noted.

"You could pick something up in the waiting room," he said.

A recent study by the C.D. Howe Institute called the level of unvaccinated children in Canada "alarming," but suggested that complacency rather than the anti-vax movement is mostly to blame.

"A vocal few Canadians – perhaps 2 per cent of the population – hold anti-vaccine views, but they are not the main reason for insufficient vaccination coverage, and arguably too much attention and energy are spent trying to engage them," says the study, by authors Colin Busby, Aaron Jacobs and Ramya Muthukumaran.

Sood says that as a family physician at a travel clinic, he occasionally encounters patients with anti-vaccination views, but his main impression is that business travellers face other barriers to getting their shots.

"Often they're told to go on a business trip in two or three days, and they simply don't have time," he says.

Fancier food on the menu at Canadian airports
May 23, 2017
Defeat the airline squeeze with a roomier premium seat
May 23, 2017
A road warrior’s top 10 tips to make travel bearable
November 23, 2015 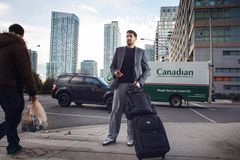