Sophy Robson does not design clothes, shoes or handbags. She's not a model or photographer. Her name does not appear at the top of a magazine masthead. But the Londoner has become a major force in the fashion world - as one of a handful of experts who have emerged from the beauty sidelines to champion the Lilliputian surface of the nail bed as the next frontier in creative design.

In a post It-accessory, post-recessionary era, nails have been elevated to statement-making status thanks to affordability and celebrity. Dita von Teese shows off her perfect moon manicure, while Katy Perry updates her Twitter account with pictures of her outrageous nail looks and True Grit star actress Hailee Steinfeld was singled out on the Golden Globe red carpet as much for her hot-pink nails and matching lipstick as her striped Prada dress.

Among those who follow nail trends obsessively, the real celebrities are Robson and Peter Philips, Chanel's global creative director for makeup, who has positioned the luxury brand's polishes as the ne plus ultra in cult colour. Waiting lists for their limited edition lacquers like Jade in 2009 and Nouvelle Vague in 2010, put the manic into manicure and echo the hysteria that used to surround handbags and shoes - minus the four-figure price tags.

But it's not just new shades that have women excited. Unlike the airbrushed sunsets and wild orchids of yore, the new hand-painted patterns (feathers and stripes) or witty designs (mini apples and lips) add a level of luxe to this accessory.

Robson, who has been working in the industry since 2002, points out that many nail artists on the cutting edge aren't professional manicurists, but rather artists who appreciate the precision necessary to paint on nails. "It's almost like two separate entities," she says, "the old-school people who work in salons but are not up on trends and the people who clued up on trends but are not trained on manicures."

Toronto's Leeanne Colley excels at both. The owner of Tips Nail Bar & Spa, Colley not only handles her clientele at the salon, but also gets recruited to create elaborate nail looks for Canadian magazines including Glow, Fashion and Elle Canada (she was also responsible for painting the nails featured here), a relatively recent development. "A six-page editorial on nails just [wasn't]done in the past," she says.

As an old hand with 15 years of experience, Colley's delighted that women are making mani/pedis such a priority and credits the lagging economy for her increase in business - an up tick of at least 30 per cent last year. "I think manicures are an easily affordable way to look and feel great [and take risks]without breaking the bank," she explains. "I'm just excited that women so eager to play with colour now."

Essie Weingarten, arguably the most famous name in nails thanks to her eponymous line of polish, calls these women nailistas. "They can't go out without nails looking perfect," she says, but stresses that this does not necessarily mean fancy nail art. "[A nailista]is a woman who expresses herself with her hands."

From her office in Astoria, N.Y., Weingarten insists that "all rules have been broken" as far as one main style message per season. Rather, it's the notion of newness that keeps everyone on their toes. "There's always a new spin. Whenever someone walks in to salon, the first thing [she]asks is 'What's new?' " she says, adding that Essie releases colours every 90 days.

Not surprisingly, this hunger for what's next helps drive the entire industry. According to Nails magazine, a leading trade publication based in Torrance, Calif., the nail market in 2010 generated $6.27-billion, up from $6.06-billion in 2009. NPD Group, which tracks nail care sold in U.S. department stores only, reports that the category generated $15.3-million in 2010, up 39 per cent from 2009 (this includes nail enamel, base/top coats and nail care).

What many nailistas may not realize is that behind the industry's biggest competitors are even bigger beauty behemoths; last November, Coty acquired OPI (paying a reported $1-billion), while L'Oréal added Essie to its stable of brands for an undisclosed amount.

But despite the furor, Robson's not sure we've seen the tipping point. "I don't think [the industry]has peaked yet … I thought maybe [nails]would go back to natural, but no." Leading up to London Fashion Week, which wrapped on Feb. 23, she met with several designers to discuss their runway strategies, whereas in the past, she would have just appeared the day of the show. Creating a statement nail for the runway attracts increased media coverage; throughout the fall/winter '11 shows, beauty editors and bloggers have been stationed backstage, filing reports about the soft blue lacquer at Thakoon, black with gold sparkle at Yigal Azrouel and Dalmatian print at TopShop Unique.

She ended up doing eight shows in four days and highlighted the various looks on her blog. "There's lot going on behind the scenes. I think this year will be the year. " she says. Clearly she's nailed it. 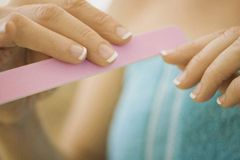 How do I protect my nails against the cold?
December 4, 2010 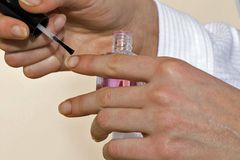