Judging from the depiction of fatherhood in most movies, you'd think all dads are simply a variation on three stereotypes: a bumbling but lovable idiot, a distant workaholic or a nutcase. And that's if he's even around.

In Sofia Coppola's film Somewhere, which opens today in limited release, a bored, womanizing movie star named Johnny Marco, played by reputed real-life womanizer Stephen Dorff, is left to care for Elle Fanning's Cleo, the adolescent daughter he rarely sees, in the days before she leaves for summer camp.

Somewhere is not unlike Ms. Coppola's other beautifully shot movies about beautiful girls ( Lost in Translation, Marie Antoinette). But her new film is centred ona father who is, except for their week of video games and burgers, as unavailable to Cleo as he is preoccupied by strippers and sex. The sympathetic take on the relationship between Johnny Marco and his placid daughter is sweet, but far removed from the reality of most children of absent fathers.

The problems that affect the increasing number of children without dads (or with dads who drop haphazardly in and out of their lives) and the profound social issues they generate have been documented in many studies, most of them based in the United States, where one out of three kids is considered "fatherless." The U.S. Census Bureau notes that children who grow up without fathers are five times more likely to be poor. And the Journal of Adolescent Health reported last fall that upper-middle-class girls without dads are likely to experience early puberty, which has been linked to early drug use and sexual activity. Fatherlessness is routinely stated to be a major predictor of criminal behaviour and poor health. Boys who grow up without fathers have a greater likelihood of repeating the pattern.So why are so many films and television shows casual about bad dads?

Andrea Litvack is a professor of social work at the University of Toronto. Asked why absent fathers are something that Hollywood rarely gets right, she says: "It may not translate well because it's a very complex issue. There are many combinations of factors that impact on anyone's situation."

Except for the disapproving glare that Cleo gives her dad over breakfast after a starlet spends the night, their relationship is portrayed as fun and undemanding. Whatever feelings she has about her father aren't discussed. The other side of this Hollywood habit of diminishing an issue is that thorny social problems are sometimes exaggerated, which is no more plausible than Ms. Coppola's withdrawn approach.

Paul Moore, who teaches sociology at Ryerson University, says that depicting a social problem "is a form of exposure even when it isn't realistic." He says that sometimes issues have to be glorified to work onscreen. This is especially true when it's something that the audience may still be figuring out. Dr. Moore cites the 1979 classic Kramer vs. Kramer as an example, and says that while it was "revolutionary for its depiction of divorce at the time, we would now see it as utterly melodramatic."

It's unlikely that Hollywood will change its depictions of absent dads any time soon, but innovative ideas are out there to help combat the problem. Two years ago, Tom Matlack co-founded the Good Men Project, which includes a book, a magazine and a not-for-profit foundation dedicated to at-risk boys. Mr. Matlack says: "One of the core problems with manhood in America is that so many children grow up without fathers." He felt that no one was really talking to boys about issues such as death, divorce, war and sex, and when he speaks to audiences in places ranging from private schools to prisons, "jaws drop." Mr. Matlack wants to make being an engaged and active dad appealing. "What a mother gives a child is obviously essential, [but]I think what a father gives a child is equally essential and different," he says. "Every boy is asking themselves a question, 'How do I be a man?' and they're looking for role models, mentors, clues."

Prof. Litvack points to ABC's hit sitcom Modern Family as an example of how much the family unit has changed in the past 50 years. "We have to stop thinking of the mother, the father, the two children, the white picket fence as the norm," she says, and that in many families an absent father is "not necessarily perceived as a negative thing." 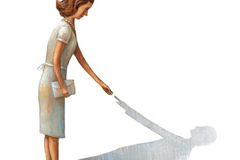