A drag queen sashaying to Lady Gaga’s 2011 hit Born This Way is nothing new, but when the performers are barely older than the song itself, that changes the equation. Last year, at Fierté Montréal, four preteens − three boys and one girl − took to the stage to a cheering crowd.

The queens had travelled from British Columbia, Missouri and Spain for the group performance. The Montreal Pride celebration was their first time meeting other children who did drag. The significance of like-minded peers wasn’t lost on their parents: “To not have to explain why he’s wearing lipstick or nail polish,” one mother explains. “To hang out with kids who totally get each other.”

This is a scene from Drag Kids, the new Canadian documentary having its world premiere on April 28 at Hot Docs in Toronto. Directed by Megan Wennberg, the film follows the preparation behind this one-off performance, observing the children − Bracken, Jason, Nemis and Stephan − carving out niches in an art form usually performed by adults.

Children performing drag is a recent phenomenon catalyzed, in part, by the popularity of RuPaul’s Drag Race, the television series that became available on Netflix in 2013. The reality competition brought the underground art form into the mainstream, decoupling it from its historic home of gay bars and onto all-ages platforms such as YouTube and Instagram.

This has pushed the craft into new territory, such as Drag Queen Storytime, where drag performers read children’s books for families, usually in public libraries. It has also created space for online performers such as 11-year-old Desmond Napoles (stage name: Desmond Is Amazing), who RuPaul has called “the future of America.”

The documentary is about the children, but also the parents, who may not fully understand why their children want to perform drag but support them unrelentingly. Nemis’s mother patiently colours his hair to a brilliant fuchsia. Stephan’s parents curate comments on social media to protect him from cruelty on the internet. Jason’s father teaches him to catwalk, a rebuttal to the homophobic and racist family life his father knew from the Bible Belt. At the performances, the parents are on their feet dancing, capturing the moment on their phones.

These acts of love create space for the children to express themselves, to allow another part of themselves to be made visible. The parents are pushing back against that moment in every young life when we realize we’ve broken some unspoken rule − a boundary that in some way threatens to invalidate our existence. With some gesture or turn of phrase, we betray ourselves to become an outlaw.

I felt such a moment around eight or nine years old. On a weekend afternoon, I was stomping across my bed like it was a stage. I pinched a fleece blanket, baby blue, around my neck, and imagined winning the Miss Hong Kong Pageant. I pictured that feeling of triumph, of having an audience’s attention for every movement − something absent from my day-to-day life as a lonely, bookish child.

Capes represented agency and power, even when they were just blankets. Sometimes, I was my favourite superhero, leaping high into the air or going invisible; that day, I was a pageant winner, twirling and waving to a fawning audience. My mother walked into the room, and I asked her to secure the cape to free my hands. I remember the conflicted look on her face, but she reluctantly agreed. As she pinned the blanket, she told me: “But just this once.”

It became clear I was breaking unspoken rules, and had made her my accomplice. It was disconcerting and confusing, because my actions felt natural − a part of me − and yet I felt the risk of losing something. What does it mean that the actions that felt so inherent to me were wrong?

The concern of my mother echoed something she recently told me: The most painful part of my coming out later as an adult was that she knew my life would be made much more difficult by the world. In the privacy of my room, she had helped transform blanket into cape, but she wouldn’t always be able to protect me − a life made no easier by the colour of my skin.

My coming out was a shock for my mother in part because she had nurtured her own ideas about who I might become, and now she required a recalibration. Drag Kids is a reminder that for all the progress society has made, the pressure to conform is still high, and that, with every move forward, there is almost always a pushback. Boys who sew or girls who play football are guided away from their hobbies (regardless of which gender they are attracted to), demanded to hide that part of their interest or risk being ostracized for being weird.

Those expectations can be set even before birth: Take the gaudy practice of gender-reveal parties, where soon-to-be parents invite friends and family to learn about the sex of the unborn children through a colour-coded gimmick: Pink or blue balloons sprout from boxes, or powder plumes from motorcycle exhausts, or coloured sponge inside of a frosted cake. These noisy and expensive parties have become customary within the past decade, and, as the discourse around gender takes steps forward, these charades act as a defence mechanism for the anxiety around shifting cultural norms.

Parents craft futures for their children they can only hope for, but ultimately can’t control. As I watched the confetti fall from the “gender reveals,” it reminded me of the glitter that rains during drag performances and at Pride parades, which plays a symbolic role: that even in difficult times, one can find whimsy, and joy, and fabulousness. I wondered if these parents would be as excited when their children finally get a chance to take the reins to reveal who they really are.

Jaime Woo is the author of Meet Grindr and an editor of Feel Your Fantasy, a fanzine about RuPaul’s Drag Race.

Our daughter and son-in-law are strict vegetarians. What if our grandson wants to eat regular food?
April 22, 2019 Why Ezra Miller is the style icon we need in 2019
Subscriber content
January 3, 2019 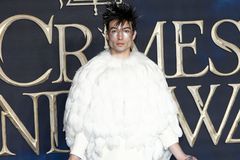