Question: My 2½-year-old old son enjoys talking about different ways he can scare or hurt people. These comments are brought up only when we are going to visit someone new or a public place such as a park. Some examples of what he would say when I tell him we are going to see these people: “I’m going put my water bottle on his face!” or “I’m going to push her and she’ll fall and she will cry!” What should I do?

Answer: I imagine hearing your son say these things makes you feel worried. I know many parents would be scared that this kind of talk means he’s not a good person and that he is bound for a troubled future. Don’t worry! There are reasons your son is acting like this and there is a lot you can do to help him.

While, of course, we would never let our child hurt or scare someone else, aggression in the toddler years is often developmentally appropriate and is to be expected. Aggressive behaviour peaks when frustration and big feelings are high, and impulse control and communication skills are low. Toddlers are still learning to regulate themselves.

The great news is that it sounds like your son isn’t actually doing any of the things he is talking about doing. If your son were acting aggressively toward other children, out of frustration or big feelings, we would want to focus on prevention. The fact that he is telling you about what he’d like to do before he’s even in the situation makes me think that something other than “normal” toddler aggression is going on here.

I think there are two things going on: anxiety and a feeling of powerlessness. You said he says these things when he is going to an unfamiliar place or meeting new people. These are situations that the best of us sometimes find anxiety-provoking. He also seems to be experimenting with power. At 2½, he likely feels powerless most of the time. Let’s address both of those issues.

Anxiety is another word for fear. When we humans get hijacked by fear, we go into a fight-flight-freeze response. This is what helps us survive in dangerous situations, or even situations that we perceive as dangerous. Traditionally, when we think of anxiety, we think of children who hide behind us or won’t get out of the car when in new situations. These reactions would be the “flight” or “freeze” of the fight-flight-freeze reaction.

We also have to remember the “fight” response of fear. Your son’s aggressive threats to hurt or scare people happen when he is anxious and his “fight” response has been activated. His primitive brain is trying to protect him from the perceived threat: the new people and situations. His brain has been hijacked and he is in warrior mode.

What can you do? If he were a bit older, I would advise you to use the Worry Brain strategy, a set of tools to help manage anxiety, to give him the ability to reset the alarm system in his brain. He’s too little for this right now though. He just needs you to help him feel safe.

When you hear him say something aggressive, take a deep breath and remind yourself that he’s only 2 and this doesn’t mean he’s a bad seed. I would simply say, in a concerned but not angry way, “Wow. That sounds like it could really hurt someone. How do you think that would make you feel if that happened to you?” Even though he’s just trying to let you know how he feels and not actually doing anything dangerous, it’s great to start to help him see how his actions affect others.

Let him know you understand he’s feeling nervous and that you’ll be there to help him feel comfortable. He can stay near you as long as he likes. We want to make sure he knows he is safe with you. There is no danger. We also want to normalize the anxiety he’s feeling. I would tell him that we all feel a little nervous in new situations. It’s not an emergency.

I also would suggest you play some fun power games with him. Do some roughhousing where you are the weak one. He is always the strongest, fastest and most clever. He pins you on the ground and you “can’t” get up. He races you and you always “trip” at the finish line. You “hide,” but he can always find you. Make it very silly and slapstick so he really gets laughing. As he laughs at you being powerless, he is working through his own fears and feelings of powerlessness. He won’t need to make intimidating threats to feel powerful.

Make sure he knows he is safe around new people and in new places, and help him explore his power in healthy ways. When you respond to the feelings that are driving his behaviour, the behaviour will stop. 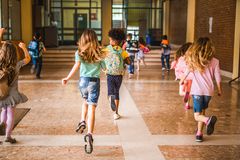 Opinion
My tween daughter doesn’t care about personal hygiene. How do I encourage her to take care of herself?
July 9, 2019 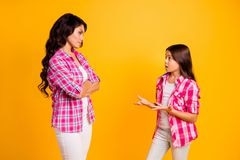