You might still be in the depths of Olympics madness, but September approaches. And with it, the shopping scramble to outfit university- and college-bound kids with electronics and other back-to-school gear. How do you know which tools will actually make a difference in the classroom, or which will give you the most bang for your buck?

We talked to about a dozen postsecondary students to tell us what supplies they really can't live without. High-tech is hot, but (go figure!) some old-school and makeshift favourites still make the grade.

Andra Ragusila, a graduate student at the University of Toronto, says she prefers to use a small laptop like a netbook because they're inexpensive and light, making them easy to lug around.

"I love to study outside on patios and in cafés," said Ms. Ragusila. "I wanted a Macbook Air, but it was so expensive that with the money I would have paid for it I got a bike, a trip to Cuba and a laptop."

While some netbooks sell for as little as $270, students looking for something with a little more processing power should consider an ultrabook, like an Acer Aspire, which retails for about $500.

"Ultrabooks are a new, powerful, really lightweight laptop with excellent battery life," says Danielle Jang, communications manager at Best Buy Canada. "They're very sleek, they're very thin ... so they're very good for portability if you're on campus and you're moving around."

A smartphone can be a great supplement to a laptop or a notebook, says Kat Singer, a student at the Toronto career college International House.

Ms. Singer uses the sound-recorder function of her iPhone to record bits of lectures, and the calendar to stay on top of her tests and assignments.

"It's much better than having a paper calendar because I keep losing those, and you can't write down an unlimited amount of information," she said.

Ms. Singer also uses the camera on her phone to help with her own personal learning challenges – she snaps pictures of formulas and drawings on the blackboard, instead of writing down the information.

"Some people just can't draw things from the blackboard correctly; even if they try. For me it's formulas; I miss the little squared sign or something."

Smartphones range anywhere from $50 for a Telus Samsung Galaxy Nexus to $649 and up for the newest iPhone.

While tablets have opened up new ways of taking notes and interacting with course material, some students still find it easier to use that classic combination of notepad and pen – partly because they are less prone to distractions like Facebook during lectures.

"The old-fashioned route of a notebook may be hardier and more accessible," said David Vogt, director of digital learning projects at the University of British Columbia.

"I find that if you write everything out by hand, not only are you taking the time to process it, but it involves your muscles, as well," she said. "It's muscle memory. When you're in an exam, you're not typing out your answers."

You can score a set of notebooks and pens at the dollar store for under $10.

You can chip away at your work wherever you go with a USB flash drive – key for students trying to squeeze in more study time between classes, while at work or with family.

"It's always nice to have your work with you and to have a backup," said Ms. Ragusila. "If I have time to kill I can pop off to the library and work for a few hours."

Ms. Ragusila says her flash drive has saved her from some embarrassing mistakes, like realizing there's a typo in an assignment just before it's due to be handed in.

Whiteboards are a great visual aid to map out bigger ideas, and while at $35 they won't break the bank, they can be done on the cheap.

Pippin Lee, a fourth-year economics student at York University, turned it into a DIY project, and says he made his 1.2-by-1.2-metre whiteboard from a piece of polycarbonate plastic from Home Depot which he stuck to the wall with sticky tack.

"It's a big piece of paper that's reusable," said Mr. Lee. "The fact that you can draw and erase immediately is a very powerful tool, especially when you're writing out your ideas."

Mr. Lee, whose studies include a lot of math, uses his whiteboard to solve problems, map out ideas and create to-do lists. He and his housemates also have smaller pieces of polycarbonate plastic stuck up around the house to use as message boards.

When it comes to supplies, students, especially, need to "experiment with their environment," he says.

Laptops, tablets, smartphones and ultrabooks are the top-selling back-to-school items at Best Buy, says spokeswoman Danielle Jang. She advises parents and students to stick to their budget and "look for longevity" when making purchases, keeping in mind the types of supplies they may need down the road in their careers.

Portable gaming devices like the PlayStation Vita and e-book readers like the Kobo or Kindle are popular choices with students who live off-campus and have to commute to class.

Alim Dhanji, a certified financial planner with Assante Financial Management, recommends that parents should take stock of their university student's existing inventory, to avoid spending unnecessarily. "There is no way that your kids have lost or thrown out all of their old supplies," he said. 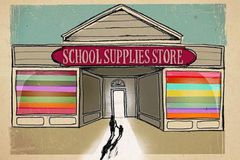