Post-it notes with emojis. Locker magnets that resemble pizza and poop. Pencil boxes featuring T.rex. These are some of the many back-to-school items currently sitting on the shelves of a Wal-Mart store in Toronto.

But Rhonda Johnson, of Unionville, Ont., skipped all of that during a recent visit as she was browsing through the store with her nine-year-old son, Jahziah.

"I am the type of parent who buys something that is going to be functional and serve its purpose," she says. "It's going to be plain. It's not going to be glittery."

Back-to-school supplies, particularly stationery, have changed considerably in recent years, and are now marketed as "fashionable" items. Some feel the items allow kids to express themselves, but others argue that they detract from learning and are a waste of money.

"I do not conform to society's way of dragging you into certain trends," she says.

The 42-year-old buys only unadorned stationery for her son, and it has always been that way for him and his older brother, Dre.

But that hasn't stopped Jahziah from asking for a Pokemon binder or a notebook graced with the Minions from Despicable Me.

"I've said no for so long … [but] he still asks because it's attractive," Ms. Johnson says. "It's marketing."

Meanwhile, some 40 students in a small town in Britain won't be allowed to use fancy gadgets at school, but not because their parents said so.

Ian Goldsworthy, a Grade 6 teacher at a school in Potters Bar, slightly north of London, has banned novelty stationery – erasers in the form of nail polish, that new "it" plastic water bottle, pencil cases almost taller than the child carrying them – from his classroom.

"It was causing too many arguments," he says, noting that his students would flaunt the latest gimmick and wait for others to notice, get distracted when someone pulled out something shiny or sparkly and become obsessed when things went missing.

He says he had enough around Easter of 2016, when he asked his students to empty their desk drawers and put anything that they didn't need for the lesson at hand in their backpacks.

"It wasn't a big revolt," he says. "There was some disappointment, but they were pretty understanding."

They talked about the reason behind his decision as a class.

"It wasn't me just saying from [up] high, 'This is how it's going to be,'" Mr. Goldsworthy says. "They could see the logic of the argument. [They] knew it would help [them] focus."

On the first day of school every year, Mr. Goldsworthy draws up a classroom contract with his students about the rules they think will best support their learning. He'll be adding "only bring in stationery I need" this time.

Not all teachers feel the same way.

Liane Zafiropoulos, who teaches Grade 5 at a school in Ajax, Ont., doesn't have a problem with trendy stationery. She says her students already know the general rule that only items that infringe on their learning will be banned.

"As long as the children are writing and learning, I am happy," she says.

The 40-year-old keeps a treasure box of special stationery in her classroom, which she lets students pick from whenever they exhibit good behaviour.

Ms. Zafiropoulos says children's stationery is an expression of their individuality. "We might as well put them in uniforms if we are going to give them all plain pencils," she says.

But what bothers Ms. Zafiropoulos is that some of her students cannot afford certain back-to-school supplies. "They illustrate how commercialism consumes us," she says. "At the end of the day, it's the corporations who get richer and the families who suffer."

Households in Canada are expected to spend $883 on back-to-school shopping this year, up from $450 last year, according to a recent Angus Reid poll of more than 1,500 Canadians.

David Lewis, an assistant professor of retail management at Ryerson University, says manufacturers are trying to make stationery – what was traditionally a relatively utilitarian and straight-forward type of product – more "hedonistic."

"If you can turn a pencil into a toy, then it creates an entirely new market for existing products," he says, adding that stationery is now "more fun, exciting and pleasurable."

Mr. Lewis also sees interesting parallels between how cereal and stationery are marketed to children these days. He says both products serve different purposes for the purchaser and the influencer. "Parents are looking at nutrition," he says. "Kids are looking at fun," which means cartoon characters and bright food colouring.

It's the same with stationery, where parents are evaluating functions, while kids are concerned with fun and being unique, Mr. Lewis says.

"It makes [my kids] more willing to go back to school," she says. "They complain less."

She also sees it as a way for children to personalize their stuff and show their friends what they like. She recently bought 18 scented markers – which smell like cotton candy, cappuccino, evergreen trees and brick oven – for $10 at a DeSerres art supply store.

If Canadian schools were ever to follow in Mr. Goldsworthy's footsteps, she thinks teachers should consult parents first. It would be kind of a big deal for her children, she says.

Her six-year-old, Aliyah, says she would feel "bad," as would her 10-year-old sister, Veronica.

"I would probably feel disappointed and depressed," says Veronica. "I like seeing my happy and amusing [stationery] in class."

A retired elementary school teacher in London, Ont., can still relate to that feeling.

It's why Debra Rastin discouraged – instead of banned – her students from using pencils with anything at the end, from 2010 to 2015, the last five years of her career. Whether it was trolls with blue hair or soccer balls, she considered them "toys" and too distracting.

But the 63-year-old also remembers what it's like to be 6 and excited about having something new to bring to school.

"Fifty years ago, a pack of pencil crayons was fashion-forward," she says.

Facts & Arguments
Our granddaughter is starting kindergarten, but I’m the one with the back-to-school blues
August 31, 2017 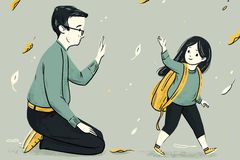 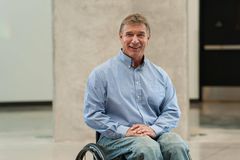 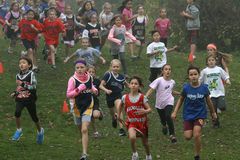