I vividly remember the politics of my school cafeteria. Lines were drawn as to who sat with whom and at which table, and every day, we judged what was inside each other’s lunch boxes.

Two decades ago, bland was better: cold-cut sandwiches, soup from a can or a pack of Lunchables were benign and therefore acceptable. Most of the foods that I love – curries with aromatic spices, slow-cooked pork hocks, or Chinese sausage with rice – were deemed, well, gross.

But with every passing year, the country is becoming more culturally diverse, bringing the lunchbox along with it. Canada welcomed more than 250,000 immigrants in 2009, compared to just under 190,000 a decade before. In Toronto, 51 per cent of the city’s 2.7 million residents were born in another country, and newcomers settle everywhere from the prairies to the Maritimes. The 2011 census reported more than 200 different languages spoken at home.

Whereas Wonder Bread once ruled, today’s lunchrooms are filled with kids eating sushi, dumplings and ratatouille. Some of the menus are driven by parents, who want cafeteria fare that helps their kids connect with their culinary roots. “We’ve seen a real demand for special menus,” says Saira Husain of Compass Canada, the parent company for Chartwells food service.

The company operates in more than 700 schools across the country, serving students from kindergarten to Grade 12. Halal and vegetarian meals are among their regular options. “[We] ensure a wide range of healthy options are available,” Husain says, “and address the needs for ethnic diversity.” 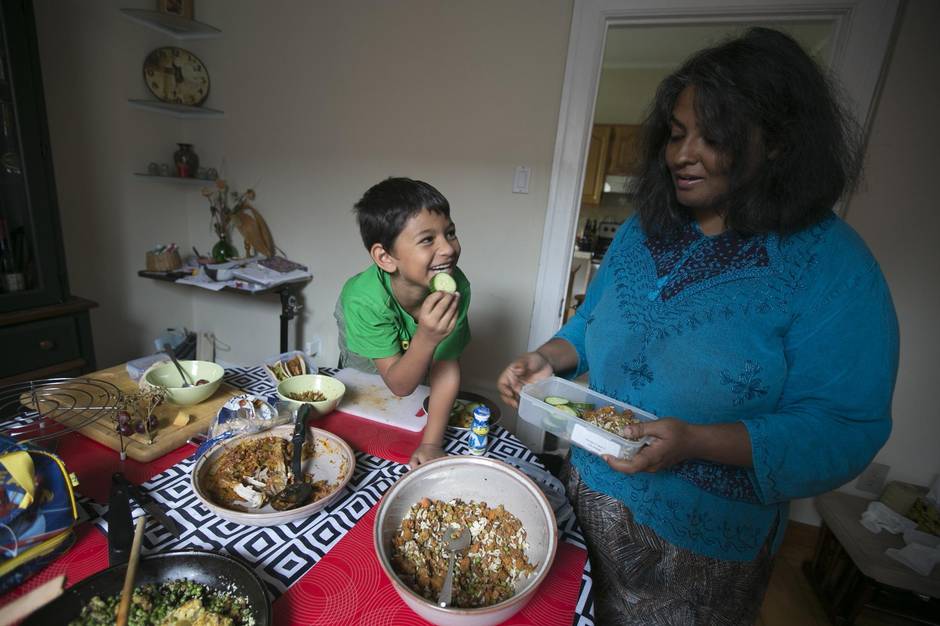 Seven-year-old Naveen sneaks a cucumber as his mom, Sumitra Rajagopalan, prepares lunches in their home in Montreal. (Christinne Muschi for The Globe and Mail)

Just as often, the drive for a worldly midday meal comes directly from cosmopolitan children themselves – some kids seem to see lunchtime as a global buffet.

“My kids love Egyptian food, but sometimes they’ll see kids eat other foods like sushi and they’ll ask me for it,” says Abeer Ayoub, an Egyptian-born mom raising her Canadian-born son, Youssef Hayawan, 10, and daughter, Nada, 13, in Oakville, Ont. “Back home in Egypt, we were all of the same background, but here you have kids of different nationalities so everyone learns from each other about their cultures.”

On occasion, Ayoub’s husband sends the kids to school with mahalabiya, a creamy Egyptian milk custard. “My daughter’s friends – one’s from Pakistan, another from Korea and another who’s born here – would ask for it, so we always make extra,” Ayoub says. “When the Korean girl packs sushi, she also brings enough for everyone.” (Sushi is very popular – Vancouver mom Andrea Niosi told me on Twitter that her Irish-Italian-Newfoundlander daughter “insists on Japanese” for her lunches.)

Multicultural variety may help convince children to eat the lunches that parents worry over. Olivia Dam is a 35-year-old youth co-ordinator in Calgary and moved to Alberta from Ho Chi Minh City, Vietnam, with her family in 1986. Her three-year-old daughter, Katelyn, gets everything from wrap sandwiches and yogurt cups to meat- and vegetable-filled dumplings to vermicelli in her lunchbox. “When you’re used to eating the same thing over and over again, you don’t want to try other things,” says Dam, who peruses Pinterest for lunch ideas.

“It was always rice, rice and rice,” she recalls of the lunches her parents packed for her. “I remember trading with my friends … because I thought sandwiches were cool. Soups and sandwiches were the norm and you were a bit of an outcast if you didn’t eat that.”

Karen Le Billon is a Vancouver-based mom and author of French Kids Eat Everything and Getting to Yum, guides for parents of picky kids. She says that it’s vital to expose young palates to many different flavours: A baby can taste something a dozen times before deciding to like it. 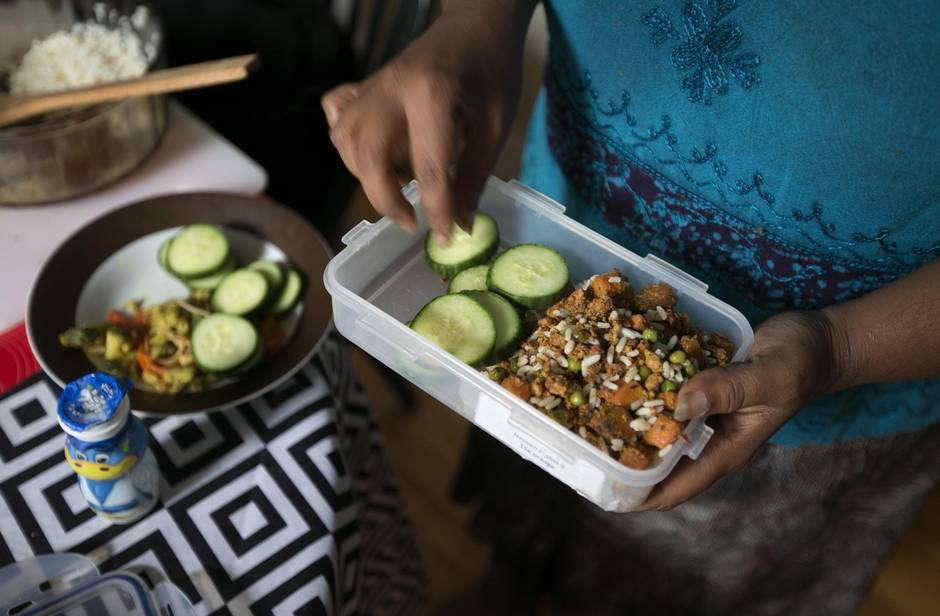 Sumitra Rajagopalan prepares lunches such as kheema mattar. (Christinne Muschi for The Globe and Mail)

In 2009, she and her family spent a year in her husband’s hometown of Pléneuf-Val-André in northern France. Her seven-year-old, Sophie, and 11-year-old, Claire, went from only eating oatmeal and Cheerios to loving Roquefort, fish and mussels. Now she packs them stews of ground beef, celery, cabbage and potatoes, or ratatouille packed in a Thermos. “None of the other kids say ‘ew’ or ‘yuck’ at school because there’s so much variety in the classroom,” Le Billon says.

“My husband is a historian on the reserve, so we work a lot on pulling that historical knowledge and bringing it back to show how central food is to Haudenosaunee culture,” says Maracle, a mother of four and co-founder of the school’s nutrition program “Some kids weren’t used to eating traditional foods in the beginning, but it didn’t take long for them to get used to it. They love the corn mash, the venison broth.”

Maracle, 43, also packs lunch for her 10-year-old daughter who goes to school off the reserve. “It’s not all Haudenosaunee food,” she says. “Once in a while I’ll make a quinoa salad, an egg salad,or just a sandwich like any other busy parent.”

Sumitra Rajagopalan, 39, is the CEO of Bioastra Technologies in Montreal. It’s important to her that her seven-year-old son, Naveen, eats as many different foods as he can. “Once a week at dinner we sit down to a full Indian thali [a platter of various meats, vegetables, rice and breads],” Rajagopalan says. She is originally from southern India, moved to Saint Petersburg for university and married a Swiss man before arriving in Canada in 1999. “Each region of India has their own version, and it’s one of the best geography lessons I can give to my son.”

Naveen once told Rajagopalan that a Lebanese classmate was subjected to rude remarks from other kids for eating stuffed grape leaves. “It’s a fine line,” she says. “You want to transmit your culture to your kid, but at the same time you don’t want him to stand out and be the object of snide comments.”

Rajagopolan makes sure to incorporate Indian, Russian and Swiss cooking into Naveen’s lunch. On any given day he might take Russian pelmeni dumplings with sour cream; chebureki, a Georgian meat-filled pastry; pitas filled with leftover curry; or pizzas topped with Indian-spiced meat and roasted vegetables. Swiss cheese and fruit are a regular snack.

“Culture includes music and language, but food is such an everyday important thing,” Rajagopalan says. “I’m quite happy that, through the humble lunchbox, he’s exposed to three or four different cultures.” 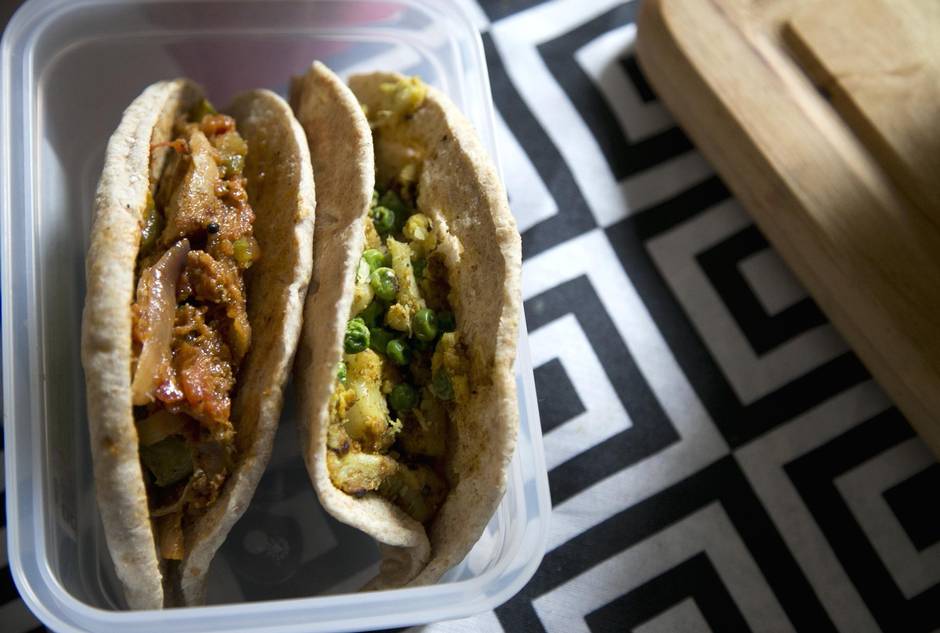 Another lunch from Sumitra Rajagopalan: Pitas stuffed with chicken korma.(Christinne Muschi for The Globe and Mail)

A week of multicultural lunches

Here are five days worth of lunchbox fare from Montreal mom Sumitra Rajagopalan. 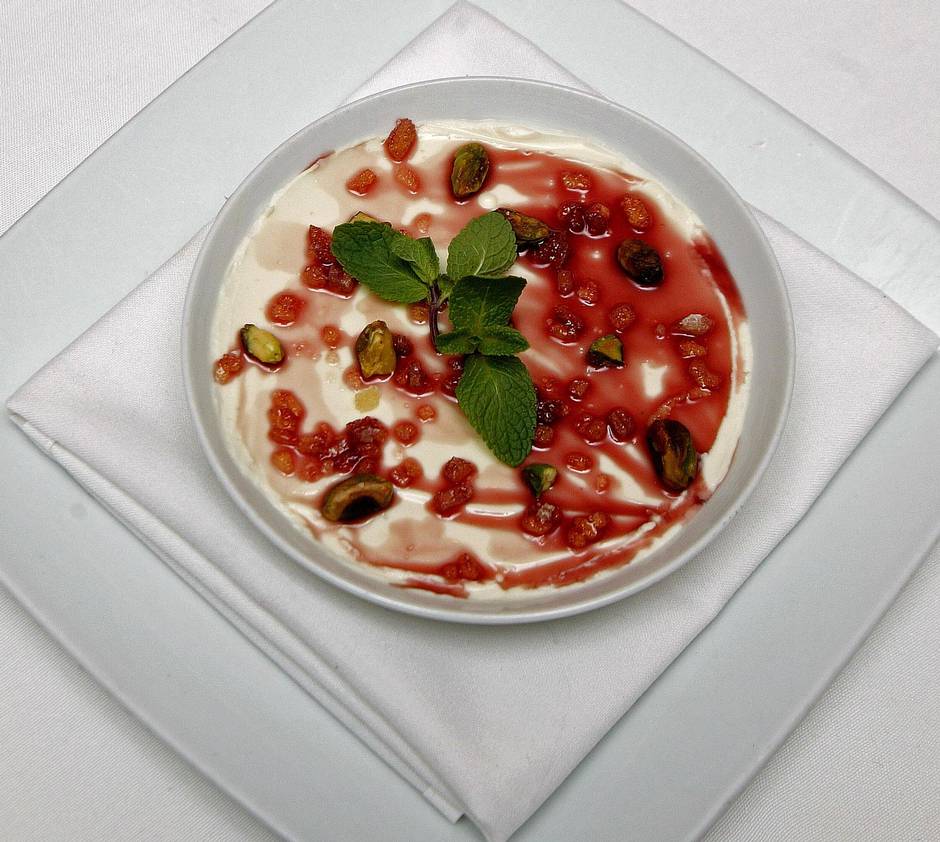 Combine all ingredients (except toppings) in a small pot and whisk until the cornstarch has dissolved. Bring to a boil over medium-low heat. Reduce heat to low and simmer for about five minutes until the mixture slightly thickens, enough to coat the back of a spoon.

Pour the mixture in containers and let cool completely. Sprinkle with desired toppings. Cover with plastic wrap and store in the fridge until ready to serve.