I still feel a swell of excitement when I reminisce about Mom ushering me onto the bus each August when I was a little boy. This wasn't a typical shopping trip downtown. This was something special.

I wasn't in a state of euphoria because of the promise of a new velour shirt or corduroy pants - both brown, of course. It wasn't about buying a baseball glove. Or new music. No, it was all about our final destination.

To be honest, there wasn't a whole lot to do growing up in a small town like Sarnia, Ont. To a provincial boy of limited means but seemingly unlimited imagination, the school supplies store was the place. An amusement park popping with paper. A magical midway of multicoloured markers. A freaky funhouse of full-size folders.

Mom instilled a sense of independence in her young brood. She would let me, my older brother Carlo and little sister Paula wander through what felt like an endless bazaar of academic tchotchkes.

But aimless I was not. Even at the ripe old age of 9, I had all the telltale signs of a Type A personality. I didn't carry around an Alex P. Keaton briefcase. I didn't have a written to-do list. But I did have a mental one.

Buying school supplies was serious business. And being one of seven kids made their purchase even more important - there wasn't a penny to be wasted. Choices needed to be made. The right ones. And testing the merchandise was the only way to go.

Mastering cursive writing in Mrs. Tonelli's Grade 4 class necessitated smooth ink flow. Little did I know that what seemed like a year-defining issue, weighing the pros and cons of fine v. medium-tipped pens like a pint-sized Plato, was just the beginning. There would be an endless array of increasingly bewildering decisions involving academia. And, of course, the tortuous journey to adulthood.

To the adult eye, the school supplies store was just another cathedral of crazed cardboard consumerism, less to be savoured than survived. But to the whimsical nature of a pre-pubescent boy, it represented something infinitely more significant.

Pushing open its mammoth creaky doors and breathing in its mixture of ink, erasers and books invoked an intoxicating spell whispering promises that would magically come to fruition upon my return to school. The wonder of discovery. The camaraderie of friends. And the butterflies of expectation.

Today, as an adult who has earned degrees in Canada and England and has enrolled once more in Teachers College at Columbia University, the idea of buying school supplies and the reality of revisiting full-time studies represents something even more profound. Only after the remove provided by graduating to professional life did the greater importance of travelling to a school supplies store and puzzling over pens and paper reveal itself.

My Peter Pan-like existence, the slow-building pressure of adulthood punctuated by recurring respites in university, feels like a form of resistance to the conventional narrative associated with the working world. Professional environments have a tendency to value us solely based on our ability to produce. And those who produce the most, at the fastest rate and to the highest quality, are the most valuable. Unfortunately, the rest of the traits we have spent a lifetime developing to become well-rounded human beings are oftentimes deemed irrelevant.

During post-secondary studies, in this veritable Shangri-la on the precipice of adulthood, people are viewed more holistically and given a number of opportunities to display their full bloom. Being inspired in an oak-panelled lecture hall, reading a musty old book or coming to terms with a novel idea is bewitching to a person like me who is motivated more by personal development than by comfort. But this is only the backdrop.

Returning to study spirits me away from some of the more wearying demands of daily existence. I venture out once again toward uncharted land. I open my eyes to the fertile, untouched soil of an academic discipline I am about to break for the first time, among people I don't know, within a city, state and country where I have never lived.

It provides all the tools necessary to interweave the frayed cloth of lessons learned, but regretfully ignored, and seamlessly fashion my identity into a new kind of fabric that is richer and more detailed than before.

No longer am I simply the athletic son or dutiful nephew. I am neither the earnest high-school student nor the socially awkward outsider. The freedom afforded by this radical change of scenery, a place that is welcoming because it is the site of a perpetual convergence of new souls also seeking acceptance, provides me with carte blanche.

I am a daydreaming author shifting my wondering eyes away from the heavens and toward the blank first page of the greatest story I will ever write. My own. And maybe, just maybe, if I exercise sufficient care, am daring in my exploits and finally capable of marshaling every ounce of my conviction, perhaps this is the year I will become the person I always wished to become. A new world of possibilities awaits. What could be better?

Dino Sossi is a Canadian living in New York.

How to set up a homework space for your kids
September 5, 2010 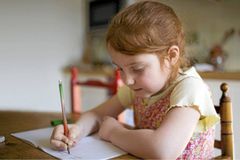