The Freshman 15. It's the friend no one wants to make at university.

As a recent graduate and master student "in transition," I can speak personally to the chaos and confusion of university life. With it, comes a constant struggle with managing one's weight while balancing a healthy lifestyle. I did not arrive at university as The Sporty Type, The Skinny Girl or The Health Nut. I was The Keener, trying to do every extracurricular and social activity this new independence offered, while maintaining a high GPA.

The habits and knowledge I've gained along the way have not been without difficulty. Maintaining a happy and healthy lifestyle has required immense effort, consistency and devotion throughout my years from freshman to graduate student. Many people will only learn these lessons first-hand, but in the hopes of making the journey a little less painful for the class of 2017, here are some dos and don'ts I picked up along the way:

Don't eat bags of candy to stay awake. I once ate a rather large bag of bulk candies while I was studying for an exam in media law. An admittedly dry subject, yet nonetheless everything in that textbook became outrageously funny, to the point that I was on the ground laughing, clenching my stomach with tears running down my face.

Do eat healthy snacks while studying! I eventually learned to keep snacks like trail mix and carrots and hummus in the house during my exams, rather than bags of sugar products. My study session was much less eventful, but much more productive.

Don't drink too much coffee. I went into several exams in my first years where my hands were literally shaking from being so loaded on caffeine. At one point, I got light-headed and nearly fainted in the middle of the university gymnasium. Conclusion: one cup of coffee a day is more than sufficient.

Do find ways to make eating fruits and veggies enjoyable! I opted for a community-supported agriculture share from a local farmer in my third year, and would recommend it to everyone. I got a weekly bushel of exotic veggies – kohlrabi and Jerusalem artichokes are two such examples (both of which are so delicious!) – bought a new cookbook, and learned how to use them to make scrumptious lunches and dinners. Kale chips, anyone?

Don't go to the gym after January resolutions, and disappear a few weeks later. I remember exercise hitting the back burner in my first year. I was okay for a few months, but soon, I was so out of shape that walking up the stairs became an extreme sport.

Do schedule exercise into your personal agenda. Make exercise something consistent by creating reminders on your smartphone, laptop, iPad or Post-it notes. Most universities provide free gym memberships to their students, so take advantage of it. If you're aiming to work out in the morning but have difficulty motivating yourself, a bizarre but useful tip I received from a friend was to sleep in workout clothes the night before, and then wake up and give 'er. Works every time.

The most important lesson I've learned is to respect myself. That includes everything from eating food from the ground rather than from a factory, keeping myself in good physical shape, and working on stress-management techniques such as yoga, deep breathing and prayer to keep my mind in a positive and stress-free state. What each person does to maintain their "optimum" state will be different – find what works best for you and the Freshman 15 will melt away.

Rachel Gardner is a master of journalism student at Carleton University on deferral. She has trouble finishing anything except that big bag of candy in her first year. 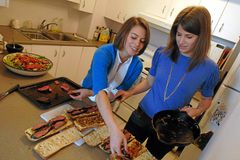 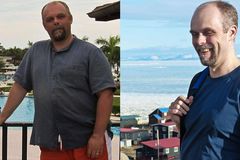