For 11 years, Julie Lalonde had no choice but to carry a moss-green “evidence folder” with her every time she moved. Inside it, the disturbing artifacts of an ex who had been stalking her relentlessly for more than a decade: menacing handwritten notes, sexually explicit e-mails and photographs.

“I will always love you, you have no choice,” read one message illustrated with a heart and scrawled on cardboard in ballpoint pen. The ex left it at Lalonde’s new apartment to let her know he was still watching her.

The two, who had once been best friends, began dating at 17; the sexually and psychologically abusive relationship escalated after Lalonde broke up with the man at age 20.

For years as he trailed her, Lalonde kept that growing folder for the times she had to call police. The ex’s last threatening note came four days before he died in a car accident this summer.

Today, as manager of Draw-the-line.ca, a by-stander intervention campaign aimed at curbing sexual violence, Lalonde speaks frankly with Canadian students from Grade 6 through university about unsafe and abusive relationships. She wishes someone had taught her abuser that when someone breaks up with you, “they don’t owe you anything.” 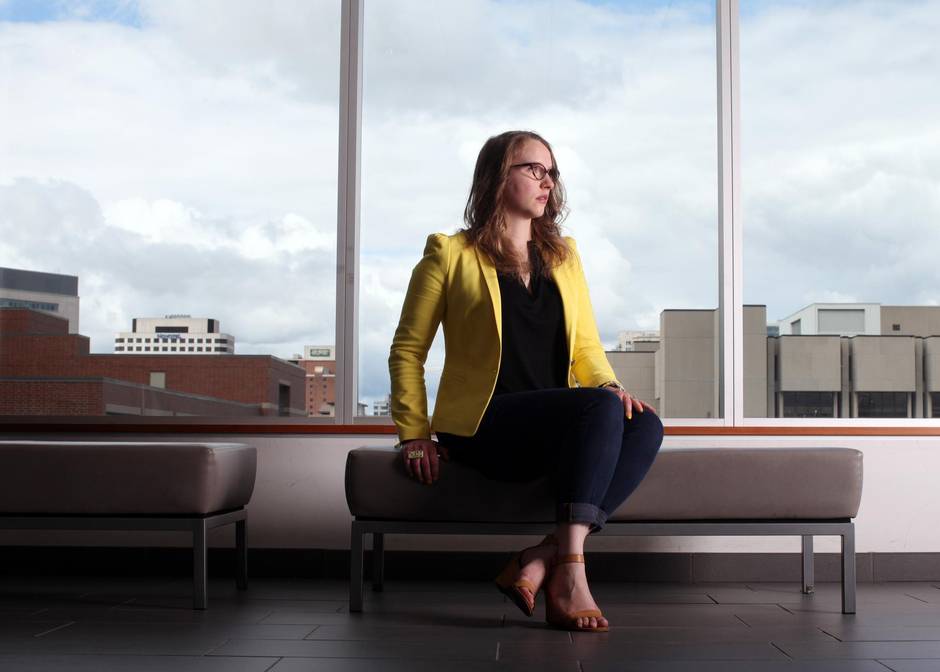 Julie Lalonde, who was stalked by an ex-boyfriend, believes it’s important that Ontario’s new sex-ed curriculum will delve into what it means to be a respectful ex. (Dave Chan for the Globe and Mail)

“If everyone around him was giving him that message, I might not have endured 13 years of abuse,” Lalonde, now 30, said from Ottawa.

She is hopeful that Ontario’s new sex-ed curriculum will do what no one did for her in school. To be rolled out in the province this fall, the lessons will include, in Grade 5, what healthy relationships actually look like.

Building confidence for those relationships will come in Grade 6, then consent in Grades 7 and 8. By Grade 9, students will know who to turn to if they or their friends are experiencing abuse. They’ll review red flags, such as jealousy, isolation, intensive pressure and constant monitoring via text, e-mail or social media. And in Grade 10, students will learn about being an ethical ex: be respectful and don’t spread lies – or your former partner’s nude selfies – online.

“Grade 5 is when people start having crushes and wanting to date. Showing them … the signs of something unhealthy is really important,” Lalonde says. “You can’t hear it enough.”

As students prepare to go back to school next week, tensions have flared again around Ontario’s revamped sex-ed curriculum. On Monday, Premier Kathleen Wynne’s government released a television ad to quell fears. The ad shows teens in various troubling scenarios, including a girl who hesitates when someone texts her asking for a photograph of her breasts, and another girl who pauses as a boy guides her to a room at a house party. “Our kids have questions,” a voice explained, before promising that the updated curriculum would keep kids safe.

As far as abusive relationships are concerned, experts are united: the sooner the better for lessons like these.

“Students in high school are often having their first romantic relationships. They’re setting the script for their future relationships. They’ve got limited experience. We can empower them with more options by talking in a safe classroom situation,” says Kristen Gilbert, who teaches students from kindergarten to Grade 12 in British Columbia as director of education at Options for Sexual Health.

“Whereas it’s really interesting to stand in front of a first-year university group and talk to them about sexual harassment, it’s not as effective. At that point, people have calcified their perspective. It’s harder to change behaviours once they’ve been using those for the last six or seven years,” Gilbert says.

Since 2006 in British Columbia, students have been coached on interpersonal skills starting in Grade 4. By Grade 5, they’re asked to reflect on their own behaviours; in Grade 7 they learn about empathy and the risks of sexting. By Grade 9, B.C. teens discuss warning signs of abuse, such as a partner who constantly criticizes them or limits time apart.

“If you’ve already experienced warning signs, you need to know that you need extra support when you leave,” said Anuradha Dugal, director of violence prevention programs at the Canadian Women’s Foundation. “You’re leaving somebody who is probably going to try and assassinate your character, who is going to be extremely focused on the fact that they’ve been abandoned or, in their mind, betrayed.” 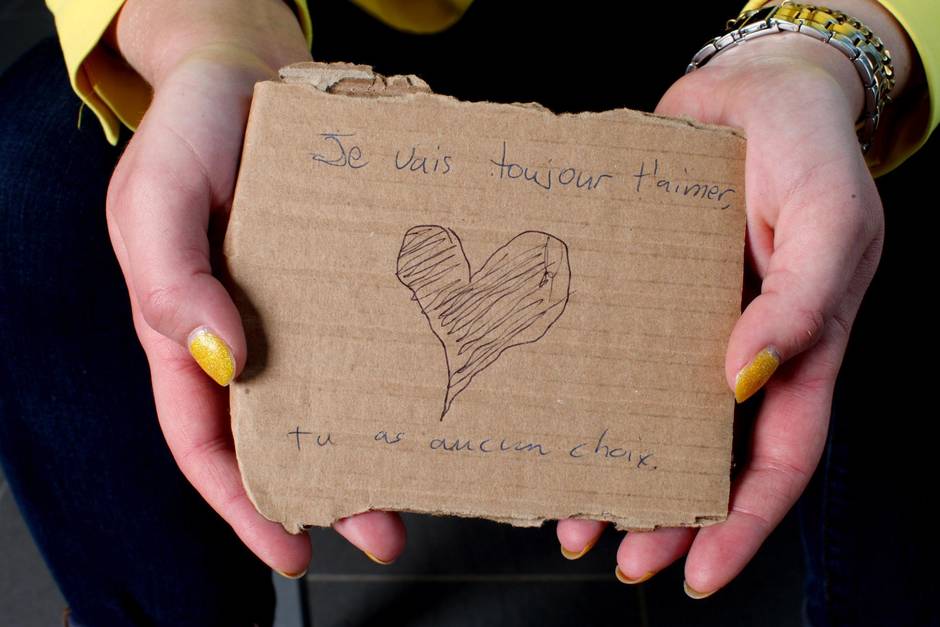 In a note he left at her new apartment, Julie Lalonde’s ex-boyfriend warned her, ‘I will always love you, you have no choice.’ (Dave Chan for The Globe and Mail)

Technology is now a substantive part of the discussion. The last time Ontario saw an update to its sex-ed curricula (1998 for elementary schools and 1999 for high schools), the perils of tech weren’t even on the radar. Now, we know it exacerbates abusive behaviour: reputation-ruining on social media and blackmail through the dissemination of intimate photos.

Problematically, some toxic behaviours can scan as flattering attention to a teenager, such as non-stop checking-in via text or attentively keeping tabs on a Facebook feed. A phone buzzing constantly can be mistaken for being loved.

“It’s really hard to tell if somebody’s just being normal jealous – if they care about you – or if they’re being creepy. They don’t have possession over you but young girls particularly don’t seem to catch on to that. They think it’s just flirty or that it’s normal behaviour,” said Lia Valente, the 14-year-old Toronto co-founder of the “We Give Consent” movement, which pushed for the inclusion of affirmative consent in Ontario’s new curriculum.

Valente and her friend Luca Soldovieri, who is also 14, said “power imbalances” between girls and boys plagued many of the relationships they witnessed at their Toronto middle school last semester. Soldovieri recalled girlfriends who had exchanged nude selfies with boyfriends and were afraid of what would happen after the fact. “If one person had personal pictures of another person, they don’t want to make them mad. You want to do what they want,” Soldovieri said. “It shows that there wasn’t really trust in the relationship.”

For girls and boys with a strong sense of their own identity, it’s easier to see when behaviour crosses personal boundaries. But for the many who’ve never had an opportunity to think through these issues, schools have a responsibility to step up and help build confidence early, Dugal says. She desperately wants young women to start considering “what makes me happy” versus “what’s going to make the other person happy” – to “know where those lines are, internally.”

Crucially, the curriculum goes further than building young women up with lessons in confidence and tips on leaving safely. Instead of focusing solely on victims’ behaviour, there is also that Grade 10 discussion about what it means to be a respectful ex – someone you might want to be friends with one day. With this, Lalonde says the dialogue shifts powerfully away from victim blaming and the “why didn’t she leave” narrative.

“It’s teaching the person who has been left that they have a responsibility to respect boundaries. Someone didn’t want to be with you? You need to accept that,” said Lalonde, who will be burning that evidence folder at a friend’s cottage this weekend.

Starting in Grade 9 this year, students in Ontario will discuss the logistics of safely leaving abusive relationships: “If you think that you are in an unhealthy relationship, you should talk to a trusted adult,” reads the new sex-ed curriculum. “Tell them why you think the relationship is unhealthy and exactly what the other person has done. This trusted adult can help you talk to your parent or guardian, an elder, a counsellor, school authorities, or even the police.”

Knowing ahead of time who might support you is crucial to breaking away safely: the time a woman leaves an abusive partner is often the most dangerous because abusers will escalate when they feel they’ve lost control over a situation, according to the Canadian Women’s Foundation.

Julie Lalonde, who counsels students in Grade 6 and up on abusive relationships, offers some questions kids should be prepared to think about beforehand:

-Are you breaking up with them in person?
-Are you doing it in public?
-Do you have other people around?

“Those things matter when you’re leaving a relationship where you’re concerned about your safety,” Lalonde says.

For teenagers feeling pressured by a partner into doing things they don’t want to do, Lalonde emphasizes setting boundaries and contemplating the social fallout, which is important to teens: “I talk about what it would mean if you don’t send this guy a picture, or hook up. If you don’t want to go out with him any more, what do you think his reaction will be?”

This, she says, allows them to flesh out what the next week or two of their lives look like. “They need to be empowered to make those decisions themselves.”

Researchers have found that young victims of dating violence suffer from poor self-worth and anxiety later in life and that early experiences with dating aggression can spell a trajectory for marital violence later on.

Women from the ages of 15 to 24 are killed at nearly three times the rate for all female victims of domestic homicide, according to the Canadian Women’s Foundation.

Experts say the earlier the intervention in schools, the greater the dividends. A 2006 meta-analysis of violence prevention strategies from Grand Valley State University in Michigan found that intervention in elementary and high schools can shift attitudes long-term. Among the findings: