Signs this wasn't your ordinary high-school convocation were everywhere. Like the babies being cuddled in the arms of more than a few of the young women who were crossing the stage at John Oliver High School in Vancouver in their black cap and gowns.

Some of the shout-outs from the audience were different too.

And then there were the valedictory speeches.

"It took me 10 years to finish this part of my school," said Sarah Cori Johnson, 25, one of six valedictorians to speak at the Vancouver School Board's recent Adult Education Convocation.

"I want to thank my husband, my children and especially my mother …"

She stopped and started to cry.

"… who stuck by me … and never stopped believing in me … even during those years after leaving high school in Grade 10 when things weren't so wonderful. Somehow, thanks doesn't seem enough."

Jonathan Turner, another valedictorian, was finishing high school at age 29. He would be attending the University of B.C. in the fall, hoping to pursue his dream of becoming a doctor. Valerie Ferrar, also a valedictorian, had spent the last 25 years working on her diploma. She had failed some courses three times. She refused to give up. Now here she was, a soon-to-be grandmother, crossing a stage she wasn't ready to walk across when she was teenager.

"This high-school certificate is my gift to you, mom," the 42-year-old said to loud cheers from the crowd. "Now together we can close this chapter in our lives and start a new one."

I'd been to a few high-school graduations in my day but nothing quite like this one. Sure, there were speeches by officials from the local school board and teachers' association typical of these sorts of affairs. But there was an emotional undercurrent much more profound than anything you experience at your standard high-school grad.

The tears that fell didn't just pour down the cheeks of those who were finally graduating. They also ran down the faces of teachers and outreach workers and principals who knew the back stories of these grads, the long odds they'd overcome, the adversity they faced, the hopes they had.

Vancouver has one of the largest adult education programs in the country. More than 7,000 students were enrolled this year, some full-time, most not. This year, there were about 400 graduates. Students ranged in age from 16 (kids who drop out of regular high schools) to more than 80. They included a grandmother who graduated from the program with her granddaughter, said John Crowe, district principal for adult education.

There is often a direct correlation between the economic times and adult education numbers. And right now, with the economy in the tank, enrolment is booming.

The program graduates students from six different schools (thus the six valedictorians) and attracts people of all backgrounds who left high school before graduation for a million different reasons. There is no typical adult education student no more than there is a typical Canadian or American. Some are students for whom mainstream high schools didn't work, others are adults who are honouring commitments they made to themselves and others years earlier.

Justin Tolentino is one of those for whom the regular high-school setting didn't seem designed. He was kicked out of 10 different high schools in Greater Vancouver before dropping out entirely. He didn't relate to teachers. Didn't relate to the courses. He wanted to make money.

So he became a petty criminal.

He sold drugs, stole things and became a graffiti artist. At 17, he decided to give school another try. He signed up with the adult education work-from-home program. That didn't work too well. He'd be home with books on one side of his desk and a bag of pot on the other. The pot always won.

So he decided to enroll in the Fresh Start program, which is operated out of a classroom but with more flexible hours. One day the police showed up and arrested Justin for his graffiti habits - plucked him out of class and threw him in handcuffs, right in front of his teachers and fellow classmates.

"That was it for me," Mr. Tolentino, now 20, said the other day. "That's when I realized I had to change. It was time to get on with my life. And the teachers and staff at Hastings [the school he attends]stood by me and didn't judge me and gave me another chance. And that was the key. They gave me another chance."

When he graduated this year he was named class valedictorian.

Dana Alvaro, an outreach worker at Hastings Education Centre, said the key to the success of Vancouver's adult education program is appreciating and understanding the varied background and life experiences of those who come knocking on its door.

"We have had victims of torture from Pinochet's Chile," said Ms. Alvaro. "Young people who grew up in refugee camps in Africa. People with substance abuse issues, single parents struggling with poverty, young offenders on probation, architects, engineers and professors who are new to Canada and have to start again.

"We've had residential school survivors, students with undiagnosed learning disabilities. Our student population is diverse to the extreme. But there it is, it works. Those diplomas represent their hard work and proof that, when given the opportunity, they can succeed."

Graham Arthur is principal at the program's Main Street Education Centre. He is retiring this year after eight years in the adult education program after spending 26 years at a mainstream high school.

"There is a complete mind shift in this program," Mr. Arthur explained the other day. "And there has to be. When students go to regular high school they are told what to do. When they come to us we ask them: what do you want to do?"

"For some that means starting at 10 in the morning or later. We're open until 9 at night. It's all about flexibility and it has to be that way if you're going to have success. But it's so rewarding. You can't even begin to compare the difference between this and regular high school. For me it's been …."

Mr. Arthur's voice trails off. He begins to cry.

"I'm sorry. But this is hard. Saying goodbye to this, to the teachers and staff who work so hard to help these people, well, it's been an amazing, amazing experience. It's one of the great untold success stories in our education system."

Justin Tolentino is looking for a job. He is considering a career in the Armed Forces. But life is good right now. He is in a relationship. He has good friends. His parents, Errol and Stefanie, watched as their son received the high-school diploma they doubted he'd ever get.

"I owe everything to this program," he said the other day on the phone. "It gave me the second chance I needed to get the new beginning I'm getting. And it's given thousands of other people the same thing too." 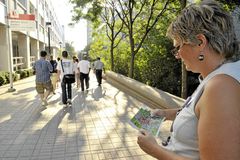 Follow Gary Mason on Twitter @garymasonglobe
Report an error
Due to technical reasons, we have temporarily removed commenting from our articles. We hope to have this fixed soon. Thank you for your patience. If you are looking to give feedback on our new site, please send it along to feedback@globeandmail.com. If you want to write a letter to the editor, please forward to letters@globeandmail.com.
Comments