If you’ll allow me to mangle an old proverb: Give a university student a meal plan, and she’ll eat Pizza Hut for a year. Teach a grade-school student to cook, and the government will be less likely to have to pay for her eventual heart disease. Okay, it doesn’t rhyme. But the folksy wisdom of saving on health care by spending on education is now and will always be true.

First, let me give you some great news. Mortality rates from cardiovascular diseases have never been lower. Over the second half of the 20th century, heart disease and stroke went from representing half of the deaths in Canada to a quarter, thanks largely to the decline of smoking, plus advances in medicine.

The bad news is, we’re not preventing these illnesses, merely living with them. And it’s expensive. Canada spends $20-billion a year (that’s the budget of 100 Transformers movies) in medical costs for cardiovascular disease. Here’s some more bad news: 26 per cent of Canadian children are overweight and 8 per cent are obese.

Poor diet is one of the biggest factors for these diseases. And one of the reasons we eat so badly is because no one taught us to cook. When it comes to food education, we’re a country of bozos. And unless we teach them better, our kids will grow up to be unhealthy bozos, too. “We’re seeing the kinds of strokes and heart disease in teenagers now that we might see in an older person,” says Dr. Patrice Lindsay of the Heart and Stroke Foundation.

With 13 provinces and territories, each one with its own collection of school boards and their own separate curriculums, it’s hard to be definitive about education on a national scale. But I reached out to New Brunswick, Saskatchewan, Alberta and British Columbia, and the overall message from the ministries of education is that Canadian students learn “active living, positive health habits, body image and nutrition.”

They just don’t learn how to cook. 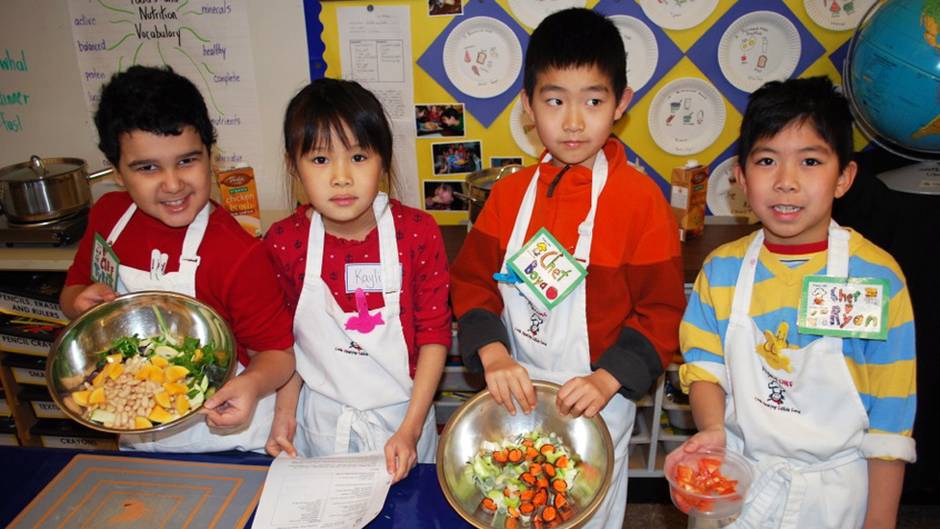 While there are food-education programs across Canada, such as B.C.'s Project CHEF, these are not available to all students in any province. (Laura Clancy/Courtesy Project Chef)

Yes, there are wonderful food-education programs across Canada. In B.C., former elementary-school teacher Barb Finley runs Project CHEF, travelling school to school with a kitchen station to teach a one-week immersion program to children from kindergarten to Grade 7.

In Ontario, former catering chef Keith Hoare trains teenage students at Thistletown Collegiate Institute to cook, maintain an 8,000-square-foot garden and run the school’s cafeteria. And in Calgary, students at Bishop McNally High School work their way through a host of cooking courses, thanks to chef Justin McCallum, who pitched the program to the school district.

However, these wonderful, inspiring programs are all outliers, initiated by outstanding teachers going above and beyond what is required. They are not programs available to all students in any province. In the Toronto District School Board, for example, only 25 out of 100 secondary schools have some type of dedicated food program.

I thought the issues would be safety worries: sharp knives, hot stoves, food poisoning and allergies. I was ready to argue that there is no greater physical risk in a kitchen than on a baseball field, and that allergy risks are everywhere (and already taken into consideration by cafeterias). But apparently the biggest obstacle to the idea of teaching cooking in public school is that educators have their hands full focusing on scores in literacy and math, preparing students for postsecondary education.

“That’s the biggest fight I fight every single day with parents, who think that this isn’t going to give their kids any advantage in university,” says Bernadette Shaw, central co-ordinating principal for the TDSB. But you can’t research ingredients without English, fulfill a shopping list without math or learn baking without chemistry. “A good teacher is going to teach literacy and numeracy across the curriculum, in food programs,” Shaw says.

Maybe you believe that food education is best done at home, like sex education. Well, like sex ed, it might not happen until we make it happen. I was a student at the time when panic over AIDS forced public schools to get very serious, very quickly, about sex ed. I wouldn’t recommend waiting to teach something until we feel the need to scare children to death in order to avoid an epidemic.

Besides, for too many people, eating out is easier than eating in. Even though cooking your own food is faster and cheaper, the idea of planning and shopping for a week’s worth of nutritious meals at home, and maybe eating out occasionally as a luxury, is anathema to many people.

According to the 2015 Canadian Chain Restaurant Industry Review (not exactly the Canadian Medical Association Journal, so take this stat with appropriate skepticism), the average millennial eats out 235 times a year. So many adults that I know, people with fancy degrees who can design video games, run political campaigns and parallel park, wouldn’t know what to do with a head of cabbage but to let it rot in the crisper.

Meanwhile the food industry has pounced on our ignorance by selling us fast, sugar-loaded solutions to our hunger and busy schedules. Sure, you could make yourself a salad. It’s just lettuce, dressed with a little oil and vinegar. But where are you going to get lettuce at this hour? Does Starbucks sell olive oil? Wait, I just checked UberEats and we can have a panini, curry chicken roti, bibimbap, Thai green curry or Greek salad (covered with chicken, feta and creamy tzatziki, which is what you really want) here in six minutes. And that’s just the Monday menu. The company told me they don’t bother including salads toward Friday, when data tells them that customers reward themselves with fried-chicken sandwiches for a hard week’s work.

I can empathize. Until I learned to drive, at the age of 38, I wouldn’t have considered going anywhere beyond public transit, because I lacked a basic ability. And I believe that without the physical aspect of cooking, no child is going to care about nutrition or meal planning. It would be like spending a term learning the rules, science and history of baseball, but never going out to the diamond with a bat, ball and glove.

The thing is, kids love learning to cook. As a food writer, I’ve made spaghetti and tomato sauce with teens in a library; salads and stir-fries with 11-year-olds in a public school; kebabs, hummus and tzatziki with nine-year-olds in a women’s shelter; broccoli, Brussels sprouts and kale with five-year-olds at my home.

At one junior high, we used an old home-economics classroom. The orange countertops were covered in dust, since home economics was decommissioned by Ontario’s government in the 1990s (curious, isn’t it, that Lindsay says people in their 40s and 50s are the fastest-growing population of stroke?). 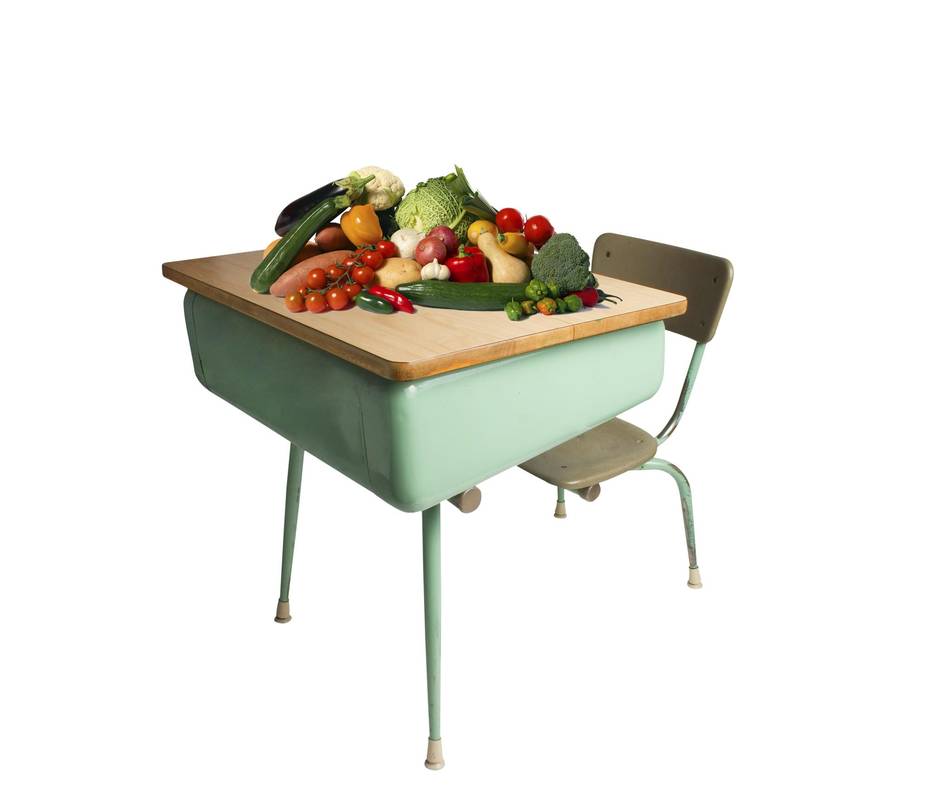 But the sinks, fridges and stoves still worked, and there was plenty of counter space. Students were given everything from lettuce, onions and tomatoes to sunflower and pumpkin seeds, some oils, vinegars and herbs, stuff like fish sauce, tofu, ground pork and noodles and, yes, green vegetables, including baby bok choy and broccoli, and told to make whatever they wanted.

The students began by questioning the ingredients. Many of them had never seen a piece of Parmesan and only recognized it from the illustration on a package of powdered cheese. Beyond safety supervision, I let the kids be creative and make “mistakes,” their taste being the only important judgment. They always took to the kitchen faster than Vin Diesel says yes to a Fast & Furious sequel.

Every time, when they got their hands dirty making it, children ate and began developing a taste for real food. More rigorous research bears this out, such as a 2012 Cambridge University survey of Grade 5 students in Alberta. The team found children who helped prepare food at home cared more about nutrition, made healthier food choices and were more likely to have a preference for fruits and vegetables.

I’m not talking about training children to ferment their own miso or roll fusilli by hand. I’m talking about steaming broccoli, something that is beyond the skill level of too many adults. Learning how to read a recipe, how to shop, how to budget and how to turn basic ingredients into nutritious meals are essential tools for being an adult human being. Kids need to know how to feed themselves and it’s possible to teach them how while folding in the math and literacy skills that are essential to cooking. We just need to spend public money on preventive food education instead of curative health care.

“I think there is a responsibility of government and society to invest in education,” says Dr. Jafna Cox, a cardiologist and researcher at Dalhousie University. “They’re the ones who have potentially the greatest impact on the development of cardiovascular disease, than anybody else. If you do not develop the habits, the tastes, the insight, such that it becomes ingrained behaviour, you’re going to be forever fighting a losing battle.”

In 2011, Ontario enacted a food and beverage policy that prohibits unhealthy foods and pop being sold in schools – which sounds great. But it’s just a tiny bit of what is needed. Cox was working in a Halifax hospital when a nearby high school removed its pop and fries. He remembers that the students just left the high school at lunch and walked to the hospital to eat burgers in its cafeteria. The happy part of the story is that this forced the hospital to overhaul its own food. But it goes to Cox’s argument that cutting out cafeteria junk food in high school is still addressing the problem too late.

“When they think of heart attacks or cardiovascular disease, nobody thinks about the lead-in,” Cox says. “So we put money into the health-care system. But the damage is already done.”