Have your kids made a mucky slide out of mud lately? How about watched two snails race very slowly? Have they ever eaten a crisp apple plucked right off a tree?

These are some of the 50 things that children should do before they're 11 and three-quarters, according to a new checklist compiled by the National Trust, a charity that looks after historic buildings, gardens and forests throughout Britain.

"Children are suffering from a lack of nature and outdoors," said Phil Harper, a spokesperson for the National Trust. "It's a real opportunity to engage kids again, and get them into the outdoors and really emphasize the pleasures there are."

The proposed activities on the bucket list are simple and cost little or nothing at all, making them especially attractive during this challenging economy. Chrissie Saunders, a Canadian who lives in Britain. and writes a popular parenting blog, has already done a lot of the activities on the National Trust's list (snail race, snow fights) with her four-year-old daughter. She says it's a good reminder that kids don't always have to structured play.

"We don't go outside as much as I would like," said Ms. Saunders. She remembers her childhood "being shoved out the front door and playing with all the neighbour's kids, riding bikes, making dens and making huge snow forts."

The list is sure to bring back happy memories for this era's overprotective parents, who had far more freedom than they will likely ever give to their children. According to a 2007 survey by the Children's Society, some 43 per cent of parents in Britain said kids shouldn't go out alone with friends until they turn 14. In contrast, many of these parents roamed their neighbourhoods without an adult at the age of 10 or younger.

"There's much more focus on the danger of being outside of the home," said Mark Hoelterhoff, a senior lecturer of applied psychology at the University of Cumbria in northern England, and father of three. "We're a bit more paranoid than we need to be."

Conversely, parents seem less concerned about how a couch-potato lifestyle is hurting their children. The World Health Organization has warned that obesity rates among kids are rising at an "alarming rate." A study published this month in the Archives of Pediatrics & Adolescent Medicine showed that half of preschool children in the United States don't go outside to play on a daily basis.

Along with keeping children fit, Mr. Hoelterhoff said research shows time outside in nature improves a child's ability to focus and concentrate, key skills for learning, and also reduces depression. "We know that when kids are outside they learn better," said Mr. Hoelterhoff. He says the list provides a "gentle reminder" to parents to make green play a priority, alongside other activities like ballet or hockey.

The need for more nature is striking a chord with some educators. Playgroups and kindergarten classes held in the forest, popular in European countries like Sweden, Germany and Switzerland, are now being set up in the U.K. and Canada. In Ottawa, for example, the Carp Ridge Learning Centre offers forest preschool and kindergarten, along with nature wilderness programs for older, home-schooled children. Jay Young, director of the Carp Ridge school, says they frequently get calls asking how to start such a group.

"Even kids out here in rural settings, we're not as encouraged as we used to be to go out and have fun in the forest and come back for dinner," Mr. Young says. "We're losing this side of things that I think is essential for every child's development.

Parents can provide an important example by turning off their gadgets and exploring nature again. A recently published book, Skimming Stones and Other Ways of Being in the Wild, provides detailed instructions on everything from foraging for food to lighting a fire.

"Kids can get back into nature; we have to help them get there," Mr. Young said. "I think if parents do more of these things with their kids, they'd enjoy it too."

Ms. Saunders and her family were looking forward to another nature adventure this past weekend with a camping trip.

"We're going to be able to slow down and actually spend some proper time together,"she said. "It may not be like being on a roller coaster, but I think it will be a lot more enjoyable as a family."

2. Roll down a really big hill

6. Run around in the rain

9. Eat an apple straight from a tree

12. Hunt for treasure on the beach

16. Bury someone in the sand

18. Balance on a fallen tree

21. Eat blackberries growing in the wild

26. Hunt for fossils and bones

29. Get behind a waterfall

30. Feed a bird from your hand

33. Catch a butterfly in a net

37. Check out the crazy creatures in a rock pool

38. Bring up a butterfly

44. Light a fire without matches

45. Find your way with a map and a compass

You're probably not taking your kids to the park enough, new study says
April 3, 2012 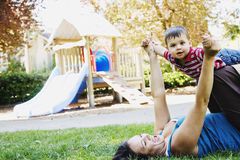 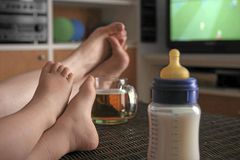 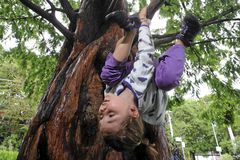