Chris Read hosts tea parties and fills party loot bags with his toddler daughter. He shows off battle scars from the glue gun that went rogue during a crafts session with his four-year-old son. He has trundled to Disney on Ice and donned a Toy Story costume in a (successful) bid to get the boy to eat his lunch.

"I'm willing to literally do anything," says Read, a government analyst who also mans the blog CanadianDad.com from Ottawa.

For Read, being an involved dad is the way to go; it's what his father did and what he hopes his children will remember him for. Still, his hands-on approach remains baffling to some in his community. When Read took his brood to the mall, a woman teased, "Oh, babysitting the kids today?" Sometimes, his buddies question why he spends so much time parenting instead of doing his "own thing."

"It's not hard to be involved with your kids – that's why you have kids," is Read's retort.

But just as we might look down on machismo, the "progressive" male – that guy walking along contently with his Baby Bjorn carrier and pastel diaper bag – sets some people off too. "A lot of the time, it happens behind your back and you only hear about it secondhand," says Read of this brand of man-bashing.

As the nature of fatherhood shifts with more men taking parental leave and staying at home outright, a discomfort festers, with "normal" dad behaviour often slotted into activities like hockey practice and bonding in the tool shed.

Still, Read understands the stigma: "We're still scratching the surface of fatherhood being widely accepted as something that we do as opposed to going to work, coming home, having a nap and taking the kid to hockey."

Good fatherhood is the new masculinity for "progressive" dads like Read. Fed up with the images of comical bumbling patriarchs that dominate advertising and pop culture, "daddy bloggers" descended on Houston last month for the Dad 2.0 Summit to meet with marketers about rebranding the incompetent-father stereotype. These men are building their own platforms with blogs like One and a Half Men, Natural Papa and Why is Daddy Crying?

December saw the launch of a Brooklyn-based magazine for fathers called Kindling Quarterly. In its inaugural issue, editor-in-chief David Michael Perez outlined the prejudice sincere fathers who "spend hours crafting homemade toys and costumes for their kids" face. "These fathers take on an air of almost mystical parenting capability," wrote Perez, who has a seven-month-old son. "Instead of being laughed at, they are dismissed as caricatures, their devotion too uncomfortable to be taken seriously." But Kindling takes these men seriously – a picnic-themed fashion spread featured expensive accoutrements and man totes.

"We want sensitive husbands, but only up to a point," says Kenny Bodanis, a Montreal father of two who runs the blog Men Get Pregnant Too and works full time in television as a sports producer and director. "We expect men to cry at movies like The Notebook, but we still don't want ignorance when it comes to home repair or finance, or weakness when it comes to protecting the family and the home."

Kindling's Perez agrees that men are still expected to always appear strong, a prospect that can chafe in their new, softer fatherly roles. "This imposition also means not being vulnerable or doing things outside of your emotional comfort zone," he says. "Actively engaging with a young baby isn't necessarily what we see when we we think of the traditional role of men and masculinity, but I think that's changing."

When Perez takes his infant son out solo for a walk, older women have been quickest to pounce. "It happened a few times when I was at the farmer's market and my son was crying, he needed to eat, I was balancing my bag. Women come up to me and say, 'Can I take your kid?' or, 'Do you need help?'" he says. "If my wife was in that situation, no one would ever come up to her and offer help. People mean well, they're not doing it to be malicious or rude, but it displays the annoying values there."

It was a similar scene for Robert Duffer, an editor at The Good Men Project, a progressive men's web magazine. Duffer, who has a 6-year-old son and 5-year-old daughter, joined a playgroup called Chicago Dads, visiting parks and the zoo with a half dozen other fathers and their children. As talk turned to sports and beer, "Invariably, there would be a woman, usually an older woman, who would say, 'Oh, I didn't know it was a holiday – all these dads here!' Seeing dads out with their kids on the weekend wasn't odd, but seeing them during traditional work day hours is still something that people are getting accustomed to."

It doesn't help that the doltish dad still features prominently in pop culture.

"The whole joke is that fatherhood doesn't come naturally, that we're fish out of water and don't know what to do. 'Where does this diaper go?' It's a prevalent idea, this Everybody Loves Raymond archetype who's very put out by domesticity, his wife and his kids," says Perez, pointing out that this belief system assumes that only women are natural caregivers.

Dads like Perez see parallels of their situation in women's shifting roles. "This is about a little bit more flexibility in the male identity," he says.

But there is a limit to the comparison: "We have a lot less ground to cover than feminists," says Bodanis. "Trying to be accepted while pushing a stroller doesn't really compare to getting the right to vote, but there's ground to be made up. It's going to be a slow, long haul." 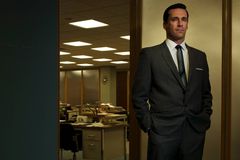 Men are becoming more involved with their children - with the help of other men
August 10, 2009 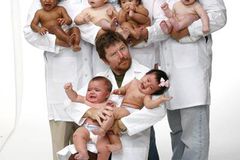 Do traditional fathers earn a daddy premium at work?
January 30, 2013 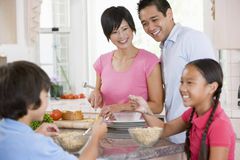