Wyatt Erber, 8, was crushed this summer when his two-year-old neighbour Cara Kielty was diagnosed with leukemia. He wanted to do something to help. So when his mother told him his bank was holding a summer-long scavenger hunt, with a grand prize of $1,000, the third-grader did not hesitate to sign up.

"Wyatt immediately said, 'I want to do it, and when we win' – because he's very much an optimist … – 'I want to give the $1,000 to Cara,' " his mother Noelle Erber said by phone from her home in Edwardsville, Ill.

To everyone's surprise (except perhaps his own), Wyatt did win weeks later and he made good on his pledge, handing over his hard-earned prize entirely to Cara and her family to assist with her medical treatment.

"It melted my heart," Erber says. "He's just always kind of been a sweet, caring kid."

Wyatt's story, which was picked up by national and international news outlets last month, sparked widespread awe and praise for the youngster's generosity. But to scientists studying the roots of human kindness and morality, Wyatt's instinct to help his neighbour is perhaps not so unusual. An expanding body of research suggests people's moral compasses are active far earlier than previously thought.

Young children and even babies demonstrate attributes such as generosity, empathy and a sense of justice, indicating that far from being born as clean slates, humans seem to have innate altruistic tendencies and are able to make moral choices at a remarkably young age.

For millennia, philosophers and religious thinkers have grappled with the fundamental question of whether humanity is inherently good or evil. Now, science suggests the answer is a bit of both. Psychologists are finding that humans start life equipped with both good and bad tendencies, but how we turn out is largely a result of our surroundings.

A new documentary airing tonight on CBC's The Nature of Things offers a fascinating exploration of this relatively new and growing area of research. Babies: Born to be Good? follows the work of researchers in Canada, the U.S. and China as they test children's inherent abilities to distinguish right from wrong.

Among the highlights, the program shows how three- and five-month-old babies react to characters of a puppet show at the lab of University of British Columbia psychologist Kiley Hamlin. The babies demonstrate a clear preference for puppets that share, instinctively grabbing for them or looking at them instead of the more selfish characters. The film also captures two-year-old Anastasia as she takes great pains to climb out of a tub full of toys to help Harvard psychologist Felix Warneken pick up a dropped paper clip. Anastasia does this spontaneously and repeatedly, each time he drops the paper clip beyond his reach.

And in a particularly endearing segment, the documentary shows how two-and-a-half-year-old Tang Tang struggles to deceive University of Toronto professor Kang Lee in a game of hide-the-candy. Tang Tang's inability to lie underscores the complex mental gymnastics involved in deception; it requires withholding the truth, recognizing that others do not know what you know, and inventing a lie – something most children do not master until between the ages of 2 and 4.

As the documentary's director and writer Eileen Thalenberg explains, this field of research extends beyond babies to the core of human nature. She has often puzzled over her own sensitivity to injustice. "When there is something unjust being done, there's something in me that I can feel it almost physically. And I wonder, where did that come from?" she says. "It's not like something that comes from any religion or from anything like that. It comes from something that's almost visceral."

She adds that this reaction is almost universal. "We get angry when people do bad things. We're happy when they do good things."

But if that is the case, why do children and adults behave badly toward one another? You need not look far to find instances of bullying, power struggles, and violence to recognize people have the capacity to be extraordinarily cruel.

It may be possible that some people are born with the potential to be particularly bad. Alison Gopnik, professor of psychology at University of California Berkeley and author of The Philosophical Baby, says some research suggests sociopaths and psychopaths may behave differently than the rest of the population at a very early age. As young children, for instance, they may not exhibit empathy when they see others in pain.

But, she points out, "the overwhelming majority of people who do bad things, including the overwhelming majority of the people who are in [Ontario's maximum security prison in] Penetanguishene, are not people who are showing signs of sociopathy." Rather, they are individuals who have given in to their less savoury instincts, such as aggression or selfishness. And unfortunately, she says, those negative tendencies are present just as early in life as many of the positive traits like helpfulness and kindness.

Through her research, Renée Baillargeon, alumni distinguished professor of psychology at University of Illinois at Urbana-Champaign, has found that people are naturally less compassionate toward "out-groups," or individuals who are different from themselves. Infants, for instance, prefer to share toys with their own teammates than with out-group members.

But depending on the situation, notions about who is "in" and who is "out" can change. Toddlers who observe in-groups and out-groups interacting with each other are less inclined to behave differently toward out-group members, Baillargeon's experiments have shown, offering hope for breaking down some of the barriers that prevent people from acting their kindest.

And people's moral compasses are not static; they continuously develop and change throughout their lives, Gopnik says.

Back in Illinois, Wyatt Erber has shown how adults can learn moral lessons from children too. His act of kindness has encouraged donors across the United States to open their wallets to help his little neighbour.

"I think it was great what he did. It says a lot about his character," Wyatt's mother says. "But the part that's been the most amazing to all of us is how he's kind of inspired other people."

Are babies born with an innate sense of fairness?
February 23, 2012 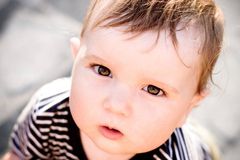 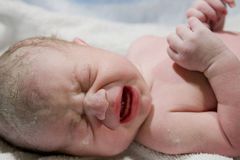 Facts & Arguments
Beautiful babies may not be attractive adults
November 8, 2011 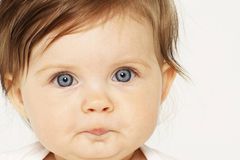