There's been a lot of talk recently about the dangers of overpraising children. Too much vague encouragement, many experts say, can give a child a surfeit of self-esteem and result in "special snowflake syndrome" (not yet included in the Diagnostic and Statistical Manual of Mental Disorders, but give it a year or two).

On the other hand, many parents simply don't praise good behaviour often enough or effectively. Allow me to boil about 20 years of parenting research down into one rule: If you want your kid to succeed, it's about quality and specificity of praise, not quantity. Praise effort over performance. Mention precise details to show you are actually paying attention (warning: this requires actually paying attention to your child). So instead of "Wow, this drawing is so brilliant it's blowing my mind!" say, "I really like your use of shading here. Why did you choose this green?" And for Pete's sake, don't tell little Tallulah she's going to the Olympics for doing a cartwheel. Just don't.

But now on to a much thornier and potentially marriage-imperiling issue: How should we best praise men?

There's no doubt men – and dads in particular – have gotten better in recent years. Men do more child-rearing and domestic work than ever before – most of the dads I know change diapers and cook the occasional cheese omelette while managing to hold down a steady job. But, as we all know (and as all major studies indicate), women generally still do much more – even though we all went out and got jobs around 1982, so the only reason for this is sexist horse poop!

This double standard has resulted in an irritating cultural quirk: our tendency to overpraise dads for doing everyday domestic tasks that moms are generally expected to do. Tasks like getting on the bus with a stroller. Or taking a day off work to stay home with a sick kid. Or feeding a baby in public. If a mom does these things, whevs. But if a man does them? Awwwww.

An amazing example of this can be found in a recent New York Times article, which ran this week under the headline "How Vital Are Women? This Town Found Out as They Left to March."

The piece, written by Filip Bondy, chronicled the weekend endured by the men of Montclair, N.J., an affluent suburb of New York. After the women left for the Women's March on Washington, the dads of Montclair were left to parent on their own.

What is surprising or remarkable about this – apart from the fact that millions of American women marched in support of women's rights? Nothing.

But that didn't stop the Times from covering the absence of the mothers of Montclair in a breathless tone usually reserved for communities rocked by natural disasters.

"In their wake, [the women] left behind a progressive bedroom community with suddenly skewed demographics. Routines were radically altered, and many fathers tried to meet weekend demands alone for a change. … Usually, these chores and deliveries were shared by both parents, in a thoroughly modern way. On this day, many dads were left to juggle schedules on their own."

The piece prompted much contemptuous hilarity on social media ("Alt headline: Area men spend time with own children," tweeted one reader), along with comparisons to a retrograde genre of anti-suffragette cartoons that featured beleaguered fathers coping with babies and housework while their feckless wives marched for the vote.

To the paper's credit, both The New York Times editor and the reporter responsible for the piece apologized within hours of its publication.

"We blew it," admitted Metro editor Wendell Jamieson. But this doesn't erase the fact that even a bastion of progressive liberalism such as the Times can fall prey to ludicrously sexist notions – like the idea that men taking care of their own children is grist for a major news feature.

The truth is most of us are guilty of overpraising men in this way. I remember meeting my husband at the station after he'd taken a two-hour train journey alone with our then-four-month-old baby and toddler. "How was it?" I asked. "Amazing!" he said. "Everyone was so kind and helpful. They gave us free snacks. I'm tempted to take the kids with me everywhere now."

And then, at the beginning of the school year, while I was in the hospital giving birth to our youngest son, Rob took James to his first day of junior kindergarten.

"The teachers said, 'Oooh, it's amazing he made it!' and then they practically lined up to kiss him," one mummy spy told me later with a laugh.

(Rob, it should be said, disputes this version of the events and insists "they were just very friendly, as they always are." But this might be his surfeit of dad self-esteem talking.)

In any case, we overpraise dads – and it's got to stop. So the next time your special snowflake partner puts in a load of laundry or picks up the kids from school, just be cool about it, ladies.

Say "Thanks, hon" – and leave it at that. Just act like everything is normal. Hopefully, in due course, it will be.

Leah McLaren: Why I'm bringing my four-year-old son to a Women's March
January 19, 2017 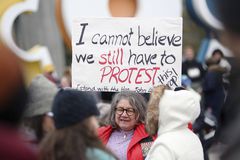 Leah McLaren: How to talk to your children about Donald Trump
November 9, 2016
Leah McLaren: Birth shaming is about controlling women, not helping babies
August 25, 2016 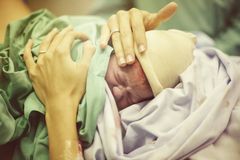