The classic Luther Vandross song Dance With My Father has always held a particularly significant place in my heart for the simple, evocative way it depicts a child's love for a father, entangled with longing and loss. For as long as I can remember, I have been a daddy's girl, and I expect I always will be. But I've also accepted one hard truth of adulthood: politics has built a wall between us.

As I grew up, my dad was a towering figure, as gentle as he was firm. All I have ever strived to do was make him proud of me. I won my first athletic award when I was about nine years old; just a small trophy, not much bigger than my palm, and yet he was so proud.

I heard his strong, steady clapping, sharply echoing through the crowd. I knew it was him, and from that moment on, all I wanted to do was make my dad clap with pride. That day, he drove me to the homes of all our closest relatives, so they could see my trophy. It was one of our best days.

I grew up in Zimbabwe, eating maize porridge mixed with peanut butter, running barefoot at track meets and catching grasshoppers and pulling off their wings. (I apologize, little hoppers.) My father was a journalist there, and his love for politics and global affairs was always evident.

During long drives in the car, he'd share his thoughts on world leaders behaving badly, national affairs and racism.

South Africa was a backdrop for lessons on colonial legacies, power structures and violence against blacks. In analyzing the continent's north, he would highlight the lack of black people in positions of power in Egypt, Libya and Eritrea. Maybe it's because I was the oldest, or the most precocious, but I cannot remember my dad talking to my three other siblings about race in as much depth and with as much regularity as he did with me. When I was charting my own career path, journalism seemed obvious. I have always loved the written word and had romanticized the notion of handing in drafts to editors and scrambling to make deadlines (a sentiment I've since abandoned). Here was something else my father and I could click on, something to make us even more alike.

I left Zimbabwe in 2010 to attend journalism school at Toronto's Ryerson University (also my dad's alma mater). My education was marked by stories of racial injustice, from the acquittal of Trayvon Martin's killer to African immigrants washing up on the shores of Europe as they escaped tyranny and war. My understanding and retelling of a narrative was personal, painful and inextricably linked to my layered identity: my blackness, my Africanness and my womanhood; plus my ability to come to Canada for school and whatever other privileges I was afforded.

I wrote about racism as a violent and intimate entity that the world supposedly finds intolerable, but that followed me around every day. Racism never affected me positively, so I wrote about it angrily. My approach became the fault that would shake up the San Andreas line between my father's hopes for me and my ambitions for myself.

My father did not clap when I wrote about Mike Brown, a black 18-year-old shot and killed by a white police officer in Ferguson, Mo., in 2014. I stated my opinion – that it's a voyeuristic impulse that leads Canada to watch the horror in the United States while patting itself on the back. He warned that no reputable news organization will ever hire me when I seem so combative.

"You can't write like this," my father said to me. He hated my use of language, finding terms such as "whiteness," "white supremacy," "white fragility" and "anti-black racism" too sensational. I felt like I had failed him.Worse, I thought that I had embarrassed him.

Racism affects our most intimate interactions: Intergenerational trauma, the psychological effects of slavery, continuing colonization and suppression are not simply academic ideas. They are experiences that scar black psyches and affect how parents and children interact.

In her 2005 book Race and Family, sociologist Roberta L. Coles examined how the structures of economics, demographics and history force minority parents to raise their children differently from their white peers. "Racial socialization involves the same tasks other parents must accomplish, plus the responsibility of raising healthy children within a society in which being of colour has negative connotations," she wrote.

A professor at Wisconsin's Marquette University, Coles summarized research on the effects of how parents talk to their children about race, arguing that the tone of those discussions profoundly affects the ability of children to successfully and safely navigate the world. Racialized parents must teach their children to be aware of the racial barriers that hinder their progress. And when children grow up and, perhaps, navigate those barriers differently, it can create rifts where before there was only love.

Those who choose to be vocal with their critiques are shushed by those who choose silence. Neither group is wrong; loudness is truth but silence is the safest option – the one most likely to ensure economic and social survival.

It stung badly when my father, my first and only reliable politics professor, said he did not like my politics, especially because he wasn't wrong to worry that my loudness might hinder my career. In an Ethics of Journalism class, a white professor said: "Yes, black people are targeted by police, but most crime happens in inner cities so it's more a case of wrong place, wrong time."

I reacted with stats, facts and rage. She advised me to be objective or I would never be able to call myself a journalist.

The reason behind my father's attitude is very simple – he is just being a dad. His reticence for me to publicize my political leanings is his way of trying to ensure that I am able to make it in this world. It's his way of protecting me.

If need be, I should write about racism as quietly and efficiently as possible: like ripping off a Band-Aid. The pain should only last a few seconds. After a while, it might be hardly noticeable.

My father has seen too much and thinks I can see less by talking less. He would rather his daughter swallow her tongue than face condemnation from people unwilling to face their bigotry.

But it's impossible for me to shy away from transparent and honest conversations about race. And although that now means tip-toeing around racial politics, and maybe not showing him every article I write, that separation has brought me closer to myself.

Daddy's girl has grown up into her own person. But she'll always have time to dance with her father.

Facts & Arguments
My grandparents were right to worry about the return of racism and hatred – but I haven’t lost hope
December 13, 2016 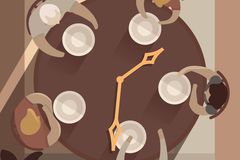 Facts & Arguments
My grandson is proud to be biracial, but I realize how vulnerable he is
September 12, 2016
Facts & Arguments
Of course I’m not racist. Am I?
September 5, 2016
Follow us on Twitter @globeandmail Opens in a new window
Report an error Editorial code of conduct
Due to technical reasons, we have temporarily removed commenting from our articles. We hope to have this fixed soon. Thank you for your patience. If you are looking to give feedback on our new site, please send it along to feedback@globeandmail.com. If you want to write a letter to the editor, please forward to letters@globeandmail.com.
Comments