For a nation that obsesses about hamburgers more than any other foodstuff, ranking them in minutely detailed top-25 lists, mobbing cult-status burger joints, and grilling homemade patties by the millions on summer long weekends, Canadians aren't so hot at actually making the things.

One hundred and twenty-odd years into the burger's history, we've complicated them nearly beyond recognition. Everyone has a supposedly brilliant hamburger trick.

Some cooks add breadcrumbs, eggs and milk as if they're making meatballs, or dump in herbs and garlic powder. Others add chopped-up bacon (totally unnecessary), or swear by those "extra juicy" patties you can get in the freezer aisle (I've never had one that didn't taste like Naugahyde). Worse still, millions of cooks struggle against all good sense to make reduced-fat versions. Nobody has ever made a satisfying hamburger from extra-lean ground beef.

I've even seen burgers goosed with short ribs, foie gras, anchovy paste and cubes of jellied veal demi-glace – great ideas if you like hamburgers that taste like short ribs, foie gras, anchovies and veal collagen. But if you want a burger that's deeply, unambiguously beefy, seared to sizzle-crisp on the outside, and sloppy with chin-dripping beef juice, the trick is that there is no trick.

Great burgers are simple. Anybody can make them. All you need is five basic rules and a piece of equipment that costs about the same as a decent toaster. So read on. We've even included a recipe. And we're willing to bet it's the greatest hamburger of your life.

Nothing will make your burgers better, faster, than buying whole cuts of meat and grinding them at home. (See how-to tips at the bottom of the story.) When you have your own grinder (a good standalone version costs less than $100; the $60 Kitchen Aid mixer attachment is also excellent) you can use tough, inexpensive and hugely flavoured cuts like flatiron or flank or even heart, and blend them with chuck or brisket. When you grind your own, you know what you're getting: meat from just a couple of animals, as opposed to the scraps from thousands that can go into a single batch of industrially processed stuff. (And no pink slime, thanks.) Your chances of contracting e-coli are much, much lower with home-ground stuff than supermarket ground, in other words, so you can cook your burgers to medium with a little more confidence. (But be advised: Public-health types still insist that ground beef isn't 100-per-cent safe until cooked to over 160 degrees.)

A fatty burger is a tasty, juicy burger. The ideal blend contains between 20- and 25-per-cent fat. Chuck typically has about that much, while leaner cuts like the flat end of a brisket or a well-trimmed heart can have a lot less. The best way to get it right is to tell your butcher what you're looking for, or failing that, just eyeball it. And if you're using only lean cuts, ask for a little extra fat that you can chop up and add to your mix.

It's a truism that bears repeating: One of the greatest differences between home cooks and professional cooks is that professionals use a lot more salt. Use kosher salt or sea salt and apply it aggressively: Rain a fat-fingered pinch over either side of thinner patties, or if you're mixing it into a bowlful of beef and you're typically reticent with the stuff, put twice as much as usual and fry up a marble-sized ball to test. (Perfect salting doesn't make beef taste salty; it makes it in-your-face beefy.) And if you're the sort of person who gets all bothered by the instruction "use more salt," relax, already. No one's suggesting you should eat these every day.

To form a patty, pick up a loose ball of beef and gently slap it on either side and around the edges until it's slightly wider than your hamburger bun. Don't over-compress it. And if you like a big burger, consider stacking two thinner patties rather than building one monstrous one. Thinner patties are easier to cook, and two patties means double the surface area, so you get twice as much of the crusty, caramelized sear. Pro tip: Weigh out your patties with a kitchen scale so they're all equal; they'll cook at the same speed that way.

If you're cooking straight on a grill, start directly over medium-hot coals or gas (any hotter gets you flare-ups), sear on both sides, then move the patties off the heat and close the lid until they're done. Even better, put a cast-iron pan directly on the barbecue over high heat, close the lid, let it heat to nearly smoking, then drop in your patties and close the lid again, opening only to flip your burgers. Barbecue + pan = crust-forming, high-heat sear and smoky barbecue taste.

Cut the beef into 1-inch thick strips, toss to combine and chill on a cookie sheet, uncovered, in the freezer for 30 minutes. Process chilled beef through the fine (1/8-inch) plate of a well-chilled grinder.

Divide the beef equally into eight four-ounce balls (a kitchen scale is perfect here if you have one), and form them gently into patties slightly wider than the buns. (Nobody likes a bite that's all bun.) Rain a generous pinch of kosher salt liberally over both sides of each patty, dropping it from high up so it coats the burgers evenly.

Heat a 12-inch cast-iron pan over high heat, drop four patties into the pan and start a timer. If you're using a barbecue, close the lid. After two minutes, flip the burgers. Put a couple slices of onion and a slice of cheese on two of the patties, just cheese on the other two. Close the lid again. If you like your burgers medium, they'll be done in another two minutes. If you like them cooked through, give them 2-1/2 to three minutes.

Stack a finished patty with cheese on top of a finished onion and cheese patty, place on a bun and let them rest for about a minute if you can bear it. Repeat with remaining patties. Serve with bread and butter pickles, ketchup and mustard. Serves 4.

How to use a meat grinder

The key to grinding meat at home is to make sure everything's cold. Put all metal grinder parts, including the blade, the grinder plate and the long metal corkscrew piece into the freezer at least a couple of hours in advance. Cut your meat into one-inch cubes or strips and chill them in the freezer, uncovered, for about 30 minutes.

For burgers, a fine (⅛-inch) plate is ideal. Toss the meat so it's well combined, feed it through the grinder once, and you're good to go. 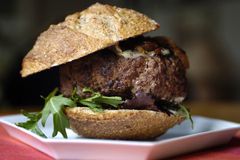 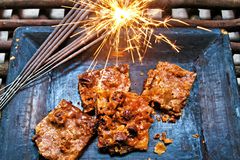