Todd Houston has an image problem. While he spends hours reading books to his two young sons, his role in family life is not reflected in them.

"All the one-word See Spot Run type of books tend to be very, 'Here's what dad does. He's got a hammer,' " the Calgarian says. "Whereas we joke that, in our family, on the weekends my wife cuts the lawn and I'm the guy inside doing laundry."

Mr. Houston is a stay-at-home dad to Theo, 8, and Charlie, 5, while his wife, Jen, works full-time in the oil and gas sector. He remembers reading a book in the Fudge series by Judy Blume in which a mom goes away and the household goes awry. "My boys were killing themselves laughing, like, 'Imagine a dad that can't cook.' "

While children's books illuminate everything from gay parenting ( Heather Has Two Mommies) to blended, stepparent and other iterations of family life, they have been slow to reflect the generation of dads that take paternity leaves, actively co-parent, or choose to stay home with the kids – a sector that is growing. According to Statistics Canada, men now account for 12 per cent of stay-at-home parents, compared with 4 per cent in 1986.

Yet in the majority of literature, moms are depicted as the nurturer and dads as the breadwinner/handyman. Read almost any picture book and it's like you're travelling back a half century.

"In all my hours of reading [with the kids], I've never come across a book where the father is staying at home and the mother is working," says Tim Kelloway, a Toronto stay-at-home dad to three children under 5. "If dad's in the book, he's always coming home from work or something like that."

Mike McPhaden, a Toronto screenwriter who shares custody of his eight-year-old son, would like to see more themes that reflect the kind of dad he wants to be. "Is daddy as loving a parent as a mom? Does daddy cook? Does daddy clean?" are the themes he looks for, he says.

Mr. McPhaden is a fan of the board book Guess How Much I Love You, which depicts a loving conversation between a bunny and his son; the kind of book that can counteract stereotypes. "The dad in Diary of a Wimpy Kid is hyper-masculine and threatening to send him to a military academy. [That's not] the kind of dad I am."

Mr. Kelloway feels that the lack of books about stay-at-home fathers speaks to people's conventional attitudes toward child-rearing. "It is changing, but I'm still a pretty huge minority. I go to the park and I'm the only guy and there," he said. "Yesterday, I got heckled. … I was walking down the street, I had my two girls in the stroller and the boy was in a carrier, and the guy said, 'Where's the mom?' "

Parenting books, magazines and children's literature all revolve around "the continued primacy of the mother," says Kerry Daly, dean of the College of Social and Applied Human Sciences at the University of Guelph and a lead researcher on father involvement. "When things go wrong in the home, we tend to hold mothers responsible. When families run into financial trouble, we tend to hold men responsible," he says. "We're aware of those carry-overs and readily call them stereotypes, but we still struggle with them."

It's vital that the changing role of the father be depicted in kids books, says Andrea Doucet, a professor of sociology and gender studies at Brock University in St. Catharines, Ont., who holds the Canada Research Chair in Gender, Work and Care. "Ideologically, that's where these ideas get lodged about gender and how [children] think about themselves as gendered beings," she says. "I think it's incredibly important that they see it in early books and the action books that they read later on."

San Francisco-based Jeremy Adam Smith, a former stay-at-home dad and co-editor of Rad Dad: Dispatches from the Frontiers of Fatherhood, says he used to blog about children's books that showed the father as the primary caregiver. But he stopped because "there weren't enough books."

"We'd like to think we're somehow immune to that [message], but we're not."

A 2005 study out of Centre College in Danville, Ky., of 200 children's books showed that fathers appeared about half as often as mothers. Mothers were 10 times more likely to be depicted taking care of babies than fathers, and twice as likely to be seen nurturing older children.

A 2011 British study out of the University of Brighton of 160 preschool-aged picture books had similar findings, concluding that "fathers were significantly less likely to appear than mothers, to be mentioned by characters or narrators, to appear with their children, ... to be portrayed as expressing any emotion or to be involved in any kind of domestic activity."

Karen Li, senior editor at Kids Can Press, says that while the Canadian publisher doesn't offer titles that show dads as primary caregivers, their books do present images of working dads in nurturing roles, such as in the Franklin the Turtle series. "The depiction of fathers in children's books will undoubtedly continue to evolve as the roles of men and women evolve at work and at home. However, this would not be a driving force in our acquisitions or sales," she says, adding that they tend to focus on child-centred books that frequently don't depict parents at all.

Mr. Daly points out that, despite the dramatic change in the family unit, parents are still attracted to popular children's books that have been around for 30 or 40 years – perhaps because they evoke an earlier time.

"There's a nostalgic yearning for a family with simple roles and a simple past where things fit together easily and nicely," he says. "And that sort of competes with our other talk about … wanting to represent diversity in families."

My Daddy and Me

This board book shows kids and their dads hanging out and having fun, whether they're playing hide and seek or splashing in the rain.

In this picture book, a working dad returns home to find his family asleep, except for his baby. He cuddles and sings to his child, lulling them both to sleep.

Trixie spends the day happily doing errands with her father, but the good times stop when she realizes her favourite toy is missing. (The author wrote this book after quitting his job as a TV producer to spend more time with his young daughter.)

Danny, The Champion of the World

A widowed father and his son embark on adventures in this classic chapter book for school-aged children. ("I had very rarely read this kind of thing, where it really zeroed in on the essence of the father-son relationship," former stay-at-home-dad Jeremy Adam Smith says.) 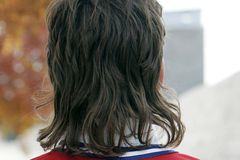 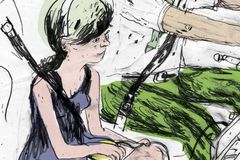