A growing number of parents are delaying or outright refusing to immunize their children, a troubling trend experts fear will cause future outbreaks of preventable diseases, such as measles, mumps, and even polio.

Figures released by the U.S. Centers for Disease Control and Prevention at a pediatrics conference in Vancouver this week confirm that fewer parents are keeping their toddlers up-to-date on their vaccines. Researchers found that 39 per cent of parents refused or delayed at least one vaccine for their child in 2008, compared to just 22 per cent in 2003. The findings are based on data collected from nearly 9,000 U.S. children between 19 and 35 months old that were included in the CDC's 2008 national immunization survey.

"[The numbers]were higher than I would have thought," Lance Rodewald, director of the CDC's Immunization Services Division, said in an interview.

It's a serious issue that could have grave consequences. As vaccination rates begin to drop, risks of disease re-emergence start to increase because the population no longer has "herd immunity." For instance, when whooping cough vaccination rates dropped in Britain in 1974, it led to an outbreak that eventually killed 36 people, according to Health Canada.

There are no national standards for collecting or reporting immunization rates in Canada. Although the Public Health Agency of Canada does collect information from local and provincial governments, it says it's difficult to get a clear picture of vaccination rates because of inconsistent data-collection methods and other challenges. Some experts say immunization rates are high across Canada, but there is concern that the backlash against vaccines in recent years may undermine public health efforts.

It's recommended that children receive a variety of vaccines in their first few years of life, such as diphtheria, tetanus, poliomyelitis (polio), mumps, measles, rubella and haemophilus influenzae type B (Hib) vaccines. Some may be administered a few times over the course of months or years. The introduction of these kinds of vaccines has helped to significantly reduce the occurrence of illness and disease. For instance, before the polio vaccine was introduced in Canada in 1955, the disease was fairly widespread and caused thousands of cases of irreversible paralysis.

Although misconceptions about the link between vaccines and autism and fears over side effects have become more widespread, particularly during the H1N1 pandemic, those concerns only partly explain the growing reluctance to immunize. Researchers found that 44 per cent of parents in the study who delayed or refused shots did so because their child was ill. Parents were allowed to give more than one reason in the survey.

Dr. Rodewald said it's usually safe for children to be vaccinated if they have a mild illness, but many doctors and parents prefer to avoid it. The problem is that parents may forget to bring the child back for the shot, and the child can be at risk of contracting a disease later in life, Dr. Rodewald said.

More troubling are the numbers of parents who reported safety fears: Nearly 30 per cent said they delayed or refused immunization because they thought too many shots were being recommended, while 26 per cent said they questioned the effectiveness of vaccines. Another 24 per cent said they had concerns over vaccine side effects or safety.

But perhaps most disconcerting is that one-quarter of parents said they were avoiding vaccines because of fears over their link to autism, a misconception that is proving to be one of the biggest challenges in keeping population-wide immunization rates high.

The link between autism and the MMR (measles, mumps and rubella) vaccine was reported in a study published in prestigious medical journal The Lancet in 1998. It was based on 12 children and relied heavily on the parents' memory of events following vaccination to reach its conclusions. Many of the families were involved in a class-action lawsuit against the vaccine makers.

The study was formally retracted by The Lancet last February, but many say the damage is extremely difficult to repair.

In the aftermath of the study's publication, MMR vaccination rates dropped, particularly in Britain, and led to outbreaks of illness in that country, including some cases that were fatal. Sporadic outbreaks of measles, mumps and rubella have occurred across Canada in recent years.

It's difficult to prove whether or not vaccine fears are leading to lower immunization rates and causing Canadians to be vulnerable to these preventable diseases. But experts say recent outbreaks demonstrate the serious consequences of snubbing vaccines.

Communicating those risks to parents is a challenge, however, because most don't recognize the potential for vaccine-preventable diseases to re-emerge, said Allison McGeer director of infection control at Toronto's Mount Sinai Hospital.

"I think it's a really significant issue," Dr. McGeer said. "We're well into a generation of parents who have not seen these diseases. … As a parent, you don't get a sense of threat about these diseases, and that makes vaccine safety much more important." 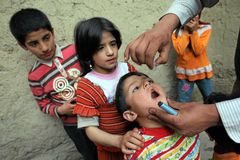