Ms. Badali was in her first year of a psychology degree at the University of Toronto - a program she'd chosen blindly the night before the applications were due, feeling rushed by her teachers and wanting to please her parents. Sniffy was just a computer rodent, but fumbling through her assignment to shock him until he completed a task, she realized she'd made the wrong choice. She didn't want to be a psychologist, she didn't like feeling like a number in an overcrowded university class, and she despaired at her dismal grades. "I know it wasn't for me," she says. "I had no idea why I went to school. My head was all over the place."

She broke the news to her surprised parents at the end of her first year: She wasn't going back. "I held her in my arms and said 'This is not a setback at all,'" recalls her mother, Claudia. "'This is an opportunity for you to try something else.'"

Taking a break from school, in fact, could end up being the best thing Ms. Badali ever did. "I feel like a lot of pressure has been lifted off my shoulders," she says.

In Europe, the gap year - a year off before higher education - is an accepted, and expected, rite of passage. In North America, however, the traditional student track has long been to graduate from high school in June, and arrive at university in September. But amid concerns about persistent dropout rates, researchers say that many students who follow the straight-to-university path find themselves trapped in programs they don't like, burdened by debt and are more likely to quit. The pressure to get to class quickly is shortsighted, experts suggest, especially with recent studies suggesting increasing levels of anxiety - and, according to tests and interviews, little actual learning - among first-year students.

More than 80 per cent of Canadian high-school students will eventually go on to some form of post-secondary education - with about 30 per cent taking more than four months off in between, according to a 2008 Statistics Canada study. Saving money was the most common reason, and student from low-income families were more likely to delay school. Upon graduation, however, a Canadian Council of Learning study found that students who took a gap year were eight per cent more likely to be employed (possibly because of their work experience). They also earned about $85 less per week than graduates of the same age who went straight through - though this was likely because they'd had less time in the workforce post-university.

A significant portion of students also shift paths after arriving on campus. One 2008 analysis of Statistics Canada data conducted by Queen's University researchers found that, of the 18 per cent of university and college freshman who dropped out in their first year, nearly half had either switched schools or eventually returned. In fact, many students zigzag through school, with only 54 per cent of students graduating from their original program within five years.

Especially when their parents have university degrees, the majority of stalling students eventually head back to school - ideally when they're less likely to drink away their students loans and more likely to find a career they love.

"Your child will not want to flip burgers or stock shelves forever," says Michael Ungar, a professor of social work at Dalhousie University who specializes in youth issues. "If they have any desire for a middle-class lifestyle, they will have to pursue a post-secondary education."

Dr. Michael Ungar and his wife Cathy Campbell, an adult education researcher and career counsellor for the province of Nova Scotia, have completed a recent project interviewing 20-something Canadians now in the workforce about the different paths they took after high school. They discovered that many of the students who choose to work or travel first entered university with more specific goals, wasted less money and found a real calling. Even those students who appear to be drifting often landed, sometimes by luck, in a field they liked. And the results for high-achieving students who went right into university also weren't clear-cut: Some ended up trapped in programs or headed toward careers they didn't like.

Parents need to see their children as individuals, says Dr. Ungar, who has two teenagers. He expects that his daughter, now in grade nine, will want to go straight into university, though he worries about her having enough life experience. His son, on the other hand, is less clear about his future goals: "I'd rather given him $5,000 to travel than pay $15,000 for him to go sit in a university and drift between classes."

More universities in Canada allow, and even encouraging, gap years for admitted students; they will even hold their scholarships. "We are trying to say it's more than a deferral," says Kenneth Withers, the director of recruitment at York University. "We are really encouraging students to do something with their time."

These are students who typically seek out Julie Newton, a life coach in Toronto and the co-owner of mygapyear.ca, who helps plan a year of travel, work and schooling for youth typically trying to figure out what to do next. "The thing I notice about this generation is that, if they are bored, if they think they are not getting anything out of it, they'll leave, they will walk out," she says. But there's still a stigma to changing gears, Ms. Newton says: "Often they feel like crap because it didn't work out. They don't see it as a learning experience.

Ms. Badali, one of Ms. Newton's clients, is currently working two jobs, as a receptionist as a hair salon and as a tester at LCBO on the weekends, and saving up for a two-month study trip to Paris. "It would not have been positive if she'd buried herself under the covers and done nothing about it," says her mom. "Now is the time to change your mind. Just don't give up."

Daniella is already planning her next step, perhaps studying French and dance with the aim of becoming a teacher. "If you are feeling rushed, definitely take the year off - it's not a bad thing," says Daniella. Even if it means starting over in school? "I don't care," she says. "At least I'll know what I am doing there." 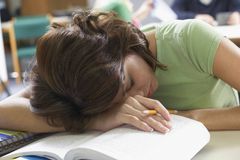 Today's college kids are 40-per-cent less empathetic, study finds
June 1, 2010
Follow Erin Anderssen on Twitter @ErinAnderssen
Report an error Editorial code of conduct
Due to technical reasons, we have temporarily removed commenting from our articles. We hope to have this fixed soon. Thank you for your patience. If you are looking to give feedback on our new site, please send it along to feedback@globeandmail.com. If you want to write a letter to the editor, please forward to letters@globeandmail.com.
Comments