Candace Derickx knew things were grim when she found herself wondering whether she could bleach her daughter's Duo-Tang.

The Ottawa mother of two girls, 5 and 7, had already bought pens, pencils, binders – almost everything on the teacher's back-to-school list. But after a full day of shopping (and trying three other stores) she ended up at yet another big box chain – staring at a wall of black folders. She needed grey ones.

"You start wondering, 'Is this going to affect my child's learning?' Which is ridiculous. But you want to meet the teacher's specific demands," she says. "Back in the day, I brought a pencil, a backpack and a lunchbox ... I love shopping, don't get me wrong. But there are a million other things I'd rather be doing than searching for Duo-Tangs."

She's hardly alone. Thanks to ongoing classroom cuts, the list of must-have supplies keeps on growing – new this year at one school: photocopy paper – along with parental anxiety. And don't forget annual rituals like pushing overloaded shopping carts through crowded chain stores in the hunt for the perfect pre-teen jeans.

What to buy and what to skip? How to fit in all that shopping before your kids are even back to school?

Ms. Derickx and her friend Laurie St-Julien went further than most in their coping strategy. They not only rethought how they shopped – they started a business shopping for other harried parents.

Their website toolsforschools.ca (where Ms. Derickx's Duo-Tang experience has become part of company mythology) partners with a number of public and private schools across Ontario to post supply lists for parents.

They can print them off, or just click and order – supplies are delivered directly to kids' schools, no binders forgotten on the kitchen table on the first day, and $4 from every kit goes toward school fundraising efforts. There's also an option to donate extra kits to the school for students who need them.

Kits range from about $25 to more than $100, depending on the school and grade level. Ms. Derickx says some parents do balk at the price (and some of the odd items, like baby wipes), but that most are understanding.

"Parents get that there are budget shortfalls," she says. And having the teachers pay for it themselves is not a solution either, she adds.

But not every parent can access outsourcing. Michelle Davies, a mother of two from Calgary who runs the blog everythingmom.com, says schools are getting increasingly specific – think six packs of glue sticks, three highlighters (blue, yellow and green), binders in widths of one and two inches – which makes for multiple shopping trips, and multiple headaches.

"You can't get everything at one store, that's impossible," she says, adding that even the so-called one-stop shops are always out of something.

Her coping strategy: organization and conquering one thing at a time. She's already done her basic pen and paper shopping, plus the recently added back-to-school list items like facial tissue and folders with multi-coloured tabs in specific hues. Next up: indoor and outdoor shoes.

At least Ms. Davies doesn't have to worry too much about school clothing. Her children, 6 and 8, wear a uniform: $358 for the year. Not bad, she says, for no fashion hassle.

But many public-school parents, like Karen Percy, a mom and graphic designer from Vancouver, still have to mix and match outfits – and decide on when closets are full enough without those extra trips to the mall.

Her six-year-old son likes to dress himself head-to-toe in cartoon cars or action figures, Ms. Percy says, which can get expensive (and a bit gaudy). Her four-year-old daughter Scarlett is "a little fashion diva."

Ms. Percy admits that, as a designer, she can't help indulging her kids' creativity – sometimes. When Scarlett put on a fashion show from her closet, though, trying on 10 dresses in preparation for the upcoming school year, Ms. Percy realized she probably didn't need to buy her daughter anything more.

"I took a few dresses away and told her she has to appreciate the things she does have before we go shopping," she says.

The same thing goes for school supplies, says Ms. Percy, who estimates there are five working markers left in a brand-new pack of 64.

It often comes down to an argument about which items are must-haves, and which are excess. If her kids want new things, they have to respect their belongings, Ms. Percy says. Sometimes, saying no is the best strategy.

Turns out even moving out of the country doesn't get you out of the back-to-school frenzy: Ms. Percy's husband was just transferred to Montpellier, France, so this year, her routine includes "Googling phrase translations for 'looking for markers' on my iPhone," and racing to stores before they close at 7 p.m., or on Sundays.

"Wal-Mart and Target sound like heaven right now," she says.

As for the mompreneurs? Well, even running a school supplies business doesn't guarantee you've found the best coping strategies. Ms. St-Julien and Ms. Derickx are still stressed out at back-to-school time.

"I'm condemned to school supplies for the rest of my life now," Ms. Derickx says. "That's the irony."

Hit the stores after bedtime at a late-night or 24-hour chain. Without the kids, it will be quick and painless, and the store will be less crowded.

Kids can still help pick their own items – but temper tantrums are contained at home.

Make a deal with another family: Drop the kids off at one house while the other braves the stores – one babysitter, one personal shopper (most parents are both).

If your grade-schooler wants a Twilight backpack, and balks at the plain, durable one that will last all year, ask her to pay the difference. See just how much a crush on Edward is worth.

Here is a sample of supplies that some schools have asked parents to provide for each child:

10 Duo-Tangs, each a different colour (some as shade-specific as "dark blue') 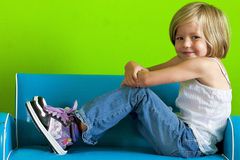 How to finance a post-secondary education
August 19, 2010 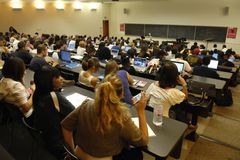 Is your child’s backpack too heavy?
August 30, 2010
Follow us on Twitter @globeandmail Opens in a new window
Report an error Editorial code of conduct
Due to technical reasons, we have temporarily removed commenting from our articles. We hope to have this fixed soon. Thank you for your patience. If you are looking to give feedback on our new site, please send it along to feedback@globeandmail.com. If you want to write a letter to the editor, please forward to letters@globeandmail.com.
Comments