Man, aged 56 and diagnosed as infertile, meets woman, 44. Birth control isn't part of their whirlwind romance - and they get pregnant before you can say "oopsy baby." Inconceivable, right?

Well, not quite. That's how a baby girl was born to Laura Arpiainen, a Vancouver architect, now 46, and her partner, an interior designer. Their 14-month-old daughter was a "gift out of nowhere," Ms. Arpiainen says.

The first-time mother wasn't trying to conceive, she adds, and her periods were irregular for several months before the pregnancy. "I thought I had menopause."

Fertility clinics may be crowded with women older than 35, but a 40th birthday doesn't automatically rule out pregnancy.

The truth is, almost 40 per cent of pregnancies in women over 40 are unintended, according to the Guttmacher Institute, a New York-based non-profit research centre that tracks reproductive trends.

Despite their years of experience with the birds and the bees, women at this stage of life may play Russian roulette with birth control, doctors say.

"Some women over 40 can get sort of sloppy [with contraception]because they don't think they can get pregnant," says Wendy Wolfman, an obstetrician-gynecologist at Mount Sinai Hospital and an associate professor at the University of Toronto.

In many cases, it's a reasonable assumption. Just 16 in 1,000 women over 40 become pregnant, the Guttmacher Institute reports.

Those who do become pregnant face a miscarriage rate of about 50 per cent, experts say.

Although the number of live births for older mothers is on the rise, their fertility rate remains low. According to Statistics Canada, there were seven births for each 1,000 women aged 40 to 44 in 2006, compared with three for each 1,000 in 1981.

But beyond the numbers are healthy babies who become late additions to the family.

Shelli Wakefield of San Jose, Calif., says she went off Depo-Provera, an injectable contraceptive, after her doctor told her it was "very unlikely" she would become pregnant again at age 41. Fourteen months later, Ms. Wakefield conceived her third child.

She and her husband were shocked, she says, but neither was upset about having their "surprise baby," now six months old. "It's neat to have another chance at parenting," Ms. Wakefield says.

Her 11-year-old daughter was delighted to be a big sister, she adds, but her 14-year-old son was less enthusiastic about the baby girl. "The hardest part for me is making sure that she's not a detriment to my older kids' lives."

Ms. Wakefield says she's a calmer parent than she was when her eldest kids were infants, in part because of improved finances and her stable marriage of 17 years. But with maturity comes the reality of aging. "I get my Botox so I don't look like an old mom," Ms. Wakefield says, "and I work out every day and I dye my hair."

Some women do not welcome a new baby later in life. Message boards such as Pregnant after 40 on iVillage.com are punctuated with announcements along the lines of "Pregnant and not thrilled."

An unwanted pregnancy can be a bitter pill to swallow for women whose values prohibit abortion or giving up a child for adoption.

Debbie Coolidge had grey hair and a teenaged son when she got pregnant at 45. The Texan mother felt like a "freak" and a "geriatric mother," she writes on Surprisemomsover40.org, a website she founded as a Christian-centred support for women who thought their childrearing days were over.

The site includes a top 10 list of challenges facing older mothers, such as being out of sync with friends who are enjoying empty nests after the kids have left for college. In the forums section, women trade tips on how to break the news to family members or deal with having a baby who is younger than a grandchild.

In cities such as Toronto and Vancouver, however, moms over 40 wearing BabyBjorns hardly stand out. The average age of a first-time mother in Vancouver is now over 30, according to Robert Anderson, an obstetrician-gynecologist at St. Paul's Hospital in that city. He adds that doctors no longer classify women over 40 as having high-risk pregnancies simply because of their age.

Marta Becker of Vancouver says she had a complication-free pregnancy and home birth at 44.

Before her unexpected pregnancy, Ms. Becker says, she was absorbed by her career and rarely gave motherhood much thought.

The birth of a son almost 10 months ago altered the course of her life, as well as her relationship with a man 11 years younger, she says. Although they were happy together, they had no long-term commitment, "so the pregnancy definitely made a big impact."

Her partner, a full-time student, was "stunned" by the news, she adds, but he quickly adjusted to fatherhood after the baby was born. "He's crazy in love with this kid."

Women such as Ms. Becker say they're careful not to boast about getting pregnant over 40 without trying. They have too many acquaintances who long for children.

Dr. Wolfman says that in her gynecology practice, she sees both extremes. "You have women who feel that they're over the hill at age 40," she says, "and women who think they'll be fertile forever."

She cautions women not to derive false hope from spontaneous pregnancies in women approaching menopause. At that age, few conceive babies without lab assistance. And aside from avoiding smoking earlier in life, she adds, there is nothing a woman can do to improve the viability of her eggs.

Even so, fertility over 40 isn't an exact science. Experts advise women to use effective birth control - or be prepared to celebrate the unexpected.

Ms. Arpiainen gave birth at 45, a few years after having surgery for endometriosis and a tumour in her uterus. Today, Ms. Arpiainen says, she's basking in her new life with a partner and toddler. "It's just been love and joy all over." 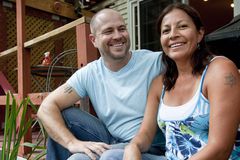 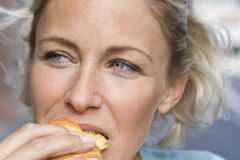 When the biological clock runs out
September 1, 2009

Follow Adriana Barton on Twitter @AdrianaBarton
Report an error
Due to technical reasons, we have temporarily removed commenting from our articles. We hope to have this fixed soon. Thank you for your patience. If you are looking to give feedback on our new site, please send it along to feedback@globeandmail.com. If you want to write a letter to the editor, please forward to letters@globeandmail.com.
Comments